To most of us, the words 'listed building' conjure up images of beautiful houses, palaces or grand public buildings created in a traditional style. But they don't all have to look like that.

The idea of statutory protection for Britain’s most beautiful buildings traces its roots back to the Ancient Monuments Protection Act of 1882,.

And while the beautiful old manor houses and grand town halls still get protected status, there are plenty of somewhat more surprising buildings on the list. Anything over 30 years old is eligible, so long as it fulfils the criteria – and if it is considered in danger, buildings even younger than 30 years can be listed.

Historic England, Historic Scotland, Cadw and the Northern Ireland Environment Agency presently in charge of deciding (on behalf of the department for Culture, Media and Sport) which buildings need protecting, and to what degree.

There are extraordinarily in-depth guidelines on listed status – see the rules for England on Historic England’s website –  but age and rarity are of course key. All pre-1700 buildings are now listed, and most pre-1840 buildings are also listed.

After that, the abundance of surviving buildings means that listing is much more selective; ‘particularly careful selection’ is used post-1945; and, as historic England puts it, buildings newer than 30 years are only listed if they are ‘of outstanding quality and under threat’.

Will these newer buildings be featured in Country Life? Only time will tell, but we’ve taken a look, with input from listed building insurance specialists Lycetts, at some of Britain’s most interesting and newest listed buildings.

And if some of these entries don’t impress you? Remember that Guy de Maupassant called the Eiffel Tower ‘useless and monstrous’ upon its completion, New York’s Guggenheim Museum was locally known as ‘the toilet bowl’ for some time, while courtiers openly questioned King Ludwig II’s sanity when he built Neuschwanstein.

It’s rare for a 30-year-old building to earn listed status but even rarer for one to make the list before its 20th birthday – yet that’s exactly what happened to No 1 Poultry, in the heart of the City of London. It remains England’s newest listed building.

James Stirling and Michael Wilford’s design was completed in 1998, and was made a listed building last November – given the pace of development and re-redevelopment in the city, Historic England clearly thought it necessary to step in to prevent this modern gem from being bulldozed and turned into yet another glass and steel box. The organisation praised it as ‘a highly significant late work by one of Britain’s foremost post-war architects, which expresses Stirling’s singular approach to design’ 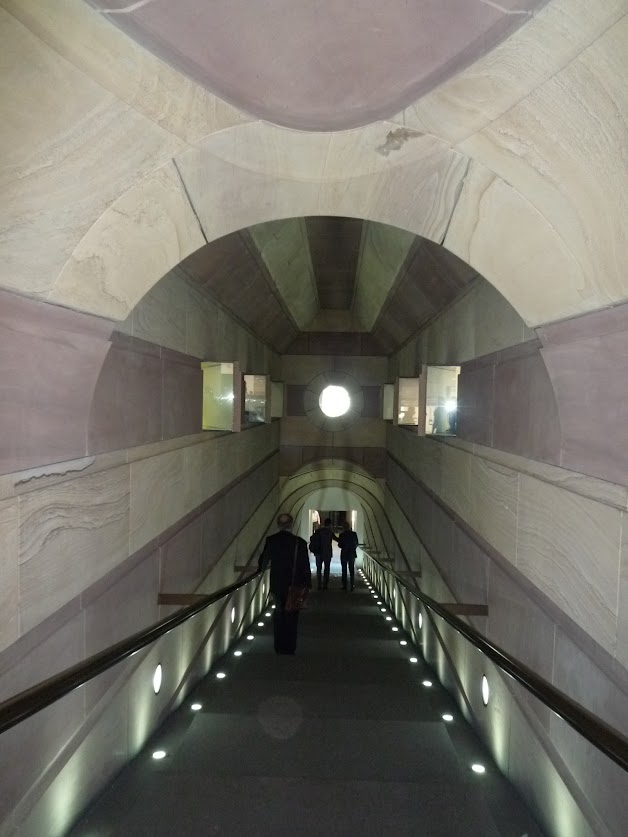 Stirling, now deceased, would have been thrilled: his design was a very conscious nod to some of the beautiful old buildings in the City, and he was delighted to be designing a building for this spot which is, as he described it, ‘at this spider’s web intersection surrounded by all those heroes like [Sir Edwin] Lutyens and [Nicholas] Hawksmoor and [George] Dance. It’s the quintessence of London.’

Brian Housden, a graduate of the Architectural Association, began designing this private house in the late 1950s, but it wasn’t until 1963 that construction work began. The house was eventually completed two years later, though Housden moved his family in before it was finished.

Heavily influenced by his friends in the European modernist movement, the final product – which the architect embellished for years after the structure was completed – was listed in 2014, hailed for its ‘completely unique architectural vision and ingenuity that syntheses a great wealth of influences and ideas’ that is executed with a ‘consistency and novelty of vision that is entirely Housden’s’.

You can’t help but love it when an architect turns a dull, functional building into something which brightens up the landscape, as John Outram did when he designed this pumping station in east London, which was built between 1986 and 1988. It was Grade II* listed just last month, as a result of Historic England’s post-modernism project.

England’s most famous/notorious new town, Milton Keynes had no bus station for its first 15 years; but in 1983 it gained this grand building in the form of a freestanding pavilion.

According to its listing document the building ‘draws on seminal buildings by the acclaimed modernist architect Mies van der Rohe, whose ideology inspired the new town plan and its buildings’. The buses were re-routed to the front of the railway station ten years ago, with the building repurposed as a youth centre.

Artist Brian Miller was involved almost from the start with the building of the new town of Cumbernauld in the 1960s, and was officially appointed as the Town Artist before construction even began. His team’s work has been recognised by conservation organisation DoCoMoMo as one of Scotland’s key post-war monuments – and the totem pole in the Carbrain area is emblematic of the work they did.

In the early 1980s Elisabeth Frink was commissioned to make a public sculpture to be placed at the former site of Dorchester’s gallows on Gallows Hill – a site where countless people were executed for their religious beliefs in the 16th and 17th centuries, as reformation and counter-reformation took hold of England. The sculptor’s work was listed in March this year for its ‘high artistic and aesthetic quality’.

Sir Michael Hopkins was selected in 1982 to design the Schlumberger research centre, financed by the brothers Conrad and Marcel Schlumberger, who had made their fortune in the oil industry.

It was built over the course of five five years, and was listed – along with part of its perimeter wall – in part due to Hopkins’ reputation, and also because of the innovative use of new materials and technology, which are still essentially unchanged since the mid-1980s, ‘significantly contributing to is high degree of special interest’, according to Historic England.

Listed at the start of this year, this late-1960s building in Neath-Port Talbot is a classic example of modernist concrete architecture on the outside, but inside the use of space, light and stained glass, and the ‘imaginative and creative‘ use of the space to help the flow of people through the building earned it listed status.

The infamous Berkshire military base was the site of countless anti-Nuclear demonstrations in the 1980s as US war planes and missiles were placed there. This now-listed wing was built in 1985 as the site was redeveloped to accommodate Cruise missiles; the base was closed just seven years later.

It has been listed for its historical importance as ‘the command and control building for an internationally significant Cold War airbase’, with the decontamination suite deemed of particular importance. On listing it in 2015, Historic England called it a ‘chilling reminder of the control structures required to wage modern war.’

What are the most common problems surveyors come across in listed buildings and how can you prevent them?

Rose of Jericho supplied the traditional paint for this house, constructed among the ruins of Stogursey Castle in Somerset. Credit: Helen Hotson / Alamy

Whether you're embarking on a new-build or painstakingly restoring a listed building, here are the craftsmen with excellent foundations.