The freezing cold but staggeringly beautiful weather over the past few days has thrown up all sorts of oddities.

With temperatures sinking well below freezing across most of Britain in the past few days, strange ice formations have been appearing across the country.

For while the ice is hugely inconvenient for those scraping off car windscreens, luckier types who have the time to wrap up warm and get outside have been rewarded with some quite fabulous sights.

Several people across Scotland, for example, have spotted hair ice (as seen at the top of this page), with one lady in Nairn sharing this picture with the BBC:

It’s a very rare type of ice formed only in wood – and, according to scientists at the University of Bern, only wood which contains a fungus called exidiopsis effusa.

When humidity is high but temperatures are below freezing, the fungus grows in such a way as to produce microscopic strands of ice hair, each less than 0.02mm thick.

Hair ice is just one of the oddities spotted, though: pancake ice has also been seen across Scotland.

It’s a very rare type of ice which makes a river look like it’s been covered with silvery lily pads.

They’re created when smooth lumps of ice are formed upstream, but knock into each other repeatedly on their way downstream, leading to the characteristic upturned edges.

If you’re heading out in the next few icy days, also look out for frost flowers – sometimes called ‘rabbit ice’ – which are usually caused by sap escaping from a plant, and which are exquisitely beautiful:

If you’re out and about with young ones, however, we’re prepared to bet that they’d rather see a ‘Snow Doughnut’ – an incredibly rare phenomenon on British shores, though some were spotted in Yeovil in 2010.

It’s formed in particularly specific circumstances: when the top layer of snow starts to melt and go slightly sticky, it can be blown by a strong wind around and around into a disc shape. The centre of the disc is usually blown away, leaving what appears to be a giant snow tyre.

Finally, there’s a much smaller but equally exotic formation: needle ice. It’s formed when the ground temperature is above freezing, but the air temperature is below freezing. Water below the surface is drawn up and freezes in needles which can grow up to four inches long – and topped by a little crumb of earth which has been pushed up. 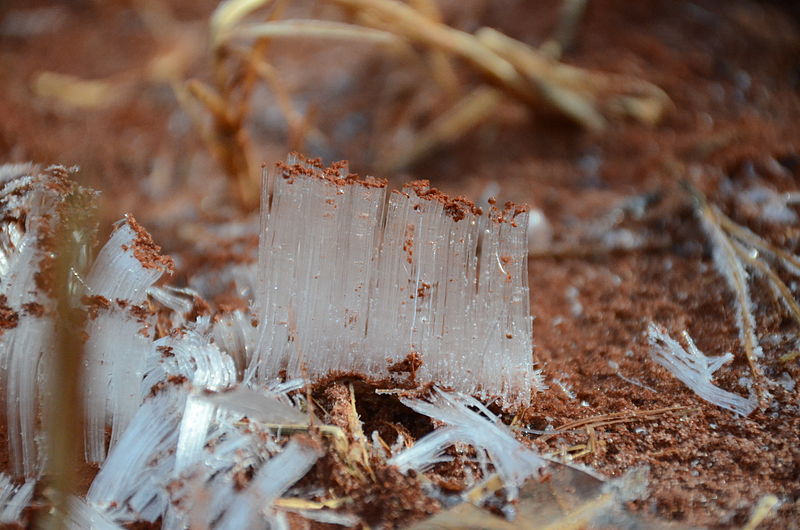