When it comes to confectionery, the British have got it licked, says Emma Hughes, who finds that pocket-money sweet treats have never looked more tempting, no matter how old you are.

Whichever way your political compass points, there’s no denying we’re living through interesting times. The world stage has become a topsy-turvy Wonderland in which impossible things routinely happen before breakfast. How nice it would be, we might be forgiven for thinking, to go back to a gentler, sunnier time when things were straightforward— childhood, in other words. And nothing semaphores a return to innocence like a bag of sweets.

Other countries have a tradition of sophisticated confectionery (think of baklava, with its 1,001 layers of honey-drenched filo pastry), but ours has always been about simple pleasures, swirled and striped like circus tents or deckchairs. It’s cheerfully uncomplicated stuff. When you pop a boiled sweet into your mouth, you can switch off your critical faculties completely for 10 minutes and that, we can all agree, is a good thing.

In spite of sugar getting the thumbs down from successive governments, sales of confectionery are rising. In 2015, the British bought £1.157 billion worth of the stuff, which is the equivalent of each of us spending £18. We’re rediscovering our sweet tooth and the classics—household names such as Bassett’s Allsorts—are more popular than they’ve ever been.

In Sweets: A History of Temptation, Tim Richardson suggests that the continuing success of these big hitters is a testament to ‘a curious coupling of hard-headed business sense and a high regard for the vagaries of human psychology, that of both children and adults’. And he’s right: most of them have a generous sprinkling of whimsy, fluke or happenstance in the mix.

Take Allsorts. The Bassett firm’s founder, a lavishly bewhiskered Sheffield entrepreneur named George Bassett, made the news in 1856 after he baked a giant cake to mark the end of the Crimean War. That might have been as far as his legacy extended had it not been for a clumsy salesman called Charlie Thompson.

In 1899, Thompson was showing off Bassett’s wares to a prospective buyer when he knocked his trays full of sample sweets onto the floor, jumbling the contents. Mortified, he started picking them up, but the buyer was so delighted by the effect that he commissioned an identical mix on the spot. The blunder was the making of the firm: Bassett’s now produces tens of millions of sweets each day and ships them all over the world. 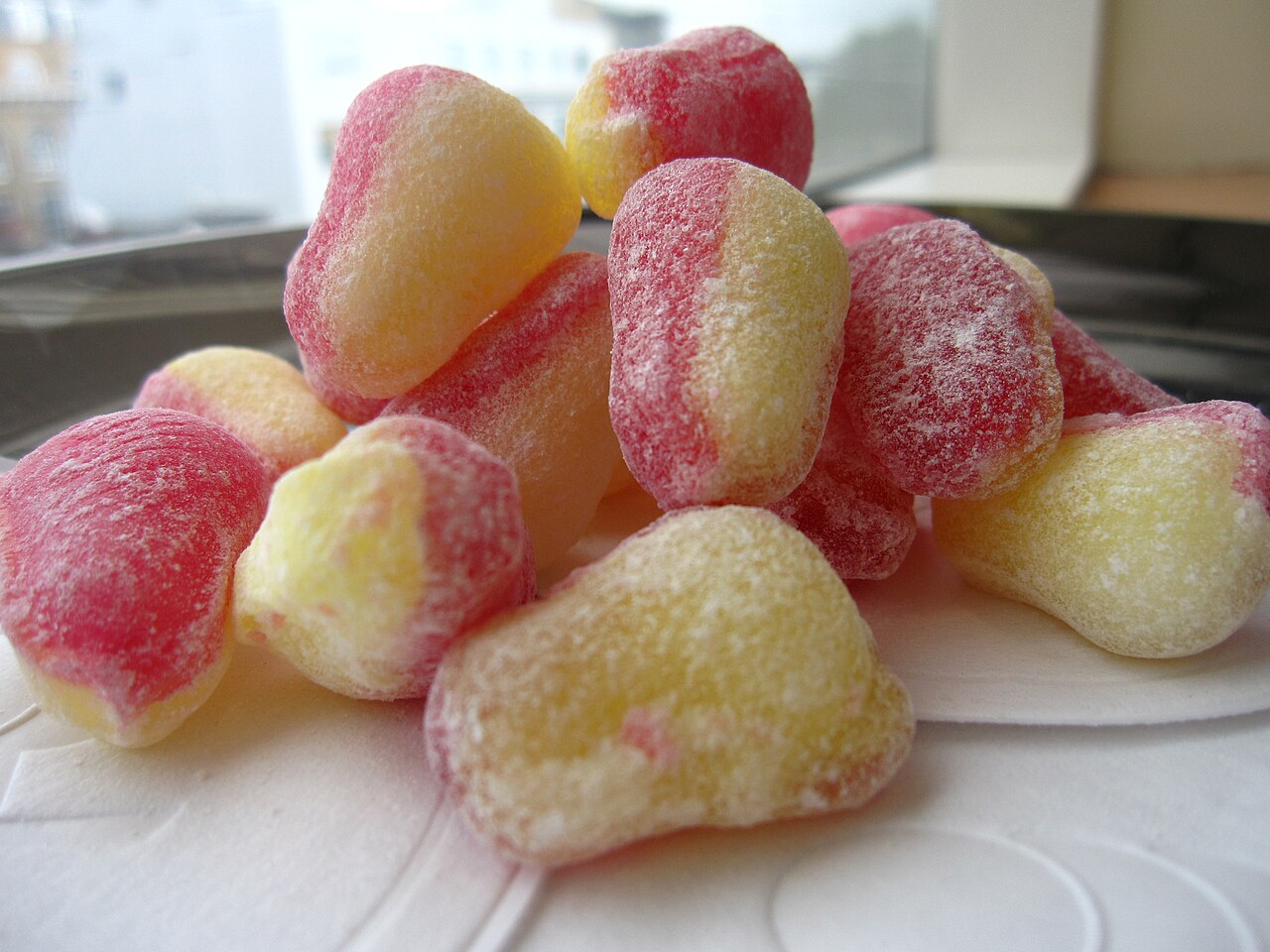 Not all pocket-money purchases have quite such a wholesome vibe. Consider pear drops: looks-wise, they’re the pin-ups of the confectionery world, with their blushing undersides and Marilyn-esque silhouettes. In terms of taste, they’re a gateway drug to cocktails, petrol and Chanel No. 5.

No wonder Roald Dahl, poet laureate of forbidden pleasures, was drawn to them from the word go. ‘Pear drops were exciting because they had a dangerous taste,’ he wrote in his first autobiography, Boy. ‘They smelled of nail varnish and they froze the back of your throat.’

Hungry for bigger thrills, he ended up dropping a dead mouse into hated local sweetshop owner Mrs Pratchett’s gobstopper jar. Today, pear-drop devotees make pilgrimages to the Wonka-like set-up at Stockleys Sweets in Blackburn, Lancashire, where the world’s largest example is kept under lock and key in a glass case next to the more conventionally sized offerings.

Perhaps some of the most memorable sweets, like the most memorable fairytales, are the ones that flirt with the macabre. The invention of jelly babies, for instance, is straight out of the Brothers Grimm. In 1864, a worker at the Fryer’s sweet factory in Lancashire made a mould for a new range of jelly bears. When he realised that the results looked more human than animal, he dubbed them Unclaimed Babies, after the foundlings left on church steps. Surprisingly, they sold pretty well, although it wasn’t until they were relaunched in 1953 with their present name that they really took off. Still, there’s something of the night about them—witness the joy children take in biting their heads off.

The sweets that have stuck around are the ones that broke the mould. In 1890, Halifax sweetshop proprietor John Mackintosh blended brittle English toffee (the kind that cracks your veneers) with newfangled American caramel. Displaying a bracingly un-British aptitude for self-promotion, he called his invention Mackintosh’s Celebrated Toffee. The bombast worked: less than a decade later, he had to open a brand new factory to meet demand and the press crowned him the Toffee King.

That being said, we’ve never been big on American-style ‘action sweets’ such as popping candy. It makes sense that we prefer substance to style: confectionery was rationed until 1953 and when there’s only so much of something to go round, you want it to last a good while in your mouth. However, there is one form of sugar-sophistry we’re suckers for: the stick of rock. How do they get the name running through the middle? We’re still fascinated, nearly a century after they first went on sale in Morecambe—and it’s heartening. Who needs blockbusters when you have the edible equivalent of a rabbit being pulled out of a hat? 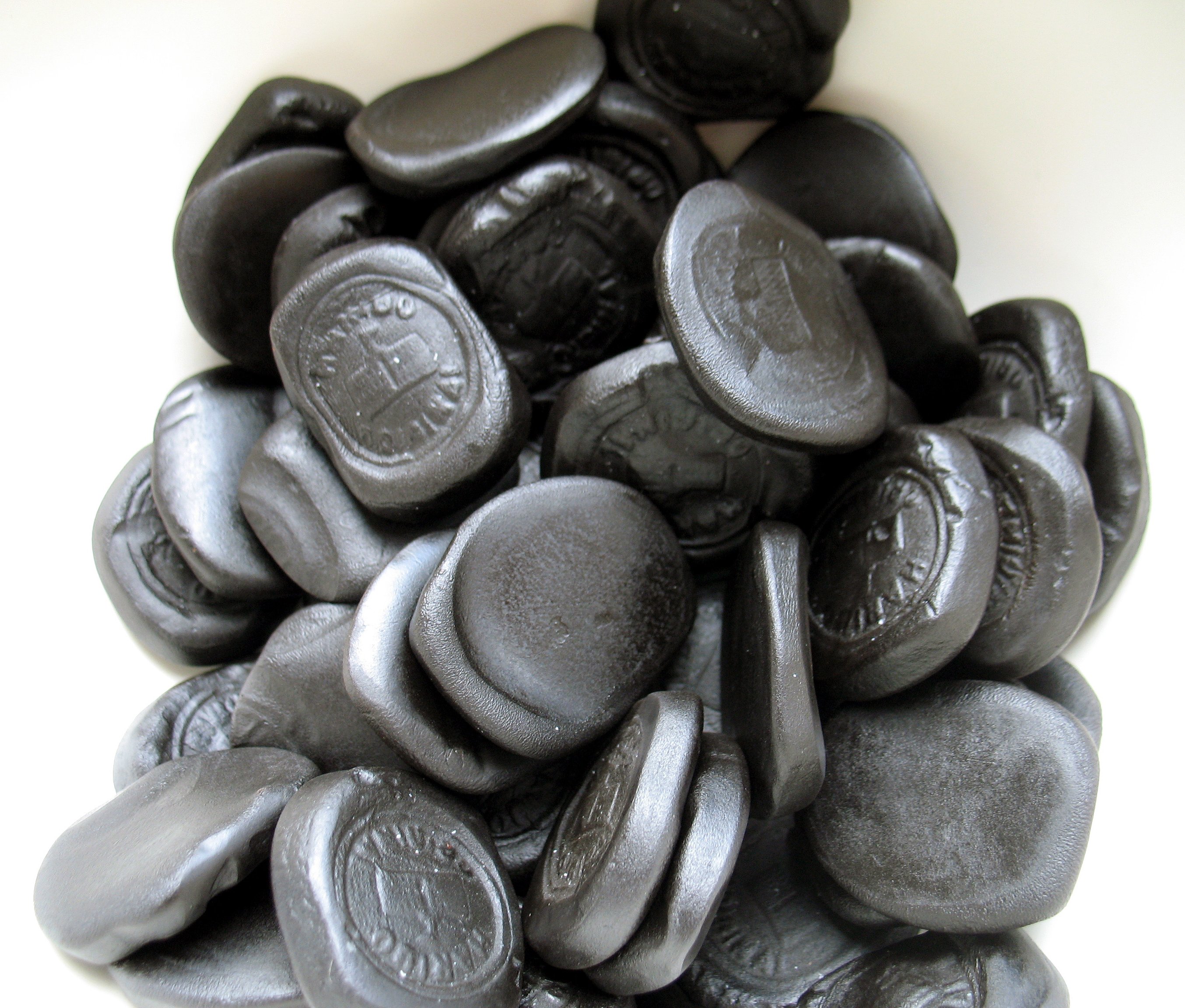 Invented by George Dunhill in 1760, this disc of liquorice (right) carries the seal of the region. Now manufactured by Haribo.

One of the most traditional British boiled sweets: sunshine-yellow and made with extract of barley water and still the best antidote to car sickness. 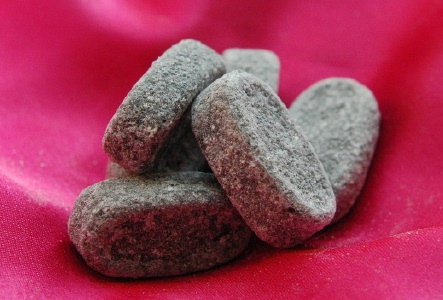 These punchy liquorice-and-herb-flavoured lozenges were handed out to servicemen during the First World War, hence the name. Supposedly, they used to contain tincture of opium.

An acquired taste—but if you like root beer, you’ll love these lobster-red pastilles.