The rainbow’s fleeting radiance rings in the human mind like bells and has inspired art, myth and poetry for aeons, reflects Jay Griffiths.

A rainbow hangs in the entrance of the Royal Academy of Arts, in the painting Colour by Angelica Kauffman (1779). In it, the archetypal painter is seated, palette in hand, with all the pouring colours of the rainbow above her – but her palette is empty. She’s not depicting the rainbow, but the opposite: she’s taking her hues from it, drawing down its radiant colours for her art on Earth.

According to Homer, there was only one colour in a rainbow: purple. Ovid and Virgil proposed that there were 1,000. Xenophanes and Aristotle considered there were three: red, green and purple. John Milton wrote of ‘a bow/Conspicuous with three listed colours gay’, underlining the import of the Holy Trinity. Shelley described the ‘million-coloured Bow’ exemplifying Romanticism’s belief in the profusion of Nature.

Keats famously protested that Newton’s cold, scientific gaze would ‘unweave a rainbow’ and yet Newton wove two extra colours into it, wanting to harmonise the rainbow with the guiding sevens that were thought to rule the universe. With the (then) seven heavenly bodies, seven notes in the musical scale, seven liberal arts, seven sages and seven wonders of the world, Newton sought to chime seven colours in the rainbow and so added indigo and orange. As each colour yields imperceptibly to the next, the rainbow, of course, has as many colours as you wish to discern and its variety of hues is matched by the spectrum of meanings ascribed to it.

According to the old saying, there’s a pot of gold at the end of the rainbow, and West African Ewe people believe that the rainbow snake touches the earth to leave precious beads. For the Igbo people in Nigeria, however, the rainbow touching the earth is an omen that an important man will die.

As you move, the rainbow moves with you – you can’t outpace it or escape it. Perhaps because of this, it has inspired shades of awe from terror to wonder to sublimity. For traditional societies of Gabon, Honduras and Nicaragua, the rainbow’s potential danger meant that children were told not to point at or look at one. In the Judaeo-Christian tradition, the rainbow is the tender covenant of God to Noah, but it’s also associated with the avenging terror of the Apocalypse.

The rainbow is as ambivalent as the sunshine in the rain that causes it. For indigenous Australians, the Rainbow Serpent is both creative and destructive – shamans work with its powers using the prisms of quartz and the iridescence of pearls. The pictograph of the Rainbow Snake – also known as the Rainbow Serpent – created between 2,000bc and 4,000bc, is likely to be the earliest art ever to portray the phenomenon. 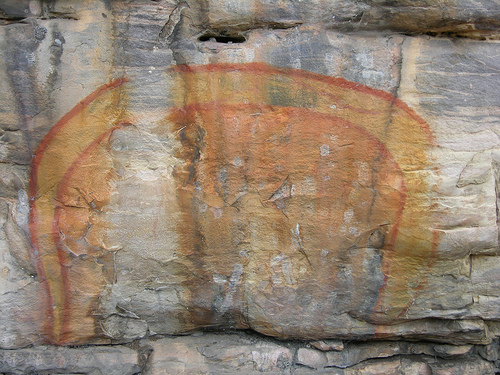 In an intimate depiction, the 13th-century Sufi poet Rumi describes the rainbow as a maiden dressed in layered robes, each skirt shorter than the one underneath. For the Berber people of North Africa, the rainbow is the ‘bride of the sky’ and for the Mayans it was a goddess.

‘But why should not the glorious Rainbow be included among the gods?’ asked Cicero. ‘It is beautiful enough, and its marvellous loveliness has given rise to the legend that Iris is the daughter of Thaumas [the Greek sea god of wonder].’ The word ‘iris’ is associated with colour and sight, the iris of the eye as well as the rainbow, and that most shining of words, ‘iridescent’.

The rainbow was also the path that the messenger Iris took when she travelled between Heaven and Earth, between gods and humans. The bridging role of the rainbow is repeated across the world, from Indonesia to Gabon, Polynesia to Hawaii, which has a good claim to being the most rainbowed place on Earth and where legend says the Rainbow Maiden danced across the rocks and sky, painting a bridge of colours.

Intangible, this bridge cannot be reached or touched and there is a delicate tension in the image, for nothing in Nature could be less secure.

A bridge between Man and Nature, from London’s crowds to the air’s crown.

Artists have long been compelled to attempt the impossible task of recreating the rainbow in paint—few have come close to it. Like Kauffman’s, even a Rubens rainbow seems too solid and Constable, usually so sweetly natural, appears to contrive his. Seurat’s technique seems perfect for the portrayal and yet, in L’Arc-en-Ciel, even pointillism is too solid for the shimmering mirage.

William Blake uses rainbows to speak of hope, bold as banners in his mind’s sky. In Millais’s The Blind Girl, the message is poignancy: his figure can’t physically see the rainbow. Dürer’s winged figure in Melencolia is differently blind: the rainbow is there, but she doesn’t look at it because the deadly anguish of depression makes its sufferer unable to see radiance, hope or luck.

Joseph Wright’s Landscape with a Rainbow (1794) captures the rapt moment of storm beauty, but, to me, the most extraordinarily realistic is the partial appearance in Frederic Edwin Church’s Niagara (1857). So lifelike was it that Ruskin, no less, was apparently confused and ‘went to the window and examined the glass, evidently attributing the prismatic bow to the refraction of the sun’.

Church’s mentor noted approvingly that the rainbow represented the seven attributes of God: the colours ‘are but refractions of that Infinite Love of which Light is the fittest emblem’. The poet R. S. Thomas would have concurred and his poem Evening, which depicts a rainbow as the archer’s bow now stilled and quiet, ends with radiant beauty:

Let us stand, then, in the interval
of our wounding, till the silence
turn golden and love is
a moment eternally overflowing.

J. M. Barrie, whispering the secondary arc of that thought, wrote: ‘Let no one who loves be unhappy, even love unreturned has its rainbow.’

Black Elk, a medicine man of the Oglala Lakota people in South Dakota, described a dream-vision in which he was granted a profound understanding. In that moment, he saw ‘the rainbow leap with flames of many colours over me’. In Buddhism, the rainbow represents the state of near Nirvana, when the ego is at its vanishing point and the spirit dissolves.

Paul Cézanne turned to rainbows to describe the luminous sense of losing oneself in art, speaking of ‘these great rainbows, these cosmic prisms… I feel colourful by all the nuances of the infinite… We are an iridescent chaos’ – or ‘nous sommes un chaos irisé’, which also translates as ‘we live in a chaos of rainbows’.

Red and yellow and pink and green

Mizzle, drizzle, dreich and dibble are just some of the many ways we describe rain. Antony Woodward considers our obsession

Britain's starry skies can be spectacular, but you need to be in the right place to avoid light pollution. Julie