Trending:
Harvest mice love pollen – so much so that they'll climb flower stalks to get it, and once they have will often nod off for a doze with full stomachs. Credit: Michelle Howell / Alamy

PICTURE OF THE DAY: Harvest mice love pollen – so much so that they'll climb flower stalks to get it, and once they have eaten their fill have been known to nod off for a doze with full stomachs.
They're amazing little creatures in all sorts of ways: one of our favourite facts is that they are the only mammals in Britain to have prehensile tails, which they use to help themselves climb plants.

We’re not entirely sure why it should be described as a ‘drinking hall’ rather than just a hall, but you can’t deny that the phrase adds a bit of Norse charm to the discovery made at Skaill Farmstead in Westness, Rousay.

Researchers from the University of the Highlands have made the discovery and believe it to be the former home of Sigurd, a powerful 12th century chieftain, whose hall is mentioned in the sagas.

‘You never know,’ said Dan Lee, head of the excavation, ‘but perhaps Earl Sigurd himself sat on one of the stone benches inside the hall and drank a flagon of ale.’

‘One scoop of the net brought us a newt straight out of Jurassic Park, a raft spider and a Notonecta galuca’

Ponds are places of tranquility for reflection — and priceless havens for wildlife.

John Lewis-Stempel’s piece on ponds is really something — if you’ve not yet read it, it comes highly recommended. And if you have, you’ll probably want to read it again. Here’s a sample:

‘There’s that unseen universe below the surface, teeming with creatures, as Orwell knew, as fantastic as anything in science-fiction. The other day, I went ‘pond-dipping’ with my daughter, Freda — one scoop of the net brought us a newt straight out of Jurassic Park, a raft spider and a Notonecta galuca, a backswimmer.

‘This scarab-shaped bug hangs from the surface film, loitering, until it detects the vibrations of prey moving about. Then, it dives down at speed, using its oar-like back legs for propulsion, clutches the prey with its forelegs and stabs it with its rostrum, before injecting a toxic juice to paralyse and liquefy, much as spiders do. The backswimmer takes a leisurely while sucking out the ‘soupy’ innards of its victim. The beast can live for nearly a year.’

It’s looking particularly bad if you’re based in the West Country — a music festival in Newquay has been cancelled due to fears of flooding.

Thatch the way to do it: 8 picture-perfect thatched cottages 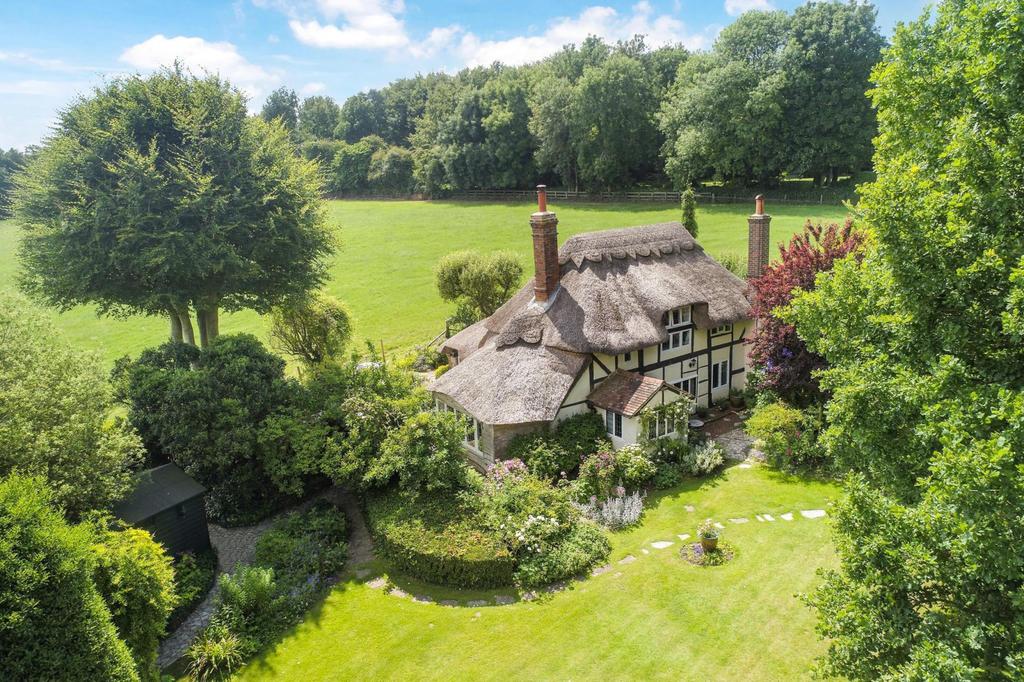 It’s hard for us to believe now that thatched roofs were once considered only good enough for the poor. Would-be buyers of country cottage now chase these charmingly picturesque properties with huge zeal — and it’s not hard to see why.

The giant cannibal parrot taller than a toddler

A parrot that stands over three feet tall and weighs in at over a stone? The discovery of Heracles inexpectatus is the stuff of nightmares.

On This Day… Mata Hari born

Margaretha Geertruida Zelle – aka Mata Hari, Dutch dancer and spy, as depicted in a French postcard of the 19th century.

Not many names go down in history to the extent that people know them without knowing why, but Mata Hari has. Born Margaretha Geertruida Zelle in the Netherlands on August 7, 1876, the dancer and courtesan became one of the most notorious double agents in history. Her dancing was once described as ‘majestically tragic, the thousand curves and movements of her body trembling in a thousand rhythms’  and her fame spread throughout Europe before the First World War, with Kaiser Wilhelm II’s son one of many well-connected fans.

Those connections saw her recruited as a spy by both sides during the war, leading to her arrest, prosecution on the flimsiest of evidence and tragic death by firing squad at the hands of the French — her adopted country, and the one to which she swore she owed her true allegiance.

And finally… how to stop seagulls stealing your chips

The answer is to stare them out, apparently. Simple as that. ‘Experiments by the University of Exeter found that the birds are surprisingly easy to intimidate, and will back off from a meal if they think someone is watching,’ reports the Daily Telegraph.

Today we look at why our canals have become rivers of plastic, but it needn't be that way; the scrapping

If you're looking for a place to start a new life, this morning's news round-up has the answer.