The winners of this year’s Wildlife Photographer Of The Year Competition have been announced. of elephants at a waterhole, beating 43,000 other entries. Mr du Toit’s shot – taken at ground level – emphasises the grand size of the beasts and what he describes as their “special energy”.

“My goal was to abandon conventional photographic practices in an attempt to capture a unique elephant portrait,” he said. Udayan Rao Pawar – a 14-year-old from India – scooped the Young Photographer gong with his picture featuring gharial crocodiles riding on their mother’s head along the Chambal River. The champion snaps will on display at London’s Natural History Museum in an exhibition opening on 18 October 2013 and running until 23 March 2014. They’ll be joined by works – including 16 other category winners – taken around the world by both amateur and professional photographers. Tickets for the exhibition cost £13 for adults and £6 for concessions, but are free for members and children younger than four years old. 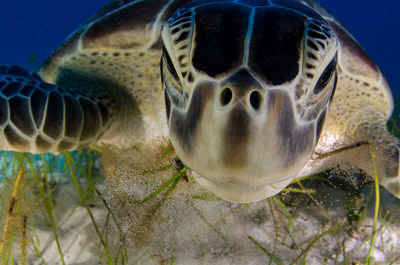 * Art to see this October