Tom Coward, head gardener at Gravetye Manor in West Sussex, talks about sowing the seeds that will lead to beautiful cooking.

Every patch of soil in our kitchen garden at Gravetye must be used productively so we can supply our à la carte menu and produce the best flavours possible. An important part of this is selection of the best varieties, chosen in consultation with Chef George. Every day, he comes to the garden to see the crops and give his feedback (and perhaps escape a hot kitchen for a moment).

Each winter, we meet to review the previous season and plan the next one, before we place our seed order. This year, we will grow more than 150 different vegetable varieties from seed, each being carefully selected for the best flavour.

We always have our tried-and-tested varieties that we know will perform and nothing is more reliable than the humble radish. We sow them as early as March, under a cloche and, because the radish is such a fast crop (ready at less than four weeks in peak season), it can be used very effectively as a ‘catch crop’, sown into temporarily vacant ground.

We’ve tried many, but Apache still remains the best, with a unique sweetness to balance its spiciness. This year, we’re going to try a new black-skinned one, Black Spanish Round.

Also fast-maturing are the turnips, which can be produced through most of the season with successional sowings. We harvest them when they’re still small — about the size of a £2 coin — but, prior to that, the marble-sized thinnings are especially prized by George. These have the sweetest flavour and are beautiful on the plate, served whole with the leaves on. Tokyo Cross is one of the best-flavoured turnips for this treatment, having good, clean white flesh.

Carrots are traditionally a staple of most kitchen gardens and we tend to harvest ours as ‘babies’. We’ve tried many varieties over the years, but, through trial and error, have found just three to be the most successful: Amsterdam Forcing, Rainbow Mix and Purple Haze, the latter being undoubtedly the best purple available.

Through using cloches and a poly-tunnel, we can produce our baby carrots nearly all year round in the same way that we do bulb fennel, which is a favourite of mine. For both, we sow them into plugs and start them off in the cold frame, to be later planted out in the garden or poly-tunnel, depending on the season. Autumn fennel plantings can be harvested from the tunnel throughout the winter, giving us a steady supply; Zeta Fino is excellent both for early and late sowings, having tolerance of the cold. Rondo is the tastiest fennel, but only good through the summer, grown as a main crop. 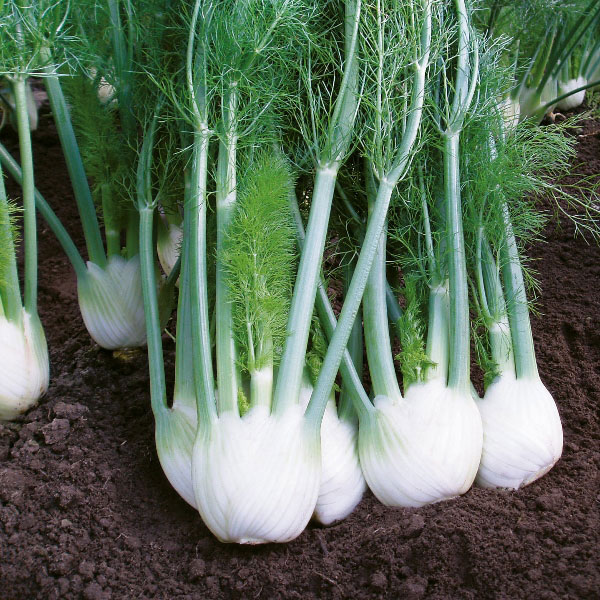 Starting vegetables off in plugs can be a really good way of giving the plants a head start and controlling the quality of the crop. This works especially well for producing baby leeks. These can be sown a pinch in each cell, then planted out and harvested in bunches. Zermatt is the variety to use for this, although it does seem to resent the cold, so, recently, we’ve been using Northern Lights for winter leek crops.

As well as our tried-and-tested varieties, it’s important to allow space to experiment with new things. Last year, our great discovery was the New Zealand yam or oca. It’s available from Marshalls as tubers and is planted in the spring, then lifted through the winter. It has a really unusual, lemony flavour, which pairs beautifully with fish and white meats.

Not all of our experiments are successes and, for every discovery, we have to spend time on a few disappointments. Yacon, a close relative of the dahlia, was one that I had high hopes for. It’s handsome, with lush, heart-shaped leaves reaching above one’s head and really quite easy to grow. The tuber is the bit to be eaten and used in a similar way to a water chestnut. However, it had a rather bland flavour and has been dropped.

This season, I’m especially excited about a trial in the glasshouse with mini cucumbers. They’re supposedly far sweeter than the larger, more common varieties and Chef is very interested in using them in his garden salad. Highly recommended are Green Fingers F1 and Mini Munch. It’s always good to try new things, even if they don’t work and, if you get just one exciting discovery, the effort is all worth it.