Alan Titchmarsh says that now is the time to clear out the weeds and keep your pond in top condition – and you can even get the grandchildren to help out.

The most difficult decision facing the owner of a wildlife pond is that of timing the annual clearout – but surely a wildlife pond doesn’t need an annual clearout? Well, you can leave yours alone if you want to, but I know that if I leave mine, the reedmaces (bullrushes to most of us) will march across it in competition with the bog beans on the other side to see who can reach the middle first. Plus that ‘one-third of the water’s surface’ that’s meant to be covered by the waterlilies will turn into two-thirds.

Spring isn’t a good time for this job, as the frogs and toads and newts are breeding and should not be disturbed. To do the job in winter is unpleasant and will disturb all the creatures that are hoping to hibernate peacefully in mud and dormant marginal vegetation. No, it has to be summer, in the hope that the dragonflies and damselflies will still have time to lay more eggs.

I know it’s time to tackle the pond when the submerged oxygenators start pushing up their aerial growth. They’re not all of the pretty variety, but their presence is vital to keep the water healthy and clear and to discourage algae; their emergence indicates that things are pretty hugger-mugger below the surface.

This is where rowing my grandchildren around takes on a utilitarian purpose – floating out in the pond, a rake is dragged through the ‘weed’ and is hauled on board, leaving about a third of it behind to re-root and continue its vital work. We leave the weed on the side of the pond for a week or so to allow any creatures capable of movement to slip back into the water, then the uprooted vegetation is put on the compost heap to rot down (and smell for a bit, too).

“The dragonflies and damselflies and other creatures of the water turn this corner of my garden into Nature’s cinema, where there’s always something worth watching”

The reedmaces are attacked mercilessly. We didn’t plant them – they’re opportunists – but a few of them are statuesque, with their fat cigars of flowerheads in mid to late summer.

We cut these off just before they start to seed and erupt into cottonwool, with the intention of slowing down their spread, but their natural, creeping means of reproduction is every bit as effective and they take a fair degree of muscle power to dislodge from the mud before being shredded and added to the compost heap. The waterlilies are reduced at the perimeter of the floating mass of leaves so that the boat can circumnavigate the pond.

I know that, one day, I may have to take more drastic action and thin it out, but this cowardly way of reducing the surface area it occupies has worked for the past 10 years and, so far, the plants that are left behind have remained handsome and vigorous. 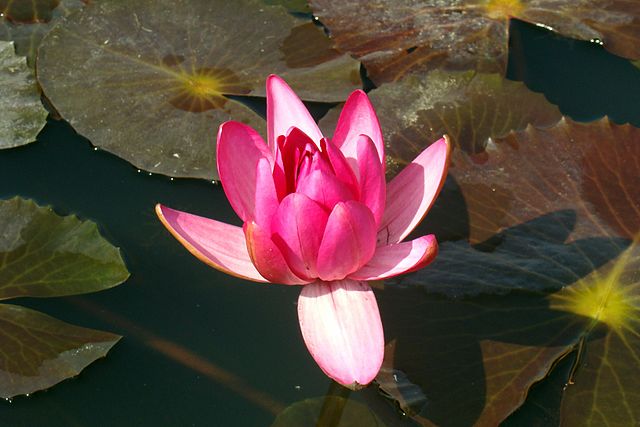 Flag irises, water mint, bog bean and other marginals and bog plants must all be tamed and reduced a little and, although in the immediate aftermath the pond looks as if it’s done battle with a prizefighter, I know that, within a couple of weeks, the water will have settled and the plants that remain will have fluffed up their feathers and resumed normal service.

It’s not a job that I particularly look forward to, but it’s one that appears not to worry the moorhens and the ducks one jot. Along with the roach that came from I know not where, the dragonflies and damselflies and other creatures of the water that escape the predations of the fish, they turn this corner of my garden into Nature’s cinema, where there’s always something worth watching.

Having removed the lower branches of the alder trees that seeded themselves around the perimeter, I can walk around the pond each day and see, between the clean trunks of the trees, the results of my muddy handiwork. It makes for a happy and pleasing view that changes every day.

Our gardening expert on the days spent learning the names of some of the most obscure plants in Britain.

The gardener writes about one of his regrets with regard to his favourite type of tree.