Trending:
Jane Austen's house in Chawton is now a museum

At their home in Hampshire, where Jane spent her childhood, the Austens worked a 200-plus-acre farm that kept them virtually self-sufficient in food. Although her father ran the bulk of the agriculture enterprise, managing the kitchen garden was her mother’s province and joy. A quaint, jumbled-up blend of edible and ornamental plants, ‘the kitchen garden was as much her delight as the flower borders,’ remembered Mrs Austen’s granddaughter, Anna.

Mrs Austen dug up her own potatoes, wearing ‘a green round frock like a day-labourer’s’. Eventually, Jane would inherit her mother’s unabashed enthusiasm for tending to the beauty, as well as the bounty, of the garden. But she would only learn to love it after it was lost.

When Jane was 25, the Austens abruptly left their farm, poultry yard, brewhouse, dairy and beehives and retired to a small terraced house in Bath, without so much as a kitchen garden to call their own. Jane drearily described Bath as ‘all vapour, shadow, smoke and confusion’. Surely her intense longing for the countryside was the catalyst for her many desperate walks to the public gardens within the city. Jane wistfully wrote: ‘I go and refresh myself every now and then, and then come back to Solitary Coolness.’

It would be five long years before the Austens had, once again, a private garden of their own. In 1807, the family’s next move, to Southampton, continued Jane’s stifled and cramped city existence, but their house in Castle Square had one wonderful consolation — a kitchen garden.

‘A pleasant garden,’ to quote Jane’s nephew, ‘bounded on one side by the old city walls.’ This discovery lifted Jane’s sprits and she actively planned her own little piece of Eden. Writing to her sister Cassandra, Jane reported that ‘the border under the terrace wall is clearing away to receive currants and gooseberry bushes, and a spot is found very proper for raspberries’.

Jane didn’t know it then, but her small allotment in Southampton was only practice for the next stage. The year 1809 afforded Jane, along with her sister and mother, the opportunity to return to the countryside of Hampshire, to Chawton Cottage. And, with a mind brimming with ideas of the fruits and vegetables she wished to plant, it’s little wonder that Jane’s first question was ‘what sort of a kitchen garden is there?’.

Jane’s niece, Caroline Austen, gives the best description of it: ‘A high wooden fence shut out the road (the Winchester road it was) all the length of the little domain, and trees were planted inside to form a shrubbery walk… and there was a pleasant irregular mixture of hedgerows, and grass, and gravel walk and long grass for mowing, and orchard.’ 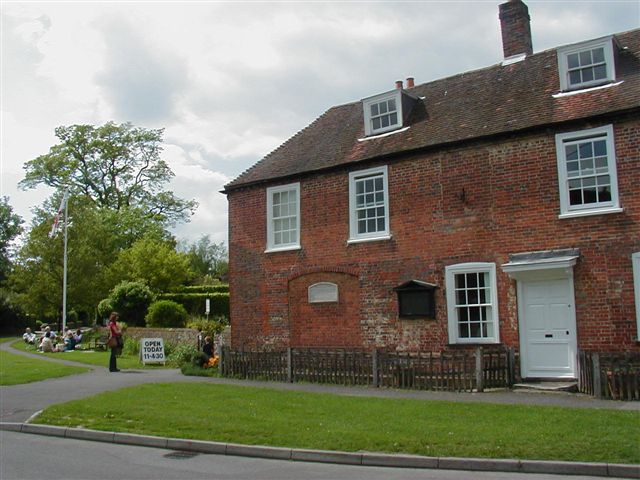 Shortly after settling within this green canvas, Jane wrote enthusiastically of the charming flowers and fruits that filled it. Sweet Williams and columbines bloomed ‘very gay’ within the shrubbery, the syringas started appearing, the first apricots had been detected and a walk around the fragrant orchard was an enchanting delight that ‘is not in Human nature to imagine’. And her mother’s beloved potato plot was ready for digging.

It’s no coincidence that this new garden and its welcomed fecundity in Jane’s life coincided with the most fruitful period in her writing. While at Chawton, in the last eight years of her life, she revised Sense and Sensibility and Pride and Prejudice and completed Mansfield Park, Emma, and Persuasion.

Conversely, she wrote little to nothing during her dreary years at Bath and Southampton. Chawton fostered Jane’s creativity in a way that little else could. After all, as Fanny Price observes in Mansfield Park: ‘To sit in the shade on a fine day, and look upon verdure, is the most perfect refreshment.’

Nearly all of Austen’s heroines are given fruitful places in which to live out their happy endings; in Sense and Sensibility, the tall garden walls of Delaford, ‘covered with the best fruit-trees in the country’, welcome Marianne Dashwood as their new mistress. In Pride and Prejudice, Elizabeth Bennet will forever enjoy the luxurious hothouse fruits of Pemberley, with its grapes, nectarines, and peaches. Even the eponymous Emma, for all her sophistication, is eventually won over by the agrarian charms of Mr Knightley’s home; his farm at Donwell Abbey captures her heart, although whether such
a bucolic place inspired her to take up the pleasures of a garden fork is a doubtful hope indeed. But Jane knew a thing or two about romance, declaring, ‘the garden is quite a love’.

Jane Austen Regency Week runs from June 20 to 28 with events in the Chawton neighbourhood. Visit www.janeaustenregencyweek.co.uk for further information