The leader of the Red Arrows talks about leadership, respect and how trust must be earned.

David Montenegro is the leader of the RAF’s Red Arrows, the world-famous aerial display team.

His initial three-year stint with the team began in 2009, and was spent as one of the two ‘Synchro Pair’ pilots – the duo who perform the most daring head-to-head manoeuvres.

Following that spell he was recalled to front line but returned to the Red Arrows in 2015, this time as the team leader.

Here, he talks about his role, his challenges, and the mutual respect which lies at the heart of the team’s operations.

You lead the formation. What exactly does that entail?

I have the glory of being able to see where we’re going! I set the pattern of the show, so all the other pilots use my aircraft as a reference. I navigate to the location, and during the display I’m flying the pattern that keeps us centralised.

Do you communicate much in the air?

Constantly. Our displays are almost scripted, and every manoeuvre is done on my command. It’s about getting the timing right, listening to my voice; there’s a very deliberate cadence. It’s like I’m narrating.

You’re a previous Synchro Leader. Is the responsibility of heading the whole team more burdensome?

I’d describe it as more of a positive responsibility! Being in the Synchro Pair was great, but getting the most out of this team of individuals is superb. Definitely worth the extra work and the occasional missed heartbeat.

Do Red Arrows pilots trust each other automatically?

No, it’s not a case of selection bringing instant appreciation. Trust starts to build during our training season. The most important part of selection is character assessment: you want those who are confident, but not over-confident; who accept informed criticism and can talk about their issues. By the end of training, having seen the new pilots work on their weaknesses and develop their skills, you go into the display season confident that they’ll respond to tough situations in the correct way.

Are there degrees of trust?

Many. I think the most crucial relationships are between the team members and the leader, and then between the Synchro Pair. We begin the training season in small groups and build up to the full formation, but for four months we barely see the Synchro Pair. They share an office and work up their routine, honing the raw flying ability they’ll need. 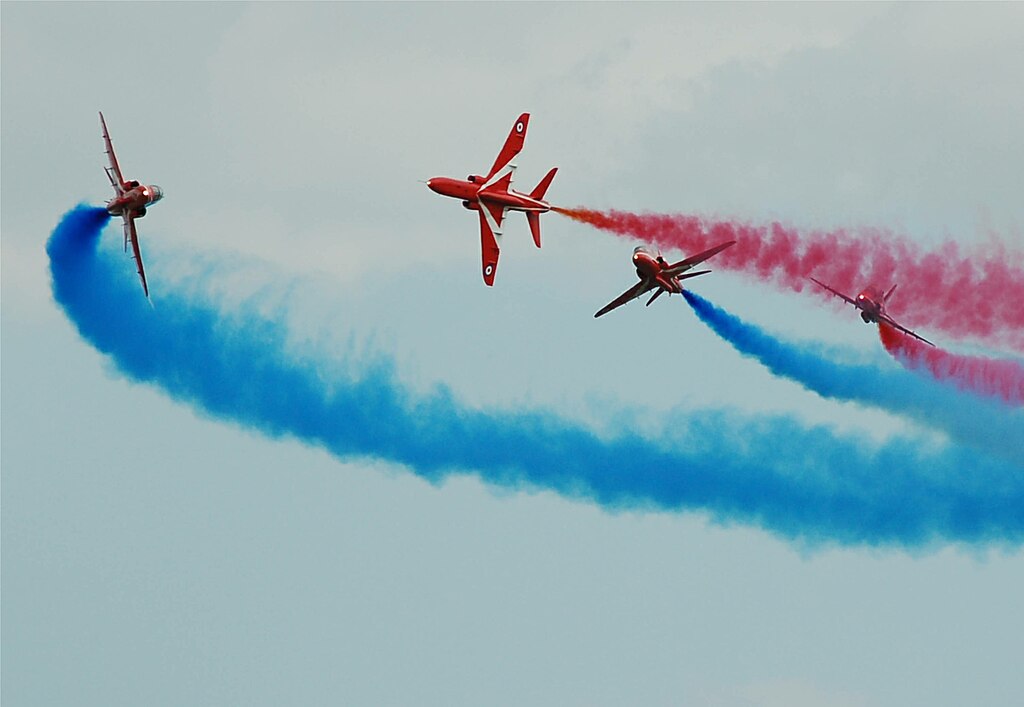 Synchro 2 is a second-season pilot who will become Synchro Leader in his third year and be responsible for choosing a partner from the first-year pilots. It would be … wrong for me to become autocratic and make that decision; it must be the Synchro Leader’s choice.

You fly to venues with the Circus [technical support team] sitting in the back seats. Is that unusual?

In the fast-jet environment, yes. But it’s a close relationship. You have implicit trust in them to prepare the aircraft, because you know the training they’ve been given by the RAF and you know their character.

Does being a military squadron make that process easier to manage?

I think our framework allows us to get jobs done very well and quickly. We understand each other’s background. The 21-year-old senior aircraftman appreciates where I’ve come from, and I know the quality of training he’s had and how he’s got where he is. That helps. I think the relationship is strong because there is a natural hierarchy in the service. I can ask for a task to be done and know it’ll be done a certain way and on time because this is what we do in the RAF.

But my massive caveat is that simply wearing rank doesn’t engender trust. It always has to be earned.

This interview originally appeared in The Red Bulletin.