Trending:
PICTURE OF THE DAY: Morte Point in North Devon. The name — 'Death Point' in French — alludes to the fact that this part of the coast has an infamous part in history due to the number of shipwrecks. Five ships alone were wrecked here in the space of a few months in the winter of 1852. The most famous wreck, however, carried a cargo of live pigs. Many managed to swim to shore, living on seaweed until they were rescued. The beach where they made their colony was named 'Grunta Beach' in tribute to their tenacity. Credit: Anthony Brown / Alamy

Our news round-up features a record-breaking day for tree planting, alarming data from the Met Office, weird and wonderful cathedral attractions and a worrying trend reported by sheep farmers.

The UK’s 10 hottest years have all occurred since 2002

The UK’s 10 hottest years on record have all occurred since 2002, the Met Office has said after publishing a record of its statistics stretching back to 1884. The report was published in the week after the UK recorded its highest ever July temperature of 38.7C in Cambridge University Botanic Garden, while yesterday the country saw heavy downpours which led to flood warnings.

The data formed part of the Met Office’s latest annual state of the climate report, published in the International Journal of Climatology.

Dr Mark McCarthy, the head of the Met Office’s national climate information centre, said the extra data revealed a ‘very interesting timeline, with the top 10 warmest years at the most recent end, since 2002’.

Fancy a bit of salad with your cider? 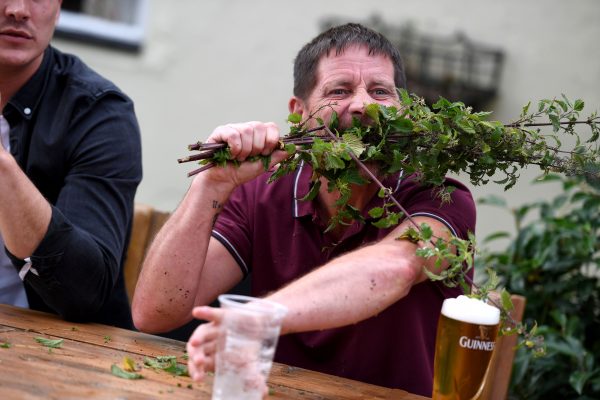 The World Nettle Eating Championship is not for the faint-hearted.

The crazy golf course built in the nave of a cathedral

Traditionalists might want to look away now — they’re likely to be appalled. The rest of us will merely be slack-jawed in disbelief.

Yes, Rochester Cathedral really has installed a nine-hole crazy golf course in its nave. The unusual attraction — which will be open until September — features a number of bridges and is hoped to help visitors ‘reflect on the bridges that need to be built in their own lives and in our world today’.

Ethiopia’s tree planing world record shows what can be done

In what is believed to be a new world record, Ethiopia has planted more than 350 million trees in one day.

Led by Prime Minister, Abiy Ahmed, the project aims to counter the effects of deforestation and climate change, with the goal of planting a total of four billion indigenous trees by October.

Sheep farmers have reported their flocks suffer an average of seven dog attacks a year, with the attacks leaving as many as 30 or 40 sheep dead or badly injured, according to the National Sheep Association’s annual survey. Farmers report that most attacks are perpetrated by single dogs being let off the lead by owners who don’t believe that their pets would harm a sheep.

It’s a salutary warning to all dog owners who walk their dogs across grazing land — as is the fact that the farmers polled believe shooting the offending dogs is their single best course of action.

On 31 July, 1971 the first Lunar Roving Vehicle was deployed during the Apollo 15 mission to the moon. These battery-powered vehicles were used in the last three missions of the Apollo programme and remain on the moon to this day.

Now how about that for a Top Gear race…

Airlines have warned about a rise in the number of passengers attempting to travel with ’emotional support’ dogs amid fears that many are unsuitable for travel in aircraft cabins.

Airlines UK said that removing guidelines which imposed limits on carrying animals could see the use of assistance dogs becoming more commonplace, as it is in the US where some cabin crew report being bitten.

Airlines UK also warned that, without proper regulation, passengers could try to board with other animals in tow. In the US there have been reports of passengers taking kangaroos, pigs, turkeys, monkeys, hedgehogs and ducks on aircraft, although a peacock was banned for health and safety concerns.