Flowers? Boring. Chocolates? Pfft. Push the boat out this year.

If… money is no object

And why should it ever be, compared to the value of love? Admittedly, however, this option might push all but the best-heeled a little too far since it comes in at £250,000. But the experience it offers – dreamt up by the former Royal Yacht Britannia with a bit of help from Scottish jeweller Hamilton & Inches – is arguably the ultimate Valentine experience.

It starts with a private jet flight to Edinburgh, after which you’ll be chauffeur-driven to Britannia itself in a Rolls Royce for a 10-course meal for two with paired wines chosen by the Britannia’s sommelier. After dinner you’ll be breezed back in the Roller for a night in the Balmoral Hotel, back in the centre.

We know what you’re thinking: what’s a girl to wear for a night like that? Well, the dress is up to you, but the jewellery is taken care of: the package includes a Hamilton & Inches diamond necklace, earrings and cuff bracelet featuring some 660 diamonds. Book on +44 (0) 131 555 8800 or www.royalyachtbritannia.co.uk.

If… you want to say it with pastry

Well, here’s one that he or she won’t expect. Dickinson & Morris, Britain’s longest-established makers of Melton Mowbray pork pies, are offering these rather delicious looking pork pies with a pair of hearts on top.

It might not be everyone’s idea of romance, but for those who love this great British food tradition it’s a real giggle. These extra-large pies (each one is 800g, or almost two pounds) cost £9 plus delivery, and come with a hand-written note from the baker who creates yours. Order by midday on Friday for Valentine’s Day delivery at the Dickinson & Morris website.

If… you want a walk in the country

Is there any better feeling than, after a strenuous climb, standing atop a hill, breathing the crisp, cool air right to the bottom of your lungs and gazing out at rolling country below? Of course not, so share the moment with a loved one. Get yourself to Brimham Rocks in North Yorkshire, where you can explore the labyrinth of paths that meander through the weird, wonderful and higgledy-piggledy formations. 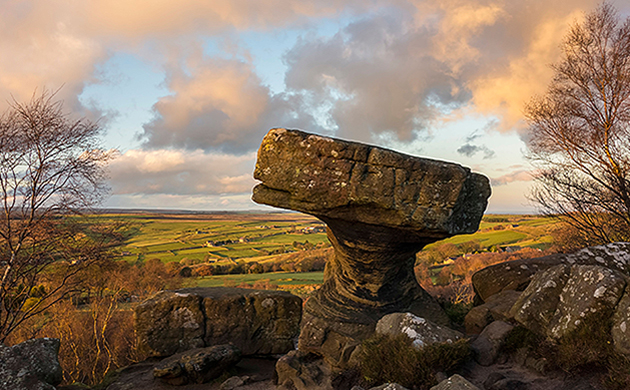 After the walk settle down on a perfect-picnic rock and sit down for a heavenly feast (hot Thermos of tea or coffee recommended) and God-worthy views over Nidderdale.

If… you want to indulge a loved-one’s guilty pleasure

Be honest now: who doesn’t have fond memories of Mr Kipling’s exceedingly good cakes from their childhood? (If you genuinely don’t you now have our permission to scroll to the Sotheby’s auction in the next slot down).

Of course you do. And if your beloved does as well, Mr Kipling is offering a rather hilarious and magnificent way to indulge those memories with what they’re calling a ‘Bou-cake’.

The one pictured here is a giant, £400 creation that stands over 3ft high, but they are selling smaller bouquet-cake hybrids via the company’s Facebook page for £30. Be warned, though, numbers are limited – we’ve a feeling they’ll sell out of these exceedingly clever presents rather easily.

If… you want a gift to keep forever

If… you fancy a sightseeing tour with a difference

Why not take the apple of your eye on a helicopter tour of London? He or she can see the capital like as never seen before, as you swoop dramatically from Tower Bridge to Chelsea along the river. 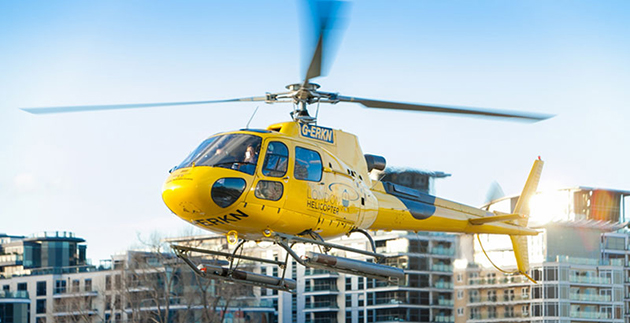 Prices with The London Helicopter start at £150 per person for a short buzz over the city, but for Valentine’s Day you’ll no doubt want the entire chopper to yourself – that’ll set you back £750.

If… you want to re-live memories in a special place

A romantic walk in a special place is always a winner on Valentine’s Day, but here’s a great idea to cap it off: a cardboard box which turns your phone into a miniature projector.

This £22 gizmo from the National Theatre Bookshops is marketed as a way to take a movie with you anywhere you like, and it’d work brilliantly like that… but we can’t help thinking that it’d make the perfect way to work out some sort of proposal video for Valentine’s Day.

If the selection in WH Smith isn’t quite hitting the spot for you, try stationery brand Papier. Their selection has all sorts of funny and clever designs which, to our minds, strike a lovely note between affection and whimsy. Plus, they can be customised and delivered next day.

And finally, if… you forgot all about it and are reading this article on February 15

You could do worse than try out the nicely-named ‘Doghouse Bouquet’ from Bloom & Wild. It will consist of two dozen roses of various colours – which is both a nice way to apologise, and a clever way for a florist to offload all those unsold flowers they have left over…