The judges at the Chelsea Flower Show made a bold choice by giving James Basson the top award for his garden modelled on an abandoned Maltese quarry.

Basson created The M&G Garden as an evocation of a disused Maltese quarry, winning the overall award for Best Show Garden at the Chelsea Flower Show 2017. Viewed by the Queen and the Duchess of Cambridge, the winning garden has been lauded for the way it captures ideals of ecological sustainability and the way it displays the diversity of Malta’s ecosystems.

It is not choice that will please traditionalists, however. Even Basson himself admits that the area is “stark” and “brutal.”

If you didn't manage to get tickets before they sold out, you can still enjoy the Chelsea Flower Show.

Towering columns of limestone at different heights are designed to showcase quarrying over time, but the steppe, garigue, and maquis planting groups represent the many and various cliff top habitats of Malta. With special permission of the Maltese government, the protected carob tree is placed at the centre of the garden with other unusual plants such as Euphorbia melitensis (Maltese spurge), Salsola melitensis (Maltese salt tree), and Limonium melitense (Maltese sea lavender).

What struck show attendees was the variety Basson managed to imbue into his work. The special and diverse plants and planting methods emerge from fissures in each limestone column, with the plot divided into different zones with their own ecology.

Grasses, evergreens, and perennials give way to arid shrub land; each area of the M&G effort suggests the fragility of the Maltese environment and the natural world as a whole, indicating that humans need to take action to preserve environmental beauty and delicate, interconnected ecosystems.

Noting the unique appeal of his triumphant plot, Basson stated in an interview with the Telegraph: “the quarry is not supposed to be pretty. It is stark and monumentally brutal.”

Basson added that the garden is about “man and nature reacting together over the course of time” showing how essential it is “to preserve the fragile balance and celebrate the wonder.”

Country Life’s Gardens Editor Kathryn Bradley-Hole is a fan: “I admire the sentiment and I’m a huge fan of James Basson,” she said.

Bruna Miranda in a flower dress in The M&G garden at the 2017 RHS Chelsea Flower Show pic: Rex)

“This is a brave and challenging composition and quite unlike anything we’ve seen at Chelsea before. James’s message is ‘on trend’ with its ecological focus; however, the RHS has rewarded his stance against what we accept and cherish as good horticulture with, perhaps, surprising generosity.

“Malta’s bird life is probably of greater concern even than its plants, so it is to be hoped that this garden, with its environmental message will, by association, highlight the plight of tens of thousands of migrating songbirds shot down on their journey through Malta every year.’

Among the other gold medal winners in the category was Gary Breeze’s effort for The IBTC Lowestoft: Broadland Boatbuilder’s Garden, which included a replica of a 900-year-old boat. 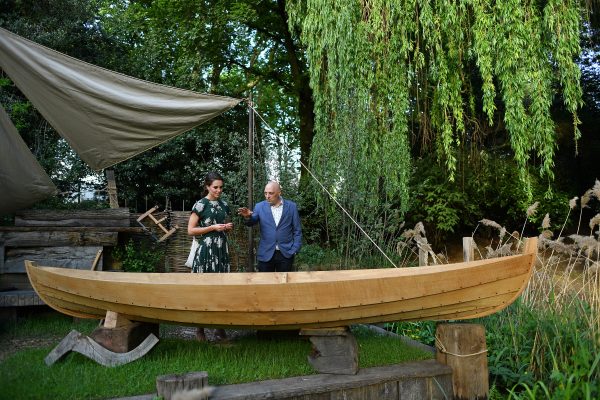 The rest of the gold medal-winning plots in full: