Distinctly British, but rendered obselete by the march of the mobile, the red telephone box is finding new purpose, as Rob Crossan discovers.

When George Orwell wrote his essay The Lion and the Unicorn in 1941, he may well have been leaning against something red, stout and, at that time, seemingly permanent as he eulogised about the quintessence of England being made of winding roads, solid breakfasts, green fields and ‘old maids biking to Holy Communion through the morning mists’.

Images of this bygone era, mythological or not, usually had one small structure at the margins of the frame. The Giles Gilbert Scott-designed red telephone box was, at the time of Orwell’s essay, fast becoming a de facto facility for every village in Britain. The peak, some five decades later, was reached with a total of 132,000 boxes across the UK. We all know what happened next. The advance of the mobile phone and the internet made this most venerable of creations all but redundant. The result is that, across the country, there are myriad phone boxes left unused and vandalised, with many on the cusp of being uprooted by BT. There’s only one phone box that’s become a stained-glass ‘colour therapy’ room. ‘It was a huge undertaking,’ recalls Val Meyer Hall, a retired teacher and textiles artist, who, with her husband, Laurence, has lived in the Suffolk village of Mellis for the past 10 years. ‘Neither myself nor many other people in the village knew the first thing about how to make stained glass.’

The village telephone box, lying dormant and unused back in 2011, was picked by the community to be the centre point for a village festival the following year. ‘There was an artist living in the village called Hilary Beal, who has since moved to South Africa,’ explains Mrs Meyer Hall. ‘She had a small studio in the village and, over the course of a few months, a few dozen of us created stained-glass windows for each panel of the phone box reflecting life on our local common.’

The laborious process of creating these panels was easier for some than for others. ‘I cut myself quite a few times and my clothes got damaged, but the result is incredible,’ she enthuses. ‘Every day, you see or hear a car screeching to a halt outside the box and the driver dashing out to take a picture.’

The ‘colour therapy’ room is indeed a handsome thing. With artificial grass on the floor and an adjustable stool, the idea is for anyone having a rough day to retreat inside the box and be enveloped in the light emanating from the stained glass, which depicts mushrooms, bees, carp and butter-cups. ‘The only thing we’re not sure about is who will maintain it,’ Mrs Meyer Hall ponders. ‘Gravel flying up from passing cars is pock-marking the box a little, but we’re all very proud of it. What I’d love to do is bling it up a little more with a chandelier hanging from the ceiling.’

Sight isn’t the only sense being aroused by Gilbert Scott’s creation. A few hundred miles north, two young entrepreneurs are up late at night, frantically baking lemon-drizzle cakes, millionaire’s shortbread and cookies to be delivered early each morning, seven days a week, to one of the most remote phone boxes in Scotland.

Cakes in the Call Box was opened earlier this year by Holly Ford and Bron Campbell, both based in the hamlet of Cladich, near Inverary in Argyll. ‘There’s no pub, no church and only about 30 people living here, so this has been amazing in giving our little community a focus point,’ explains Miss Campbell.

The box has an almost Tardis-like quality, given what’s packed inside. Alongside Holly and Bron’s cakes (reasonably priced at £1.50 per slice), there are homemade jars of jams and chutneys as well as a book swap and guest book for visitors to sign. ‘There’s nothing near the box but a field full of Highland cattle,’ says Holly, ‘but they seem to be doing their job as security. We haven’t had a single day so far when the honesty box didn’t exactly tally with how many cakes we’ve sold.’

Over in Branxton, Northumberland, another lonely box has become a suitably bijou and humble monument to one of the most ferocious battles ever waged on British soil. The Battle of Flodden, in 1513, was a pikes-and-bills-fought site of mass slaughter between the English and Scottish armies, culminating in the death of James IV on the field, the last reigning monarch to die in battle.

It’s believed that more than 10,000 Scots lost their lives in one of the most definitive English victories over their northern neighbours. ‘It was probably the most exciting thing that’s ever happened in our village,’ notes Clive Hallam-Baker, a leading member of the Remembering Flodden project and one of the people behind the conversion, in 2013, of a decommissioned phone box overlooking the battlefield into what has been described as ‘the world’s smallest visitor centre’.

‘The Scottish Government spent millions a few years back on a visitor centre for Bannockburn,’ explains Mr Hallam-Baker. ‘Of course, they weren’t so keen to spend money on commemorating a battle in which the Scots suffered such an awful defeat. Our phone-box visitor centre is an ironic riposte in some ways, as well as being something that I think is genuinely useful.’

From the box, situated on the village green of Branxton, visitors can spot the memorial, erected in 1910, that marks the top of the oft-marshy, boggy fields where so many Scottish soldiers died in little more than three hours of bloodshed. It contains walking maps of the area and a listening device, on which, should you press a button, you’ll hear a three minute mini-guide to the story of Flodden, narrated by Mr Hallam-Baker.

With plans for a second miniature visitors centre to be opened next year in the nearby village of Carham, to commemorate the 1,000th anniversary of another cross-border battle, Mr Hallam-Baker believes that the phone box perfectly captures the essence of the atmosphere that still pervades here.

‘We had a labrador a few years back that simply refused to walk on the battlefield,’ he reveals. ‘Even now, when I walk across it when the skies are brooding, I get a twinge of something, a feeling of the events that happened here all those centuries ago.

‘It doesn’t feel appropriate to have any sort of bombast about a battle site where so many people died. A phone box is just right for a place like this.’ 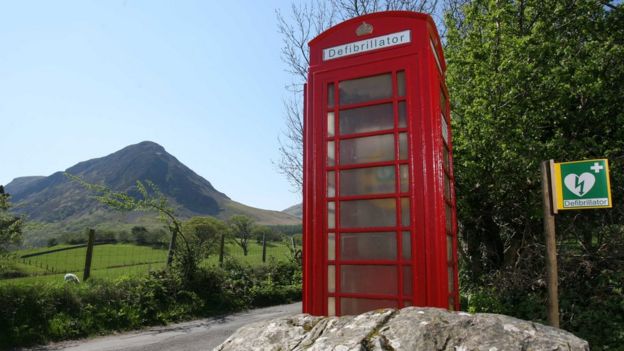 A visitor picks up books from a converted red telephone box, on Lewisham Way, in London | Photograph: Alamy

This brilliant beach shower is in Leverick Bay in the British Virgin Islands.

The Edinburgh New Town celebrates its 250th anniversary this year. Here are some stunning shots of this sublime example of

When partaking of a piping-hot cup of tea and a crumblingly delicious slice of cake, where better to indulge than