The Grade I-listed Holme Hall is a magnificent 17th century house that has been painstakingly restored, yet remains entirely true to its original spirit.

The High Peak District of Derbyshire hides its secrets well. When, in 1698, the intrepid English horsewoman Celia Fiennes rode from Chatsworth to Bakewell in the picturesque Wye valley, she described the pretty market town as ‘standing on a hill, yet you descend a vast hill to it which you would think impossible to go down… the common people here know not above 2 or 3 miles from their home, but they of the country will climb up and down with their horses those steep precipices’.

From the 17th century onwards, wealthy Derbyshire mine-owners built fine country houses on the steep hillsides of the Peak to make the most of spectacular valley views, using the region’s natural contours to create impressive terraced gardens.

Such a house is imposing, Grade I-listed Holme Hall near Bakewell, which stands in more than four acres of historic gardens on the eastern bank of the River Wye that runs through the town. Meticulously restored by its current owners, who bought the house in 2009, Holme Hall comes to the market at a guide price of £3.75 million through Derbyshire agents Caudwell & Co.

Research assembled by the hall’s owner, John Stansfield, reveals that the main part of the present house, which incorporates an earlier 15th-century building, was built between 1626 and 1628 by Bernard Wells, a successful lead merchant originally from Gloucestershire. The new house was reputedly based on plans for smaller Italianate villas by Elizabethan architect Robert Smythson, the designer of Hardwick Hall near Chesterfield, now owned by the National Trust. 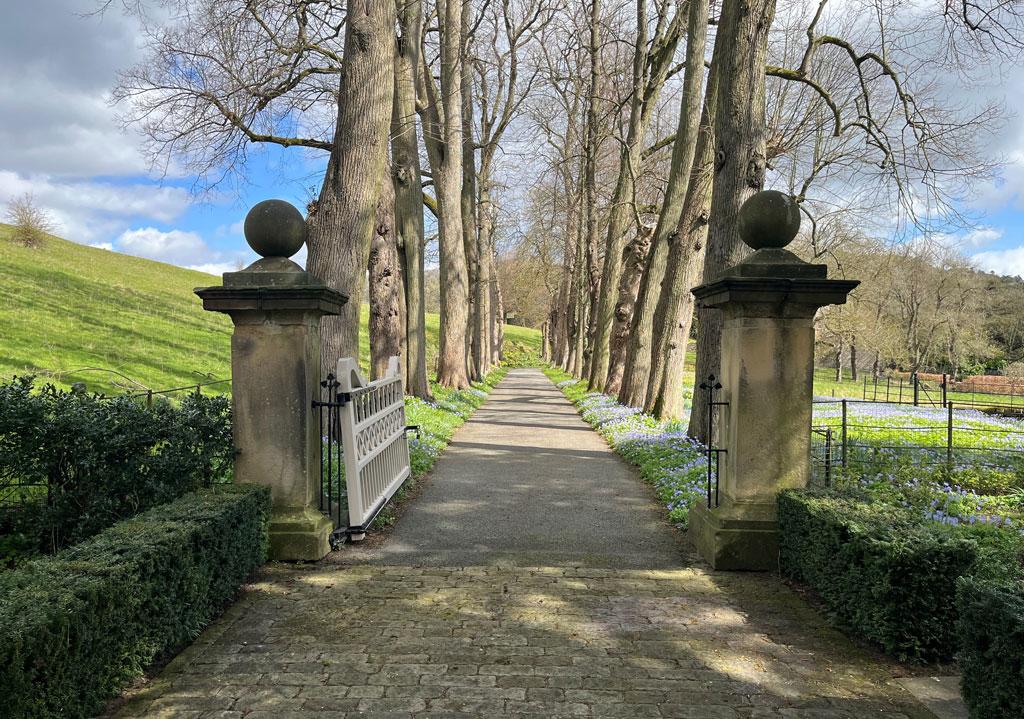 Wells left Holme Hall to his daughter, Anne, and her husband Robert Eyre of nearby Highlow Hall, whose family had long been involved in lead mining. In 1658, they expanded Holme Hall with the addition of the east and west wings. Eyre also oversaw the creation of Holme’s magnificent terraced gardens, which still include the stone-built, Grade II-listed Banqueting House and the romantic Prospect House or belvedere, with its commanding views over Bakewell and down the Wye valley.

Robert and Anne’s eldest son, William, who was Sheriff of Derbyshire in 1691, inherited the Holme and Highlow estates, which then passed to his son, also William, following his death in 1706. This William became a barrister at Gray’s Inn and, having inherited by marriage a further portfolio of estates in Essex and elsewhere, changed his name to Archer and thereafter spent little time in Derbyshire.

In about 1720, William’s widowed mother, Catherine, wrote to complain that ‘ye county report that ye come no more to Holme… I hope you’ll restore it to me, for I think I have a right to it’. She later bemoaned the state of the grounds at Holme Hall, advising him that ‘the Arch at Holme Garden is Ready to fall in: and if Itt be Repaired speedily Itt May save a great deal of money: Else the Battling (battlements) and the Stairs And the face of ye Arch Will be Broken to pieces by the fall… tis said you will be Much Reflected on Having such an Estate if you let such a place as Holme go to Ruine for want of a little Repair’.

In the event, William had his younger brother, John, and his family installed as tenants at Holme Hall for a period of 10 years from 1721 until 1730, when John inherited Hopton Hall near Matlock, and changed his name to Gell (Property market, February 15, 2022). During his tenure, John managed his brother’s Derbyshire estates and carried out numerous repairs to the grounds of Holme Hall, including, in 1724, that of the aforementioned stone arch, which still stands to this day.

William Archer (formerly Eyre) borrowed heavily on his estates, as did his son and heir, John, who was effectively bankrupt at the time of his death in 1800. In 1802, the Archer estates were sold by order of the Court of Chancery; Highlow Hall was bought by the Duke of Devonshire and Holme Hall by Robert Birch.

Birch, too, eventually encountered financial problems and, in 1854, Holme Hall was purchased by the Gisborne family, who owned it until 1912, when it was leased and then sold to Edward Lascelles Hoyle. He had the hall overhauled and restored and lived there until after the Second World War. It was sold again several times before the current owners bought it and embarked on a further renovation of the house and grounds.

During their time at Holme Hall, Mr and Mrs Stansfield have not only updated the main house, which boasts more than 10,000sq ft of well-structured living space on three floors, including four reception rooms, games room and cinema, large kitchen/breakfast room, grand master suite, six/seven further bedrooms, three bath/shower rooms and two further dressing rooms, which could be converted to additional bathrooms.

They are rightly proud to have continued the restoration of the gardens to their original early 1660s layout, facilitated by very detailed sketches, plans and a poem about the estate (possibly by John Eyre), which are held in the Bagshawe Collection of the Derbyshire archives.

Holme Hall in Derbyshire is for sale at £3.75 million — see more details and pictures.