The fine weather has arrived in time for half-term, and with children across the nation on holiday here's our list of suggestions for things to do.

Days out with children tend to fall into one of two camps: those places which offer temporary, visceral thrills, or those that deliver a more satisfying and edifying experience. Children, unsurprisingly, favour the former while parents and grandparents would much rather opt for the latter. Legoland is probably about as good a chance as you’ll have of ticking both boxes at once – at least for children up to the age of about 11 or 12.

Just outside Windsor, and easily reached from the M3, M4 or M25, this vast site is part theme park – complete with roller coasters and that type of boat ride which will see you soaked from head to foot in the name of fun – and part lego display.

It’s a fascinating mixture. Overhead trains run alongside life-size giraffes made from plastic blocks, young hands can guide jets of water from lego-themed fire engines to douse imaginary flames, and battery-powered cars are driven by gleeful children through a toytown, carefully obeying the Lego traffic lights as they do so (unless they steam straight across the junctions, like one little tyke we saw).

While there are plenty of rides available, it’s heartening to see that at the very centre of the park remains the brick display, where truly magnificent recreations of cities and landscapes across the world – from the wilds of Scotland to Canary Wharf, and from the canals of Holland to the faux-pyramids of Las Vegas – really have to be seen.

One or two parts of ‘Miniland’, as it’s dubbed, could do with a bit of TLC, but the work of renewal appears to be under way, and a new display of American landmarks was a treat, featuring among other things a magnificent Empire State Building which must have been a dozen feet high.

There’s also, as you’ll have seen at the top of this page, a brilliant recreation of a recent wedding…

The park’s themes more or less follow the Lego sets available – Pirate Shores, Ninjago, Land of the Vikings, Kingdom of the Pharaohs, Lego City, Duplo Valley, Knights Kingdom and so on – each with appropriate rides and displays.

The rides are thrilling without being genuinely hair-raising – the two dragon-themed rollercoasters are great fun without sparking fear, and only the surprisingly startling ‘Mia’s Riding School’ made our seven-year-old think twice about going back for a second go.

Mia’s Riding School at Legoland: Sounds docile, is actually somewhat terrifying (much to the delight of the riders)

The down sides? Well, there are queues of course – solvable at a price with the brilliantly clever, if pricey, Q-Bot system (it starts at an extra £20 each for the standard version, up to £80 for the ultimate queue-jumper’s dream) which saves you from actually having to stand in lines for more than a few minutes. Food and drink prices were a little steep, too (£3 for the sorriest-looking Mr Whippy ice cream I’ve ever seen in my life) while charging an extra £6 for parking seems borderline outrageous. How on earth else are you supposed to a place that’s almost four miles from the nearest station?

That said, those are minor annoyances, not least because our children (aged 5 and 7) came away not grumbling about when we might go back, but instead enthused about going home and building their own Lego creations. If there’s a better day out in the south east of England for pre-teen children, we’ve yet to see it.

Legoland Windsor day tickets cost from £32 to £60, depending on the when you go and how far in advance you book. Vouchers and promotions are often available (Kellogg’s cereal have long offered two-for-one deals, for example) while annual passes currently start at £49. www.legoland.co.uk

It’s not quite a safari, but kids will love the tractor and trailer safari through Attingham to find out more about the wildlife that live within the walled park. £4.50 adults, £3.50 children, plus normal National Trust admission.

The biosphere park has a string of events over half-term to mark the opening of a new exhibition, Invisible Worlds, which has interactive exhibits, artwork and hands-on experiments looking at the microscopic life all around us, and how it interconnects with Earth’s environments at every scale.

One of the National Trust’s most beloved spots has a ‘great inventors’ trail this half-term, inspired by former Petworth resident and famed inventor Elizabeth Ilive.

Alnwick recently won the top family day out award at the UK Heritage Awards, with judges saying that ‘a family visit to Alnwick Castle promises a true cornucopia of entertainment.’ And the Harry Potter fans in your family will be thrilled to notice that it was a much-used film set for the wizarding movies. As if that weren’t enough, jousting and fighting knights are among the half-term thrills on offer. £16 adults, £8.50 children – and you can return as often as you like for a year. 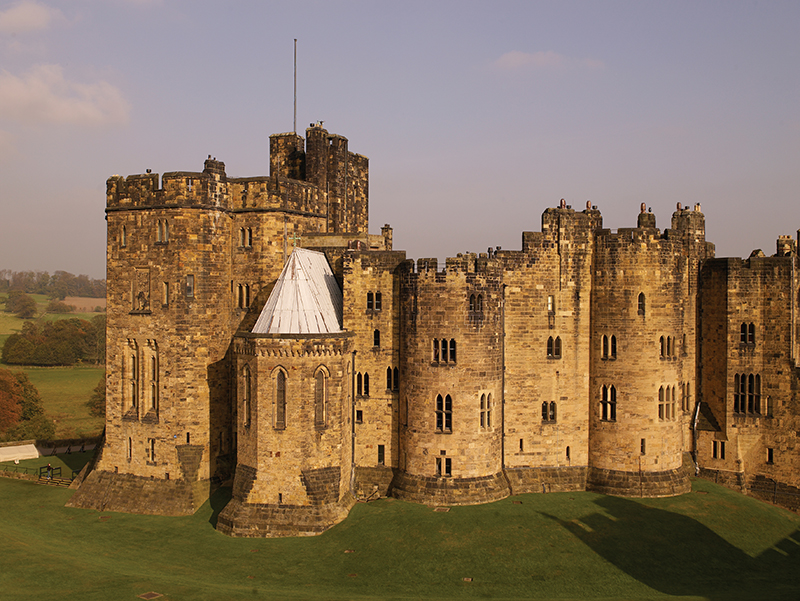 There are events at various locations across the Chilterns – roughly from Reading to Luton – with walks accompanied by expert guides, enjoying spectacular views, local stories and fun activities.

The popular kids’ history books are turned into live stage productions looking at the Victorians and the Georgians. Tickets are £12/£7, while combined tickets for the performances plus entry to the palace, maze, gardens and the Magic Garden are £28 for adults and £14 for children.

If you're looking to make more of life in Britain over the next 12 months, Country Life's suggestions are here