As Surrey sets the pace in the country-house market with the recent launch onto the market of high-profile contenders such as Fridley Manor at Mickleham, Shootlands House at Abinger Common and Chinthurst Hill at Wonersh—priced at £4 million, £3.5 million and £18.5 million respectively—today’s Country Life goes public on the sale of the iconic Dunsborough Park estate at Ripley, near Woking, at a guide price of £17 million through Savills in Weybridge (01932 838004) and London (020–7016 3780).

Dunsborough Park was originally part of the substantial land holdings of nearby Newark Priory, founded by Augustinian canons in the early 12th century and sacked on the orders of Henry VIII at the dissolution of the monasteries in 1538. The Dunsborough lands were granted by the King to a local nobleman and, soon afterwards, a modest Tudor farmhouse with a single, central chimney was built on the site.

Extended by a succession of wealthy owners over the centuries, that simple building forms the core of grand, Grade II-listed Dunsborough House, which today stands in 108 acres of park and pasture, dotted with fine trees and woodland and skirted by the meandering River Wey.

In the 18th century, the estate was acquired by George Onslow, 1st Earl of Onslow, a well-connected politician who was made surveyor of the king’s gardens in 1760 and, a year later, succeeded his father as MP for Surrey. During their tenure, he and his family carried out a series of extensions and alterations to the main house, which was refaced in the 18th century, with the addition by Lady Onslow of the formal morning room and drawing room. Dunsborough’s first formal gardens were laid out at about the same time. 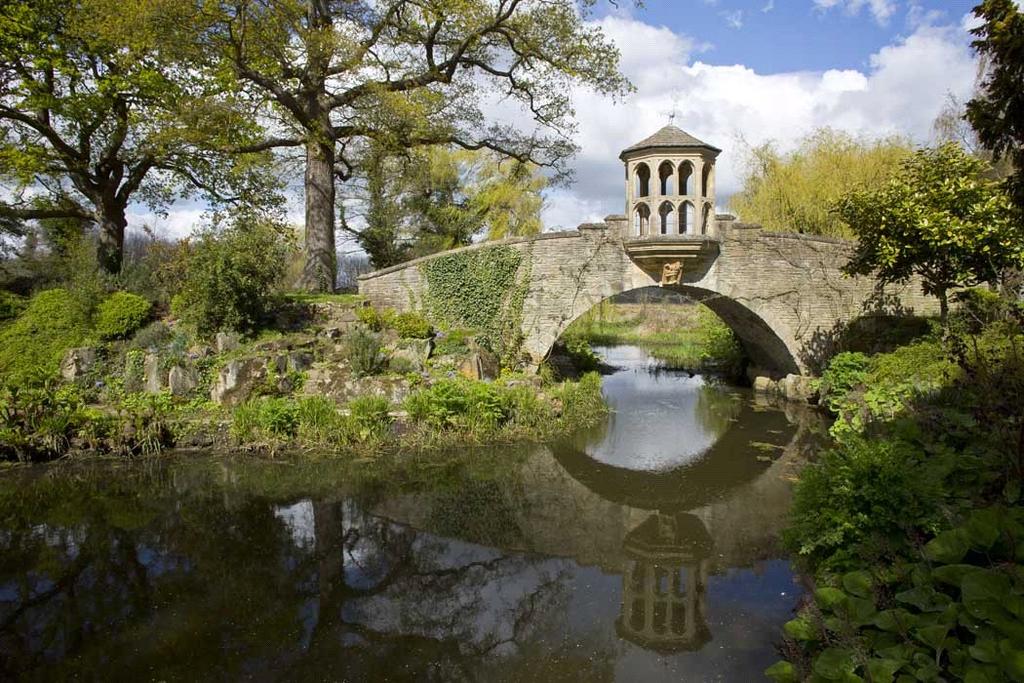 Further significant alterations were carried out by the aviation pioneer, aircraft engineer and Conservative politician Oliver Simmonds, who bought Dunsborough with 90 acres of land in the 1930s and had the Tudor-style gatehouse built at the entrance to the park. He also added the octagonal pump house, the picturesque bridge overlooking the lake, the pavilion, the greenhouses and the ha-ha. In 1948, following the collapse of the aviation industry after the Second World War, Simmonds sold his British interests and moved to the Bahamas.

Dunsborough Park was bought the same year by the irrepressible Charles Hughesdon, described in his Daily Telegraph obituary on his death, at the age of 104, in April 2014, as ‘a daredevil aviator, champion ball- room dancer, insurance broker and airline executive who married the film star Florence Desmond, and boasted of affairs with Shirley Bassey and Margot Fonteyn’.

One of the main areas of note in the spectacular gardens is the Dutch garden, which hosts a Festival of Tulips each April.

Marriage to Florence, who starred alongside George Formby and Douglas Fairbanks Jr in the 1930s and 1940s, brought a stream of celebrity house guests from the worlds of entertainment, film, politics and business for riotous weekends at Dunsborough Park.

Florence died in 1993, after which Charles married their long-time friend Carol Havers, mother of the actor Nigel Havers. A year later, in 1994, he and his new wife moved to Berkshire and Dunsborough Park, with 64 acres, was sold to the current vendors, Baron Dolf and Baroness Caroline Sweerts de Landas Wyborgh.

The new owners were less attracted by the house, which was in a state of quite serious disrepair, than by its location 26 miles from central London and the potential of the estate’s historic formal gardens as a showcase for the Baron’s vast collection of antique garden statuary and artefacts.

They immediately embarked on a thorough renovation of Dunsborough House, a major undertaking that involved re-roofing, rewiring, re-plumbing and redecorating throughout. Original 18th-century features such as wood floors, panelling and fireplaces were carefully restored, walls in the formal reception rooms were lined with silk rather than conventional wallpapers and an artist was commissioned to paint the dining room with a landscape of trees and long grasses.

Dunsborough House has been totally refurbished by the current owners to create a stylish yet comfortable family home.

Successive owners of Dunsborough Park had retained the traditional strict division between family rooms and the servants’ quarters, where no windows were permitted to overlook the gardens, in order to protect the privacy of family and guests. The Baroness did away with this archaic arrangement by moving the kitchen from the east side of the house to its heart and converting some old-fashioned domestic offices to one light, bright family room leading to a large conservatory overlooking the gardens.

Upstairs, a warren of former servants’ bedrooms was converted into suites for the children. In all, the house boasts 9,617sq ft of light and cheerful living space, including five reception rooms, 7/8 bedrooms, seven bathrooms, a kitchen/breakfast room, a conservatory, a family room and various utility rooms.

Although Dunsborough Park has been the happiest of family homes for the Sweerts and their four children—the eldest is now 30 and the youngest, 24—for the Baroness, life revolves around the estate’s spectacular formal gardens, of which only the basic structure remained when the couple first bought the property. 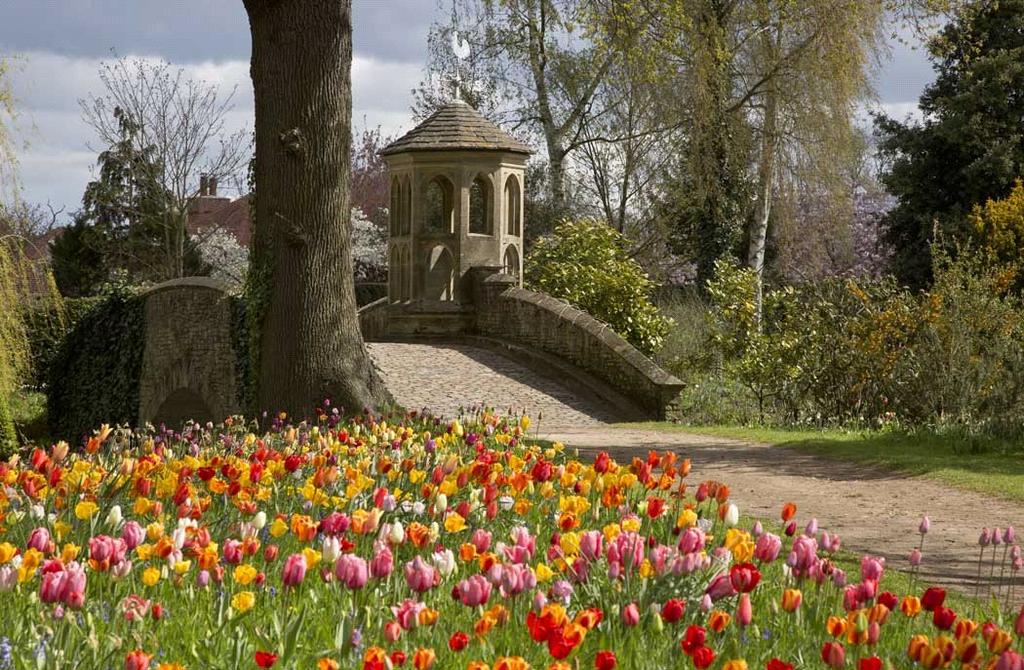 They were reopened to the public in 1997, following an initial restoration of the walled gardens by Penelope Hobhouse and the division by Simon Hobhouse of the older walled garden into ‘rooms’ for the display of statuary. The borders were replanted by Rupert Golby in 2005, to create the softer, blue-and-white colour scheme that is preferred by the Baroness.

Writing in Country Life (June 8, 2011), Gardens Editor Kathryn Bradley-Hole highlights the importance, from a garden lover’s point of view, of this intensively cultivated area, within and around the high walls of which ‘Baron Dolf and Baroness Caroline have spent nearly two decades and a great deal of investment in creating a series of well-proportioned garden enclosures, each with its own character’.

The result, Mrs Bradley-Hole finds, is ‘a pleasing blend of the Dutch aesthetic for straight vistas, formal parterres and restrained avenues with a more English sensibility for floral abundance’. 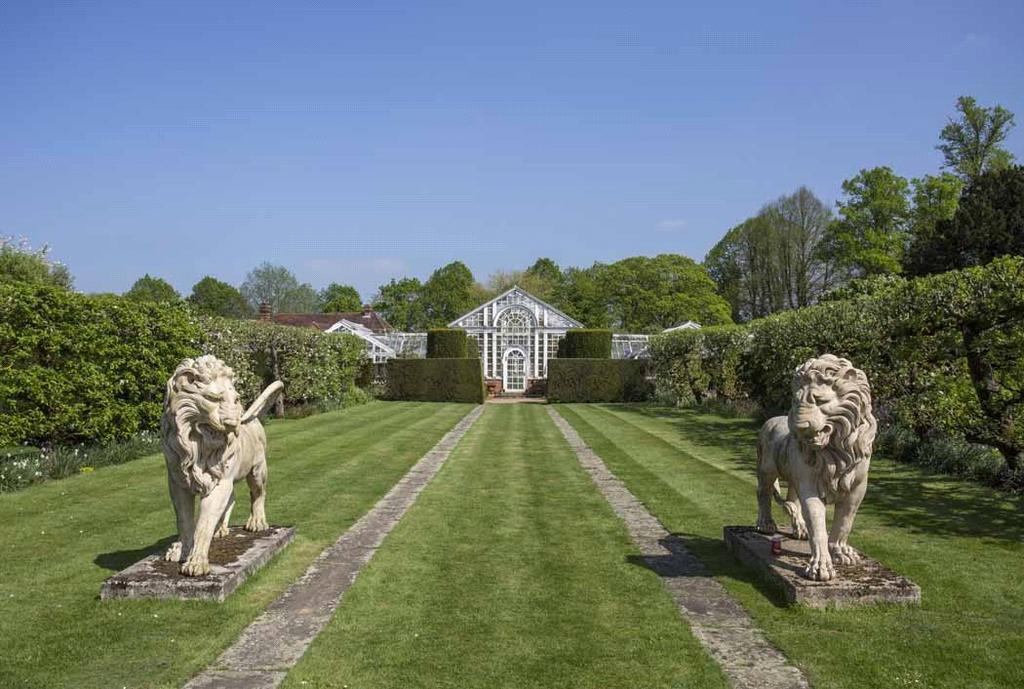 The ‘English exuberance’ that is so much a part of the ethos of Dunsborough Park is expressed throughout the estate’s many gardens, notably in the four main areas of the walled gardens, at the northern end of which is the Dutch garden with its vast array of tulips—a key element of the annual Dunsborough Park Festival of Tulips, which, this year, takes place on Sunday, April 16.