As the barometer of global wealth moves inexorably from west to east, the launch onto the open market of iconic Grade II-listed Cherry Hill in Portnall Drive, Virginia Water, Surrey – at a guide price of £30 million via Knight Frank – provides the year’s first serious test of an exclusive international market currently dominated by buyers from South-East Asia.

The striking Modernist building, with its distinctive flat roof and sweeping, white-rendered elevations, curved staircase and slender, steel-framed, curved stair window, was designed by the architect Oliver Hill for Katherine Hannah Newton, whose wealth derived from her family’s important coal-mining and heavy industrial interests in the north of England.

The house was originally called Holthanger – the name by which it was known when featured in Country Life in 1935 – then Southern Court and finally Cherry Hill, following its acquisition in 1958.

The buyer then was the newly appointed US ambassador to Britain, John Hay Whitney – a multi-millionaire publisher, art collector, philanthropist, investor and connoisseur of racing Thoroughbreds. He renamed the property after the exclusive Cherry Hills Country Club in Denver, Colorado, where he and Dwight D. Eisenhower often played golf, close to the President’s ‘Summer White House’.

A generous and thoughtful host, Whitney entertained lavishly – and largely at his own expense – and forged lasting friendships with the Royal Family and members of the British Establishment.

He retained his close links with Britain long after the end of his four-year term, returning to Cherry Hill each year to entertain his friends for golf at Wentworth or racing at Ascot. He continued to own his Wentworth property until his death in 1982, having made a number of discreet alterations to the house and grounds.

Thereafter, Cherry Hill entered a period of decline – desecration, even – during which a subsequent owner added some unsightly extensions to the main house and decorated the interior in an unsuitably elaborate style. Worse still, he applied to have the building listed for preservation by English Heritage, which duly happened in 1986.

This being the height of the 1980s residential property boom, an English Heritage listing was considered by some to be a badge of distinction. In the case of Cherry Hill, it was more like a disaster for developer Tejit Bath, when, in 2007, he embarked on an ambitious project to restore and revive the dilapidated building, upgrading it to the standards of design, comfort and functionality demanded by today’s global elite.

Love it or hate it, Hill’s masterpiece remains the only listed house on the Wentworth Estate, following the illegal demolition of Greenside, another Modernist building, in 2003.

Inevitably, when Mr Bath submitted his plans for the reconstruction of Cherry Hill, there ensued a long-running battle with English Heritage, the Twentieth Century Society and Runnymede Council, before the plans were finally approved.

The painstaking rebuilding process took four years to complete, but earned Mr Bath – who cheerfully claims to be ‘Britain’s slowest developer’ – the approval of Prof Alan Powers, a leading expert on 20th-century British architecture and architectural conservation and former chair of the Twentieth Century Society.

‘Cherry Hill was calling out for love and understanding and was fortunate to be rescued and treated with such sympathy by a new owner who recognised the potential of the house when nobody else seemed interested,’ says Prof Bath.

‘A listed house in poor condition, even in a place such as Wentworth, would not be everyone’s idea of an easy life.

‘The next good fortune was that the architect employed to get listed building consent was John Allan of Avanti Architects, the most experienced in Britain in the field of bringing neglected Modernist buildings back to life.

‘The combination of styles in the old and new work at Cherry Hill is a very positive addition to the story of the house.’

Architect John Allan clearly relished the project from the start.

‘Entering the gently curving driveway to the property, one could be forgiven for imagining that you’re about to arrive at the doors of yet another neo-Georgian mansion nestled within the rarefied location of the Wentworth Estate,’ he says.

‘However, from the moment that Cherry Hill comes into view, it’s clear that this is no ordinary house. It’s rare to find a Modernist house in such a generous setting.

‘Its unique location, standing on the middle island at the heart of the Wentworth estate – alongside, but unseen from the fourth fairway of the famous golf course – was one of many reasons for choosing to restore Cherry Hill.’

For inspiration, architects Avanti and developer Mr Bath looked beyond Hill’s portfolio to the work of his contemporary, the German-born Mies van der Rohe.

Two buildings in particular struck a chord: his Barcelona Pavilion, built for the 1929 International Exposition, and its contemporary, the Villa Tugendhat at Brno in what is now the Czech Republic, a UNESCO World Heritage Site.

Villa Tugendhat was the first example of the use of a steel structure for a family home and, more recently, the model for the Landauer House in Simon Mawer’s novel The Glass Room, which was a strong contender for the Man Booker prize in 2009. 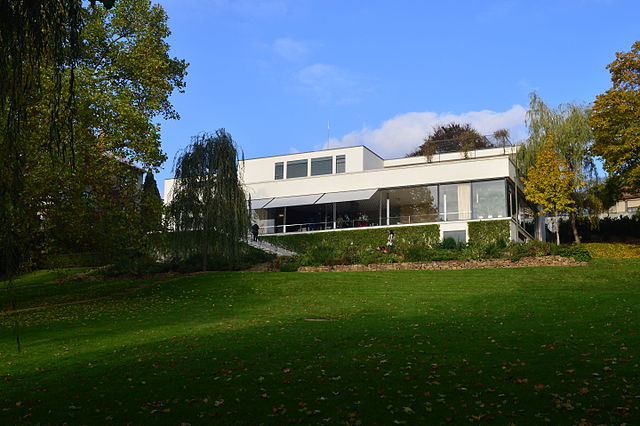 Mr Bath was inspired, not only by the architecture of the Villa Tugendhat, but by the palette of beautiful materials used by van der Rohe – onyx, Verde Tinos marble and dark-wood veneers – which perfectly matched his vision for Cherry Hill.

His search for unique building materials took him on an odyssey: to Greece for the Verde Tinos marble used for the terrace wall; to Carrara, Italy, for the Onyx Kilimanjaro from Tanzania used for the almost four-ton living room wall;to the quarries of Alicante, Spain, for the rare ivory Crema Marfil marble used for the polished floors of the ground floor; and to the Italian mountains for the zebra-veined, white Calacatta marble used for the lady’s bathroom.

This passion for perfection is reflected in every aspect of Cherry Hill’s revival. The in-filled east courtyard has been rebuilt to house a basement cinema, study, laundry and wine cellar, with a subterranean link to a new, stand-alone pavilion providing guest accommodation, a plant room and a garage.

To the west of the main house, a complete new wing has been built beyond the defining curved wall of Hill’s original design. Planned on three levels, this provides a generous, part-double-height reception room, two guest bedrooms, a spa and relaxation suite and the house’s most dramatic contemporary feature: an underground swimming pool with a descending floor.

Cherry Hill is for sale via Knight Frank – see more details and pictures. You can also see the owners’ video of the property, or request more information, at www.modernistmasterpiece.com.

The world's super-rich are shrugging off the uncertainty that permeates the world and heading to the Wentworth Estate. Penny Churchill

Interior designer Bunny Turner has indulged her passion for art by transforming her bedroom into her own private gallery.