The British love animals, and we love pubs. What could be better than a combination of the two?

Britain’s pubs have all manner of colourful names, and after this list caught our eye the other day we thought we’d take a look a look at some of the best animal-related pub names in the country.

Have you got a pub with a great name near you? Send your suggestions to country_life_digital@timeinc.com. 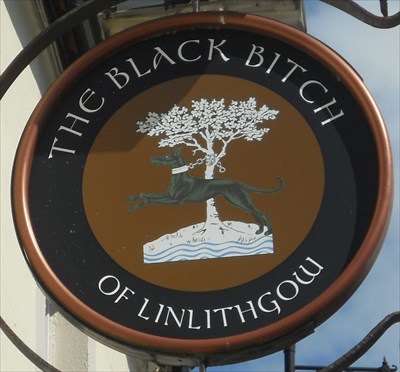 People born in Linlithgow are apparently  known as “black bitches” – a name which derives from the fact that the burgh’s coat of arms features a black greyhound chained to a tree. The origins of that image, however, are murky: the most popular of several rival explanations is that the dog’s owner was punished for a crime by being exiled to an island in Linlithgow Loch, where the authorities intended that he should starve to death. His dog did its best to save him: the tried to swim across the loch to bring her master food, only to be chained up to stop her saving him. The dog’s loyalty and perseverance earned it this place in posterity.
(The Black Bitch Pub; 01506 842 147) 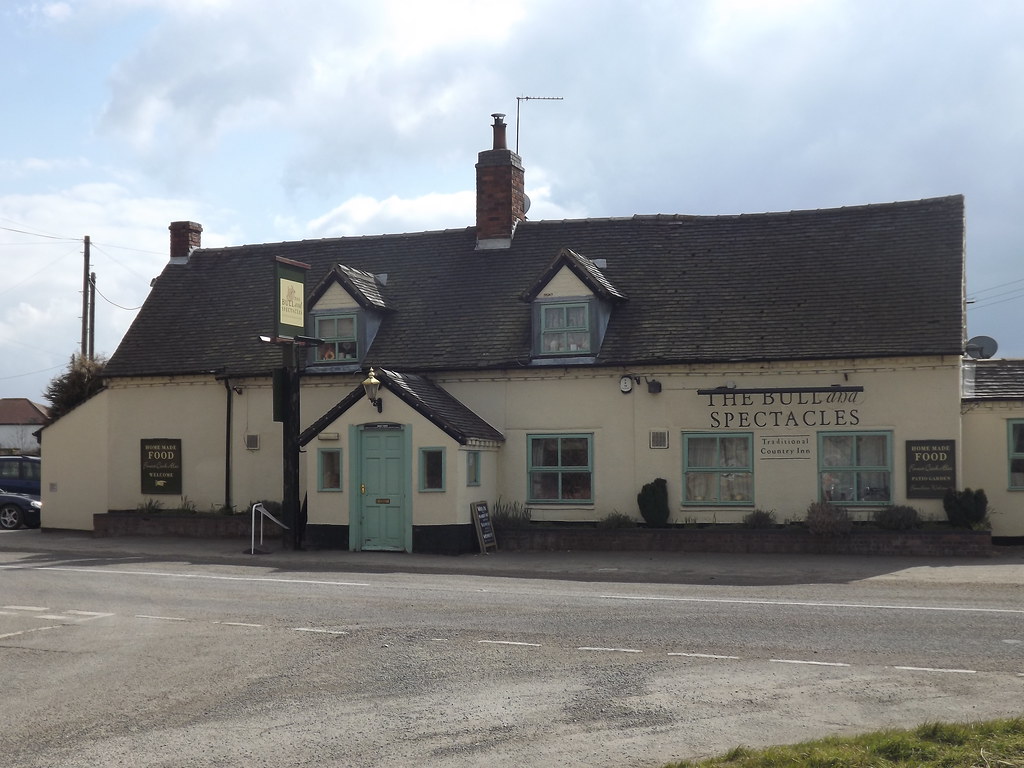 This pub in the Staffordshire town of Blithbury derives its name from a strange incident that drew an even stranger suggested solution. A local bull took ill after eating poisonous berries, leading a local pub bore to suggest that the bull needed glasses to prevent it from happening again. Nonsense, of course; how would the bull have managed to fit in the optician’s chair to get his prescription?
(The Bull and Spectacles; 01889 504201) 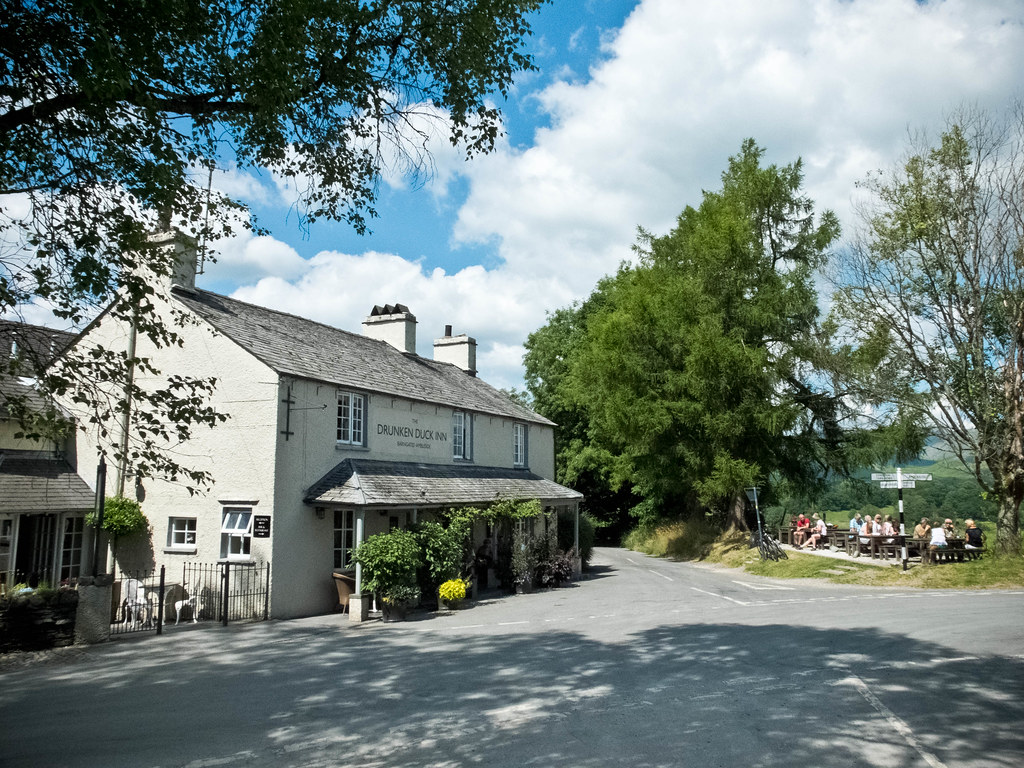 A 19th century landlady of this lovely Lake District pub apparently found a group of ducks lying still on the floor of her cellar, seemingly having expired after drinking beer split across the floor. The story goes that she assumed them to be dead, she prepared them for cooking – only for the ducks to regain consciousness just as they were about to be put into the oven. Quite how the ducks managed to sleep through their plucking, gutting and stuffing is, sadly, not recorded.
(drunkenduckinn.co.uk; 015394 363 47)

This sounds rather charming – you’d imagine a venerable old horse, put to retire in peace despite having lost a leg in some sort of accident after a life of faithful service. It’s no such thing: a ‘three-legged mare’ is actually medieval term for a gallows that can hang three people at once. Delightful.
(www.threeleggedmareyork.co.uk; 01904 638246) 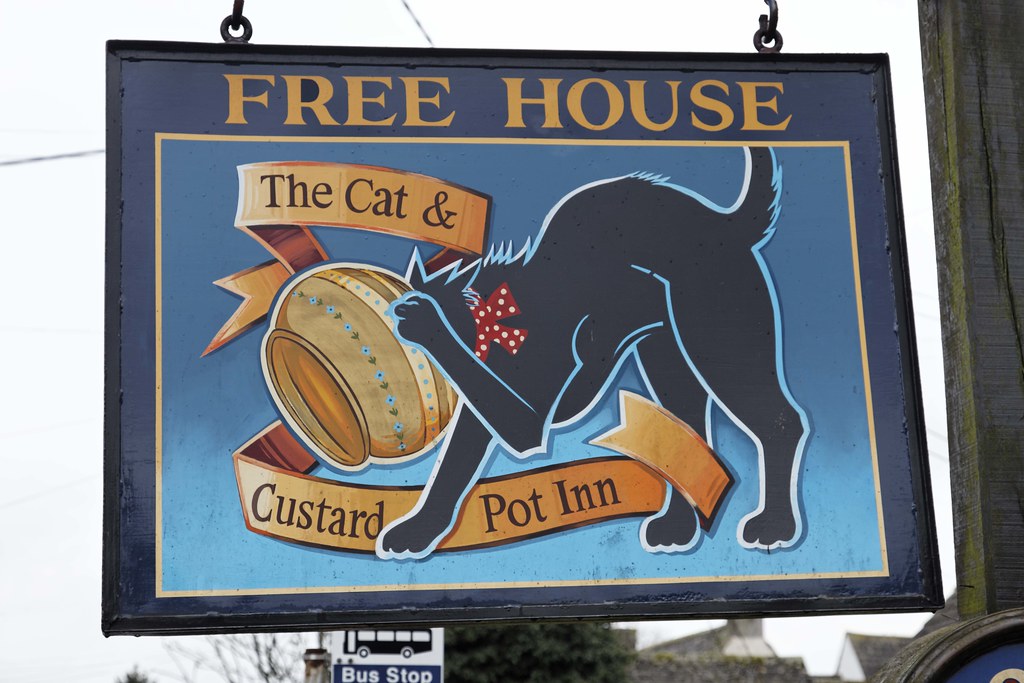 There’s no story of cats springing out of custard at this place in the heart of the Cotswolds – the name instead comes from a novel called Handley Cross by R S Surtees, which referred to ‘Cat and Custard Pot Day’. Back in the 1920s the landlord decided it would make a fine name for his pub.
(catandcustard.co.uk; 01666 880 249)

The Swan With Two Necks 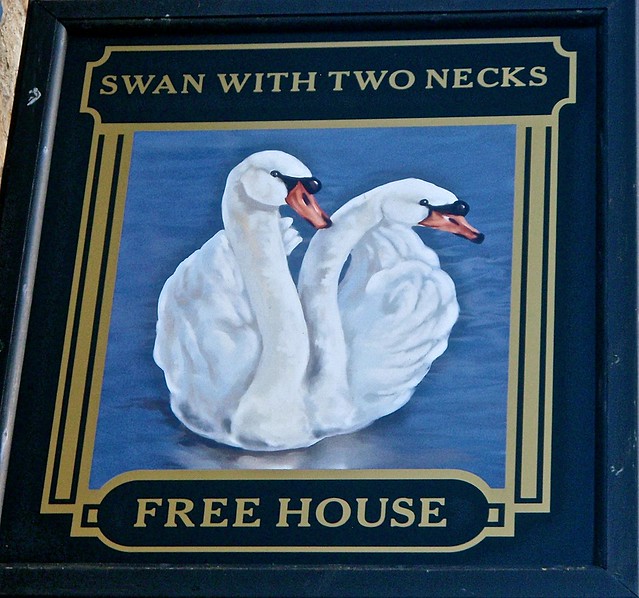 There are a several pubs in Britain that share this name – this picture comes from one in Staffordshire. The name dates back to Elizabethan England when Good Queen Bess gave swans as gifts, the lucky recipients marking each of them with two ‘nicks’ to mark them. Over the years, this was corrupted into ‘necks’; future genetic research, of course, may one day mean that this name can be used more literally.
(theswanwithtwonecks.co.uk; 01782 680 343) 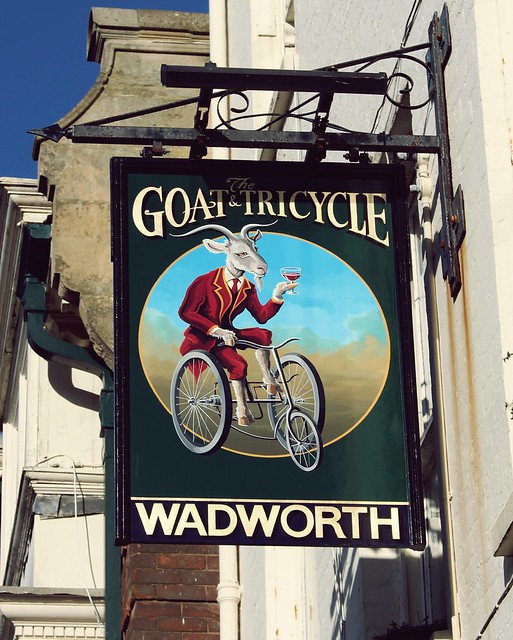 Disappointing news on this brilliantly-named place in Bournemouth: it is one of a number of modern pubs which has plucked a name from thin air purely for the giggles. Perhaps it was always thus; one day, someone will cook up a fine story about a plucky goat who escaped from a farmyard and was found in a child’s cycle shop sitting astride said tricycle; and in 200 years’ time it’ll be repeated on lists such as this.
(www.goatandtricycle.co.uk; 01202 314 220) 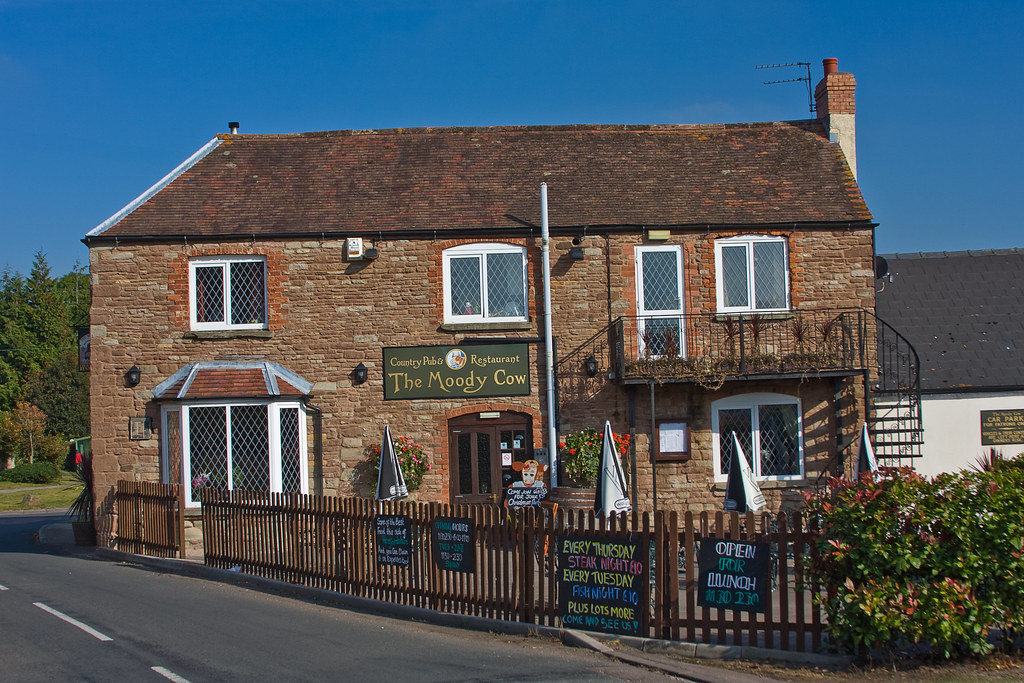 Upton Bishop used to be home to the Wykham Arms, but it was renamed at the turn of the 21st century, by a new landlord trying to earn himself a bit of PR with an ironically-offensive new name. He rather unconvincingly deflects allegations of sexism by pointing, disingenuously, to the pictures and statues of cattle which adorn the pub.
(www.moodycowpub.com; 01989 780 470) 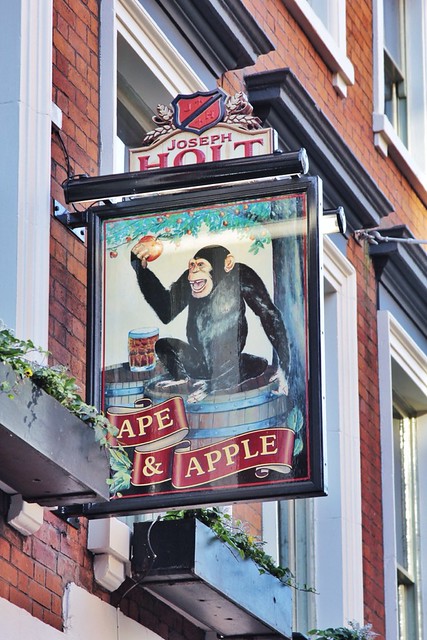 The Ape & Apple in Manchester is just 20 years time, so it’s not a historic name – but it is an interesting one. The chimpanzee holding an apple while sitting atop a beer barrel with a pint of foaming ale at his side is said to be a twist on the bible’s creation myth: the ape has eaten the forbidden fruit, with his resulting loss of innocence sped up via the invention of beer.
(www.joseph-holt.com/pubs/view/ape-and-apple; 0161 839 9624)

This gastropub was the oddly-named ‘British Larder’ until 2015, when the owners wisely came up with a new moniker that conjures up an image of one of the many local pigs from the surrounding Suffolk farmland breaking into the bar and causing havoc.
(theunrulypig.co.uk; 01394 460 310) 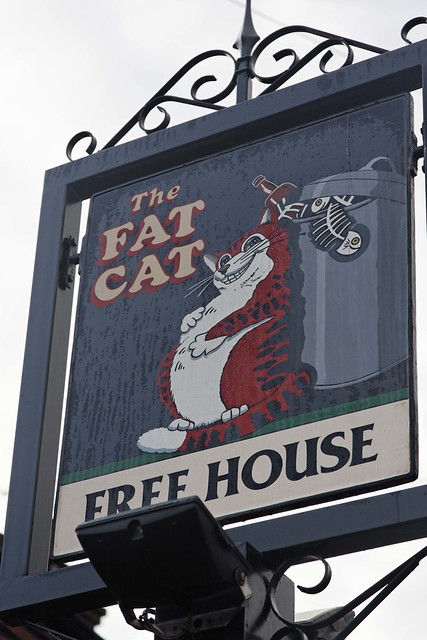 This Norwich pub opened for business in 1991, in the depths of the recession that followed the 1980s financial boom, and in the same year that the notorious Robert Maxwell went over the side of his boat. Owner Colin Keatley claims he just likes the rhyming name, but it’s hard not to imagine that Maxwell wasn’t at least somewhere in the back of his mind.
(www.fatcatpub.co.uk; 01603 624 364) 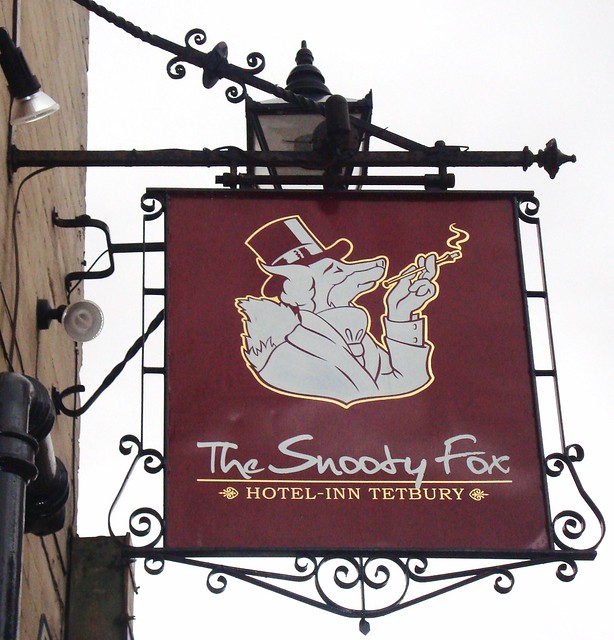 This Tetbury pub was, boringly, called the White Hart until the 1970s when owner Maxwell Joseph came into conflict with the Beaufort Hunt, who apparently black-balled him as they disapproved of him having made his money in industry. They’d been happy to hold meetings in the pub for many years, however, and Joseph retaliated by barring the lot of them. He renamed his establishment the Snooty Fox in their honour – and even had a stuffed fox at the entrance for many years…. until it was stolen just a few years ago, bringing a new meaning to the phrase ‘fox hunting’.
(www.snooty-fox.co.uk; 01666 502436) James VI of Scotland (and later James I of England) was said to frequent this Edinburgh pub in the 1580s, and apparently inspired the name itself when he gave an ornate ram’s head snuff box to the landlord – whether as a token of gratitude or to clear a tab isn’t entirely clear. There is an alternative explanation involving ‘sheep’s heid broth’ (i.e. soup made from sheep’s heads) as the pub is close to former grazing land in nearby Holyrood Park.
(www.thesheepheidedinburgh.co.uk; 0131 661 7974)

Are any of our favourite pubs local to you?