From spotting a dud diamond to mixing the perfect martini, there are some life skills every gentleman ought to know. James Fisher canvassed experts in their respective fields to bring us the definitive how-to guide.

Like a jelly on a tumble dryer, the expectations of a gentleman are constantly shifting. Mostly, this is a good thing: the myths that men must love sport, never cry and seal away their emotions have thankfully been debunked.

However, certain skills appear to be slipping away from the gentleman’s repertoire, such as making a good martini, spotting a decent diamond and the ability to not embarrass yourself on a dance floor. Below, we outline just a few things that Country Life believes every modern gentleman should know.

There are many legitimate fears in life, such as bears, sharks and voicemail. The dance floor is not one of these. The modern gent should be able to hold his own when the music starts and, as our own agony uncle Kit Hesketh-Harvey tells us, you don’t need to have completed a stretch on Strictly to make an impression.

‘So bad am I at dancing that my wife, who was in Hot Gossip, virtually made it a pre-nup,’ he says.

‘Last time I did the West End, it took them three weeks to teach me the basic waltz step. But I do have three bluff-it-out templates for when there’s no escape.

‘If the music is in four time, a basic Scottish-ish reel step (forward, back, do-si-do, twirl) covers all. If it’s in three, then yeah, waltz. Turning your head sharply 180˚ on every first beat makes other people think that it was their fault.

‘If you’re not sure what beat it is, then it’s probably Latin. Hold your stomach with one hand, wave the other like a lassoing cowboy while barely moving the rest of your body at all and channel Ricky Martin.

‘Best of all, do what I do when required to go stalking. Whip out a sketchbook and say apologetically: “Forgive me. It’s all so lovely. I simply have to get this down.”’

How to cook game

When the head gamekeeper comes round at the end of a day’s shooting and asks if anyone wants to take home a brace of birds, the modern gentleman says yes. Every sportsman should be able to cook what they kill and our resident chef Simon Hopkinson has a few tips on how to turn a good game roast into a great one. 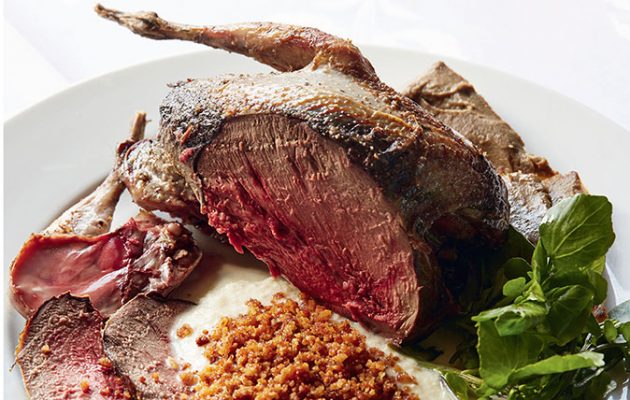 ‘Basting is the most important thing,’ he says.

‘Just add loads of butter and baste it well, be it partridge, pheasant or grouse. Don’t forget to rest it and be generous with the seasoning.

‘One thing I always do, especially with fatty birds, so as not to lose any of the good bits of the pan, is to let it stand on a slant so all the fat drips off into one corner. Then, spoon out the fat, leave the goo on the bottom and make the sauce and gravy in the pan.’

How to pick a decent wine

Every gent should know his way around a wine glass, yet as Country Life’s expert Harry Eyres reminds us, ‘wine is a great mystery, like music or art, and it’s a lifetime’s work to understand it’.

Thankfully, he’s given us a few tips to help you differentiate between the sludge and the sublime.

‘Where people go wrong is treating wine as though it’s beer or water and swilling it down – slow down and start by following your nose. The smell of the wine should tell you a lot straight away.

‘The colour is also important and can tell you if it’s off. It depends on the wine, of course, but a good, dark-red colour is never a bad sign.

‘Give it a good swirl and you look as if you know what you’re doing. Stick to swirling clockwise, give it a sniff and you should be able tell a fair bit about it.’

How to shoot a left and right

It’s been a long, wet and windy day in the field. Not much has come over the line and whatever has appeared has whistled past at such a speed as to make it virtually unhittable.

However, just as you’re getting ready to break your gun and enjoy a cup of tea, a pair of pheasant comes your way. The modern gentleman doesn’t miss.

‘What people tend to do is never pick the second bird. In a driven situation, you should always think about what to do if the first one falls. Don’t get excited that you’ve hit the first – stay cool.

‘A friend of mine and I were invited to shoot grey partridge in France. We shot several “doooobles” as they say over there and everyone was getting very excited. They said that they don’t see them often – they get ecstatic when the first one drops and stop.

‘Basically, be aware of that next bird and don’t rush the second barrel.’

How to spot a decent diamond

‘Recognising a decent diamond is not as complex as most jewellers would have you believe,’ declares Bobby Leigh-Pemberton, jewellery dealer at Humphrey Butler. This is good news because, at some point in the modern gentleman’s life, he will have to buy his lover a diamond.

That small blob of crushed carbon, its purity and rarity a metaphor for the great motions of the heart, has bewitched and beguiled since time immemorial. So, when standing over the jeweller’s counter, you should know a thing or two about the stone.

‘Aside from factors that are a matter of your own personal taste and budget, like weight and shape (or cut), all you really need to keep an eye out for is colour (the whiter the stone, the more prized it is) and clarity (many stones will contain marks and flaws within them),’ adds Mr Leigh-Pemberton.

‘Colour can best be judged by placing the stone against white card, in clear daylight, and breathing on it to cloud the surface and bring out any traces of yellow. The clarity is best examined with a jeweller’s loupe and be sure to turn the stone so as to examine it from all angles – cunning jewellers will often conceal flaws.’

How to prepare the perfect martini

‘Shaken, not stirred’ is not only the mantra of a certain British agent, but also describes how you’ll feel after a bad martini. Elliot Skehel, mixologist at Lab22 in Cardiff, is here to make sure that doesn’t happen.

‘Like most of the journeys we take in life, there are many routes towards mixing the perfect martini. Some will elect for the fastest route available, others prefer the more artisanal approach of smelling the botanical roses upon the path. I am a fan of the latter, so on that note, here is my recipe:

‘You will need London dry gin, dry vermouth, ice, citrus peel, a mixing glass and a bar spoon. Add ice to mixing glass. Stir the naked ice around the glass in order to cool it down and have it fit for the introduction of your alcohol.

‘Strain away the melted water. Pour 10ml of dry vermouth over the ice and stir until it’s as evenly coated as possible. Then, as before, discard the liquid from your glass.

‘Introduce 60ml of London dry gin to the prepared ice. Stir with a fluid and smooth motion for roughly 20 seconds.

‘The trick is to chill the liquid as much as possible without over-diluting the gin. Once the ideal point of dilution has been found, strain the drink into your chilled martini vessel and express the oils from a lemon over the top.

‘For a little twist, try introducing some olive brine to your gin while mixing, but either way, sit back, relax, enjoy.’

Crucial signs to look out for when identifying a complete and utter bounder.

Are you a gentleman? Credit: Alamy

Find out what makes a gentleman in this modern age, and take our quiz to find out whether you qualify...