The Manor House in Boughton Lees is a much-loved family home on the market for the first time in 50 years which seems to tick every box for a new family on the lookout for a new place to live.

There’s something irresistibly romantic about an English country house that bears the marks of having been in the same family for generations.

That’s not to say that there isn’t a place for immaculately-updated homes, and plenty of owners these days are doing a superb job of sympathetic restoration. But coming across a property which so clearly bears the stamp of its owners over the generations brings with it the sense of unearthing a gem, and that is the case with the Manor House in Boughton Lees.

This lovely, Grade-II listed home — for sale for the first time in half a century, priced at £1.3 million by Strutt & Parker — is in a village just outside Ashford, Kent. It’s a six-bedroom place with elegantly-proportioned rooms and a wonderfully old-fashioned air that only enhances its charm.

From the grandfather clock in the hallway through to the grand piano in the sitting room there are all manner of touches that give the place character. A new owner will of course want to put their own stamp on the place, and almost all in the way of carpets, curtains and furniture will no doubt be changed; but it remains a joy to see a house which has clearly been a much-loved family home.

No element of the house seems to have been better loved than the immaculate gardens; there are five acres of land in total here, but the highlight is the large lawn fringed with borders which create the joyous impression of a lovely English country garden.

There is also a swimming pool and a pool house, a tennis court and a field that looks like it would make a perfect paddock — and yes, there are stables and a barn should keeping animals be on your wishlist.

Given all that, the asking price of £1.3m seems like an awful lot of country house for the money, particularly given that Ashford is one of the best-connected towns in the South East of England, with motorway, high-speed rail and cross channel connections all a breeze.

Despite being 60 miles away London’s St Pancras station is just over half an hour on the train, while the fine city of Canterbury is a short drive east and the coast a similar distance to the south.

The Manor House in Boughton Lees, Kent, is for sale at £1.3 million via Strutt & Parker – see more details and images. 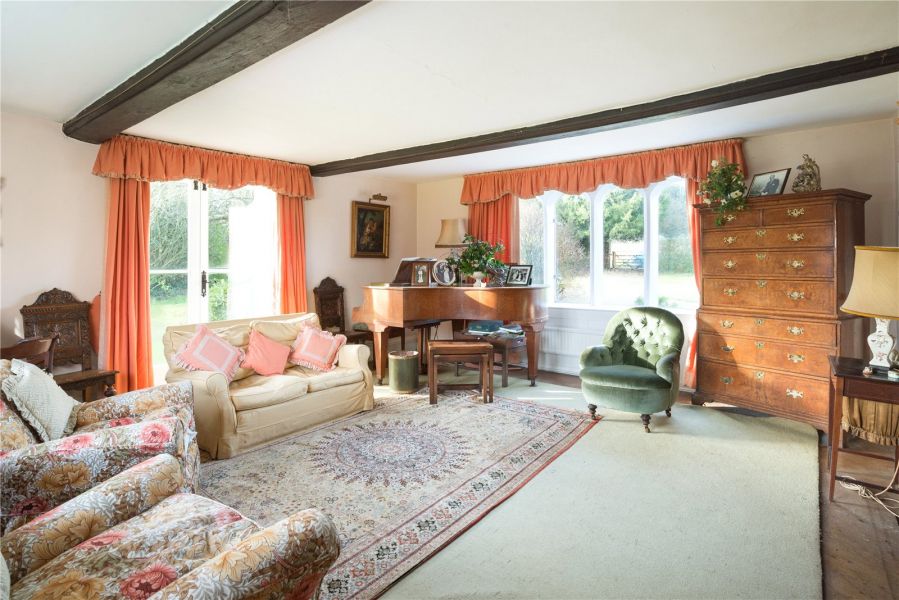