The Bowden Park estate is a truly vast property — with a correspondingly vast price tag — whose sale marks a great new chapter in its four-hundred-year history. Penny Churchill reports.

Few of England’s great country estates can boast a provenance as illustrious as that of the late Lord Weinstock’s Bowden Park near Lacock, Wiltshire, on the market with Savills at a guide price of £35 million for the 1,450-acre domain as a whole, or £25m for the Grade I-listed, Georgian main house with stabling and outbuildings set in 639 acres of gardens, parkland, woods and farmland.

The original house at Bowden Park was built for George Johnson, whose father, William, moved in the early 1600s to Wiltshire, where he took a lease on Bowden Park. George’s success as a lawyer and politician enabled the Johnsons to buy the freehold from the Earl of Westmoreland in 1662. Then the estate was valued at £800, although, according to the historian John Aubrey, Johnson trebled its value through skilful husbandry and land management.

In 1751, Bowden Park was sold to wealthy landowner Ezekiel Dickinson of Monks Park, Corsham, who had the house rebuilt for his son, Barnard, before it later passed to the Dickinson Harmer family. The Classical 18th-century stone house was designed and built in 1796 by James Wyatt, the most fashionable country-house architect of his day.

In 1849, the estate was acquired by Captain John Neilson Gladstone, elder brother of four-times Prime Minister, William Ewart Gladstone. To celebrate the birth of a son in 1856, John Gladstone had St Anne’s Church built at the top of Bowden Hill. Known as ‘the church in the clouds’, it looks out across the county of Wiltshire, a mile to the east of the National Trust village of Lacock. Gladstone also extended the main house in about 1850.

The 19th-century extensions were reduced and remodelled in about 1955 by the then owner, K. Peacock and, by 1967, when Lord Weinstock bought Bowden Park, the estate included only 535 acres of land.

Today, thanks to the judicious acquisition of surrounding land and buildings over time, Bowden Park boasts a substantial mixed rural estate, comprising 68 acres of rolling parkland, 303 acres of arable, 59 acres of pasture and 186 acres of woodland, all of which surround the Georgian house and its 22 acres of immaculate gardens and grounds. The topography of the land and the spread of woodland across the estate could also allow the re-establishment of an excellent pheasant and partridge shoot. 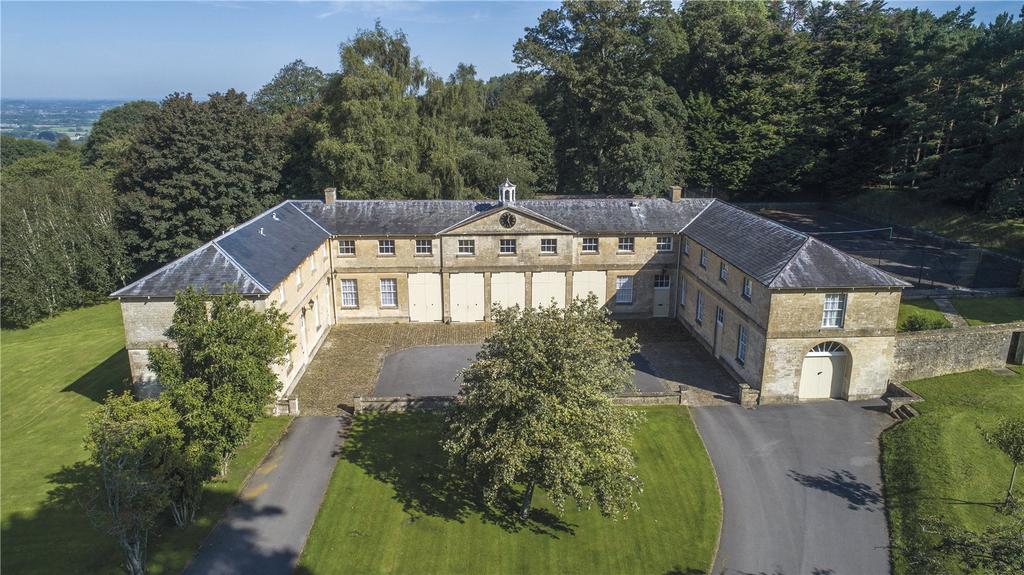 Built on two storeys of ashlar under a slate roof, the grand 15,900sq ft house is Classically symmetrical in style, with a central bow front, where the original front door was placed, and finely detailed wings to either side.

In the 1950s, shortly before the building was listed, a large entrance porch was replaced by a new L-plan service wing. Consequently, it may be possible to alter some areas — notably the entrance hall — so they mould better with the Wyatt original.

The distinctive, curved sage-green walls of the oval music room on the west front are flooded with light from three French windows that lead down to the terrace and the garden beyond.

On the north side of the music room, the elegant morning room enjoys wonderful views across the terrace to the surrounding parkland.

The library, smaller in size, but equally well proportioned, has original Wyatt bookcases and the south-facing dining room, linked by a mahogany door to the service wing, features Georgian panelling, sea-green patterned silk wallpaper and a fine marble fireplace. 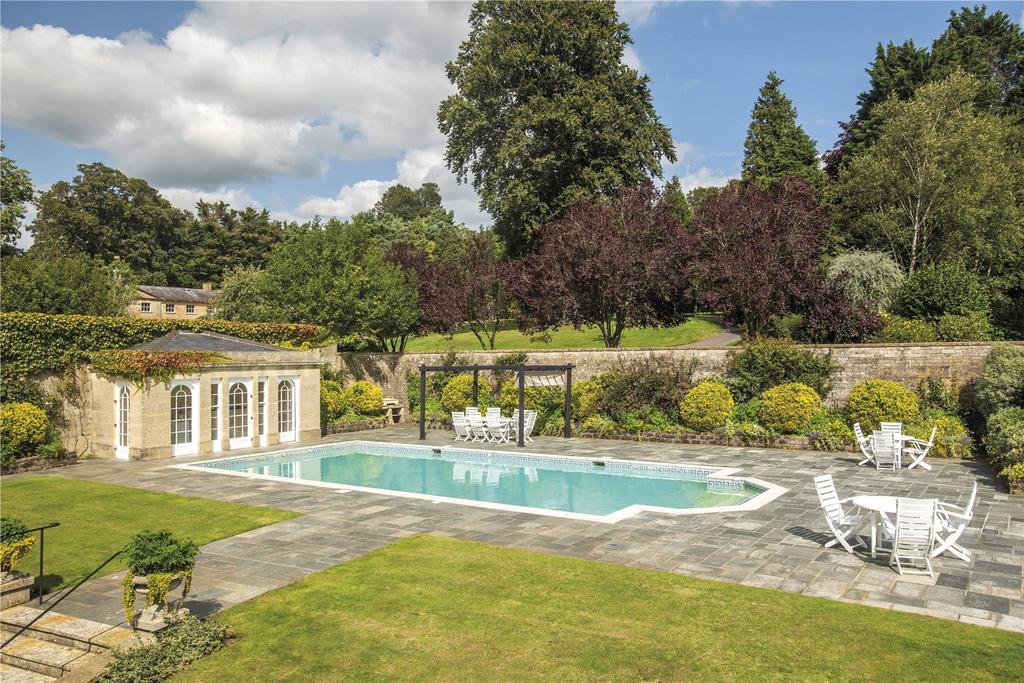 A grand, cantilevered stone staircase, lit naturally by two sash windows above the half-landing, leads to the first floor and five principal bedrooms, including the oval bedroom, which has wonderful views across the rolling parkland.

A rear staircase leads from the service wing to a nursery and staff quarters on the first floor, while a cellar below the main wing houses an oval wine cellar and five further cellar rooms. 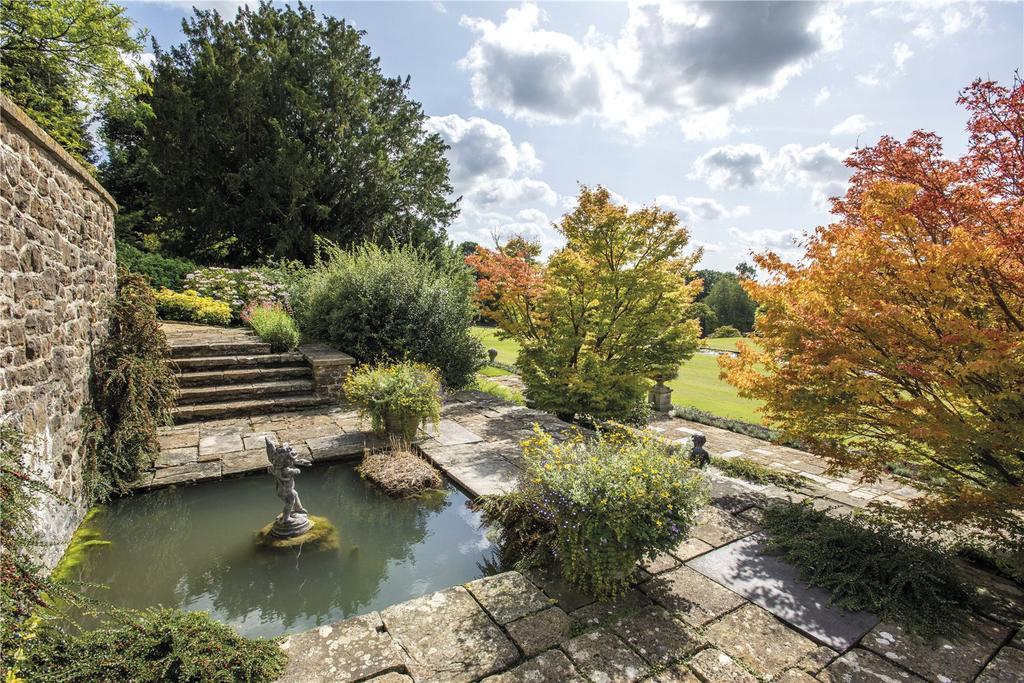 Further accommodation is available in the three-bedroom guest house and the impressive former stable block, both listed Grade II.

Lot 2, for sale at a guide price of £ 7.1m, comprises Ash Hill Farm and Great Lodge Farm — two fully-equipped arable and pasture farms, 704 acres in all. Lot 3, for sale at £1.6m, comprises the picturesque, 107-acre Nethermore Farm, a secluded smallholding with a three-bedroom farmhouse and a range of former farm buildings, now let until September 2023.

Also available is a portfolio of 12 houses and cottages scattered around the edge of the estate, seven of which are located on Bowden Hill.

Bowden Park is on the market with Savills at £35 million for the whole 1,450-acre property or £25m for the main houseand buildings with 639 acres — see more details and pictures..