Trending:
St James's Square is at the heart of London. Credit: Alamy

Carla Passino takes a look at St James's, the part of London that is truly 'regal by design'.

A flock of ducks quacks angrily at the foot of the Blue Bridge in St James’s Park, against the stately backdrop of Horse Guards Parade. Despite the noisy interlopers, a palpable change in atmosphere unfolds in the brief walk from Westminster to Pall Mall. Everything becomes more imposing, distinguished, almost rarefied in St James’s. This is a part of London that was regal by design — and it has remained so for the past 350 years.

‘It’s that feeling of history, of beauty that you see in the shops and the buildings that appeals to me most,’ says Andrew Love, chairman of The Ritz and the St James’s Conservation Trust, which works to preserve the area’s ethos and visual integrity. ‘St James’s is like a little village of its own and it’s a joy to be associated with it.’

Despite its historic feel, the area only made it onto the map in the 1530s, when Henry VIII had a Royal Palace built on the site of a former hospital devoted to St James The Less. It was at St James’s Palace that, sheltered behind the forbidding, turreted gateway, Elizabeth I spent many anxious evenings awaiting news of the Spanish Armada and there that several monarchs, from Charles II to Queen Anne, were born.

When, in 1661, Henry Jermyn, Earl of St Albans, was granted a lease to build ‘houses fitt for ye dwellings of Noble men’, of which London had, in his view, been ‘defective’, the opportunity to rub shoulders with royalty ensured that the new neighbourhood was a hit from the outset.

By modern standards, however, 17th-century St James’s fell rather short of its august reputation. In 1685, its crown jewel, St James’s Square, ‘was a receptacle for all the offal and cinders, and for all the dead cats and dogs of Westminster,’ according to Thomas Babington Macaulay’s History of England. This problem was partly solved with the installation of railings, which, says Mr Love, were taken away during the Second World War for their metal, although ‘recently, new [ones] have been completed in the original style’.

Nothing remains of the square’s 17th-century houses, many of which were rebuilt during the 18th century, when architects such as James ‘Athenian’ Stuart and Robert Adam outdid one another in a triumph of Corinthian and Ionic columns, pediments and arches that still grace the area today. Stuart also completed the interiors at another St James’s building, whose magnificence eventually outshone all others: Spencer House.

In 1812, the 2nd Earl Spencer fought a fierce bidding war against the Marquess of Blandford to secure a 1471 edition of Boccaccio’s Decameron that had belonged to another St James’s resident, John, Duke of Roxburghe. The Marquess won, but Lord Spencer was gracious in his defeat and went to have dinner with several bibliophiles at St Alban’s Tavern, where it’s said the group founded the Roxburghe Club.

Known as much for its lavish dinners as for its love of books, the Roxburghe was one of the many clubs that flourished — and flourish in St James’s. Some of them had clear political affiliations (the Carlton was Tory, the Reform Liberal), some intellectual ambitions (the Athenaeum, which counted Faraday, Dickens and Darwin among its members) and most were the setting for extravagant wagers — a 1776 entry in Brooks’s betting book shows a Mr Hanger betting 50 guineas that Mr Fox would get the gout before him.

The Athenaeum, founded in 1824. The distinctive clubhouse is located at 107 Pall Mall.

Gentlemen would often belong to more than one club: the Duke of Wellington, for example, was a founder of the Carlton and a member of at least another five, including the Athenaeum, which installed a pair of kerb stones to make it easier for him to mount his horse in old age — they still stand outside the club in Waterloo Place.

The Duke had long been the toast of St James’s and much of the wine in the many glasses raised to his health would have come from Berry Bros & Rudd. In the 322 years since its inception, the shop, which started life as a grocery store, has served poets (Lord Byron), Prime Ministers (William Pitt The Younger), royalty (from George III to The Queen) — and even some shady characters.

‘My grandfather, Francis, used to tell us a story from the 1920s: one time, the door opened and in walked someone that looked like Al Capone,’ recalls Berry Bros & Rudd’s creative director and eighth-generation family member Geordie Willis.

‘It was Legs Diamond, one of the gangsters of Prohibition America. He put in a substantial order — it was collected by a fleet of taxis the next day.’

From their corner of St James’s Street, the Berrys and the Rudds have seen Britain’s vinous taste evolve over time — ‘go back 100 years and the most expensive wines on our list would have been German’ — and, with it, their business. But as the shop has embraced ‘measured change’, so has the entire St James’s area: ‘It’s about moving forward with an eye on the past, rather than being stuck in the past,’ says Mr Willis. ‘It’s not a place that’s resting on its laurels.’

Among the changes of the past few years is the area’s return to its origins as one of London’s most desirable places to live: ‘St James’s has become better known as an exclusive residential address — perhaps a more discreet and refined version of Mayfair or Knightsbridge,’ says Josh Ayres of Strutt & Parker.

According to Diana Tran of Sotheby’s International Realty, this renewed appeal owes much not only to the area’s obvious beauty, but also to the fact that ‘it offers an experience of the past, present and future, all at once’.

That, notes Mr Willis, is really the essence of St James’s: ‘It feels timeless in many ways, but, equally, it feels progressive. It’s a bit like the analogy of the swan that’s graceful on the surface, but churning under the water. St James’s is a little like that: there’s an awful lot going on beneath the surface. It’s not a Disney version of bygone London.’

Property for sale in St James’s 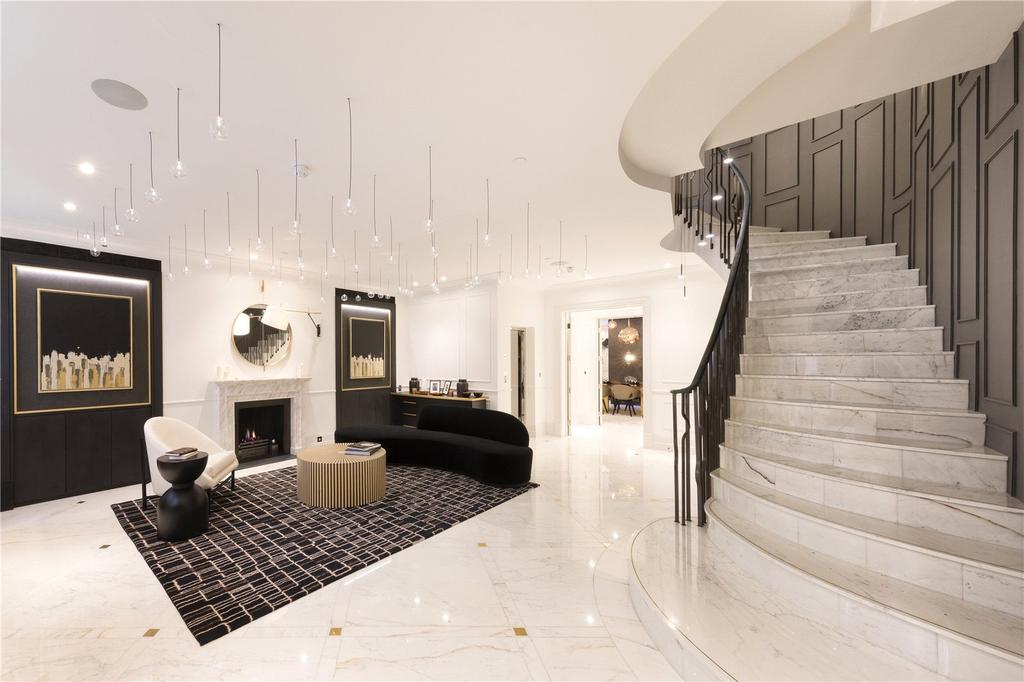 Tucked in a cul-de-sac off St James’s Street, this townhouse spans 8,356sq ft fronted by an understated black-brick façade. The interiors, set across several floors linked by a sweeping staircase, include every conceivable room, from spa, gym and cutting-edge cinema room to a clubroom, a magnificent dining room and a master suite — one of five bedrooms — that takes up the entire second floor. There’s even a sky lounge with retractable roof.

For sale via Savills at £25m — see more pictures and details.

A one-bedroom penthouse right next to St James’s Park, in an 18th century building that has been transformed inside. It’s not often we write the words ‘one bedroom, three bathrooms’ in property details, but there you go.

For sale via Knight Frank — see more pictures and details. 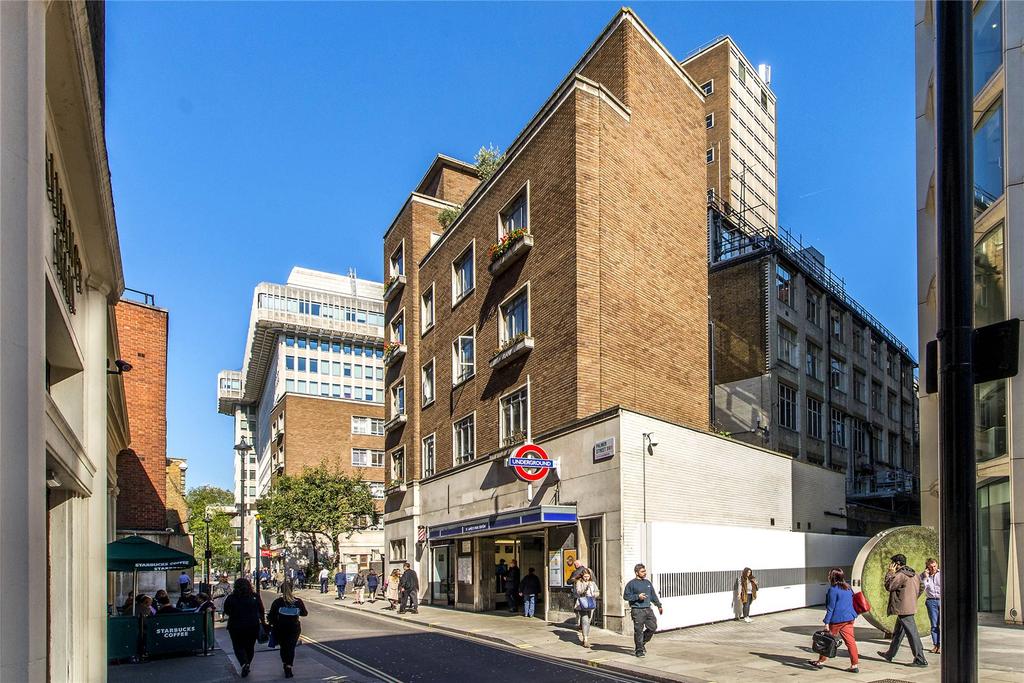 To paraphrase the old saying, you don’t need to be a millionaire to live in St James’s (but it helps). For those on more modest budgets this two-bedroom flat is literally above St James’s Park tube station, and while it lacks niceties such as a sitting room or dining room (there is a sole kitchen-diner-reception area) it has direct access onto the  communal terrace.

For sale through Chestertons — see more pictures and details.

The places you need to know in SW1

This is where Ritz chairman Andrew Love buys perfume gifts.

Thought to have inspired the martinis in Ian Fleming’s ‘James Bond’ books.

Unquestionably one of the best cheesemongers in Britain.

Worth a visit as much for its striking interiors as for its skincare products.

London’s oldest bookshop holds three Royal Warrants: The Duke of Edinburgh, The Prince of Wales and The Queen.