Built during the War of the Roses, Ockwells Manor is a perfect timber-framed mansion with a rich history, set in the heart of Berkshire. Knight Frank and Savills want ‘offers over £10 million’

Historic, 15th century Ockwells Manor, near Maidenhead, Berkshire, is a medieval masterpiece once described by Sir Nikolaus Pevsner as ‘the most refined and most sophisticated timber framed mansion in England’.

It has now come to the market via Knight Frank and Savills, a quite outstanding home which boasts 11,390sq ft of internal living space on two floors, including eight reception rooms and eight bedrooms. 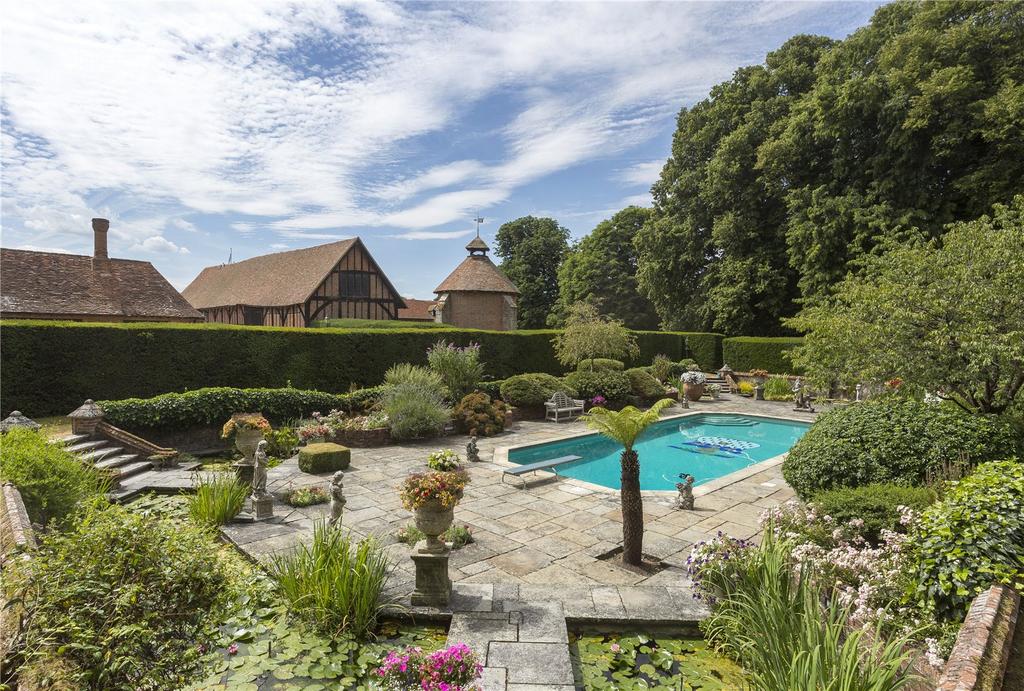 The agents are soliciting offers over £10 million for the immaculate Grade I-listed house, which is set in 42 acres of gardens, paddocks and woodland on the edge of Windsor Forest. It’s just outside Maidenhead, close to Bray with its world-famous restaurants, while being just six miles from Windsor and nine from Henley-on-Thames. 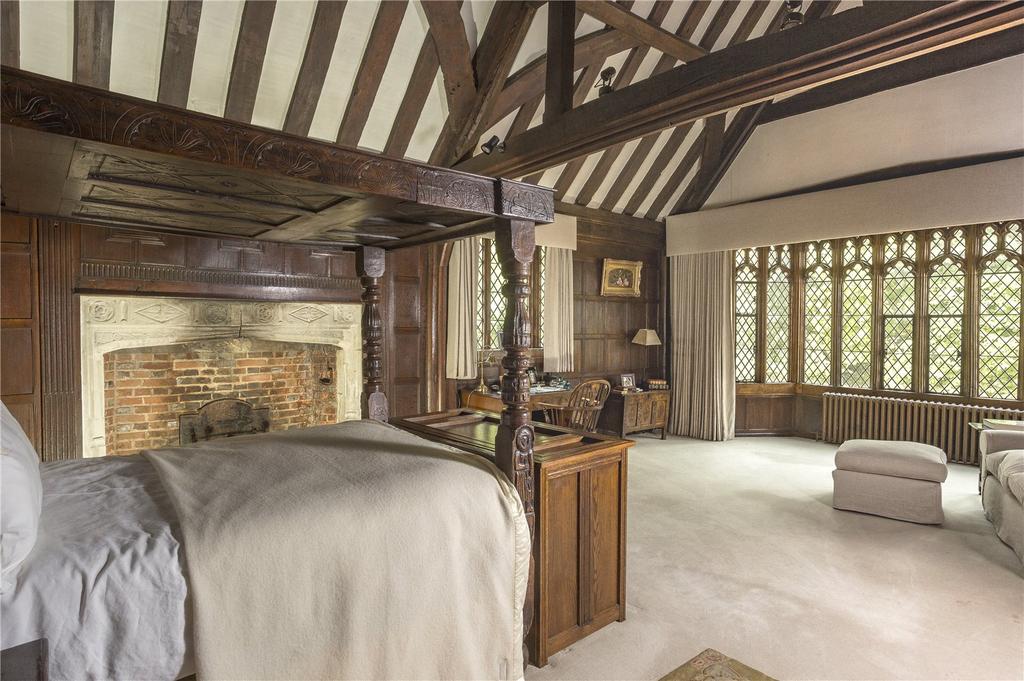 Writing of Ockwells in Country Life back in January 1924, Christopher Hussey described it as ‘the earliest and most complete example of the type of a medium-sized manor house evolved by the Middle Ages in England’.

The manor of Ockwells, or Ockholt as it was originally known, was granted in 1267 to one Richard de Norreys, who held the sinecure office of ‘chief cook’ to Henry III’s queen, Eleanor of Provence. 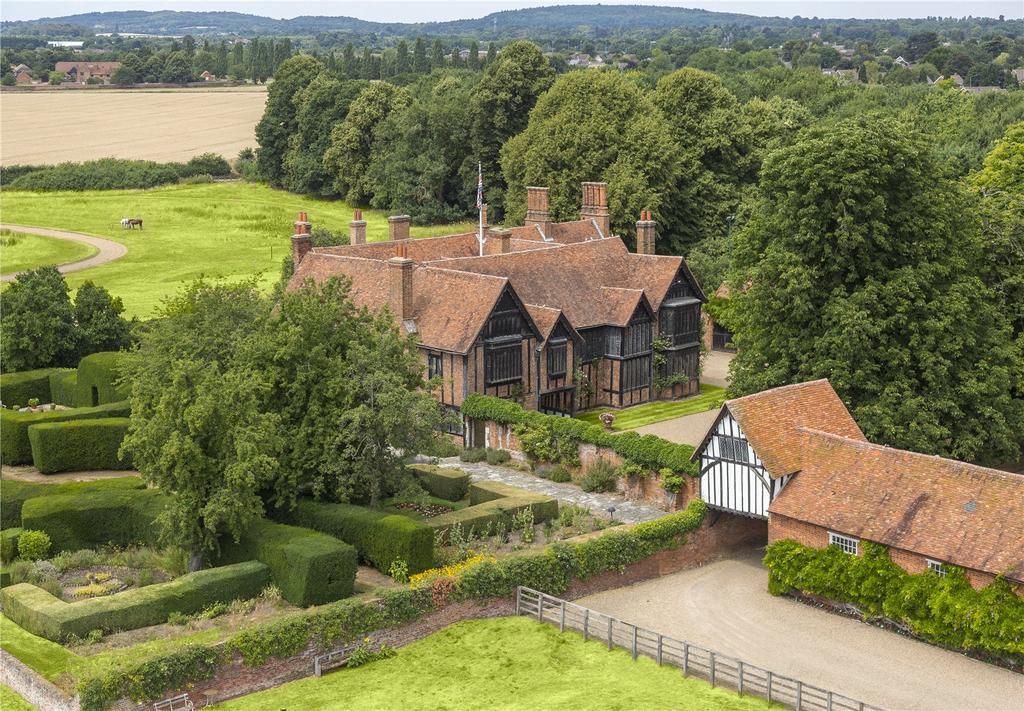 Nothing quite that old survives today, but plenty of elements of its subsequent medieval grandeur are still to be seen. One of the outstanding features of Ockwells Manor is the Great Hall, with its Gothic roof and rare 15th-century screen, which occupies the centre of the principal range of buildings, between an outer and an inner court. 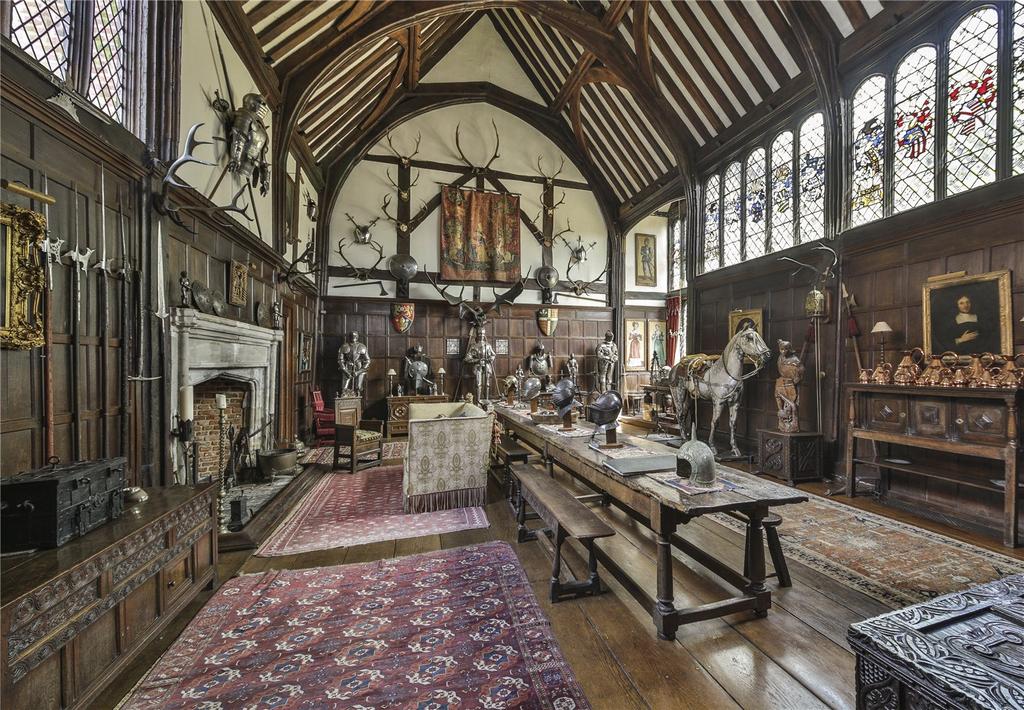 Of particular note are the 17 magnificent heraldic glass panels that fill the windows on one side of the hall and represent the arms of Sir John Norreys and his friends, many of whom were killed in the Wars of the Roses.

Although Ockwells Manor contains much that tempts the visitor to stand and stare, there is also much to appeal to a family with a taste for active living – on the tennis court, in the swimming pool and on the manicured polo field, which comes with all the stabling and equestrian facilities that any high-goal player would be proud of.

In a nod to the 21st century, away from the main house, a modern, purpose-built building serves as a helicopter or aircraft hangar. 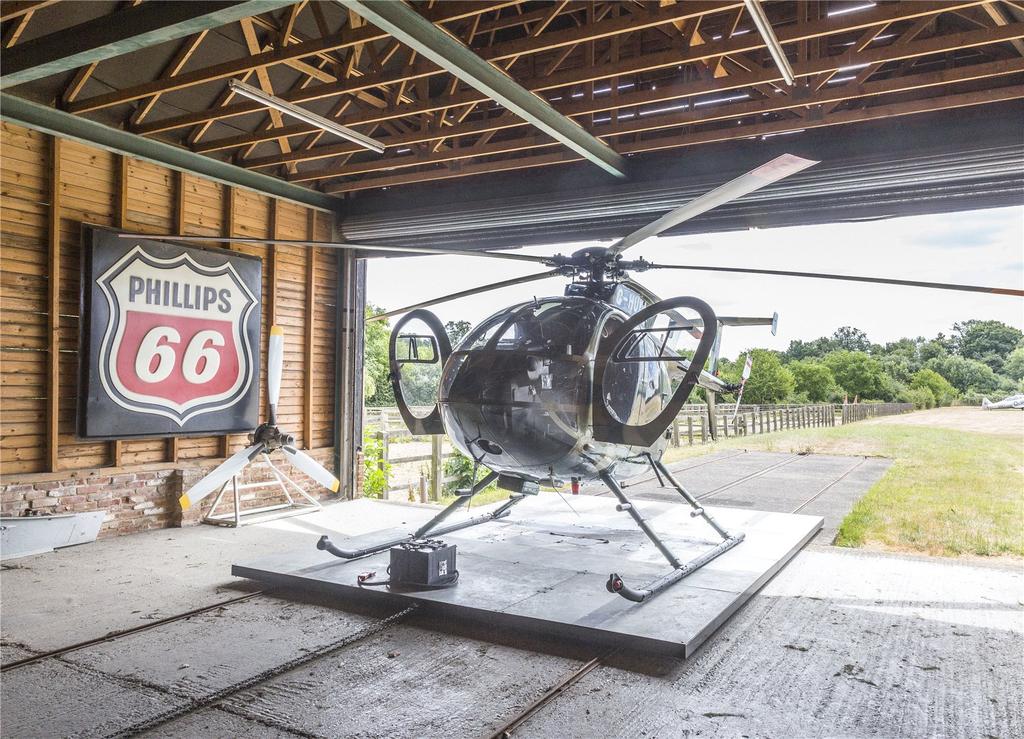 Nothing is known of the manor house that originally existed on the site in the 13th century, although it was probably moated for protection and also constructed of wood. 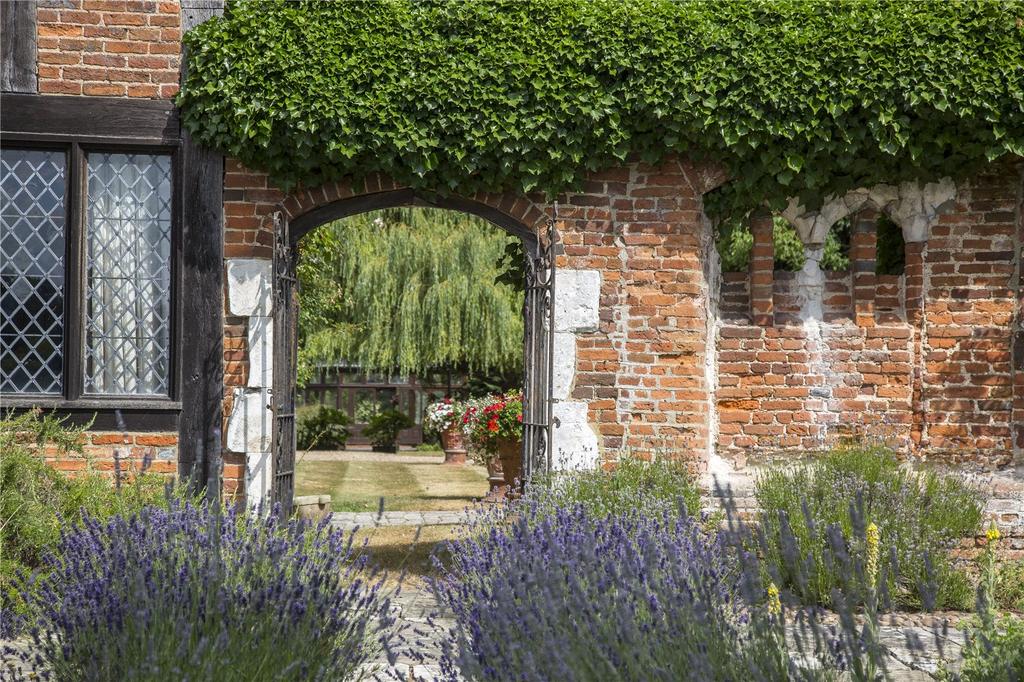 John Norreys, de Norreys’ descendant, built the present manor during the Wars of the Roses, between 1446 and 1456, although building work wasn’t completed until 1466. Sir John was an astute political operator, who, despite being a proud Lancastrian, managed to retain royal favour by later switching his allegiance to the victorious Yorkists. 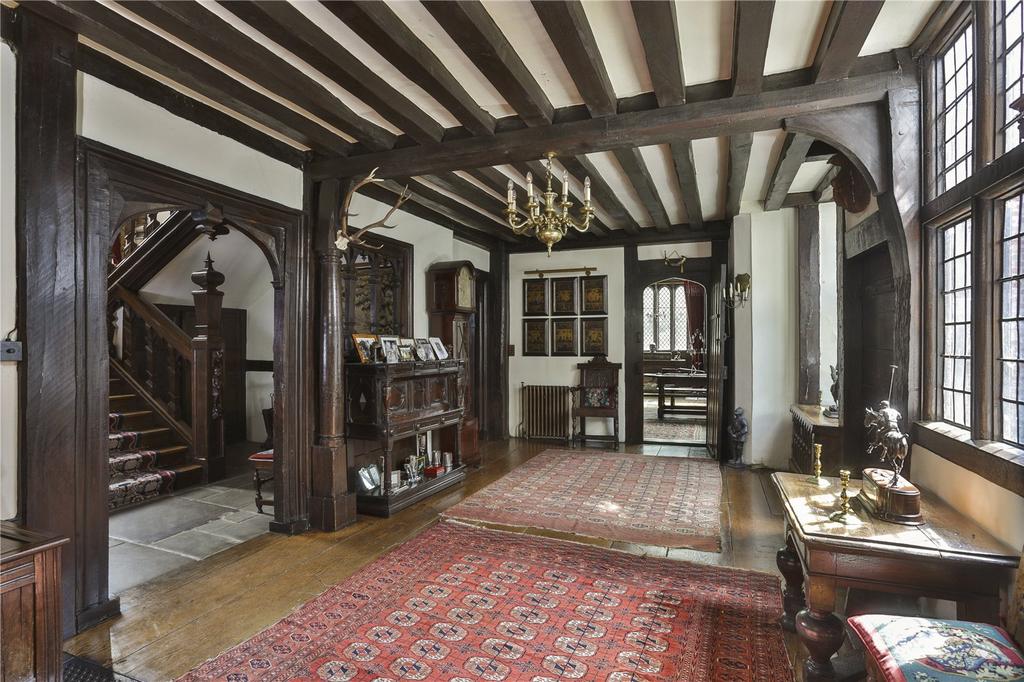 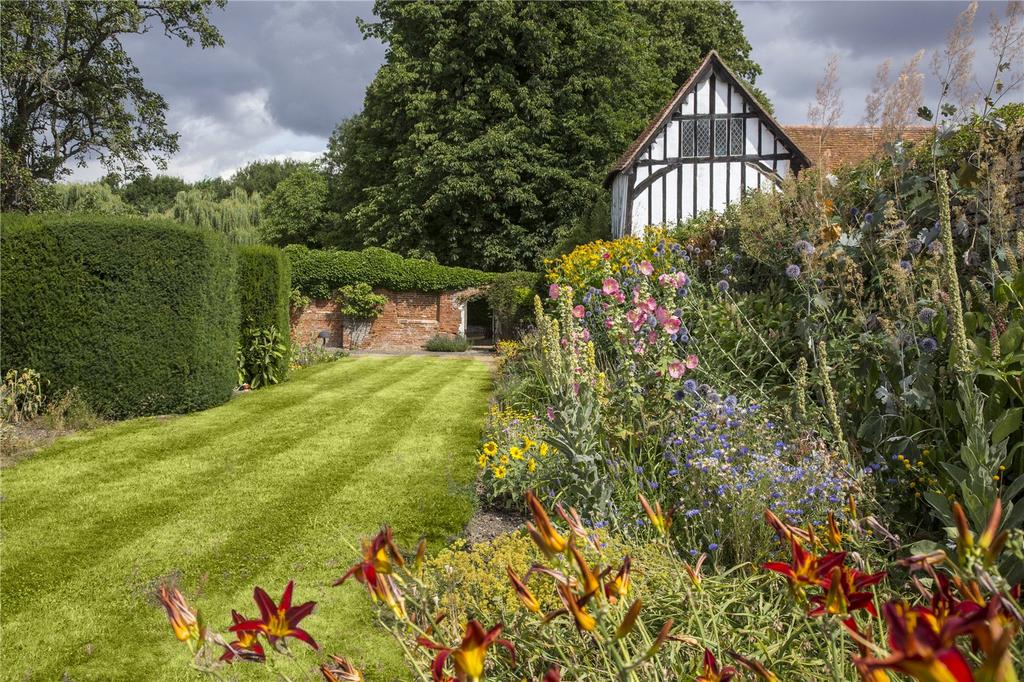 Following Sir John’s death in 1466, Ockwells passed – via his son, Sir William, and his grandson, Sir Edward – to his great-grandson, Sir Henry Norreys, who was a Groom of the Stool to Henry VIII and a close confidant of the King. However, Henry was later accused of treason and adultery with Anne Boleyn, found guilty and executed in 1536.

Thereafter, Ockwells passed to Sir Edward’s sister, Elizabeth, who brought the manor as her dowry on her marriage to Sir Thomas Fettiplace. The Fettiplaces’ only child, Katharine, married the Catholic Sir Francis Englefield, who represented Berkshire in Parliament and almost certainly lived at Ockwells. 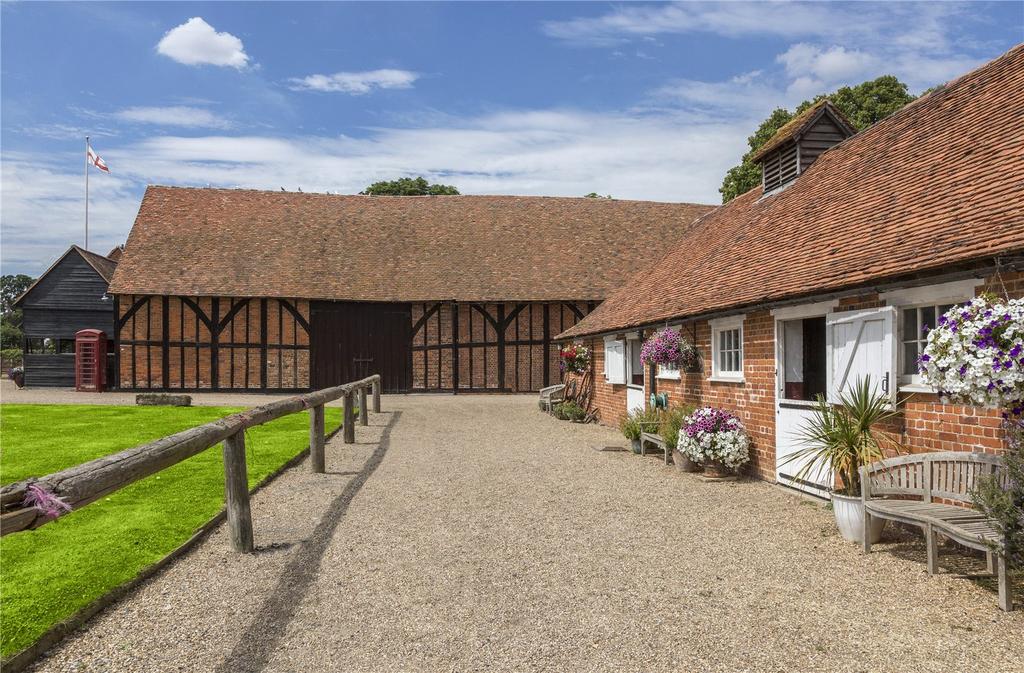 However, when Elizabeth I acceded to the throne in 1558, Englefield went to Spain by Royal Licence and, contrary to that licence, stayed there for the rest of his life.

As a result, his estates, including Ockwells, were confiscated by the Crown, although his wife was allowed to remain as a tenant during her lifetime. 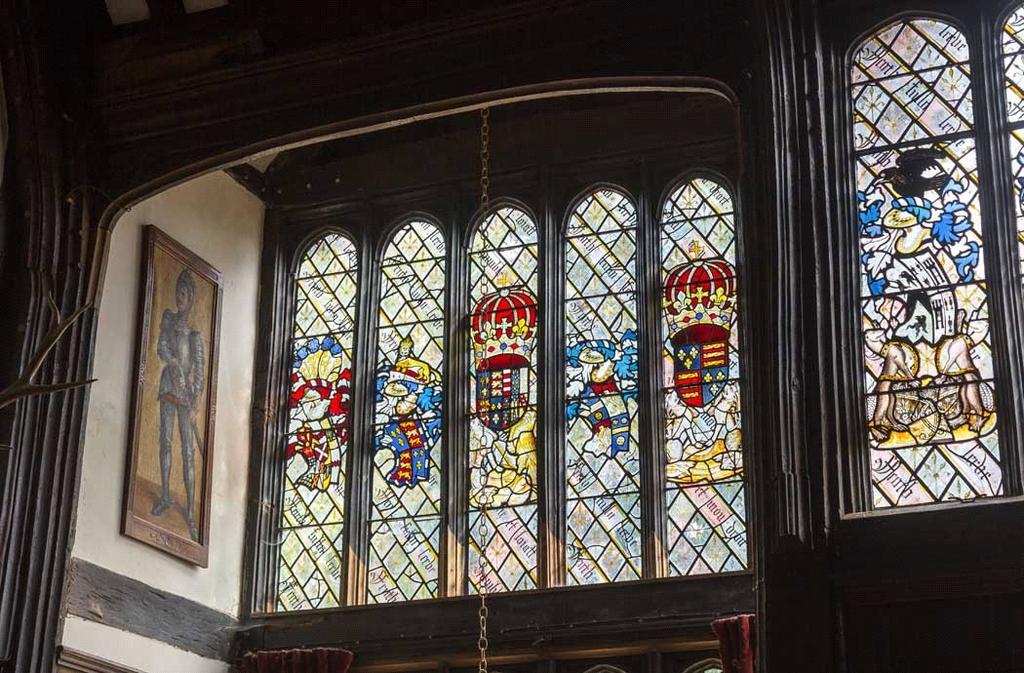 On Katharine’s death, the manor passed to her cousin, Sir John Fettiplace, who surrendered the manor to the Crown for £200 and died the same year. One year later, his son, Besils, leased the estate for 1,000 years at a peppercorn rent to the trustees of William Day, Provost of Eton.

In 1625, Day’s son, also William, sold the manor to Thomas Baldwin, although the Days continued to live in the house as tenants for more than a century. From 1786, Ockwells was owned by the Powneys, a yeoman family from the nearby village of Bray, who sold off the bulk of the estate in 1801. 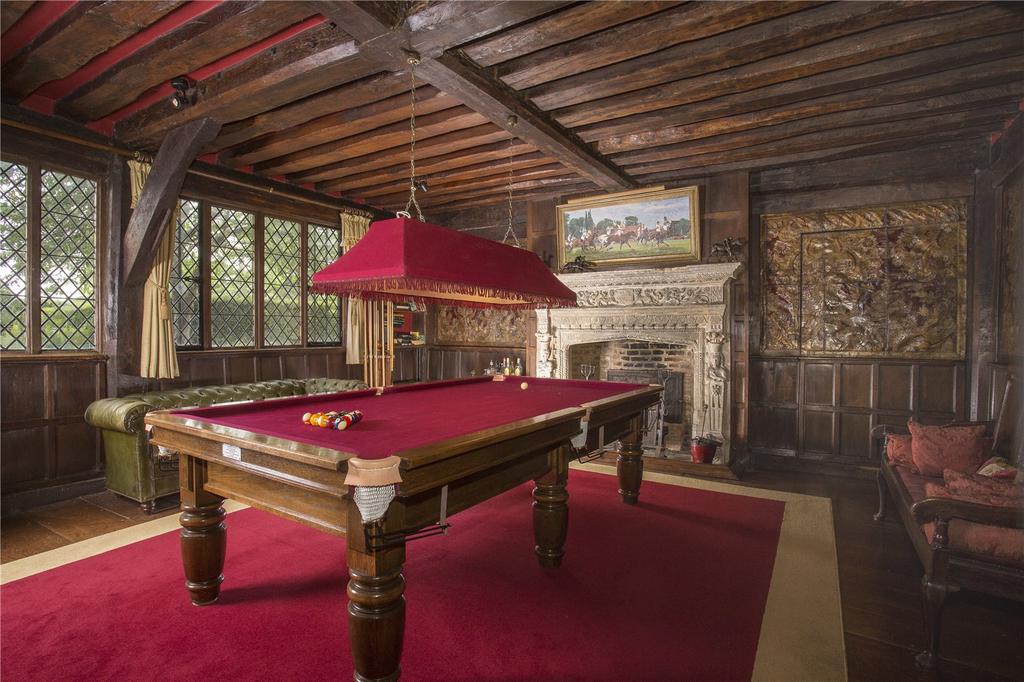 The house and part of the lands were then bought by Charles Pascoe Grenfell, in whose family it remained until the manor house, by then ‘delapidated and in the condition of a farmhouse’, was bought in the late 1800s by Sir Stephen Leech. According to Hussey, Leech carried out ‘a great deal of excellent structural restoration, notably on the façade’, stripping and repairing the entire timber frame.

The manor was then purchased by one Sir Edward Barry, another enthusiastic antiquarian, who recast the building in its present form in stages, enlarging the dining room, inserting fireplaces and windows and moving the Jacobean staircase to its present position.

Sir Edward devoted several years to furnishing the house with many fine objects, notably tapestries and armour and, when the 575-acre estate was put up for sale in November 1949, following Sir Edward’s death the previous year at the age of 91, his executors insisted that any prospective purchaser of Ockwells should have ‘every opportunity to acquire its contents’. 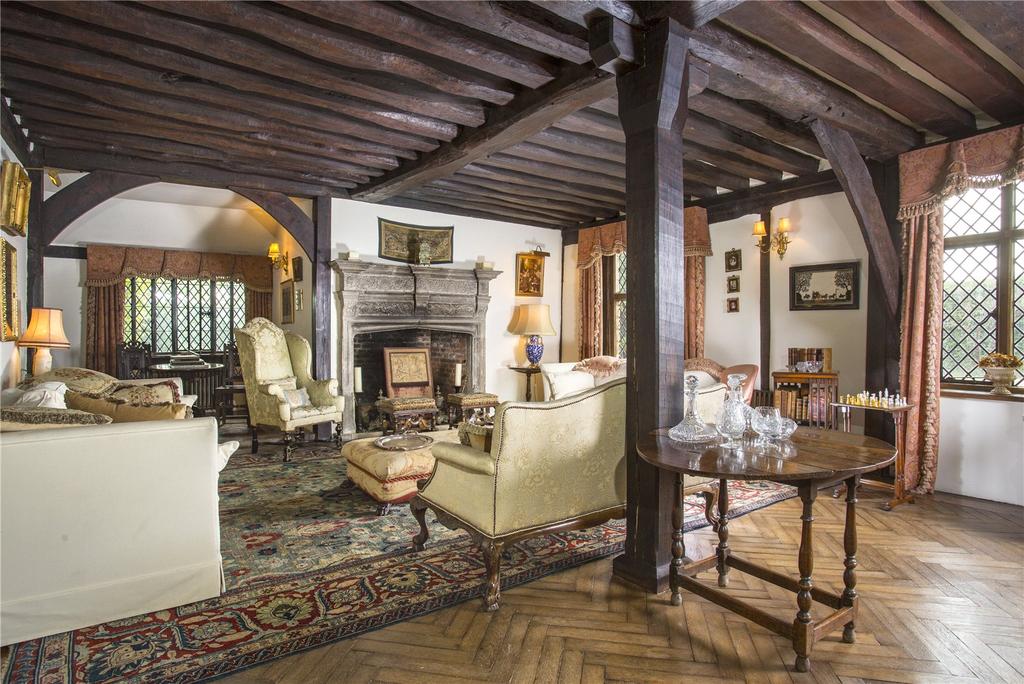 During their tenure, the present owners enlisted the expertise of Hertfordshire-based Mansfield Thomas and Partners to restore this remarkable house to its present impressive state of preservation, as well as enhancing its undoubted appeal as a beautiful family home.

Ockwells is for sale via Knight Frank and Savills for ‘offers over £10 million’ – see more pictures and details.