Shoreditch's incredible transformation over the last two or three decades has turned a little-loved part of London into a world-famous centre of modern culture. Carla Passino finds out more.

A ghost haunts the streets of Shoreditch. It’s Jane Shore, beloved mistress of Edward IV and one of the brightest stars of his Court — until Richard III ascended to power and threw her into Ludgate prison. Old, destitute and wretched, she went on to roam the East London parish, where she died tragically in a ditch, bequeathing the place its name: Shoreditch.

There is no substance to this tale — after her stint in jail, Mistress Shore married and led a comfortable life — and, far more prosaically, Shoreditch appears to owe its name to an unidentified ditch by a riverbank. But the heart-wrenching story is a much better fit for the artistic nature of an area that, over the centuries, has nurtured Shakespeare, Charlie Chaplin and dozens of more contemporary artists. 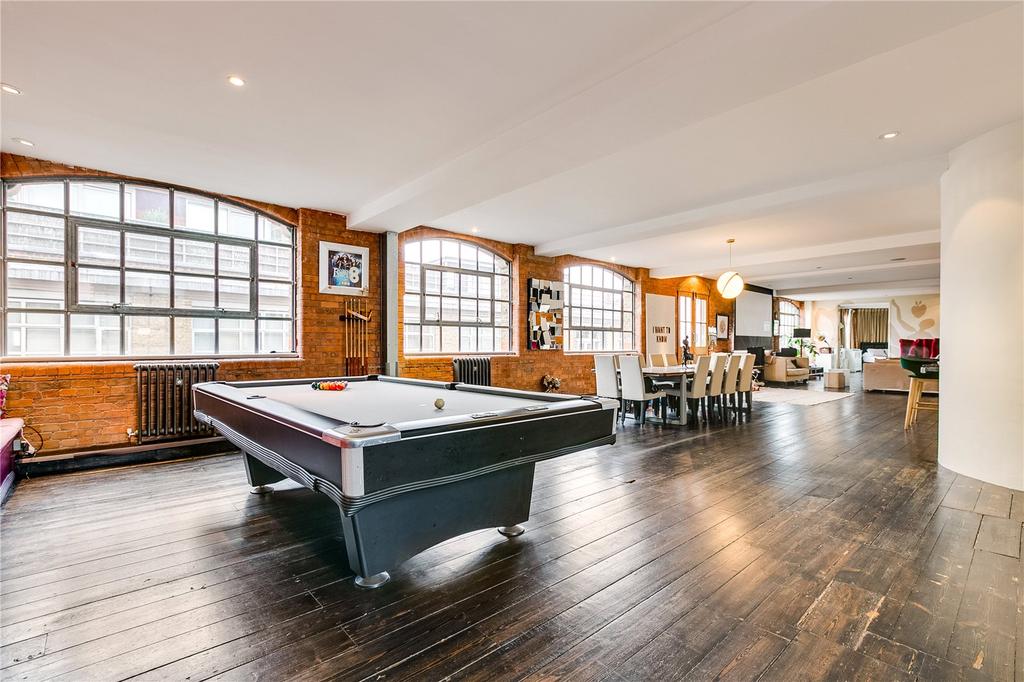 This loft on Nile St is the sort of property which once brought struggling artists to the area — now, it attracts well-heeled millionaires happy to pay £5.5 million for a two-bedroom flat. This example is for sale with Barnes.

Henry VIII unwittingly paved the way for Shoreditch to become London’s thespian quarter when he dissolved a large Augustinian priory by Shoreditch High Street, in 1539. Nearly 40 years later, some of the former nunnery’s vacant land caught the eye of a cunning impresario, who thought it would be perfect to hold performances. The man was James Burbage and his theatre — as would the nearby Curtain, which opened a year later — would go on to stage some of Shakespeare’s early works.

Londoners flocked to watch shows such as Titus Andronicus and Romeo and Juliet, and the streets of Tudor Shoreditch — buzzing with people, playhouses and pubs — must have borne more than a passing resemblance to the sequence of packed restaurants, cocktail bars and culture spaces that now stretch east and south of the glass-and-steel behemoths of Old Street’s Silicon Roundabout.

Even after the parish lost its theatrical crown to Bankside and, later, the West End, local venues kept going strong — Charlie Chaplin trod the boards at The London Music Hall — and, today, the Rich Mix Arts Centre and the Shoreditch Town Hall continue to fly the performing-arts flag, with programmes that encompass plays, dance, music, cinema, talks, comedy and community events.

Despite its theatres and magnificent hall, however, this was an overcrowded, ‘ill-used parish’ in Victorian times, according to Walter Thornbury’s 1878 Old and New London, and remained poor for most of the 20th century, until, in the late 1980s, the lure of cheap accommodation on the City’s fringes started to draw a fresh wave of artists, designers and musicians. 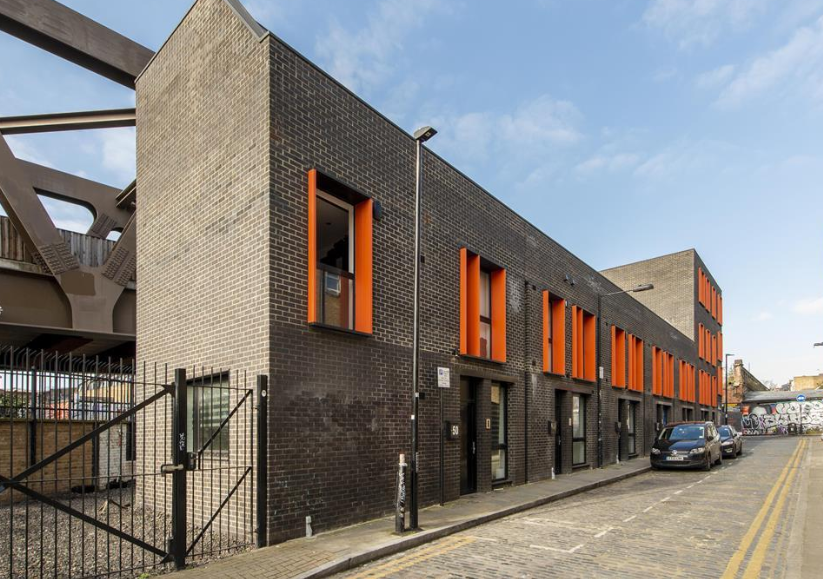 Not every property in Shoreditch needs you to be a millionaire. This four-bedroom house a stone’s throw from the station sneaks in at £950,000, with Hudson & Connor. (We’re not lying about the stone’s throw thing — the girders you see on the left are the tracks leading in to Shoreditch High Street station.)

Shoreditch became the stomping ground for people such as Tracey Emin, Joshua Compston, Sarah Lucas and Gary Hume, art dealer Jay Jopling and the late Alexander McQueen, who sparked a cultural renaissance. According to Marta Nowicka, founder of short-lets company DOMStay&Live, ‘creatives made Shoreditch fashionable by living here… [they] don’t like rules, the norm, boundaries and the Establishment, so Shoreditch was full of subversion’.

The same spirit of rebellion pushed graffiti writers to leave their mark on local walls. Soon, some of them began to experiment with different ideas — and street art was born. Two artists, in particular, helped establish the area as a vast, ever-changing, open-air gallery: Banksy and D*Face. ‘They made this art popular and safe,’ says Dave Stuart, who runs Shoreditch Street Art Tours. ‘People were amused by it — the humour, the politics — and found it was not intimidating in the way they imagined graffiti to be.’ 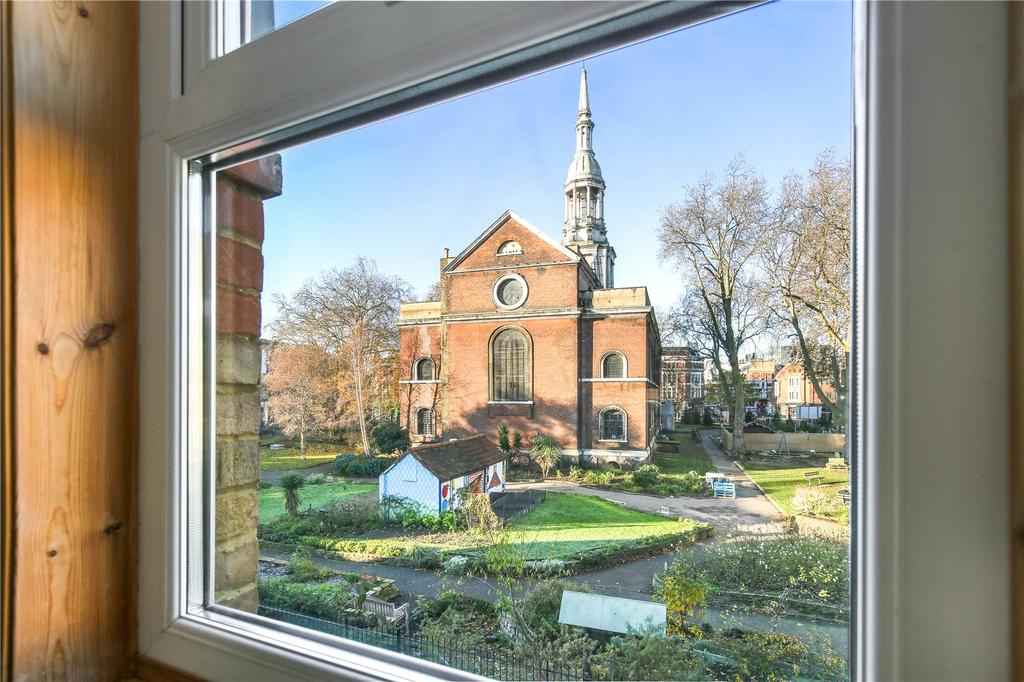 It’s difficult to find a Shoreditch home with a green view, but not impossible: this £1m, three-bedroom house overlooks the gardens around St Leonard’s churchyard. It’s for sale through Keatons.

As a collectors’ market developed for this kind of work, local buildings — from wide-windowed Huguenot silk-weaver houses to Victorian brick terraces, sturdy Art Deco warehouses and functional post-war properties — became one giant canvas. ‘Artists from all over the world flocked to Shoreditch,’ says Mr Stuart, and, despite growing competition from places such as Berlin and New York, they continue to do so now. ‘We still have this constant flow of new artists, and it’s very energetic, very contemporary. It remains incredibly exciting.’

With small clandestine pieces standing alongside larger works done with permission, every corner reserves a surprise, whether it’s a spoof blue plaque, a giant crane or the collage of a wily fox. New Inn Yard has a building-wide mural where different artists reflect on the meaning of connectivity. Whitby Street has Jimmy C’s haunting Portrait of a Woman, its paint dabs a modern take on Pointillism. And a stroll down Rivington Street takes in Ben Eine’s typographic Scary mural, now updated with blue moustaches, Thierry Noir’s brightly coloured, cartoon-like profiles, and two pieces by Banksy, both featuring dogs. 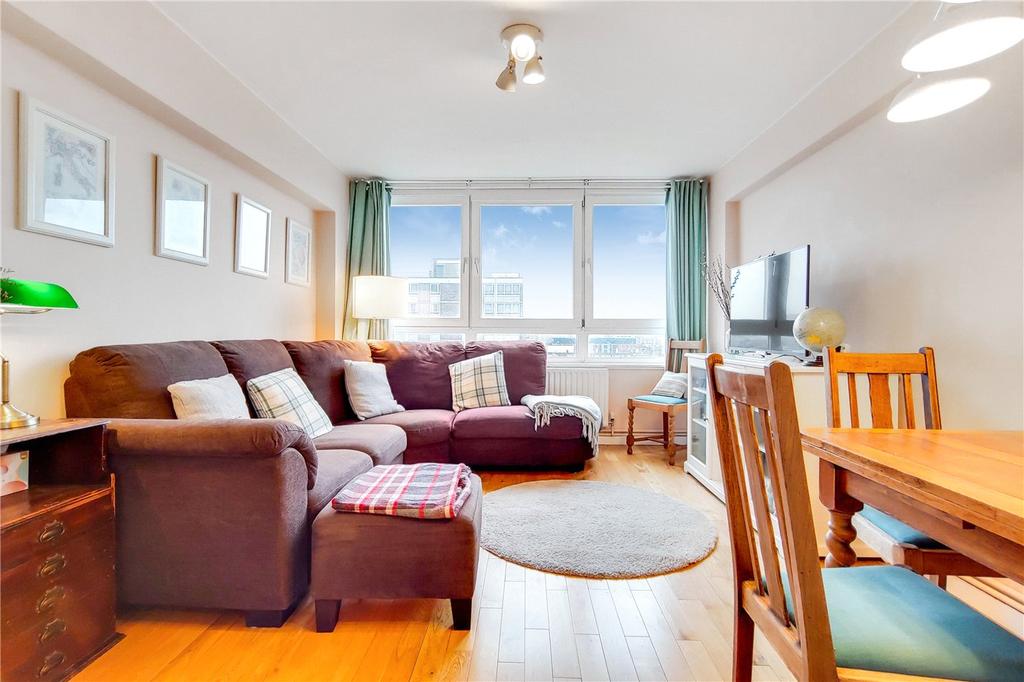 Proving that there is still some scope for people on regular salaries to buy homes in Hoxton, this two-bedroom flat in a high rise near the East London Line station is £450,00 through Winkworth.

Although it is easy to focus on large-scale work by big-name artists, Mr Stuart recommends delving beyond the surface. ‘There’s a couple painting on Victorian pennies and a guy that goes down to the Thames when the tide is out, collects bits of pottery and turns those into art with a little bit of wood he finds. That’s as inspired and radically different as anything we have seen up there. But you have to really be looking to discover it.’

Perhaps, if you keep your eyes sharp enough, between one of Mr Cenz’s mesmerising female faces and a poster supporting the Hong Kong protests, you may even spot the ghost of Mistress Shore.

A huge lamp resembling the Moon sets the tone at Gentlewench, which specialises in unconventional fashion and homeware.
16, Chance St, E2 — www.gentlewench.com

Take an art course, enjoy a talk and discover new talent at this London insti-

What else you need to know

One thing is lacking: green space. Few properties come with a garden, although Shoreditch Park and the nearby St Mary’s Secret Garden are good hideaways.

Gone are the days when postcode snobbery hindered the London housing market, finds Eleanor Doughty. Or are they?

A rare opportunity for London buyers can be found in the startling reinvention of John Nash’s Regent’s Crescent, finds Holly