Jason Roberts of Strutt & Parker’s Morpeth office quotes a guide price of £3.95m for magnificent, Grade I-listed Milbourne Hall, ‘a hidden gem’ set in 24 acres of wooded gardens and grounds near the peaceful small hamlet of Milbourne, four miles from Ponteland, 12 miles from Morpeth and just under 12 miles from Newcastle-upon-Tyne.

Built between 1807 and 1810 of the local Belsay stone under a Lakeland slate roof, Milbourne Hall is a striking country house with an attached stable court and west gate tower linked to the rectangular main block.

It was designed by the Scottish architect John Paterson, who trained with Robert Adam, for Ralph Bates, a member of a long-established Northumbrian landowning family, who was High Sheriff of the county in 1812 and later Deputy Lieutenant. In 1891, Georgiana Elliott (neé Bates) left the estate to her grandson, Ralph Mortimer, who was High Sheriff in 1916 and died at Milbourne Hall in May, 1955.

Built in a style reminiscent of Adam, the symmetrical layout of oval rooms, oval staircase hall and octagonal library is of notable interest and was described by Pevsner as ‘ingeniously worked out so that nearly every room inside is oval’.

Unusually, the house is arranged around an octagonal courtyard and, in addition to its own guest apartment (presently in mid refurbishment), has secondary accommodation in the shape of three self-contained carriage houses in the north, south and west wings, which provide perfect boltholes for visiting guests or offer the option to generate a substantial income stream.

The present owners, who bought Milbourne Hall in need of refurbishment in 2007, have done most of the heavy lifting in terms of structural repairs, including of electrical and heating systems. A long, sweeping, tree-lined drive leads to a large parking area and a stone portico that sets the scene from the moment you cross the threshold.

Three opulent reception rooms radiate from the central rotunda, which also opens onto the kitchen with its central island and breakfast bar. Bedrooms in the main house include a master suite, three further bedrooms and the four-bedroom guest apartment.

Outside, the gardens and grounds are a mix of formal lawns, areas of mature trees and deep borders, a secluded walled garden with traditional planting and sections left to natural growth, and a freshwater flight pond that attracts wildfowl at dusk. 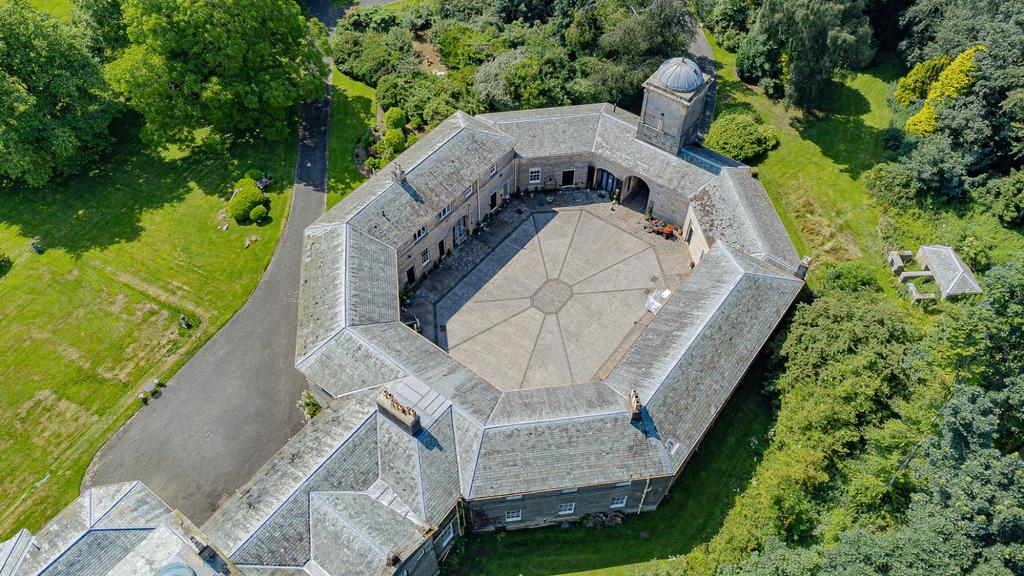 The octagonal courtyard with its decorative paving and original cobblestones, is accessed through a tall water-tower entrance that leads to the stables, garaging, stores and apartments.

Milbourne Hall is for sale via Strutt & Parker at £3.95m — see more details and pictures.