Trending:
Loud Mythom includes a house and estate that takes in 'some of the finest and most picturesque fishing on the River Hodder'. Credit: MSW Hewetsons

There are parts of the country where £1.1m buys little more than a nice semi-detached house; for those who don't mind a challenge, the Loud Mythom estate in Lancashire offers far more. Penny Chiurchill explains.

In the late 17th century, Sir Nicholas Shireburn of Stonyhurst was ruthlessly expanding his vast estates in Lancashire, Yorkshire and elsewhere. These included Leagram in the Forest of Bowland, a royal hunting park until Elizabethan times, when the Queen gifted it to her favourite, Dudley, who swiftly sold it to the Shireburns.

Sir Nicholas also acquired the ancient steading of Loud Mythom at Thornley, near Chipping, Lancashire, which stands alongside the River Loud at its junction with the Hodder, and, for more than 300 years, was part of the Leagram estate that passed by inheritance from the Shireburns and the Welds of Lulworth Castle, Dorset, to its present owner, John Weld-Blundell of Leagram Hall.

In the 1980s, Loud Mythom, then a tenant farm, was gifted to Mr Weld-Blundell’s brother George, who, with his wife, Buddug, is selling the Grade II-listed, 17th-century house. Loud Mythom is on the market at £1.1m

The house now needs some renovation, but offers 5,877sq ft of accommodation on three floors.

There is a large, open-plan living/dining room, a kitchen/breakfast room, a study, five or six bedrooms and two bathrooms. 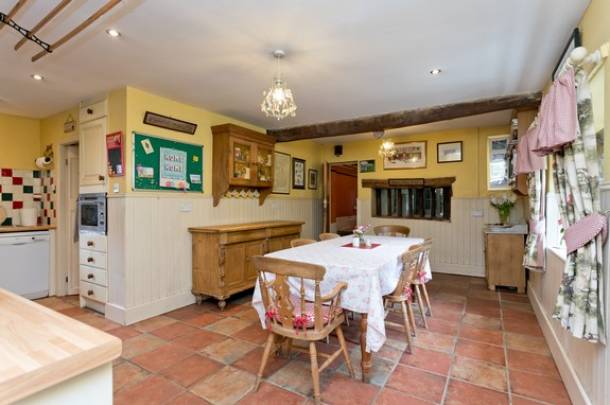 The sale also includes an annexe and outbuildings, some 15 acres of freehold land and woodland, and sporting rights over 96 acres of adjoining land. These include excellent single-bank fishing on the Hodder and single- and double-bank fishing on the Loud, plus walked-up and rough shooting, and there’s an original stone stable block.

A fascinating fragment of history tells us what the house was like over a century ago. In the late 1800s, John Weld of Leagram, an eminent naturalist and antiquary (and, like his forbears, a staunch Catholic) wrote about the house:

‘The old house of Loud Mythom, situated near to the junction of the Loud with the Hodder, had a claim at one time to be something more than a farmhouse… it is a heavy-looking building of rough walling, containing a ground floor, and rooms above, with one long chamber under the roof occupying its entire length, and lit by a window in the gable at either end. The house had many blocked-up windows with numerous mullions…

‘The above is a description of the house previous to 1879, in which year it was entirely rebuilt, except the outside walls. The roof, which had been covered with heavy stone slates and had given way in some places, was repaired and re-covered in Welsh slates.

‘The central chimney and soot chamber were done away with, and the whole interior rearranged more in conformity with present requirements. The old blocked-up windows, souvenirs of the window tax, were all re-opened and filled with large panes.’

Loud Mython is for sale at £1.1m via Ingham & Yorke and M. S. W. Hewetsons — see more pictures and details.