West Country properties have witnessed an unprecedented surge in demand, finds Penny Churchill, as she takes a look at a contemporary home in a spectacular setting.

With 35 years’ experience of selling country houses and estates in far-flung corners of the West Country, property consultant Martin Lamb thought he had seen it all — until Covid-19 turned the market on its head. ‘There’s always been a strong pull towards the South-West for buyers of both permanent and second homes from London and the South-East.

‘Quite simply, we have what they don’t: space, darkness at night, silence, fresh air, beautiful countryside, magnificent coastlines — all now more desirable than ever in the face of the restrictions imposed by the pandemic.’

Since May, Mr Lamb has acted on behalf of the vendors of six major properties, whose goal was to achieve a successful move within a reasonable time frame. Of those, three are now sold or under offer, the most significant being the Grade I-listed Cothay Manor on the Devon/Somerset border, a 15th-century house of national importance, sold through Knight Frank following a launch in Country Life on June 10.

Space means safe in the new normal. Add to that ‘an unbelievable position with total privacy, protection from the winds and the best sea views in Devon’ and you get Rock Vale, a contemporary, ‘grand design’ house in its own secret valley at Redlap, a hamlet between Dartmouth and the village of Stoke Fleming, within the South Hams AONB.

For sale through the Exeter office of Savills at a guide price of £7 million, Rock Vale is a spectacular, one-off house that looks out across colourful gardens established by a previous owner and down the valley to the sea. A measure of its appeal is the fact that Redlap House, in its own secret valley next door, sold through Savills for more than its £5m guide price in the summer of 2008.

Built to a largely open-plan design, Rock Vale offers 4,882sq ft of living space, including a cathedral-style entrance hall with a double-height vaulted ceiling and a floating staircase rising to the first floor.

The ground floor is laid out as a series of breakaway areas, including a snug/library with a wood-burning stove and a sun room. The living room, which is built with no corner posts to distract from the sensational views, has a glazed wall that opens onto the adjoining terrace.

The dining hall, which is located on a split level to the well-appointed kitchen, has been created beneath a double-height, green-oak and glass frame that fronts onto the rock face behind.

Overlooking the dining hall from the first-floor landing is a large drawing room with glazed doors leading to a wrap-around balcony. 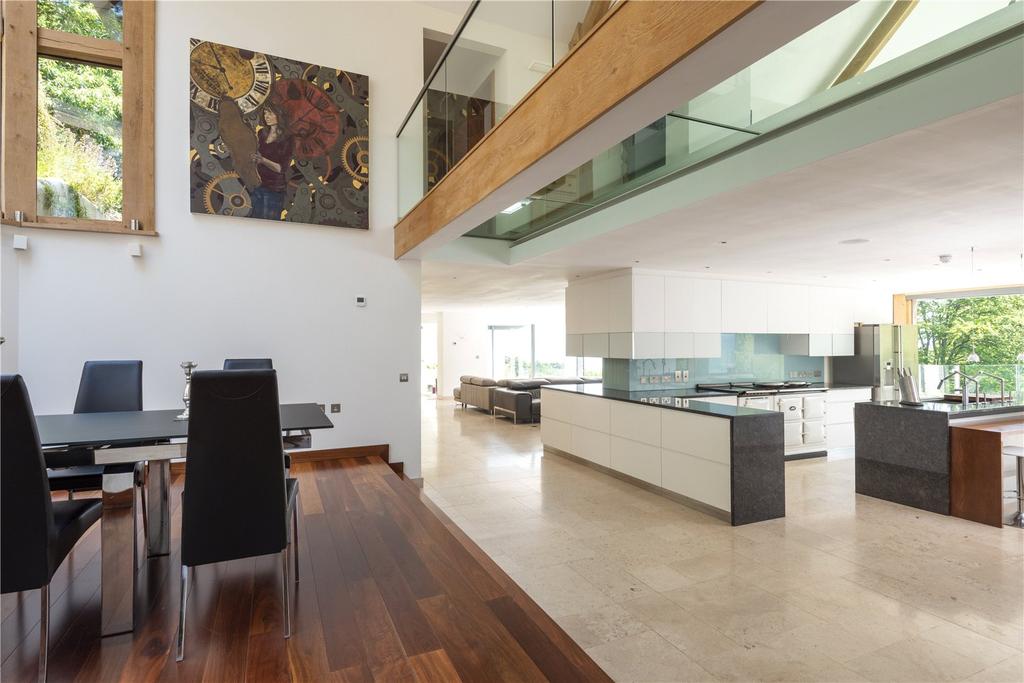 The principal bedroom has a freestanding bath with views of the gardens and the sea, plus its own private terrace. There are three further ensuite bedrooms and two further shower rooms, with a fifth bedroom currently used as an office.

Further along the drive and away from the main house, Rock Vale Cottage has a kitchen, a breakfast room, sitting room, three bedrooms, a shower and a bathroom.

At the bottom of the garden, on the site of an old mill, a 70ft-long modern agricultural barn stands alongside other useful outbuildings.

Rock Vale is for sale via Savills at £7m — see more pictures and details.

One of the greatest houses in Britain has come to the market: Cothay Manor, in Somerset. Penny Churchill takes a