Royalty, rockstars and a rose or two have all called the leafy district of Chiswick home. Carla Passino delves into what gives it its charm.

A cavalcade of climbing roses, fat hydrangeas and dainty Japanese acers line the quiet streets that head south from Chiswick’s High Road. Despite being bisected by the A4, this is a surprisingly leafy London village, peppered with parks, landscaped gardens and meadows — every immaculate lawn and blooming flowerbed pays tribute to the time when Chiswick was the home of British gardening.

In the early 19th century, the Horticultural Society (later the RHS) leased a piece of local land from the Duke of Devonshire, so it could experiment with plants, set up a greenhouse for exotic specimens and train its gardeners. There, it also held ‘very fashionable flower shows,’ says local historian Val Bott.

By the time the society began hosting its horticultural fêtes in 1827, Chiswick had long seen nursery gardens and manicured estates flourish alongside its fishermen’s houses, moorings and barley fields. Sandwiched between the Thames in the south and the road to Bath in the north, the area was relatively easy to reach.

This, together with plenty of flat, green land and a reputation for being salubrious, made it the ideal place for aristocratic and upper-middle-class families to build their country retreats. 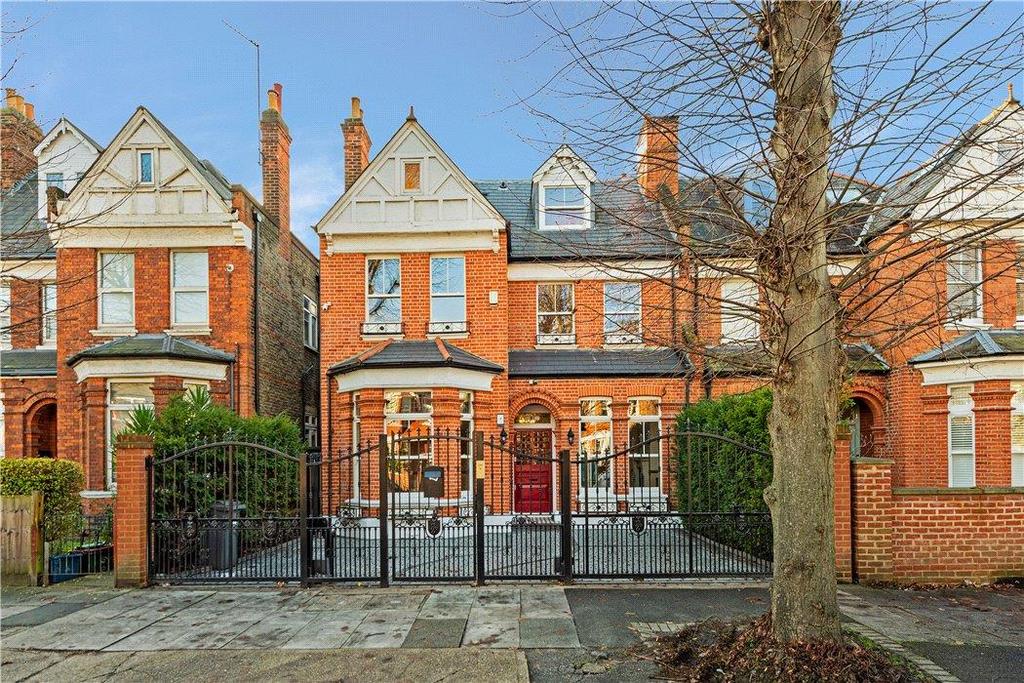 Set in Duke’s Avenue, this 3,268sq ft house is well suited to entertaining: its 37ft reception room has many charming features, such as a fine period fireplace, beautiful cornicing and oak parquet flooring. 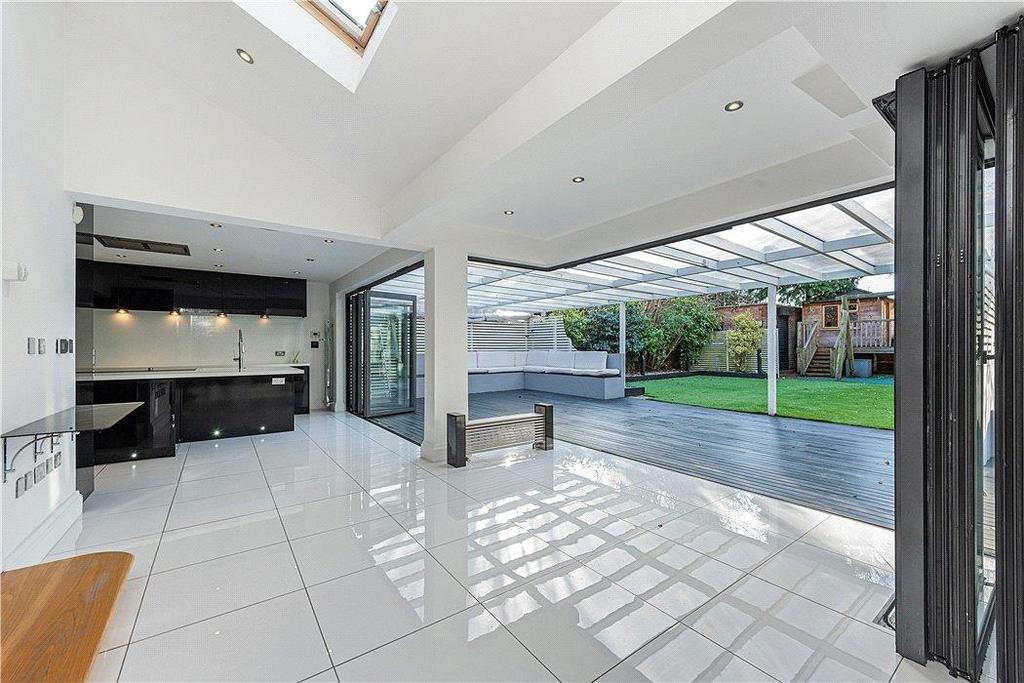 Also on the ground floor, the vast kitchen and dining area opens directly onto the west-facing garden. Upstairs are five bedrooms, including a large en suite on the top floor.
For sale via Knight Frank — see more.

Among the villas that have survived to this day, the most famous is Chiswick House, built in the late 1720s in neo-Palladian style by the 3rd Earl of Burlington and landscaped by the ‘father of modern gardening’, William Kent. Initially conceived as a place to entertain guests and hold the Burlington art collection, the house later became a favourite home for the Dukes of Devonshire, according to English Heritage’s senior curator Wendy Monkhouse — Georgiana, the 5th Duke’s wife, called it ‘my earthly paradise’.

Strand on the Green, Chiswick.

Over the years, the estate played host to dozens of distinguished visitors, from Handel to Tsar Nicholas I of Russia, Queen Victoria and, much later, The Beatles, who shot two promotional films in the gardens.

However, Chiswick House’s most colourful residents were the exotic animals that the 6th Duke of Devonshire kept on the grounds in the early 19th century: kangaroos, emus, elks and Sadi, the Indian elephant, famous for draping its shoulders in a scarlet cloak and scrubbing its pen clean with a brush. Today, the estate pays tribute to the lumbering giant with elephant-shaped topiary in the gardens.

The Fuller’s brewery has been a Chiswick landmark going back over 150 years.

A short walk east of Chiswick House reveals more of the area’s great houses, including Walpole House, a grand, but understated combination of brown bricks, intricate Corinthian pillars and a forest of chimneypieces that may been the inspiration for Miss Pinkerton’s Academy in William Makepeace Thackeray’s Vanity Fair (the author studied there for a while when the property was being run as a school).

Thackeray is one of the many writers and artists that have a connection with the area, which counted among its residents Alexander Pope, William Butler Yeats, E. M. Forster and, for a brief time, French Impressionist Camille Pissarro, who stayed at 62, Bath Road, to assist his seriously ill son, Lucien, and spent some of his time capturing views of Stamford Brook and Bedford Park. 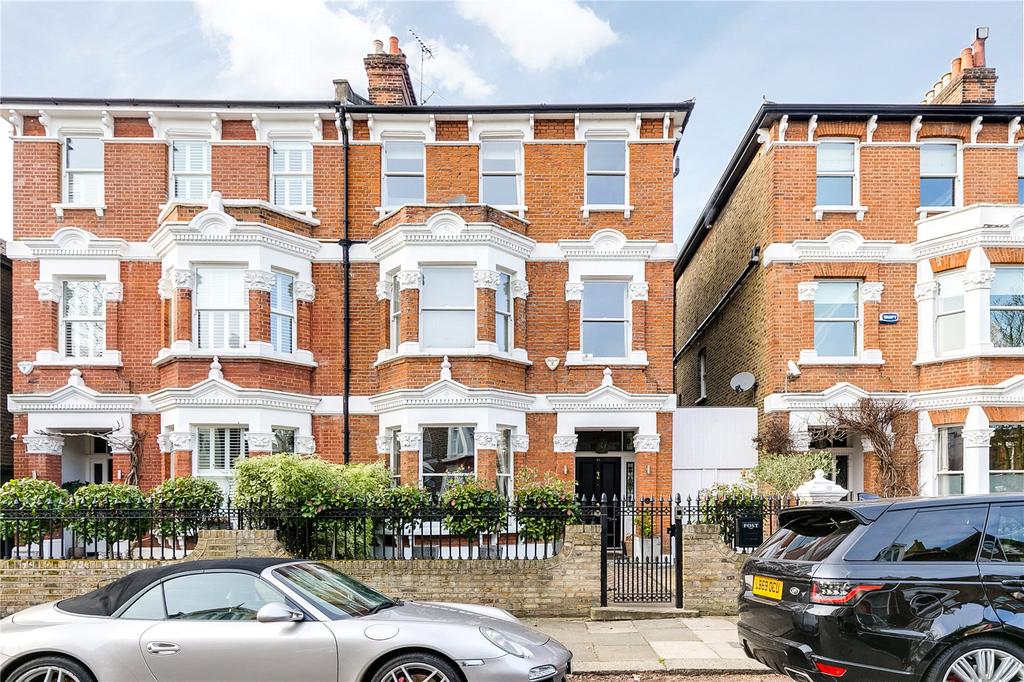 This fine townhouse has been extended and now spans almost 4,200 sq ft. It has plenty of living and entertaining space across the ground and lower-ground floors: the double reception room at the front of the house and the contemporary kitchen and dining area at the back are both magnificent. 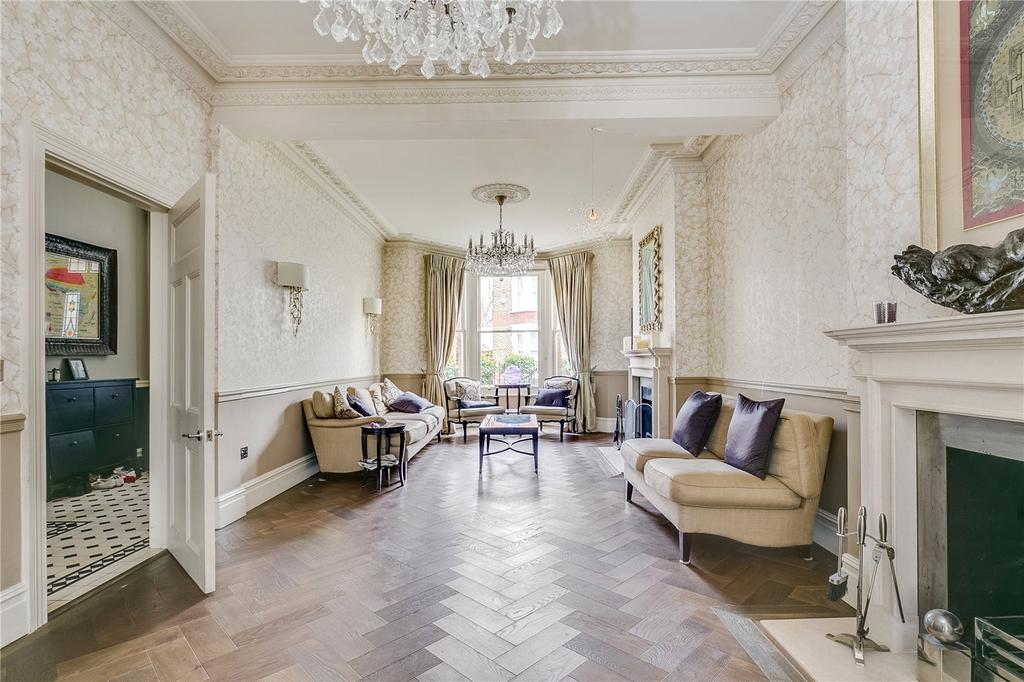 There are seven bedrooms, with an opulent master suite, while the rear garden is a sizeable 60ft.
For sale via Savills — see more.

The man most closely identified with Chiswick, however, is perhaps William Hogarth. In 1749, the artist bought his ‘little country box by the Thames’, where he escaped the hubbub of his London home and studio. Open to the public since 1904, the house has miraculously survived development plans, Second World War bombs and a fire. Today, a statue commemorating Hogarth — dog at his heels, palette in hand — stands on Chiswick High Road and, says Miss Bott, the pooch’s nose has been polished from being tapped by children.

The former house of William Hogarth in Chiswick.

Nineteenth-century Chiswick saw the boom of shipbuilding (with Thornycroft’s, a torpedo-boat pioneer) and local breweries. Much of that has vanished—although Fuller’s still operates from the site where beer was first made some 350 years ago — but recent decades have revived the area’s tradition as a centre of culture: writers, architects, designers and ‘a huge number of media people have settled here in the past 30–40 years,’ says Miss Bott. This has helped power events such as September’s Chiswick Book Festival (2020 may yet see a virtual edition), but hasn’t detracted from the local atmosphere.

Although the area counts many wealthy celebrities among its residents, it also has a core of people that have lived there for a long time. ‘Our very wide pavements in the High Road are places where people stop and talk for ages,’ notes Miss Bott. ‘We have lost that for the past few months and I can’t wait to get it back.’

Belgravia is the name on every Londoner’s lips, thanks to Julian Fellowes’s recent TV series of the same name. Carla

Today, Knightsbridge is home and host to the glamorous, but it wasn't always quite that way, finds Carla Passino.