Penny Churchill looks over a beautiful old house, full of history, which has come up for sale in Kent — and once a bit of work has been done, it will be among the finest homes in the country.

Mere House, although in need of modernisation, is everything a Georgian country house should be. With its 7,000sq ft of living space spread over four floors, and set against the backdrop of 25 acres of gardens, grounds and woodland, it’s one of west Kent’s most appealing country houses, a Grade II-listed home at Mereworth, near Maidstone, which is for sale at a guide price of £2.5 million through Knight Frank.

Light-filled rooms throughout include three main reception rooms, a kitchen/breakfast room, five bedrooms and two bathrooms on the first floor, three further bedrooms, a bathroom and separate flat on the second floor and a second two-bedroom flat on the lower-ground floor. 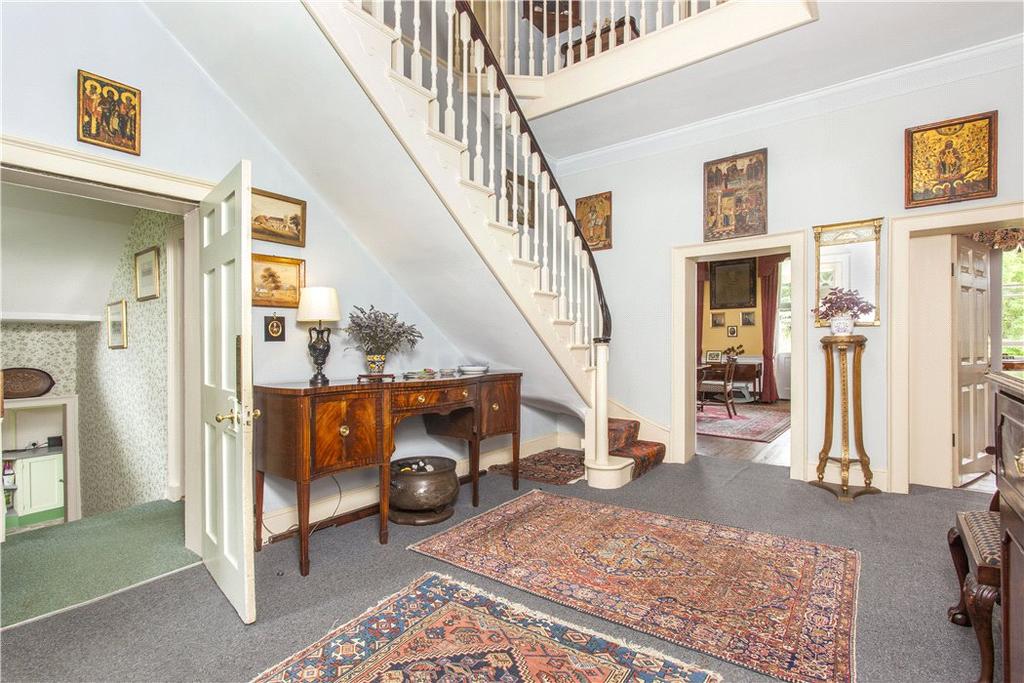 Included in the sale is Mere House Barn, a detached conversion set away from the main house, with two reception rooms, a snug, kitchen, master suite, three further bedrooms, a bathroom and a three-bay garage.

Mere House’s launch onto the market highlights an intriguing connection between the elegant Georgian former rectory and the libertine Sir Francis Dashwood, 11th Baron Le Despencer, founder of the secretive Monks of Medmenham, an extreme version of the notorious Hellfire Club. 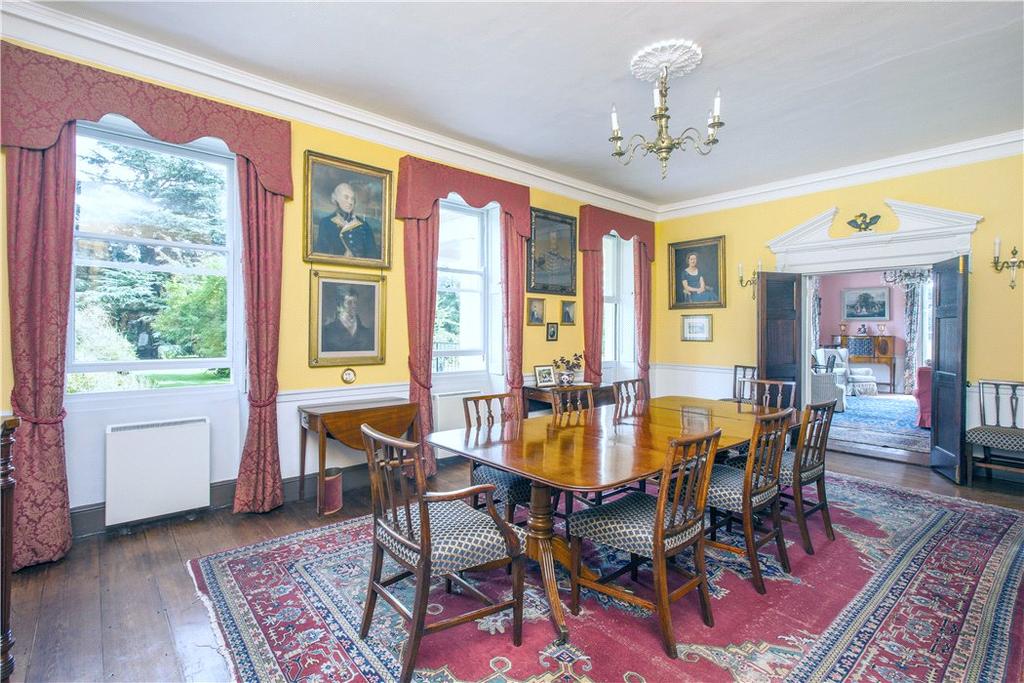 When John Fane, 7th Earl of Westmorland, died childless in 1762, his title passed to Thomas Fane, together with the family seat at Apethorpe, Northamptonshire. Meanwhile, Sir Francis Dashwood inherited, through his mother, the title of Baron Le Despencer and the Mereworth Castle estate, including the advowson of the spectacular St Lawrence’s Church, Mereworth, which had been built in the English Palladian style by the 7th Earl in the 1740s, following his removal of the village’s 12th-century church to allow for the enlargement of Mereworth Castle. 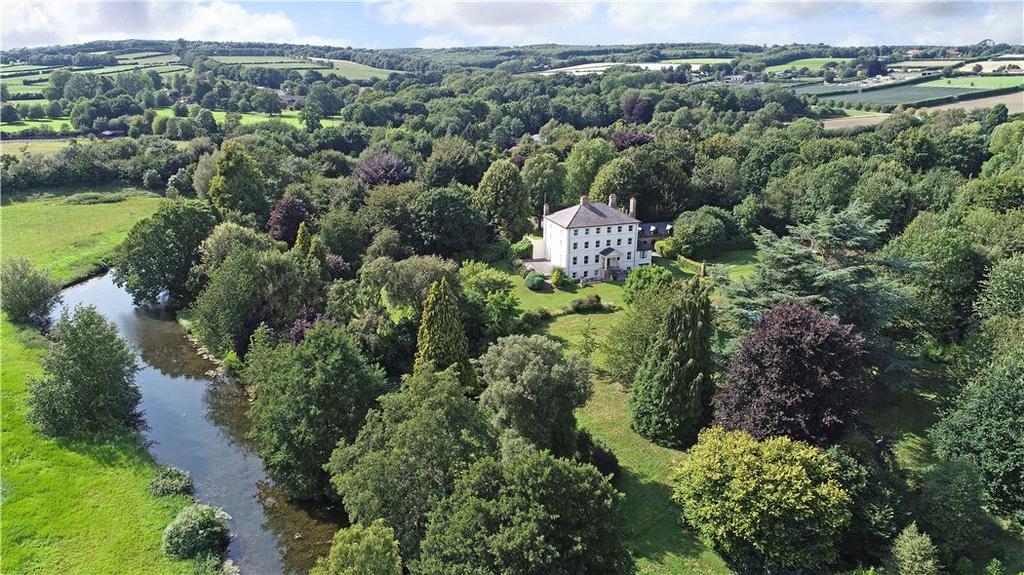 Le Despencer had the church ‘repaired and beautified’ in 1770 and, 10 years later, his friend the Greek Revivalist architect Nicholas Revett designed Mereworth’s equally imposing new rectory. Revett’s only known complete domestic building, it was built by Luffman Atterbury, a surveyor who, like Revett, had worked for Le Despencer at his Buckinghamshire home, West Wycombe Park.

In the early 1800s, the house was extended to the south and the roof was raised. In 1876, its appearance was further altered when Thomas Hardy’s mentor, the architect George Crickmay, removed the original glazing bars, inserting plate glass in taller windows and adding the front porch. 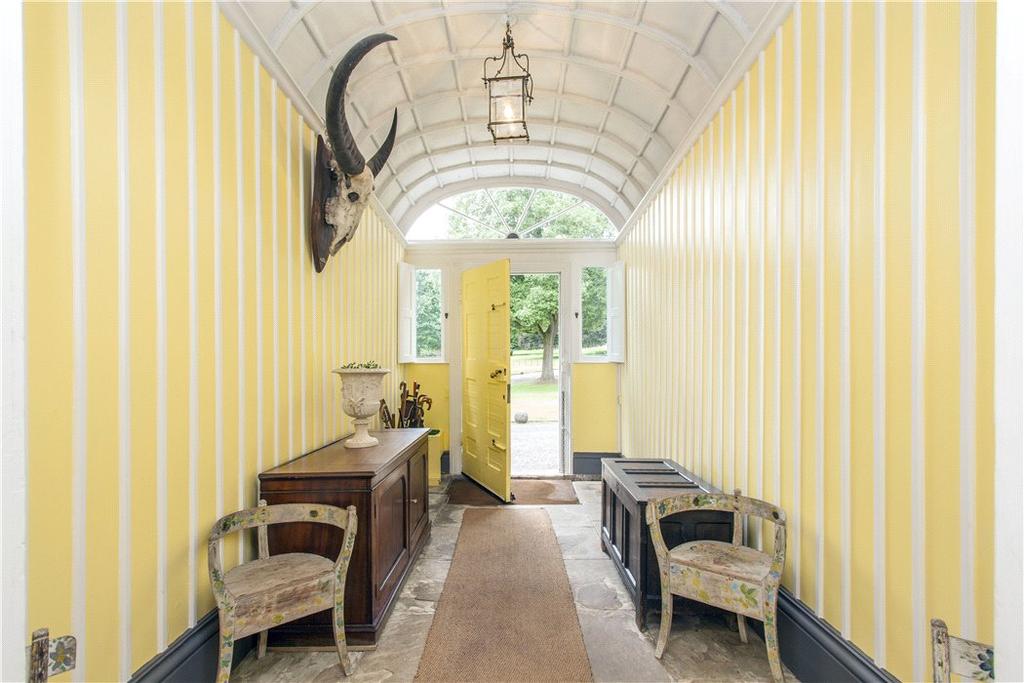 Until 1892, Mere House was the home of successive rectors and their tenants — all connected in some way to the Le Despencer family. They included William Foster Pigott, chaplain to Kings George III and IV, the Hon Miles Stapleton and his brother Sir Francis Stapleton, the sons of Dashwood’s heir, the 22nd Lord Le Despencer. Reginald Balston, a well-known early aviator, was the tenant from 1907 to 1913.

From 1913, Mere House again served as the village rectory, until, in 1958, it was bought as a family home by the late Sir John Julius Wells, who became MP for Maidstone the following year. The sale also restored the former rectory’s historic links with the house’s builder, thanks to Lady Wells’s maternal links to the Fane and Dashwood families. Their son, Andrew, and his wife, Tessa, are the current owners of Mere House.

The Wells family have lived in west Kent since the early 17th century and were major private shipbuilders on the Thames from the time of Pepys (who mentions them in his diaries) until 1810.

Gardening genes run deep in their DNA and the gardens they created at Bickley Hall, Bromley, and Redleaf Park, near Penshurst (both since demolished) were legendary in their day. 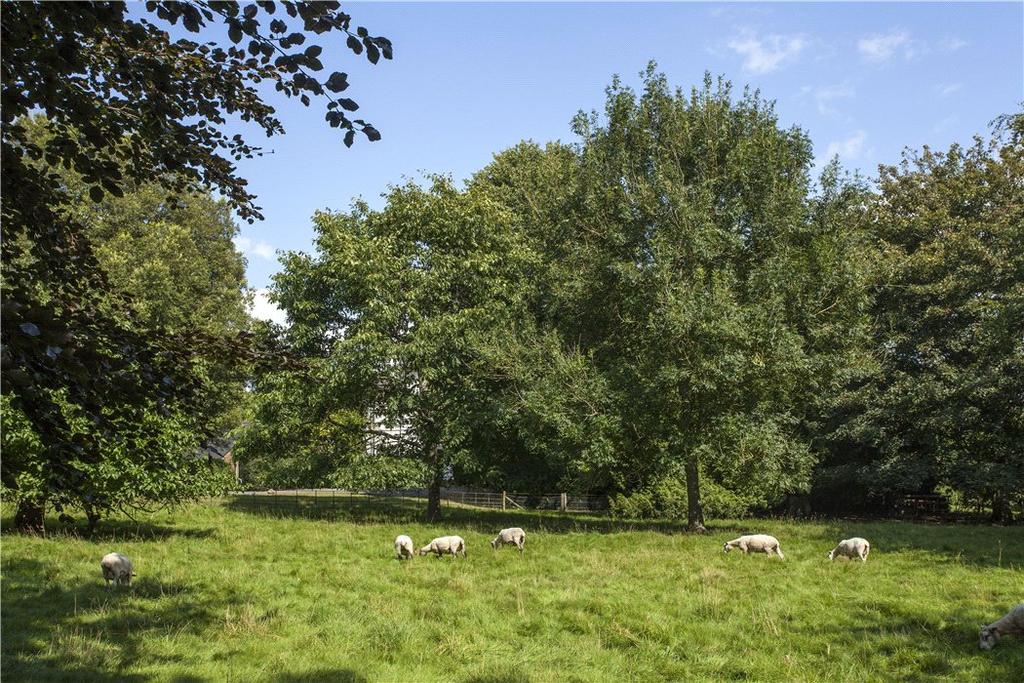 The family’s ‘green-fingered inheritance’ was celebrated in Country Life (March 8, 2017) by the gardening writer George Plumptre, chief executive of the National Gardening Scheme, who relates how, over a period of some 30 years, Sir John and Lady Wells created the present garden, carefully incorporating the finer trees — such as the copper beech and cedar — planted by their clergyman predecessors:

‘They planned their garden to fill the area sloping gently away from the house, down towards the long, narrow lake that itself dates from the 18th century landscaping… and [their] masterstroke was to make the main feature at Mere a spring garden and to devote the main sloping area to increasingly broad drifts of daffodils. Their numbers, having increased from one year to the next, now have the appearance of a floral sea, with waves of integrated shades of yellow-and-white flowers.’ 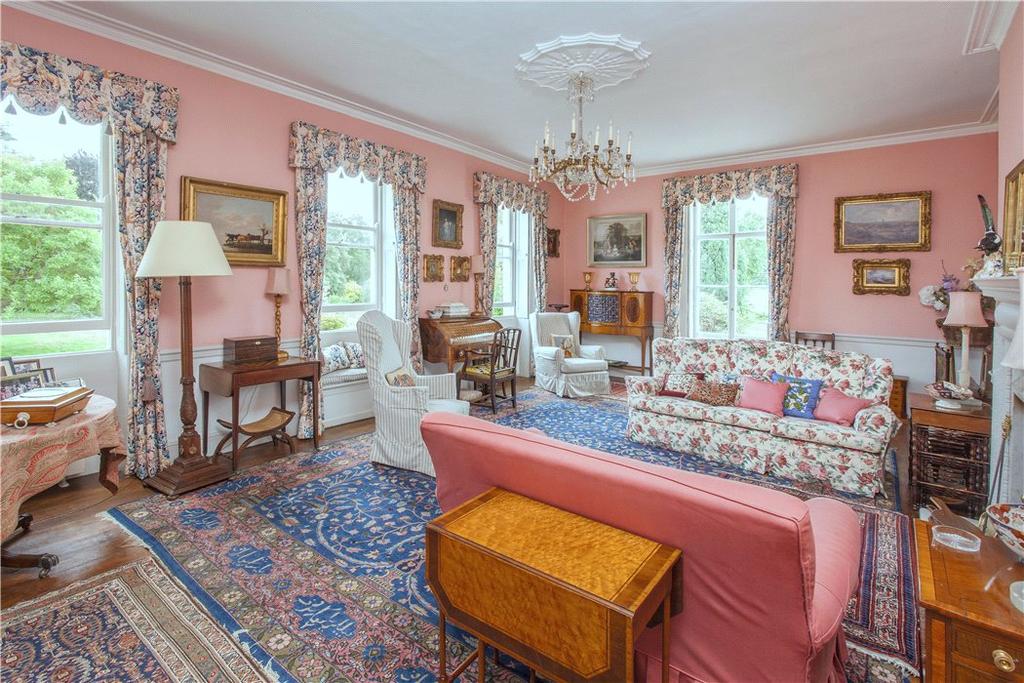 Beyond the lake, Sir John responded to extensive road-building projects around the village by acquiring spoil from the construction sites to build a long embankment, on which he planted trees. These have now grown to maturity, thereby deadening noise from the new roads and creating a tree-lined boundary for the house, which remains almost entirely hidden, even in winter.

On taking over the garden from his parents, Andrew Wells and his wife continued their work, adding a second embankment at right angles to the first. Following long-term silting up of the lake, the field beyond had deteriorated into semi-marshland, but with the lake restored, it is now once more fully integrated into the garden. 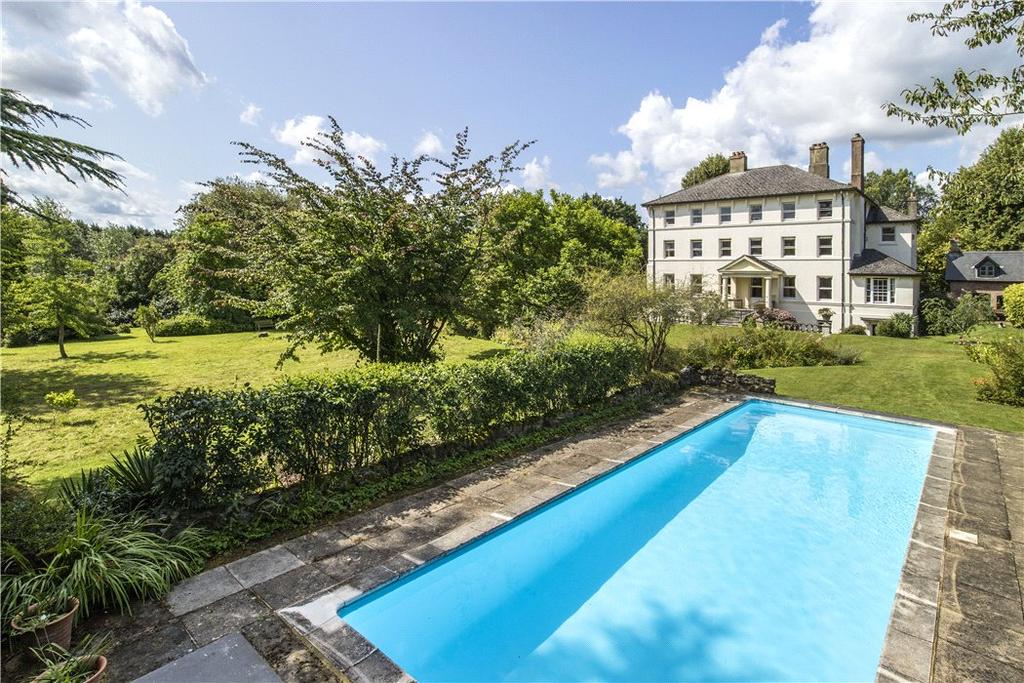 They have also added masses of snowdrops, both in the main garden and through the wood leading from the old kitchen garden, and planted numerous autumn-tinting trees, which can be seen in all their glory in the coming weeks — the gardens have been part of the NGS for more than 40 years.

Mere House is for sale via Knight Frank at £2.5 million — see more details and pictures.