A pair of magnificent houses have come to the market in two of the most exclusive communities in the London area: Wentworth and St George's Hill.

If you wish to live near London, but not in London, you are spoilt for choice. There are all manner of different places you could choose and still be within, say, an hour of the capital. You could have a beautiful home in a picturesque village in Sussex, buy a converted barn — complete with oast house — in Kent, settle in to one of the absurdly pretty riverside towns in Berkshire or otherwise pick out any number of other places in the Home Counties.

But for the wealthy and well-heeled who seek opulence and privacy, two places to the south-west of the city will always creep towards the top of the list: Wentworth and St George’s Hill. These two spots sit a few miles apart and either side of the M25 in Surrey, with Wentworth just outside and St George’s Hill just within. And they are rarities, offering a British take on the American country club lifestyle: both boast at their heart clubs with famous golf courses and other magnificent facilities among the secure, tree-lined roads that lead to grand homes among the manicured lawns. 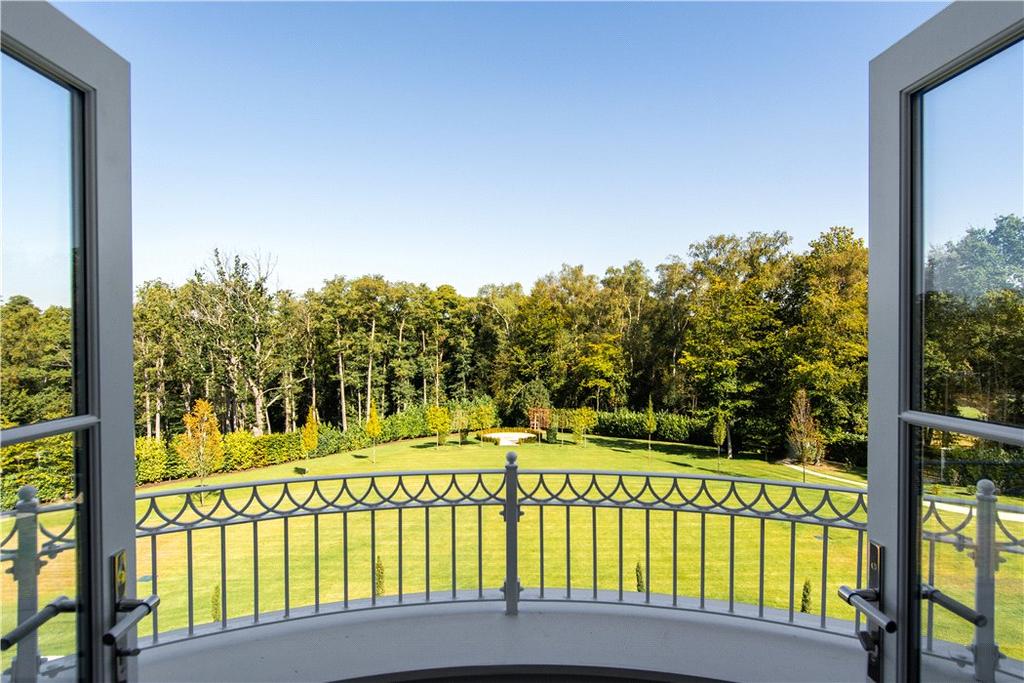 Houses come up for sale in both communities fairly regularly, of course — but they’re not often quite so spectacular as the two we look at today.

First up there is Woodshore House, in one of the most secluded spots in the entire Wentworth Estate. It sits at the end of its own private lane, adjacent to the 17th hole of the club’s East course, and it is on sale via Knight Frank at £15 million. 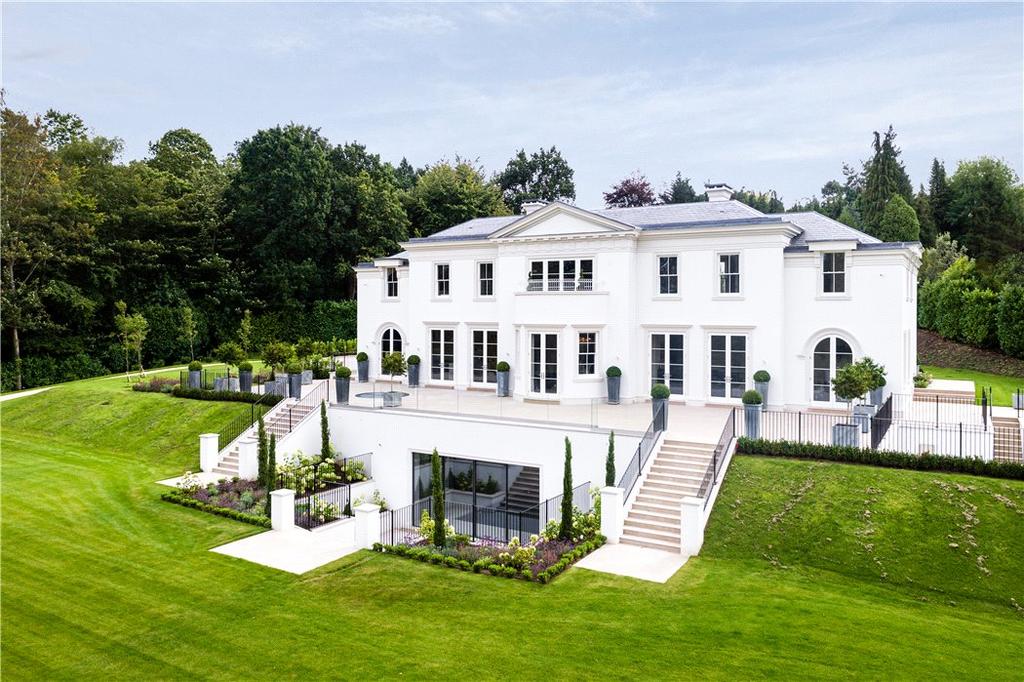 That money buys a newly-built house with five bedrooms, six reception rooms and a garage big enough to take a fleet of supercars, all set within an acre and a half of gardens. 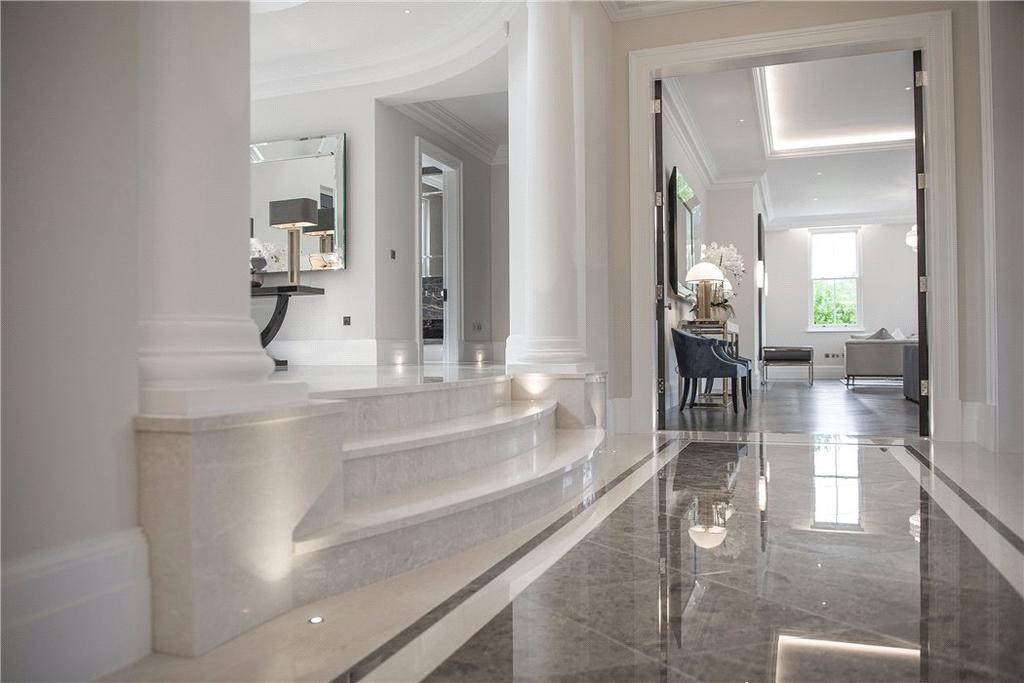 From the moment you walk in this is a place which feels more Beverley Hills 90210 than Virginia Water GU25, with a grand entrance hall complete with stone staircase that spirals up to a galleried landing. 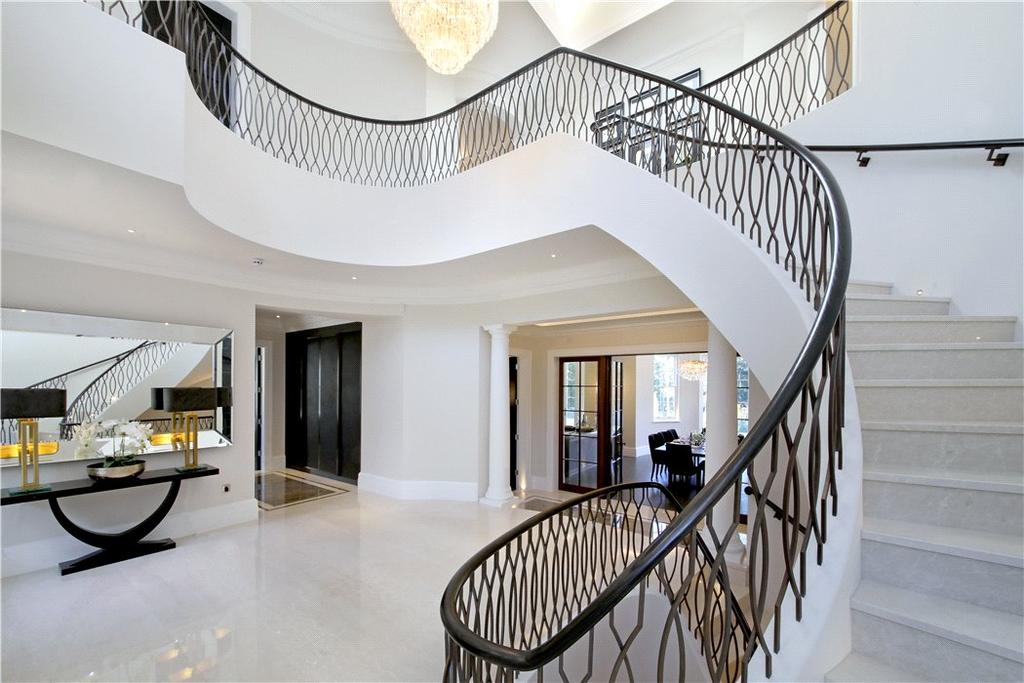 Every effort has been made to put together a place that has the feel of a top-end hotel rather: there’s a swimming pool complex and spa along with cinema, bar and a wine cellar. 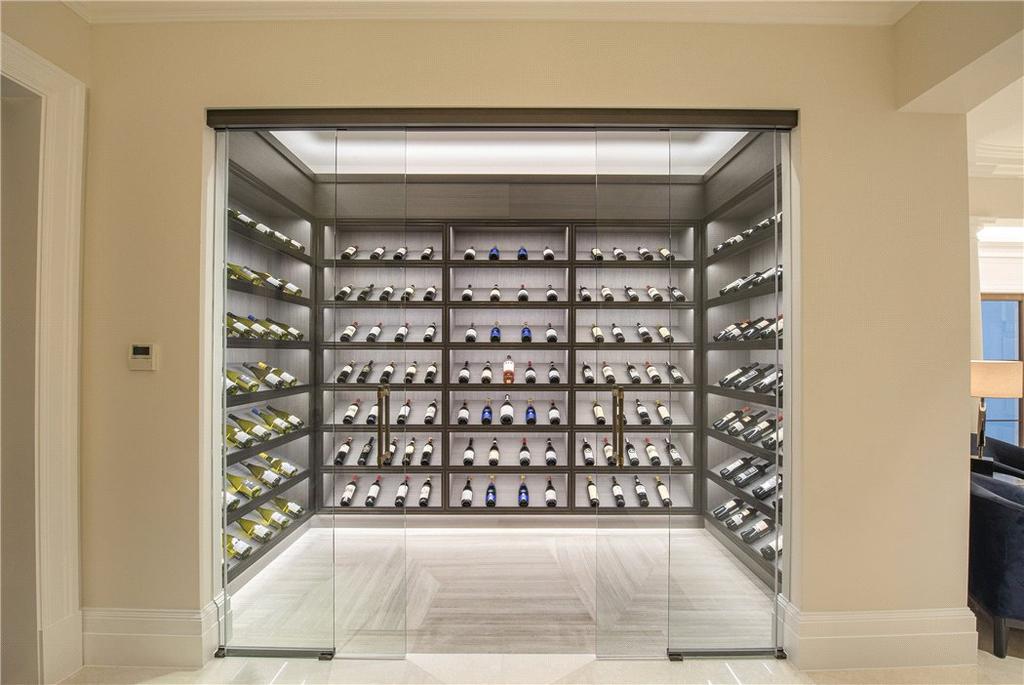 And to say that there are five ‘bedrooms’ seems a bit of a misnomer: the agents describe them as ‘bedroom suites’, which seems a bit fairer given the size of the rooms and their associated dressing rooms and en-suite bathrooms. 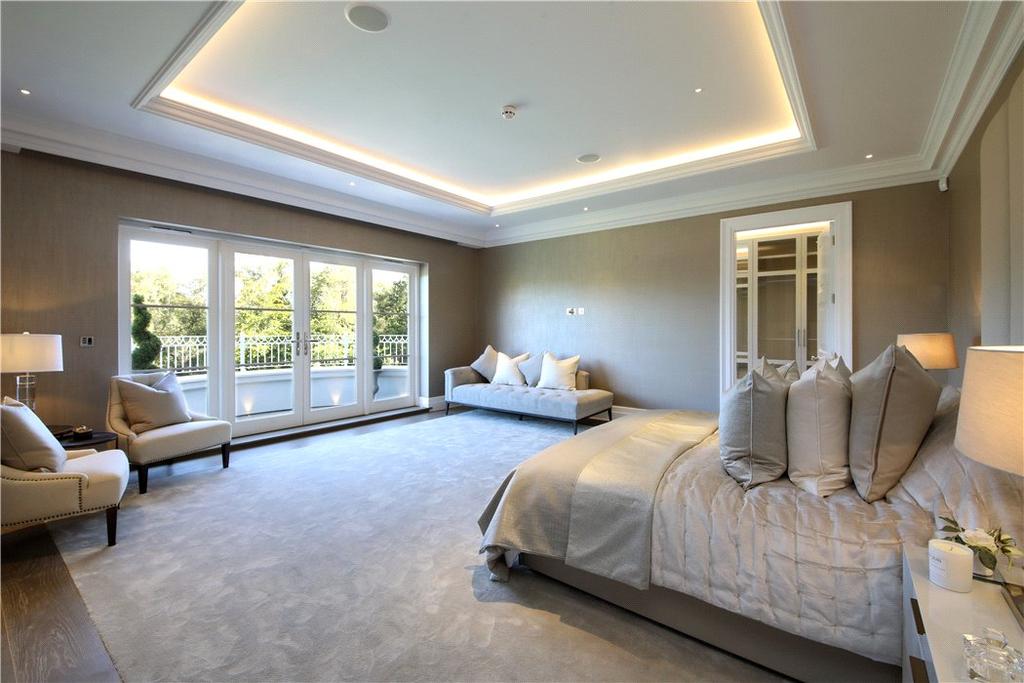 A few miles away in St George’s Hill, Woodlawn is on sale for £22,490,000, and there are a lot of parallels between the two. The house — described by Knight Frank as an ‘ambassadorial residence’ — is not on the open market, is similarly specified inside: an impeccably-finished place designed by period architect Julian Bicknell and built by the highly regarded Royalton company.

Though you won’t find Woodlawn on the property search portals, Mr Bicknell’s own website has a few more details (and a video) about the design process.

The heart of the living areas is the enormous drawing room, with a bay opening out onto the gardens; there’s a similarly-proportioned master bedroom occupying the same footprint on the first floor, with doors that open onto a balcony.

There is also a separate library, TV room and study among other spaces, while the copper-roofed pool complex also includes a gym and a treatment room.

Woodshore House and Woodlawn are for sale via Knight Frank’s country houses department at £15m and £22.49m respectively — and you can follow these links to find more property in Wentworth or St George’s Hill.

The world's super-rich are shrugging off the uncertainty that permeates the world and heading to the Wentworth Estate. Penny Churchill

Westbourn is the kind of place for someone who has everything – family and friends to fill the large bedrooms,