David Profumo takes a look at the lovely little dormouse – a delightful little creature which spends 75 per cent of its life fast asleep.

The common dormouse isn’t really a mouse, nor is it nowadays particularly common. This strangely endearing little rodent is seldom seen – being both nocturnal and arboreal – and is a byword for somnolence, spending up to three-quarters of its life asleep.

Our two British species are markedly different. The smaller, native common or ‘hazel’ dormouse (Muscardinus avellanarius) is more murine in appearance, whereas the much larger ‘edible’ variety (Myoxus glis – once fattened in earthenware jars as an ancient Etruscan delicacy) is bushier tailed and somewhat resembles a young grey squirrel. Originally introduced by Walter Rothschild at Tring Park in 1902, the latter’s population is largely confined to the Chilterns, where they can be a household pest, gnawing at cables and even biting humans.

The common dormouse is widely distributed across Europe and Asia Minor, but, here, its presence is patchy, with heartlands remaining in Surrey, Devon, Kent and central Wales.

It has seldom been found north of Durham and is absent from Scotland and Ireland. It was once more widespread and, in Victorian times, was often tamed as a pet; Beatrix Potter kept one and the naturalist Thorburn had a dozing-mouse that established its dormitory in his canvas sketching umbrella. 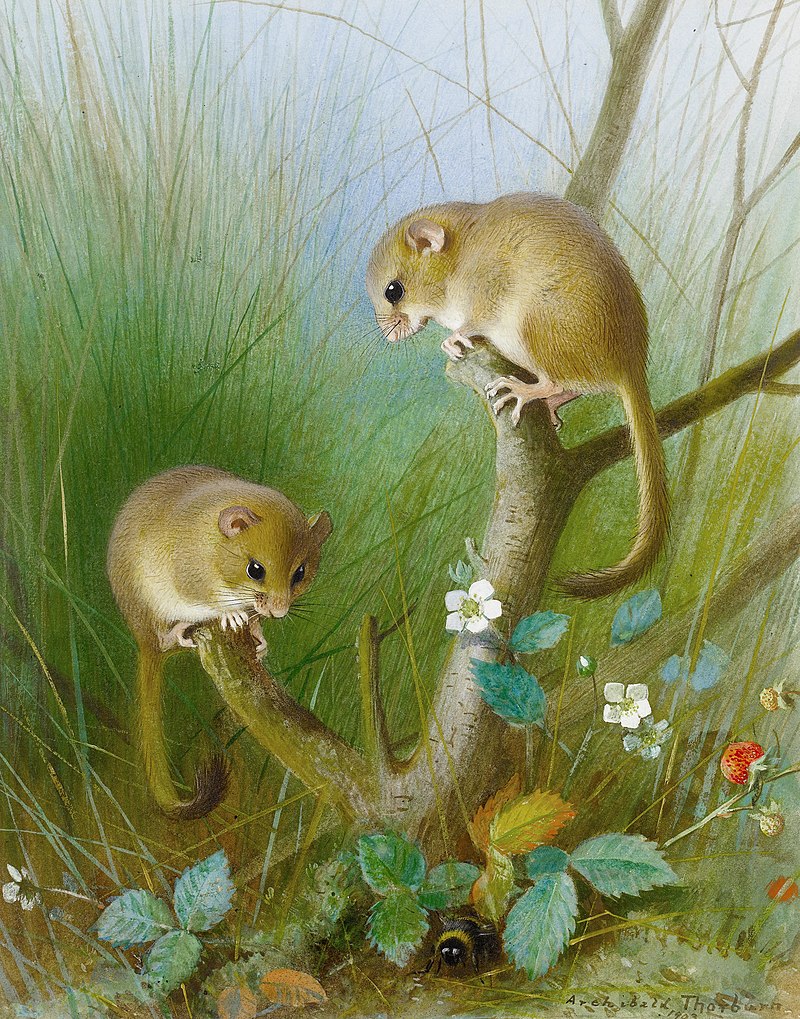 Dormice as painted by Archibald Thorburn

With a body measuring 3in and a tail of similar length, he’s a natty little fellow with a pointed face, prominent dark eyes and lively vibrissae. The soft pelage varies from a demerara-sugar hue to reddish or even black, but it’s not waterproof, making misty mornings or damp summers a misery.

The long, feathery tail (one in 10 of which is white-tipped) is covered in such delicate skin that it will easily peel off – a way of eluding the grasp of such predators as badgers and tawny owls. Folklore asserts that the little golden derrymouse is immune to the venom of vipers.

Dormice (the plural somehow sounds especially pleasing) frequent the fringes of deciduous woodlands – a similar habitat to nightingales – with a preference for second-growth chestnut, beech and hazel.

They seldom descend to ground level, but are agile aloft in the canopy of branches and, being double-jointed, can run down trunks headfirst. A decline in the practice of rotation coppicing – once vital for charcoal and wattle-pole production – has reduced dormouse numbers, which have shrunk by some 38% since 2000. The current UK estimate is about 45,000.

When they emerge in May from their five months of hibernation, dormice first feed on hawthorn pollen, then on honeysuckle nectar. Their diet is seasonal and includes aphids and caterpillars in summer, then the berry harvest of autumn.

Possessing no caecum, they can’t digest the cellulose content of most leaves. Hazelnuts are their chief delight, which they tackle while they’re still soft and green on the bough; the protein-rich kernels are extracted by nibbling a cavity that leaves telltale chisel-marks inside its rim.

By the end of October, the dormouse must double the reserves of its body fat in preparation for winter.

Although the origin of its English name is obscure, I’ve always liked the idea that it derives from dormeuse (a type of nightcap). Generally sluggish by day, the dormouse additionally enters periods of extended torpor in summer – a state of aestivation that can render it vulnerable. It may be found in three different types of nest.

The spherical summer nest is grapefruit-sized, usually located several feet off the ground and often fashioned from honeysuckle bark. The breeding nest – being prepared in June – is larger and lined with thistledown (they’re notably clean creatures). The hibernaculum is constructed on or below ground, frequently in leaf litter.

From October until late spring, the ‘seven-sleeper’ slumbers beneath tree stumps or in haystacks, tail swept around its face, wheezing gently. Its heartbeat drops to one tenth of the normal rate to minimise consumption of energy. Mild winters don’t suit the dormouse, as any awakenings expend precious bodily reserves. Climate change is not proving kind to them.

Unusually for a small mammal, the hazel mouse produces a single, late litter (wood mice can manage six litters a year). Breeding peaks in June, but little is known of its love life. Perhaps because it spends just a quarter of its lifespan awake, the dormouse is blessed with longevity, living up to four years (the vole has a life expectancy of just six months).

The most celebrated literary dormouse appears in the Mad Hatter’s Tea Party, where it’s being used as a cushion and speaks of treacle wells. Somewhat improbably, because of the hallucinogenic associations of Wonderland’s hookah-sucking caterpillar, this scene features in the narco-lyrics of Jefferson Airplane’s song White Rabbit, which ends: ‘Remember what the dormouse said/ Feed your head, feed your head.’

Carroll’s creation more endearingly maintains: ‘I wasn’t asleep… I heard every word you fellows were saying.’

With this shy litle creature being reintroduced into woodland areas in an attempt to halt its extinction, we reveal 11

From deciduous woods yet to fill out with leaf, to windswept hilltop shingle beach and riverbank, our flora can give

Simon Lester goes out on a limb to identify species and stop us barking up the wrong tree.