Newton House had been in the hands of the same owner for almost 400 years before it was purchased in 2007. An epic restoration proves worth the work in Somerset, as peace returns to a Hampshire park.

As anyone who has undertaken the renovation of an ancient manor house soon learns, the road to restoration never did run smooth. Certainly, nobody knows that better than Robin Cannon and his wife, Jane, who decided to buy and restore historic, Grade I-listed Newton House and its gardens at Newton Surmaville, near Yeovil, Somerset, when it came to the market in 2007, after it had been in the hands of the same family for almost 400 years. 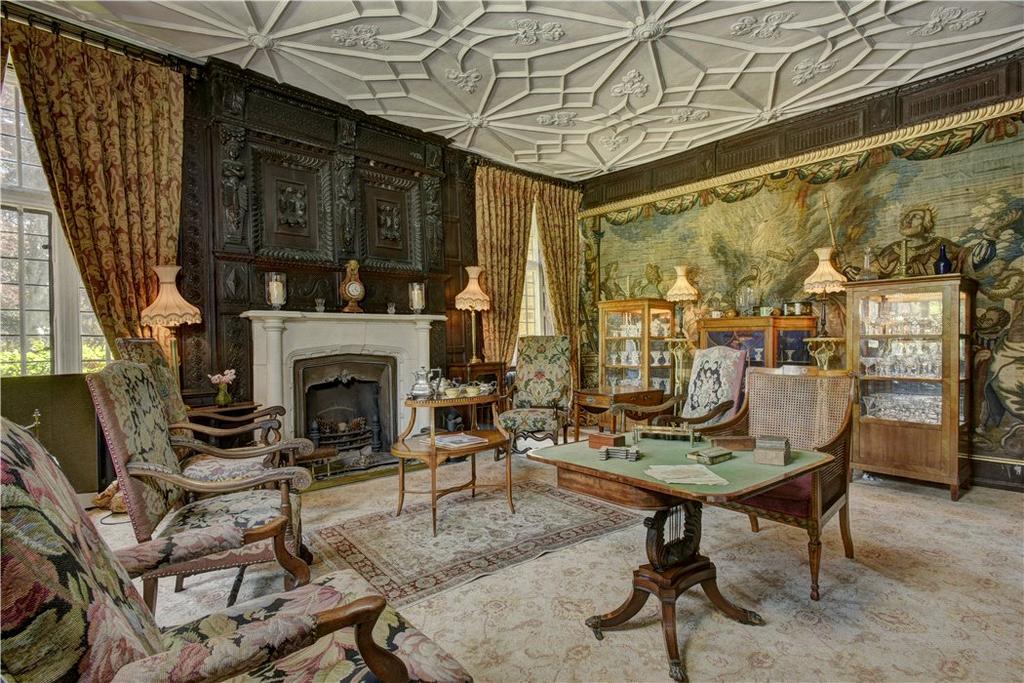 Now exhaustively restored and equipped for the 21st century, Newton House and its 62 acres of gardens and parkland on the banks of the River Yeo, either side of the Somerset/Dorset border, is for sale through Knight Frank at a guide price of £5.95 million.

The Newton Surmaville estate was owned by the Norman de Salmonville family from the early 13th century, and passed down the female line before being sold in 1510. For sale again in 1608, it was acquired by a wealthy clothier from Blandford Forum, 82-year-old Robert Harbin, who, despite his years, demolished the existing house and built himself a grand new mansion, completed in 1612.

Although hit by fines during the Commonwealth, the Royalist Harbins managed to hang onto their estate and, in the early 18th century, Wyndham Harbin kept a diary recording work in the garden that included the planting of apple trees and asparagus beds. In the mid 18th century, Wyndham’s son, Swayne, built a landmark summerhouse on the summit of nearby Newton Hill and planted the hillside between the folly and Newton House. 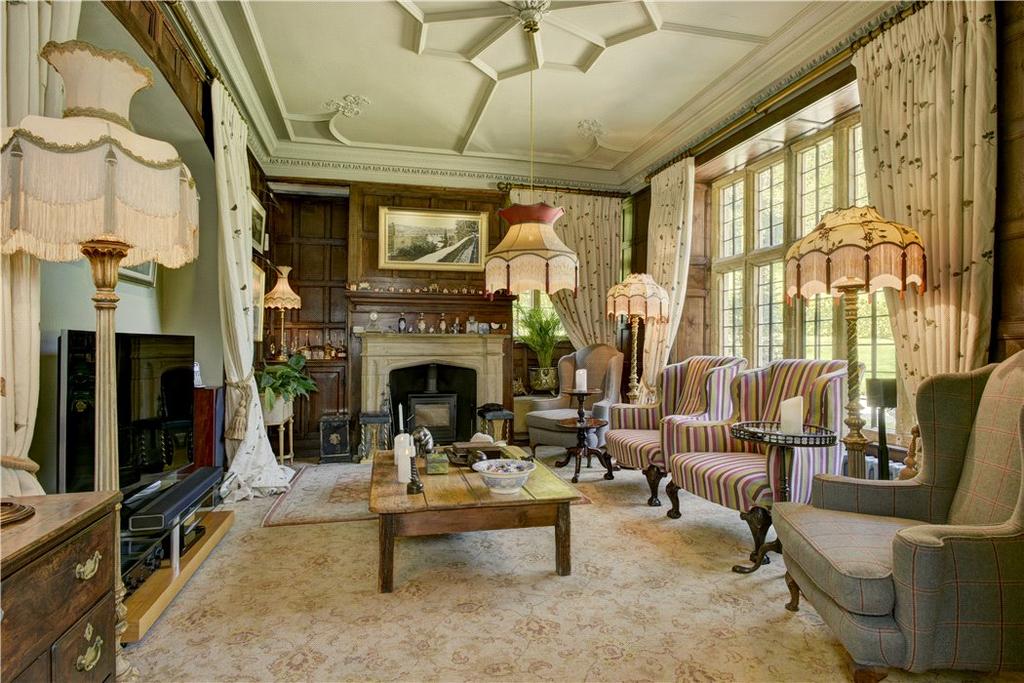 In 1837, Swayne’s son, Wyndham, bequeathed the estate to his nephew, George Harbin, who undertook a scheme of restoration and improvement in the 1860s and 1870s, engaging the Yeovil architect Joseph N. Johnstone to create the central courtyard and the first-floor library, lit by an oriel window (Country Life, September 5, 12 and 19, 1952). Following George’s death in 1880, the house was occupied by his widow until 1898, before passing to an elderly nephew, Henry Harbin, and then to Henry’s nephew, the Rev Edward Bates, Prebendary of Wells Cathedral. 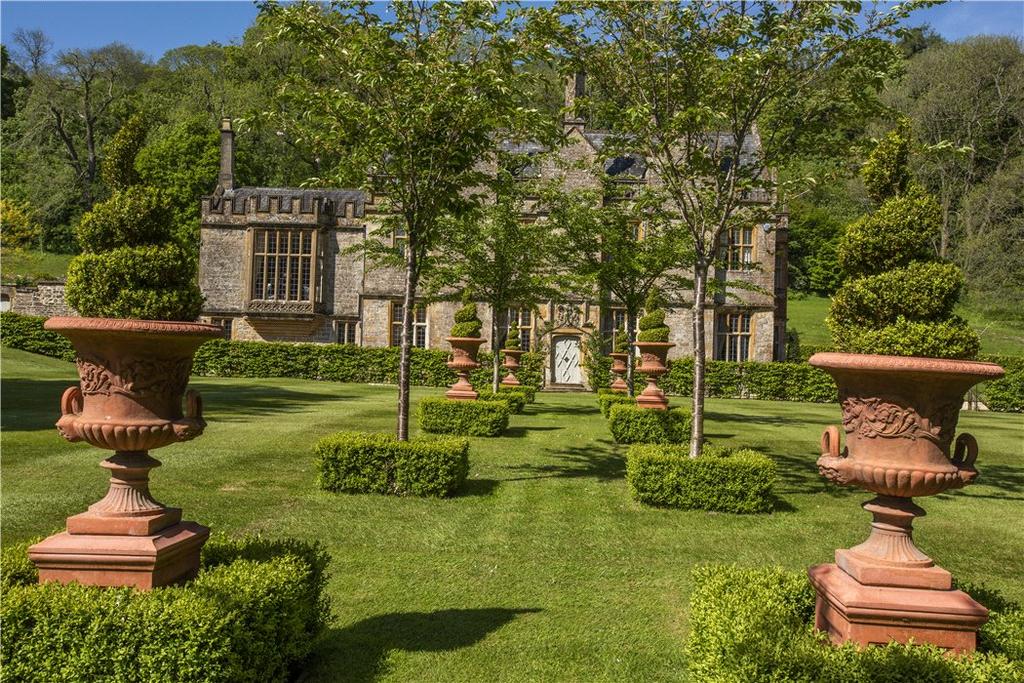 He took the name Harbin and, with his wife, Hilda, developed the gardens around the house in the early 1900s. Mrs Bates Harbin stayed on at the estate after her husband’s death in 1918 and further developed the gardens, until the outbreak of the Second World War. She died in 1962, leaving the estate to her daughter, Sophie Rawlins, who lived at Newton House with her husband until her own death in 2006, selling off bits of land to keep the estate running when funds were short. 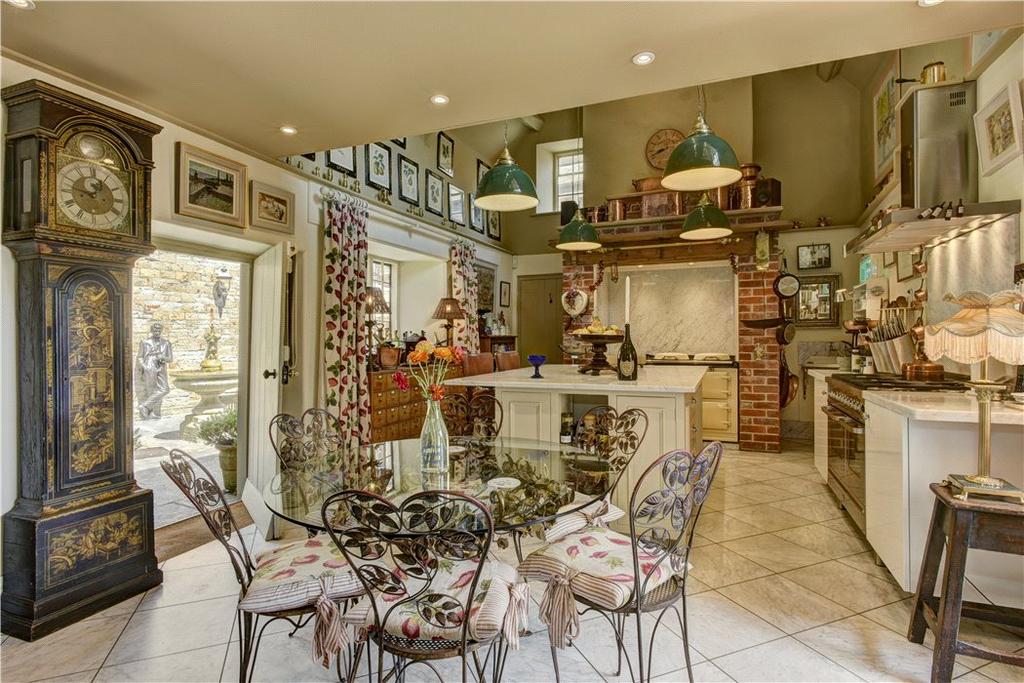 Looking back over their time at Newton House, Mr Cannon admits that he totally underestimated the amount of time, money and emotional wear-and-tear the project would involve: ‘We bought the house in 2007, then, a year later, came the financial crash, after which no financial institution would lend money to restore a medieval manor house that hadn’t been maintained since Mrs Bates Harbin’s day. It was as if the house and gardens had fallen into a deep sleep – in fact, the whole place looked exactly like the photos in the 1952 Country Life articles.

‘The house was structurally sound, but the entire roof needed re-doing, as did the plumbing and electricity. There were 45 rooms of all shapes and sizes, but only 12 radiators to heat them. We now have radiators everywhere, as well as open fires in all the main rooms. We also installed two huge new boilers and a pressurised water system that ensures instant hot water on every floor.

‘When it came to decorating, perhaps the strangest thing was that the walls of every room in the house were painted black. This followed the death of Prince Albert in 1861, when the Queen’s loyal subjects were urged to support her in her grief by painting their houses black. Everything at Newton Surmaville was painted black, then never touched again. Unfortunately, English Heritage’s people thought this was a nice historical touch and refused to allow us to change the colour; it took us ages to persuade them to change their minds.’ 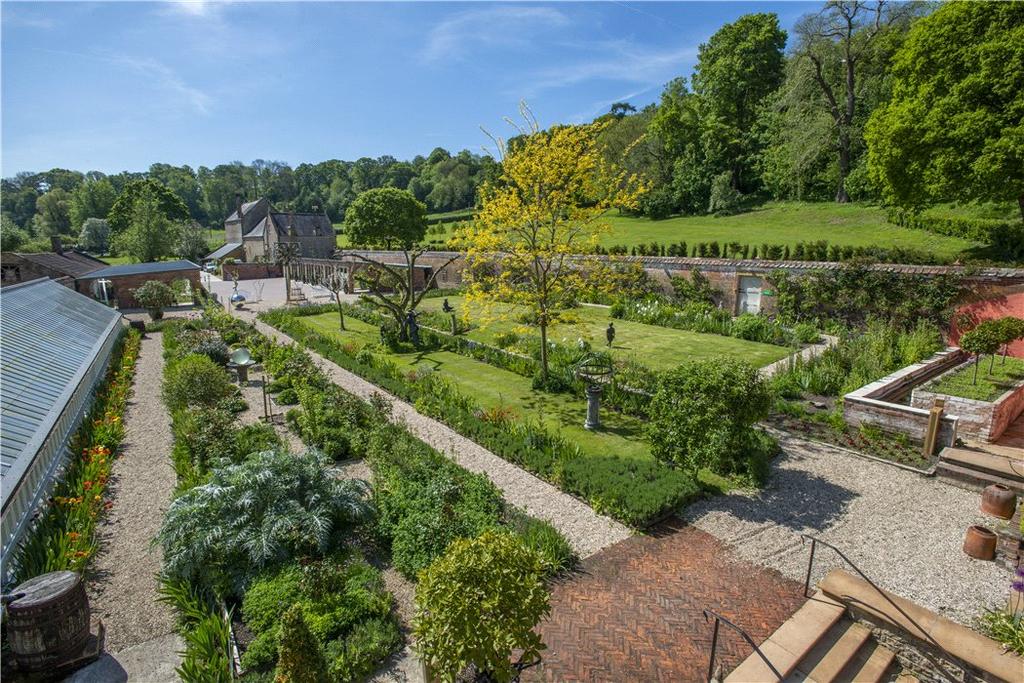 Over the years, Mr and Mrs Cannon have filled Newton House with their own fine paintings and furniture, in addition to the magnificent tapestries that have graced the walls of the house for centuries and, under the terms of its listing, are included in the sale. 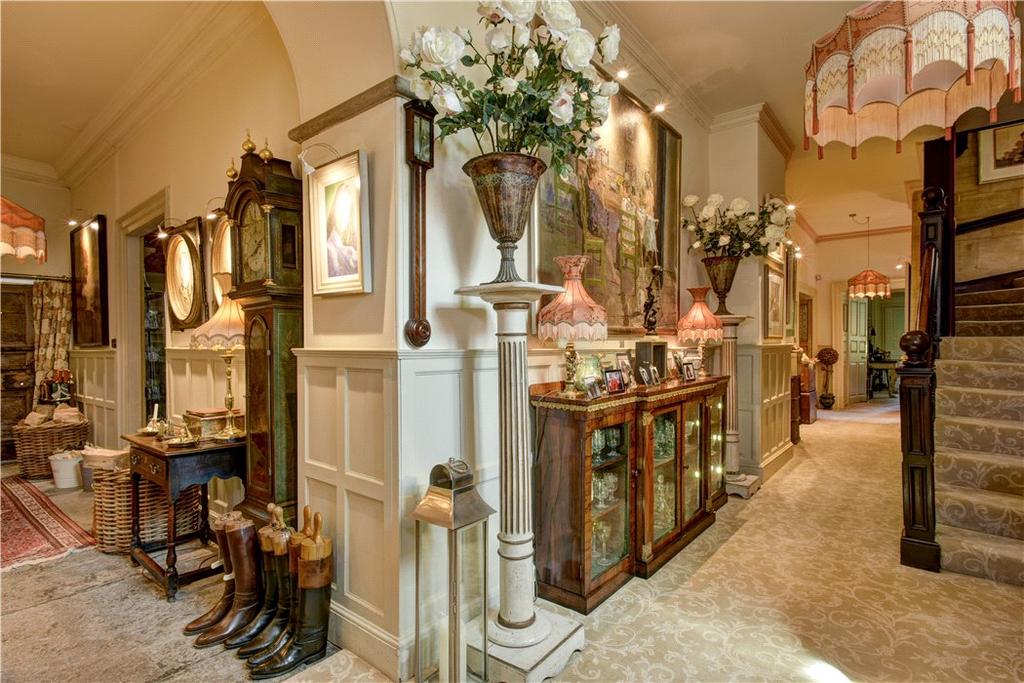 They have spent considerable time and investment restoring and enhancing the gardens and grounds, planting hundreds of trees and creating woodland walks along the banks of the river, and even built two large garages to accommodate Mr Cannon’s collection of vintage Bentleys. Various outbuildings have been converted to house an award-winning gin business, which new owners can continue, should they wish. 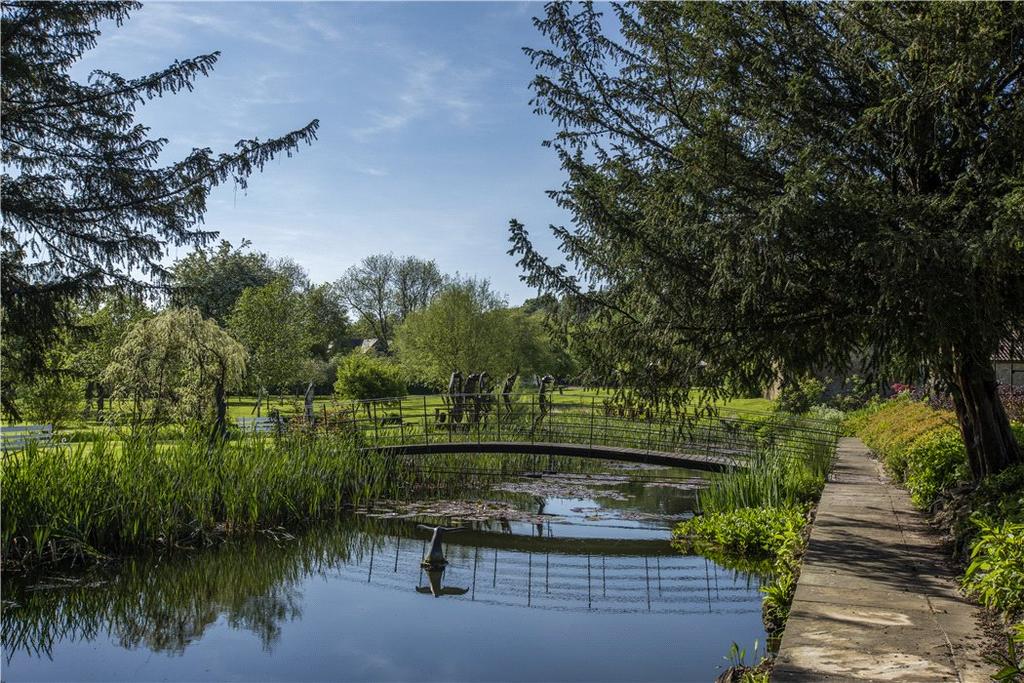 It all makes for a heady mix of old and new.

With more than 15,000sq ft of living space, Newton House offers five colour-filled reception rooms – the Great Hall, drawing room, dining room, the Justice Room or study and the library, plus a kitchen/breakfast room, various domestic offices and a wine cellar on the ground floor. The first floor houses a palatial principal bedroom suite, three further suites, a sitting room, a conservatory and a home cinema, with five more bedrooms and three shower rooms on the second floor. A three-bedroom former gardener’s cottage is currently used for holiday lets and, for relaxation, there are acres of manicured parkland and woodland to wander through, with single- and double-bank fishing on the River Yeo.

Newton House is on the market with Knight Frank at a guide price of £5.95 million. Click here for more information and pictures.

Foxcote Manor is the perfect country house – large without being unmanageable, with plenty of grounds and good transport links to