Ecclesden Manor is an ever-changing marvel of a house that has seen great changes in the last 700 years – and now it's time for the next custodians to take it on.

In A Book of Houses, the eminent Victorian architect Ernest Newton defines the essence of what Country Life might modestly refer to as a ‘smaller country house’, but which most people today would call ‘a good-sized, manageable country home’.

‘A small house,’ Newton wrote in 1890, ‘is in many ways more difficult to design than a large one, for while every part must be minutely schemed, nothing should be cramped or mean looking, the whole house should be conceived broadly and simply, and with an air of repose, the stamp of home.’

That seems the perfect description for the Grade II*-listed Ecclesden Manor, near the West Sussex village of Angmering, which is for sale via Savills at a guide price of £2.95 million. 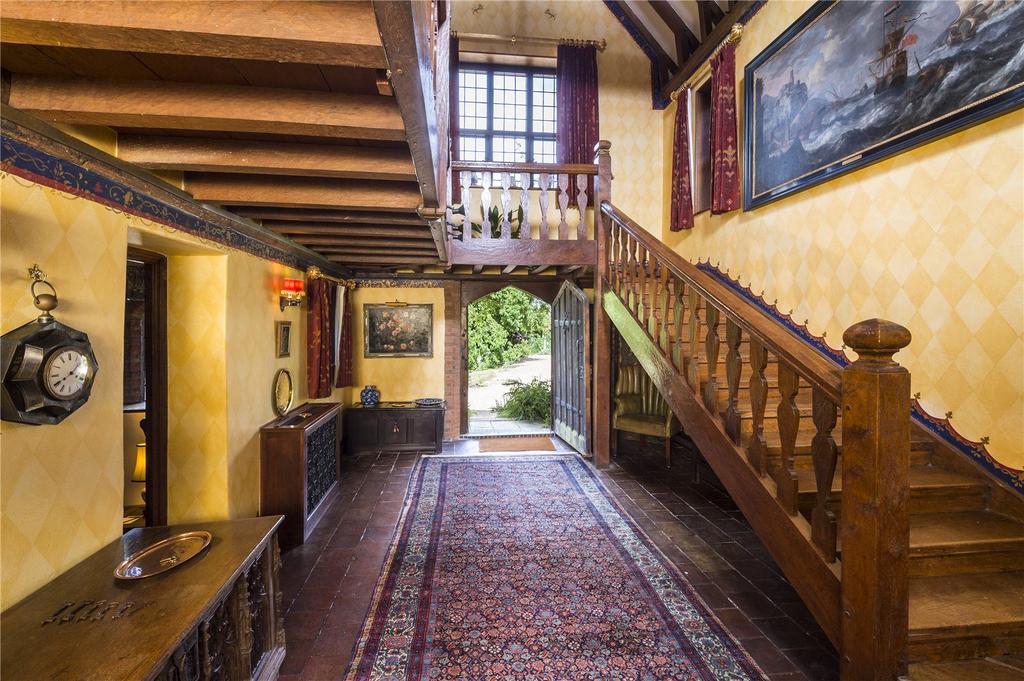 Trailing clouds of happy memories for its owner, Sue Holland, whose family home it’s been for 25 years, Ecclesden Manor stands in some 10 acres of landscaped gardens, lakes and light woodland, a mile east of this village on the southern boundary of the South Downs National Park.

First recorded in 1324, and still the most imposing building surviving in the Angmering area, the manor is described in Pevsner as ‘a long, low, comfortable, Tudor-looking building; it takes a keen eye to spot the tiny 17th century touches’.

Although its 1954 listing claims that the house was built by John Forster in 1634, recent research suggests that it was more likely the work of three generations of the Baker family, who were landowners and farmers in these parts before 1590. 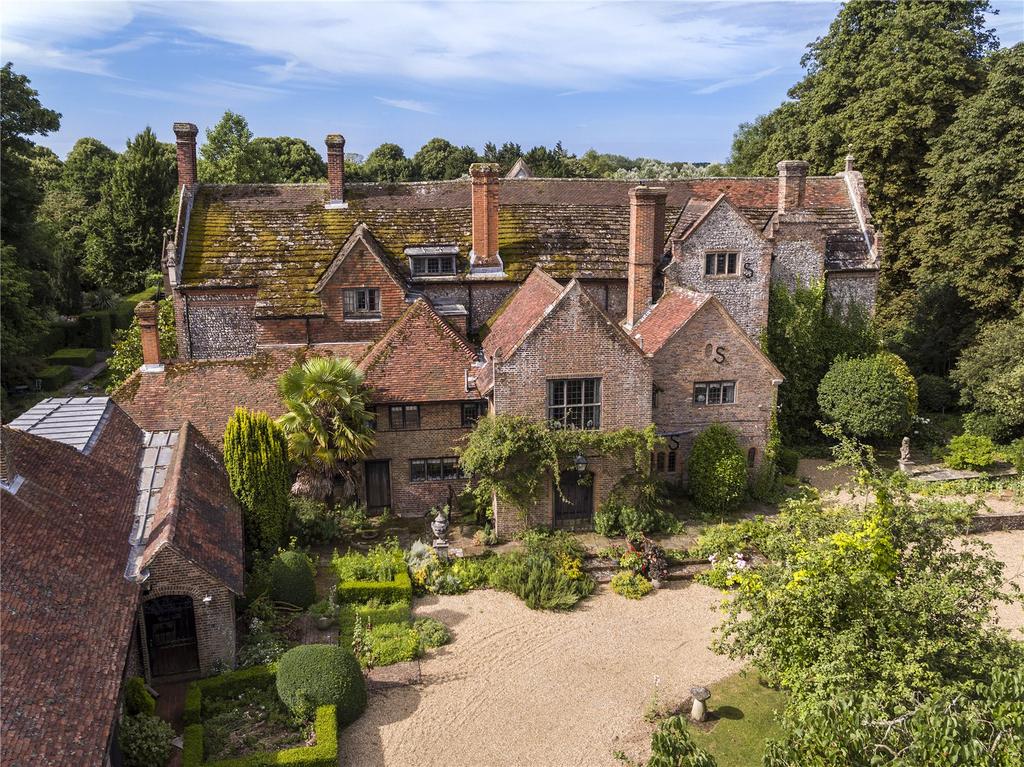 In 1751, the farmhouse, built of brick and knapped flint, comprised the kitchen, hall and parlour on the ground floor, with three main bedrooms above and servants’ rooms on the attic floor.

A photograph from 1910 shows the house looking much as it does today, having been extended to the east in the 1870s, when the accommodation apparently included four reception rooms, seven principal bedrooms, eight secondary bedrooms and a billiard room.

By the early 1900s, the manor had been separated from the farmland and was let to ‘gentry’, until, in 1912, the entire estate was bought by Walter Butcher who, according to Angmering historian Francis Skeet, ‘with great care and taste restored the ancient edifice to its former worthiness, as an early seventeenth century manor house’. 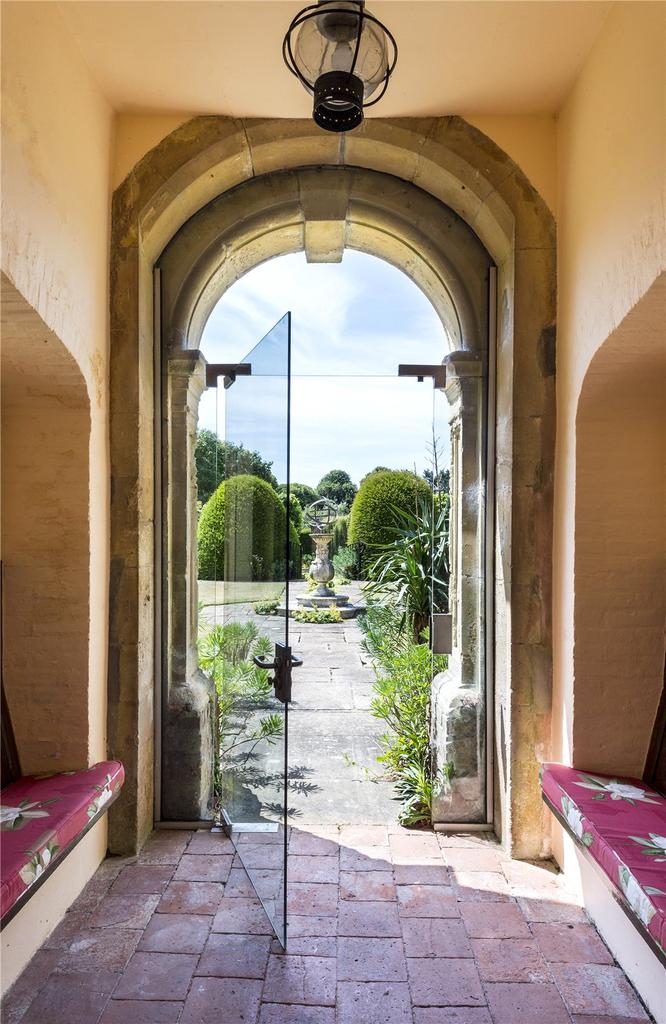 Precisely what changes Butcher made to the house are unclear, but today’s accommodation includes all the important 17th-century rooms, among them the entrance hall, the medieval screens passage, the drawing room/Oak Room, the library and the dining room.

There are also more recent additions, such as the garden room (below) and the kitchen – ‘although it took me 15 years to persuade my husband to install a new one,’ Mrs Holland says. 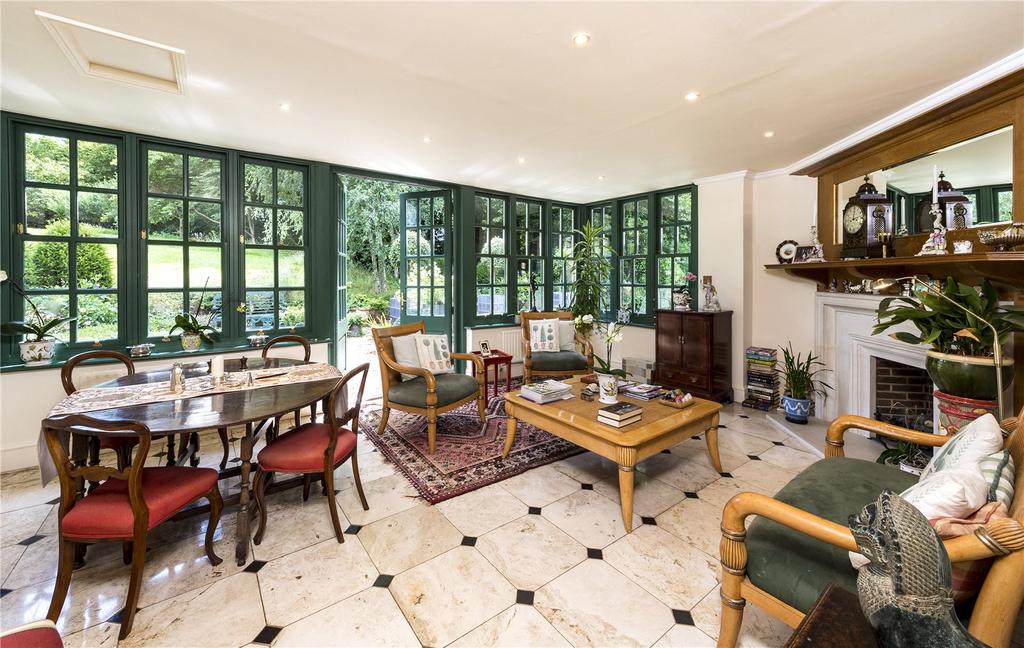 There are four main bedrooms, a dressing room and three bathrooms on the first floor and the attic rooms on the second floor have potential for conversion to five bedrooms or a self-contained three-bedroom flat. 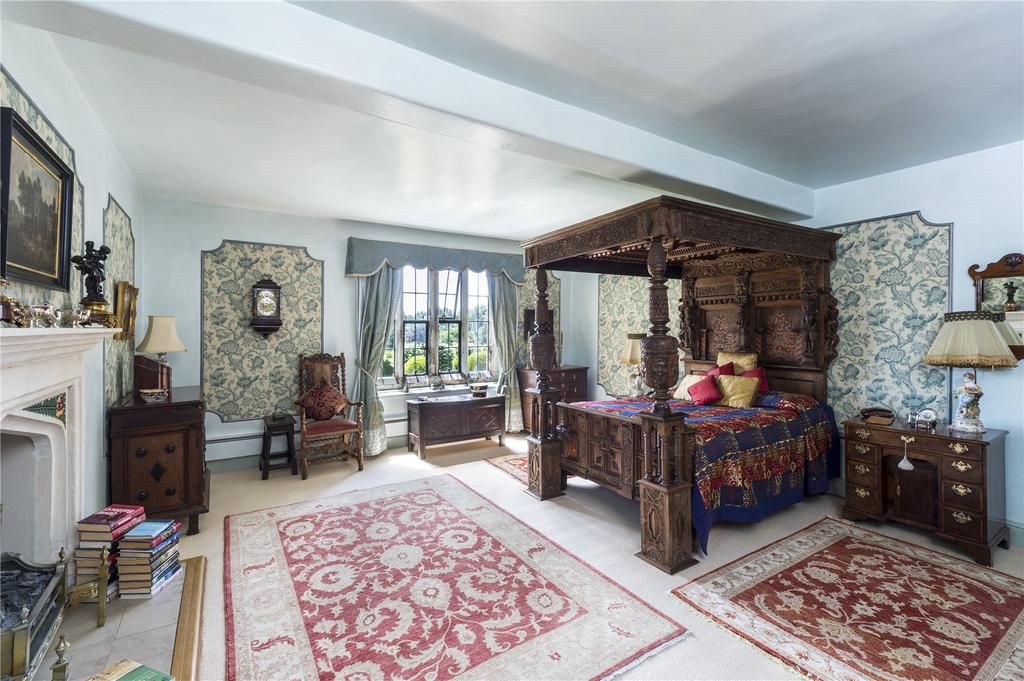 Mrs Holland recalls the enthusiasm with which she and her late husband embarked on the renovation of the house and grounds following their arrival in 1992: ‘First of all, we rebuilt the entire roof, which I’m told is now good for another 100 years.

‘Then, we redid the wiring and redecorated the whole house, especially the Oak Room and the dining room. 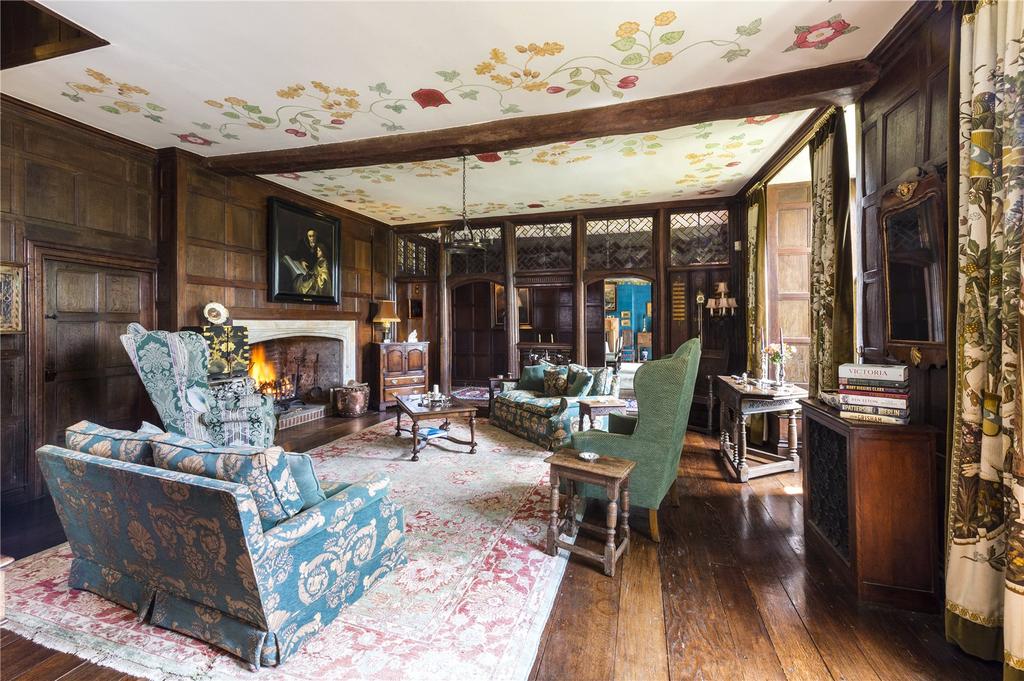 ‘At the same time, we called in garden designer John Brookes, whom we knew well, to redesign the garden with ease of maintenance a priority. As a result, I can manage the garden on my own – something I thoroughly enjoy.’

She continues: ‘I’ve always enjoyed entertaining and the house lends itself equally well to doing that on both a large and a small scale. 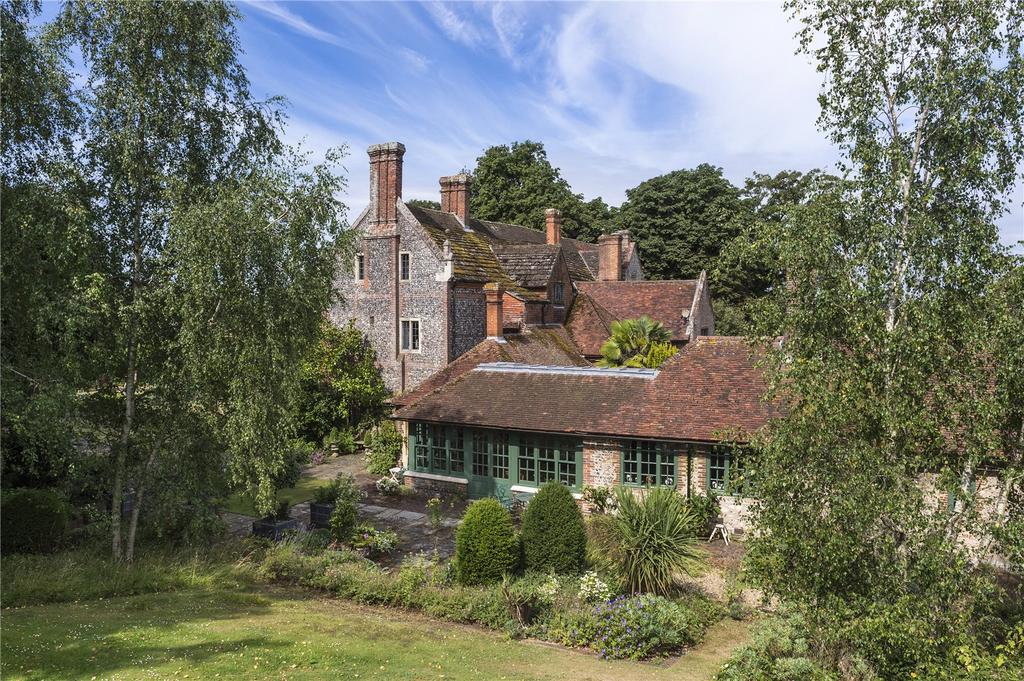 ‘However, in the end, owners of historic houses are only custodians for a time – Ecclesden Manor has been a wonderful family house and it now needs a family again.’

Ecclesden Manor, near the West Sussex village of Angmering, is up for sale via Savills at a guide price of £2.95 million – see more pictures and details. 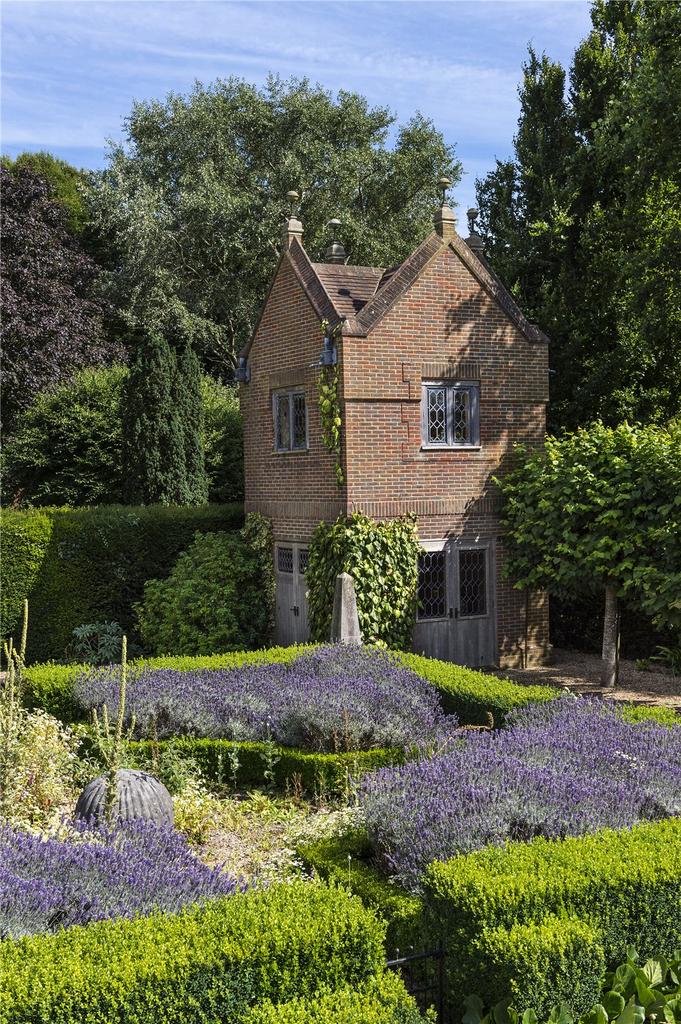