Wilton Castle has been featured in Country Life for it's astonishing mix of architecture, and gardens which rank among the finest in Herefordshire.

Wilton Castle, just outside Ross-on-Wye, is an ancient house looking for a new custodian. It’s a fairytale home for the right person, currently on the market via Jackson Stops and Andrew Grant for £1.495 million – and there’s also a ‘Lord of the Manor’ title for sale along with the property by separate negotiation.

Whoever takes it on will have big shoes to fill, however. The former residents, the Parslows, put in a staggering amount of work to the house and gardens – so much so that Country Life sent Tim Longville along in July 2015 to report back.

Here’s Tim’s feature from back then; to see more about the interior and the house itself, read our previous report about the property.

Remarkable buildings and gardens do sometimes manifest in the oddest of places, but there can be few odder places to find the ruins of a 12th-century Marcher castle and the conjoined ruins of a Tudor manor house, both nowadays enhanced by appropriately atmospheric gardens, than hidden behind the bulk of a white-painted hotel just off a major roundabout.

That, however, is the situation of Wilton Castle, just outside Ross-on-Wye, in Herefordshire, which stands on the west bank of the river and is separated from the town only by regularly flooded water-meadows. 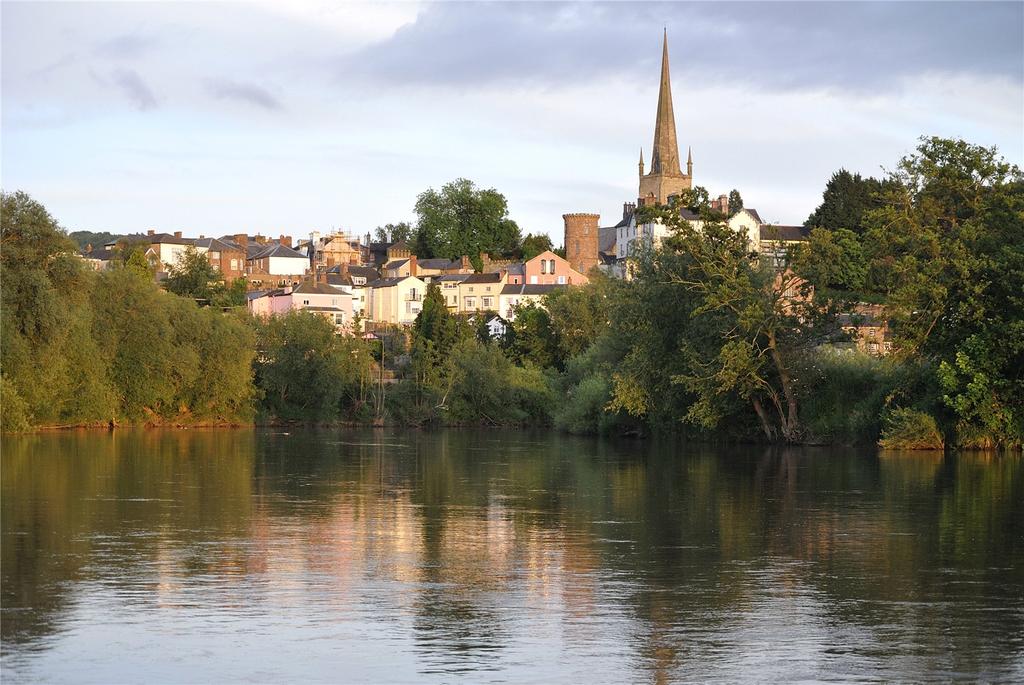 Originally, of course, this was part of a chain of such castles garrisoned by troops defending a border that had long been in dispute with the Welsh and was positioned here both to guard the nearby ford across the river and to protect the traffic along what was then a major thoroughfare.

What remains are five towers, in varying stages of disintegration (the tower to the south-east has disappeared entirely), spaced around an irregular inner courtyard.

The disintegration was caused largely by the fact that, by the 16th century, such castles were becoming obsolete, so at that time, parts of this one were demolished (probably including the south-east tower) in order to provide building material for a more comfortable manor house, which was not free-standing, but built into the remains of the castle.

However, the manor house itself didn’t last long, being ruined during the mid-17th-century Civil War by Royalists infuriated by its then owner’s refusal to commit himself to either side. (In revenge, he declared for the Parliamentarians.)

From the early 18th century, the ruins of castle and manor house were owned for more than 200 years by Guy’s Hospital, which leased the whole miniature estate to a series of tenant-farmers and made the buildings habitable by adding yet another house to this millennium-long complex. This has both Georgian and Victorian elements and shares a wall with the manor house ruins on one side and, on the other, it nestles into the ruins of the castle’s great hall.

Unsurprisingly, by the late 18th century, Wilton Castle had become an essential part of the Picturesque tours of the Wye instigated by the cleric and author William Gilpin. As late as 1832, they were still being described in purely Picturesque terms in the delightfully named periodical The Mirror of Literature, Amusement and Instruction:

‘Here is one of the ivy-mantled relics that lend even a charm to romantic nature on the banks of the Wye. Its shattered tower and crumbling wall combine with her wild luxuriance to form a scene of great picturesque beauty.’

By the time Alan and Sue Parslow were able to acquire these ‘relics’ in 2002, disintegration had gone several stages further. Even with English Heritage’s cooperation and the aid of a matching grant, it was several years before the Parslows could move in. ‘In the beginning, you could actually hear the death-watch beetle munching. And everything was so unsafe we had to wear hard hats all the time.’

Gradually, the ruins have been ‘consolidated’, as the jargon has it, and the north-west tower largely rebuilt. Its crown-style chimney was discovered in the rubble that, in 2002, almost completely filled what, at that stage, remained of the tower’s interior.

The chimney has now been put back into position and the rebuilt tower completed by the addition of a new roof. (The interior of the east tower, incidentally, was, at some stage, probably during the Tudor period, converted into an enormous dovecote, by the addition of an inner wall complete with hundreds of the necessary nesting holes, much of which still survives.)

In garden terms, the Parslows inherited the lawn within the courtyard and the pattern of ancient box hedges around it, but little by way of planting. It was only as the scaffolding on each tower was removed that, section by section, planting was able to follow. The planting style they have adopted is one that Mr Parslow describes as ‘informal within a strong structure’.

His speciality is the hydrangeas and viburnums that fill a shady bed and it’s Mrs Parslow who has developed the garden’s fine range of roses, both shrub roses (particularly in the south-facing border, where apricots, plums, pears, apples and a medlar also flourish) and, above all, the spectacular wild climbers that, suggesting the roses-and-ruins gardens of Ninfa, scramble up every ruined wall and cascade out of every shattered window, whether of the castle’s towers or of the ruined manor house.

Seagull, for example, rises from outside the courtyard – from what was almost certainly the site of the motte-and- bailey castle that preceded the Marcher one – to hurl herself through the window above and tumble towards the tiny beds below (in which flourish Mrs Parslow’s collection of tender salvias, overwintered in the ground, given the exceptionally mild climate here, but sheltered by fleece).

The surviving wall of the stairwell of the manor house provides a suitably sheltered home for a fine specimen of Rosa banksiae Lutea and a Wedding Day rose garlands an ancient yew close to the entrance drive and Mme Alfred Carrière and Mme Grégoire Staechelin cover metal arches across the path leading, past the ruined manor house, to the actual inhabited Georgian and Victorian one.

Any free spaces, Mrs Parslow, a passionate plantswoman, immediately fills with good old-fashioned sturdy perennials, such as echinops, delphiniums, hollyhocks and, above all, a wide variety of hardy geraniums.

The garden has also expanded beyond the ruins and into the moat, now mostly dry, but also regularly flooded (at which point, say the Parslows, you can see precisely why the castle was sited where it was).

Despite the flooding, there are surprising successes here, including a fine specimen of Buddleja alternifolia and Mr Parslow’s collection of kniphofi as, which his wife refuses to allow within the main garden. Another surprising success is the pair of kestrels regularly nesting in a hole in the castle wall high overhead.

The whole of Wilton Castle is historically and atmospherically remarkable, its garden charming and appropriate – and the work that has gone into making it what it is today is exhausting even to contemplate.

This gloriously restored castle in Herefordshire has some wonderful optional extras for the buyer.