Current owner Dr Barnes adopted a policy of ‘care and repair’ when it came to Ashleworth Manor and it shows; now the well-loved family home is looking to start a new chapter.

The historic village of Ashleworth on the banks of the Severn, eight miles from Gloucester and 13 from Cheltenham, is one of very few places in England where the four main buildings of the original medieval manor – the manor house, court house and tithe barn, all 15th century, and the church, part of which is 200 years older – are still intact. All were once owned by the Ashleworth Court estate, which was donated by the Earl of Berkeley to the Abbey of St Augustine at Bristol, now Bristol Cathedral, in the 12th century. 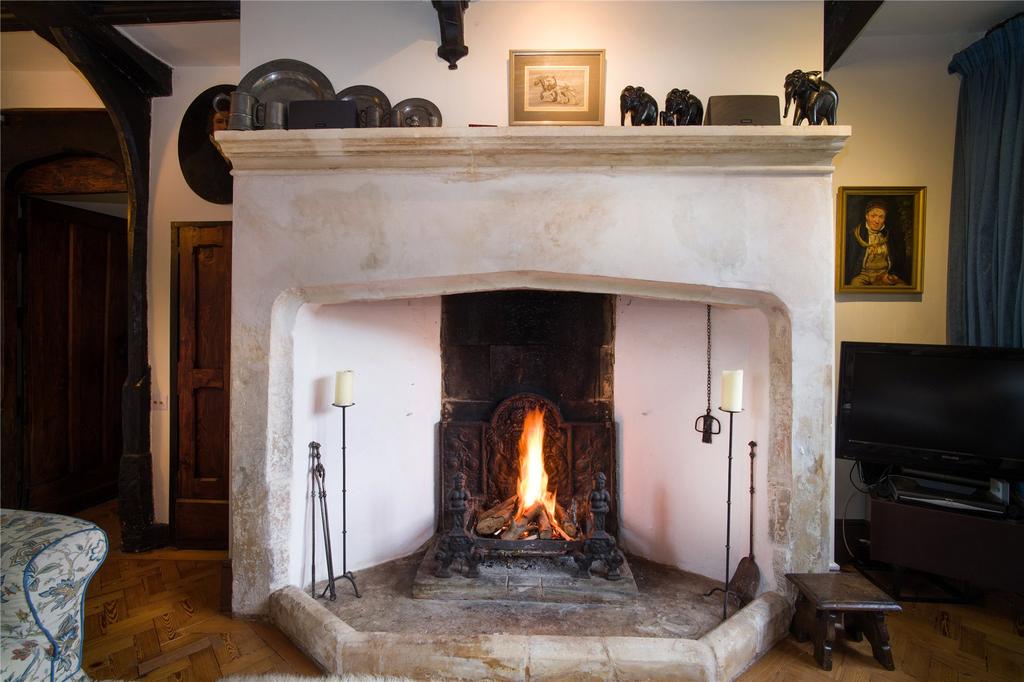 Now, Ashleworth Manor, listed Grade II*, is on the market with Andrew Grant in Worcester and Hamptons International in Cheltenham  at a guide price of £1.5 million. 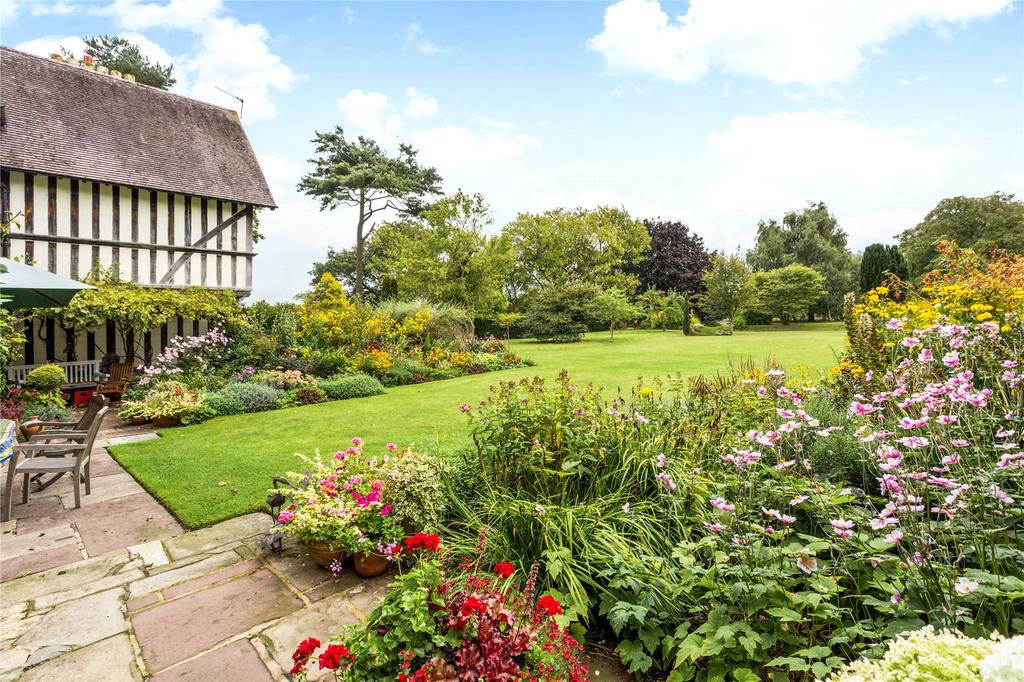 The manor house continued to be owned by the church, with the Lord Bishop of Gloucester as lord of the manor, until 1841, when it was sold for the first time. In 1923, the then owner, a widow, married a priest who was headmaster of The King’s School in Gloucester and, on retirement, served as rector of Ashleworth, so that the manor became once again the vicarage house. The rest of the Ashleworth Court estate, including the magnificent tithe barn (recently restored by the National Trust), was sold after the First World War. 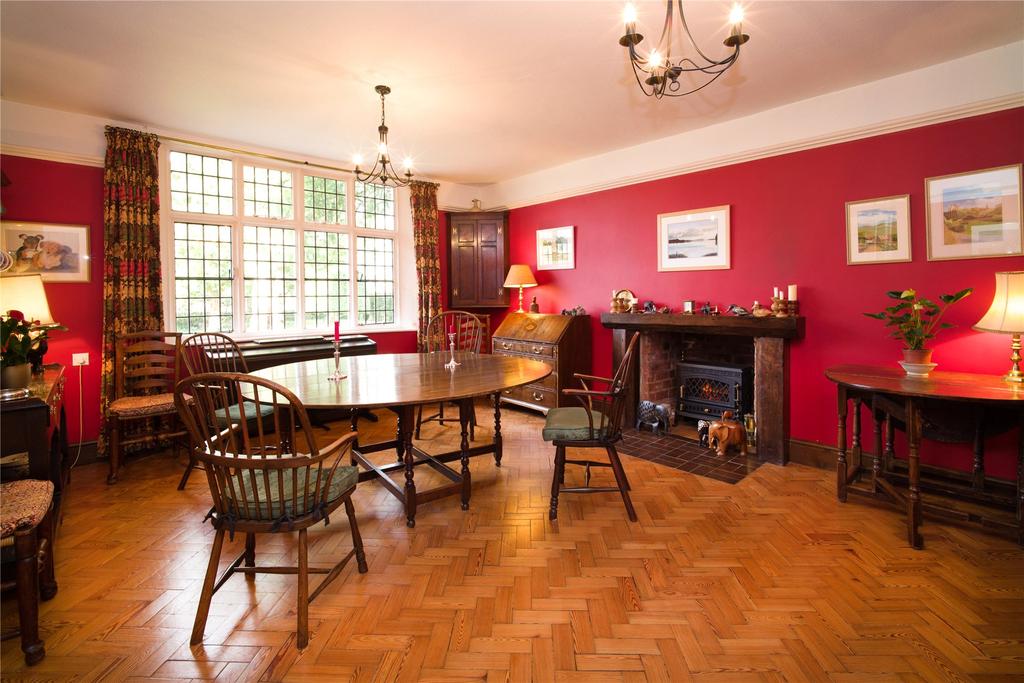 The former medieval settlement is centred on the area around the Quay, where an ancient ferry used to link Ashleworth with Sandhurst village on the east bank of the river until its closure in the 1950s. For centuries, Ashleworth would have been the last place to cross before reaching the outskirts of Tewkesbury, nine miles or so upstream. Meanwhile, the larger, more modern part of the village evolved around the village green, located on higher ground half a mile to the north-west. 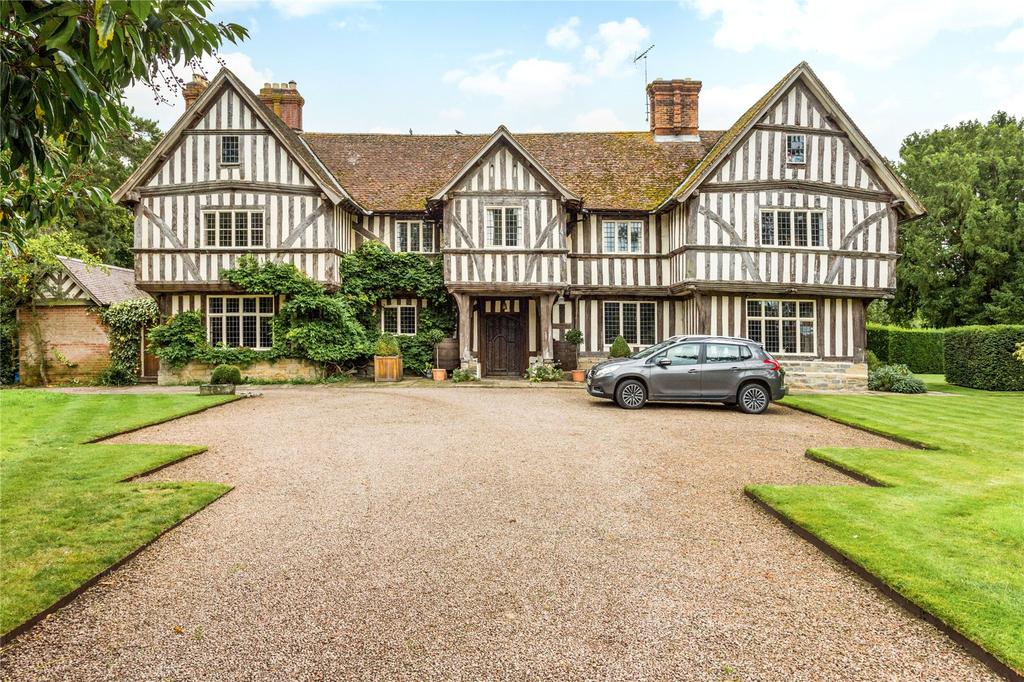 Externally at least, little has changed at Ashleworth Manor since its present owner, Jeremy Barnes, then a young GP, took up residence in 1963, accompanied by his wife, two small children and a puppy. A self-confessed medievalist, three generations of whose family were cathedral architects in Gloucester, Dr Barnes researched the history of every brick and massive oak beam in this remarkable house, as his family grew up enjoying an idyllic Swallows and Amazons existence on the nearby river. 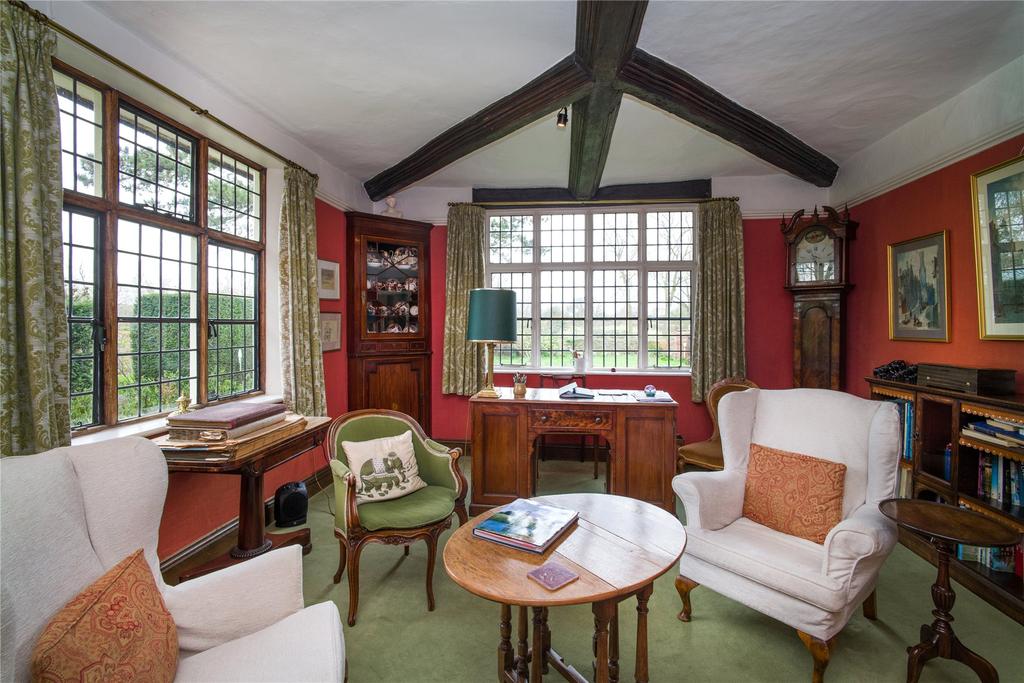 The central section of the manor is thought to have existed in the 15th century as a simple open hall without chimneys or upper floor, with a two-storeyed wing making the original house T-shaped. Later in the 15th century, considerable alterations and additions were made, including the insertion of chimneys, the construction of the porch and probably the adding of the intervening floors above the main hall; these are supported by enormous oak beams, each of which is deeply and expensively carved. As Dr Barnes observes: ‘Only the very rich, such as the princes of the church, could afford the labour costs of such work, which involved carving the design with a hand-held adze.’ 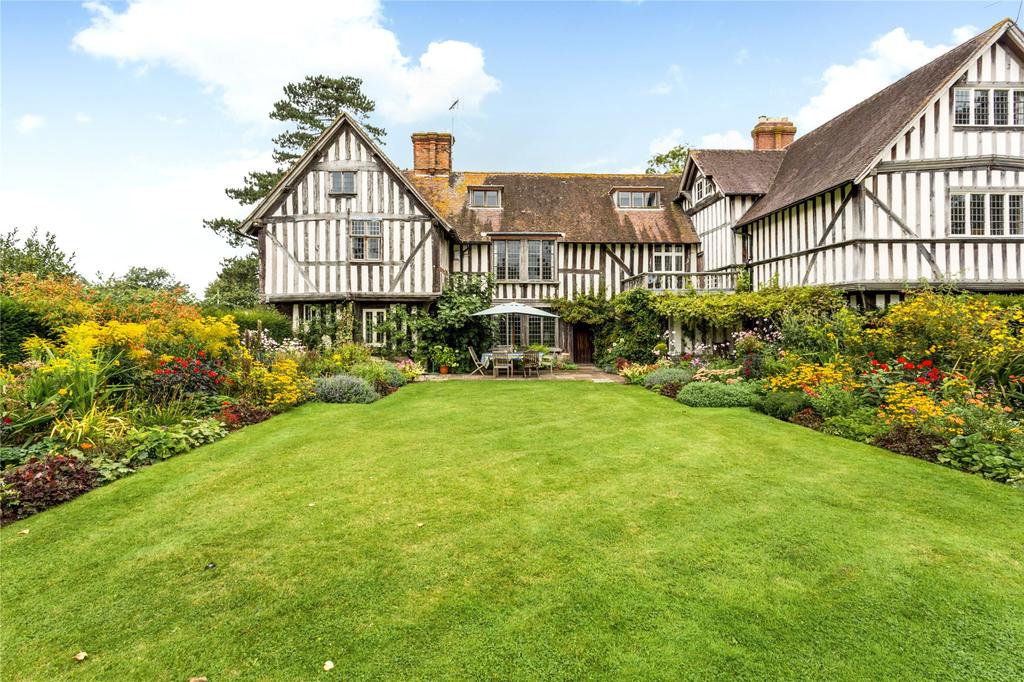 From then on, the manor is said to have been occupied as a summer residence by Abbot Newbury of Bristol and his successors. The house remained unaltered until the late 1800s, when, following its sale by the church, the almost-forgotten Gloucester architect Thomas Fulljames added a timber-framed wing that perfectly matched the H-shaped house. In 1903, another Gloucester architect, W. B. Wood, extended the left wing to the rear and added a low service wing, also to the left. 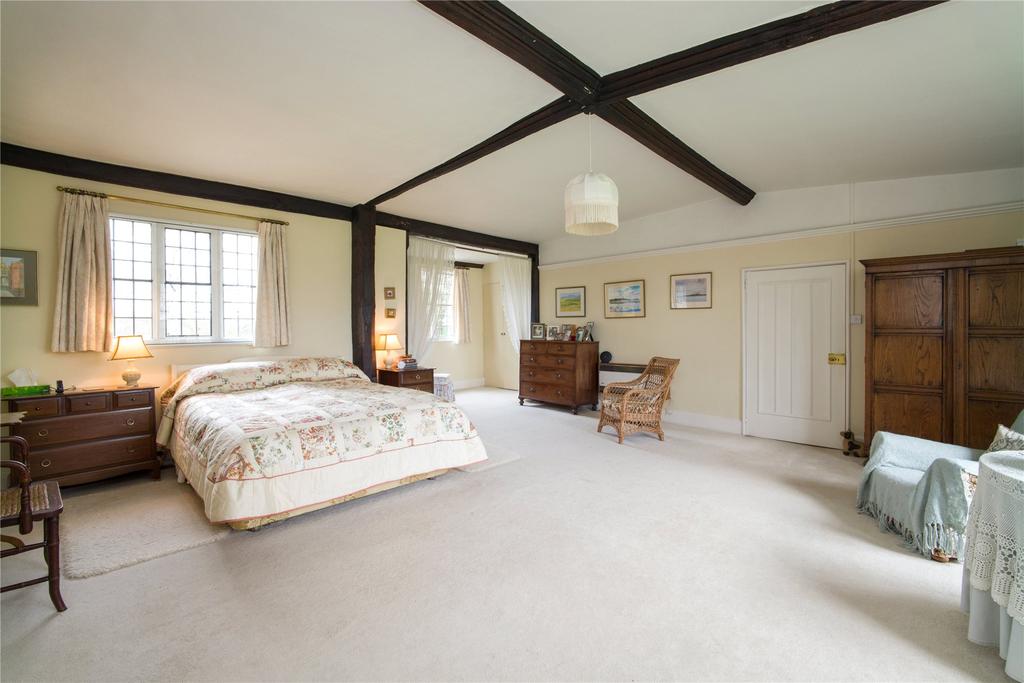 During the family’s 56-year tenure, Dr Barnes largely adopted a policy of ‘care and repair’, the main innovation being the creation of an independent annexe linked to the main house on the ground and second floors. It was occupied by Dr Barnes’s father during his declining years and is now used for holiday lets. 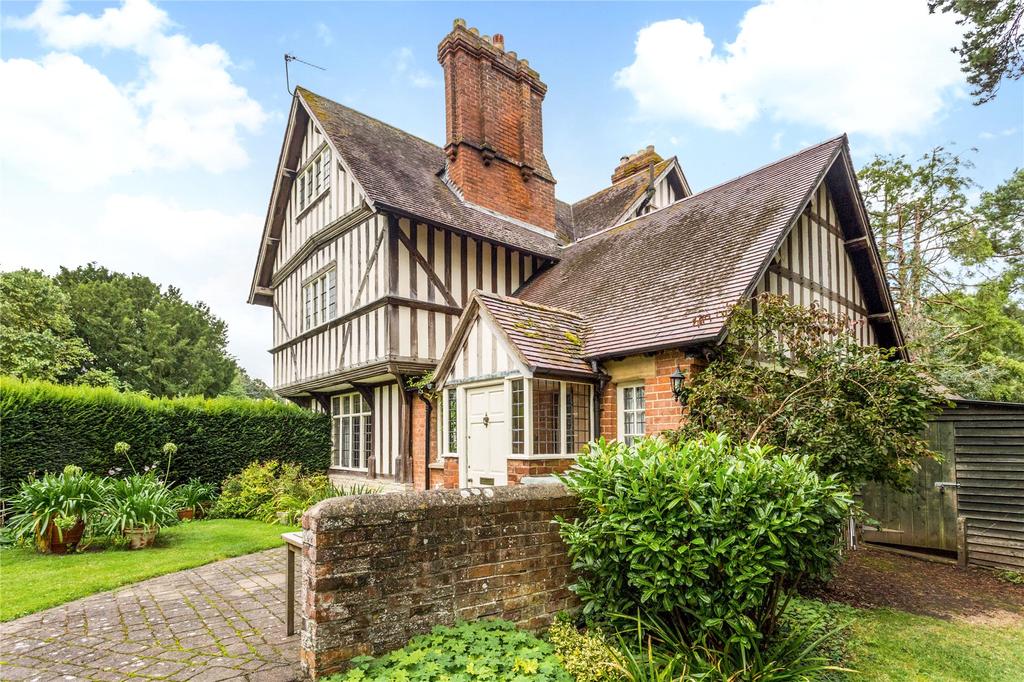 In all, the manor offers some 6,721sq ft of accommodation, including a reception hall/sitting room, a dining room, study, kitchen, five bedrooms, two bathrooms and extensive attics. It stands in beautifully maintained formal gardens, grounds and paddocks, some 10¼ acres in all; out-buildings include stabling, garaging, a studio and workshops. 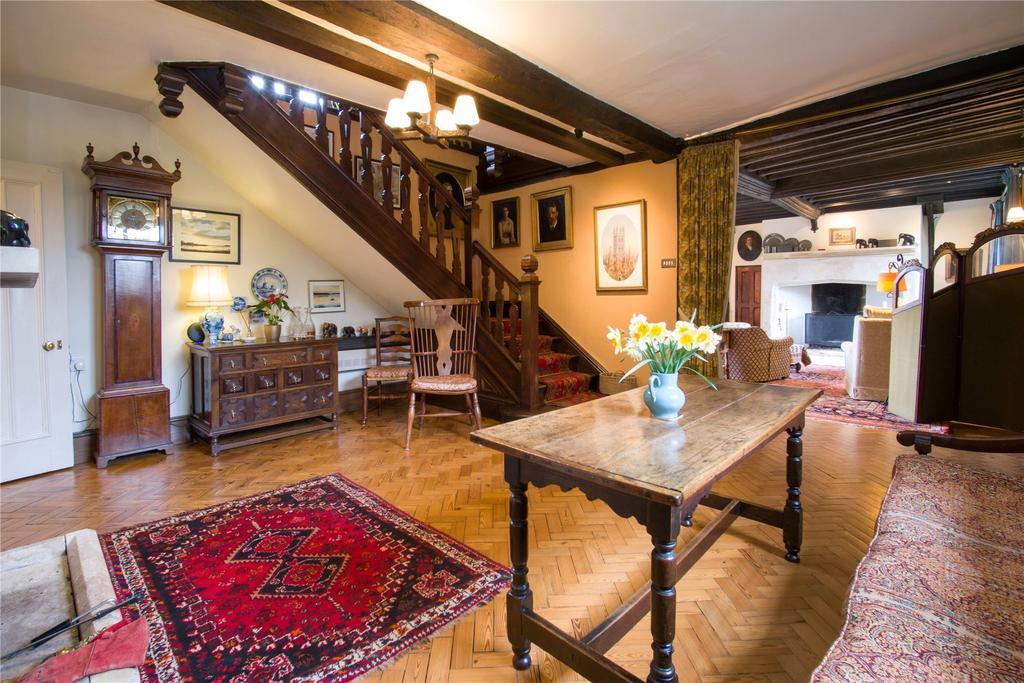 Dr Barnes, who is still active as a writer on the monastic era and as a guide at Gloucester Cathedral, and his wife are preparing to downsize to a smaller house in the nearby village. They will be sad to leave their wonderful home, but ‘hope to leave it in good hands’.

is on the market through at a guide price of £, click here for more information and pictures

Vennwood is a spectacular residential estate in need of a little TLC.