Ripple Court, a Georgian masterpiece reputedly built by the great Sir John Soane, has come to the market near Deal, in Kent — but buyers will have to go in with eyes open, says Penny Churchill.

Described as ‘a sleeping beauty’ by selling agent Simon Backhouse, of Strutt & Parker in Canterbury, Grade II*-listed Ripple Court, three miles from the quaint coastal town of Deal, is rightly regarded as one of east Kent’s most important country houses.

Owned by the same family for the past 60 years and ‘now in need of sensitive updating’, it stands in 8.6 acres of wonderfully private gardens and grounds, screened on three sides by a shelter-belt of mature woodland. The agents quote a guide price of £2.75 million.

Built between 1796 and 1802 on the site of an earlier, 16th-century Ripple Court for Col John Baker Sladen, the classic late-Georgian house was reputedly designed by Sir John Soane. 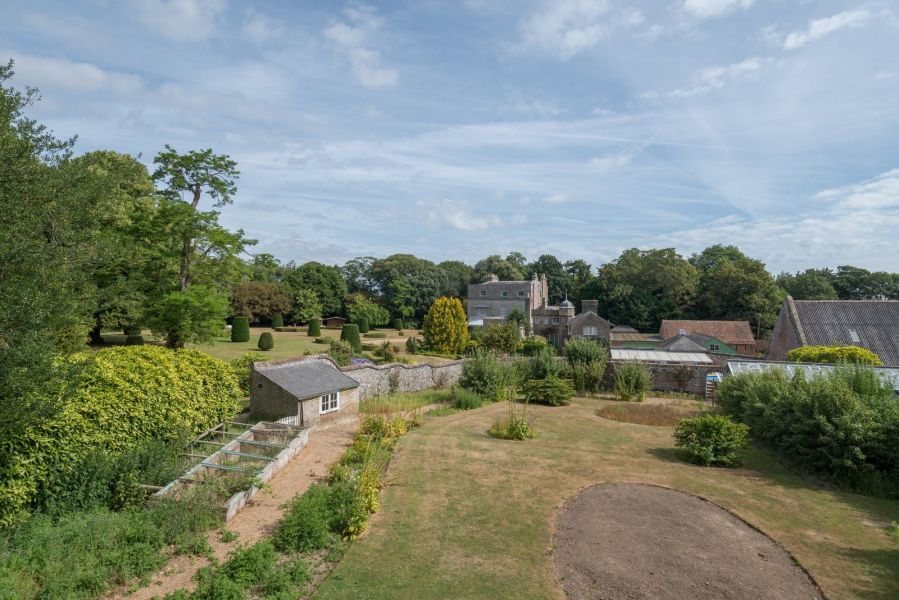 Although no paper trail exists to this effect, its Historic England listing highlights the front façade and many details of the house and plan as being ‘reminiscent of Sir John Soane, normally the least copied of Neo-Classical architects’. Mr Backhouse also points to the distinctive central chimney-stack as being ‘typically Soane’.

Unusually for this part of Kent, the house is built of white brick with ashlar and Coade stone dressings, the focal point of its elegant front façade a pedimented doorcase framed by tall sash windows.

In 1887, it was extended to the rear by the pioneering Scottish Arts-and-Crafts architect James MacLaren, who added secondary accommodation, garaging and an octagonal tower with a domed roof.

In about 1930, the verandah that originally ran down the entire side of the house was replaced by the single-storey, bow-fronted drawing room, which has three tall windows overlooking the gardens.

Included in the sale are the 17th-century, four-bedroom Old Farm House, listed Grade II, and two sets of listed outbuildings, including a magnificent, 130ft-long Kentish barn with potential for conversion.

Ripple Court is for sale via Strutt & Parker at £2.75m — see more details and pictures.

Living beside the water — whether that's the sea, river or lake — is a dream for many of us already. And

2 St. Margaret’s Place offers a wonderful opportunity to own a house right in the centre of King's Lynn –

Pitzhanger was 'so invested with deep personal significance' for Sir John Soane that 'in one lecture to the Royal Academy, he actually described its façade as a self-portrait.' Credit: Will Pryce/Country Life Picture Library

Following a boldly conceived restoration, the interest and quality of Sir John Soane’s Pitzhanger Manor in Ealing villa shines out

Sir John Soane despaired of his children to such an extent that he left his worldly goods to the nation,