Elegant Slape Manor at Netherbury in west Dorset comes with four cottages – including the delightful and famous River Cottage.

Dreamy Slape Manor is set in 83 acres of gardens, woodland, parkland and pasture in its own quiet valley near Netherbury, between Beaminster and Bridport in the glorious West Dorset AONB.

Launched on the market in Country Life at a guide price of £7 million through Savills, this historic, 17th-century manor, listed Grade II*, seems to hug the sheltered contours of the valley traversed by the River Brit, which meanders along the boundary and through the grounds of the estate.

Slape Manor comes with four cottages, including the delightful River Cottage made famous by chef Hugh Fearnley-Whittingstall, who rented it from the owners before going on to buy his own farm in the area. 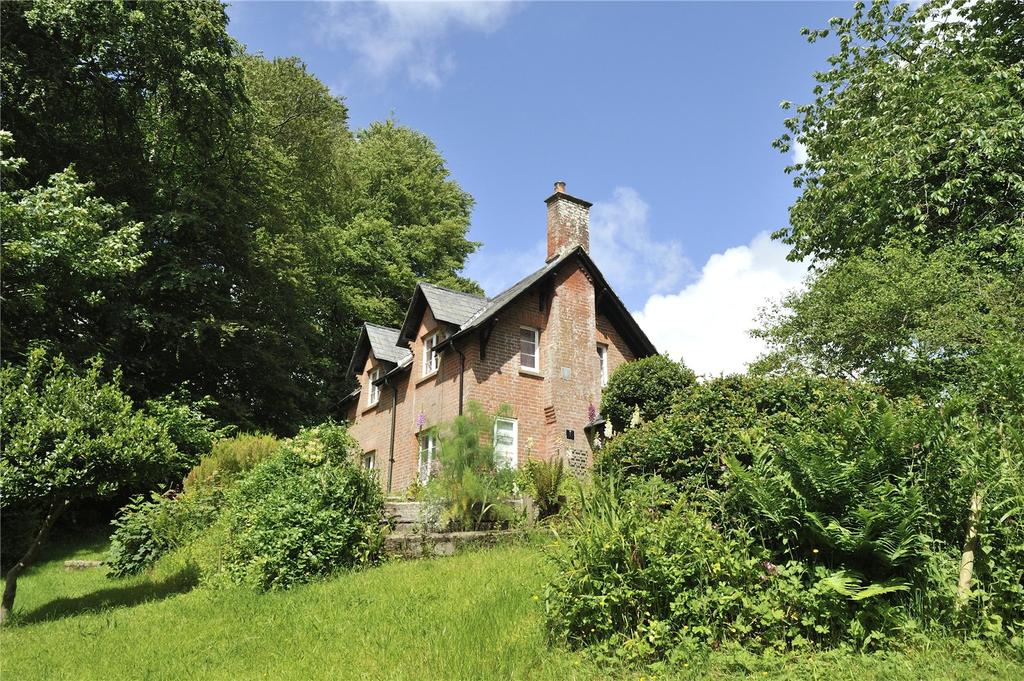 The first three series of his television show were made at the property, starting in 1998, and painting a rosy picture of life in the countryside that inspired thousands of people to follow suit and move to the West Country.

As charming as the cottage is, the main house is the centrepiece of this property. Originally built in about 1600 as an ecclesiastical courthouse by the hierarchy of Salisbury Cathedral, the imposing mellow-stone edifice was converted to private use as a dower house by the Strode family of nearby Parnham House in the early 18th century.

In 1870, the manor was sold into private ownership by the Diocese of Salisbury, although the cathedral still retains a stall for the Canon of Slape. 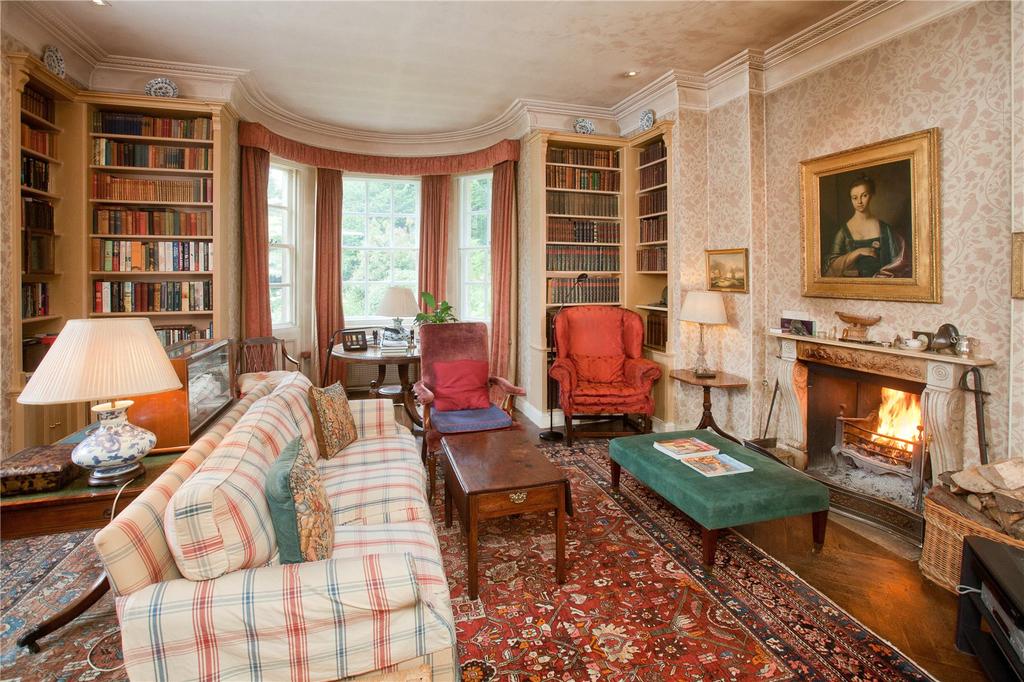 The new owner of Slape Manor was Mrs Wood (née Gundry), the daughter of one of Bridport’s most prominent families, whose interests included rope-making and brewing.

In 1871–2, she had a number of improvements made to the house by the Dorset architect G. R. Crickmay – including a library and a coach house designed in conjunction with Thomas Hardy, who subsequently abandoned his career as an architect for life as a full-time writer. Slape’s now famous gardens were laid out at about the same time. 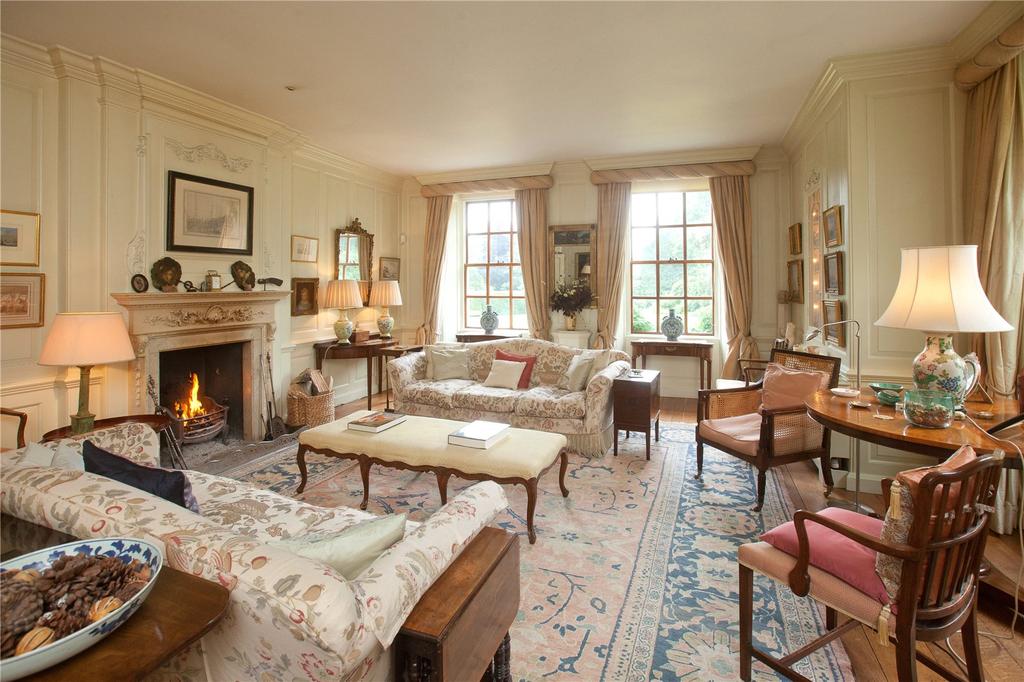 In 1919, the manor was bought by a Maj Ronald, who kept a pack of hounds that later became part of the local Seavington Hunt.

Presumably, it was he who, in the 1930s, had the entire manor restored by the Bristol-born architect and archaeologist Edward Prioleau Warren, at which point, the east wing was added. 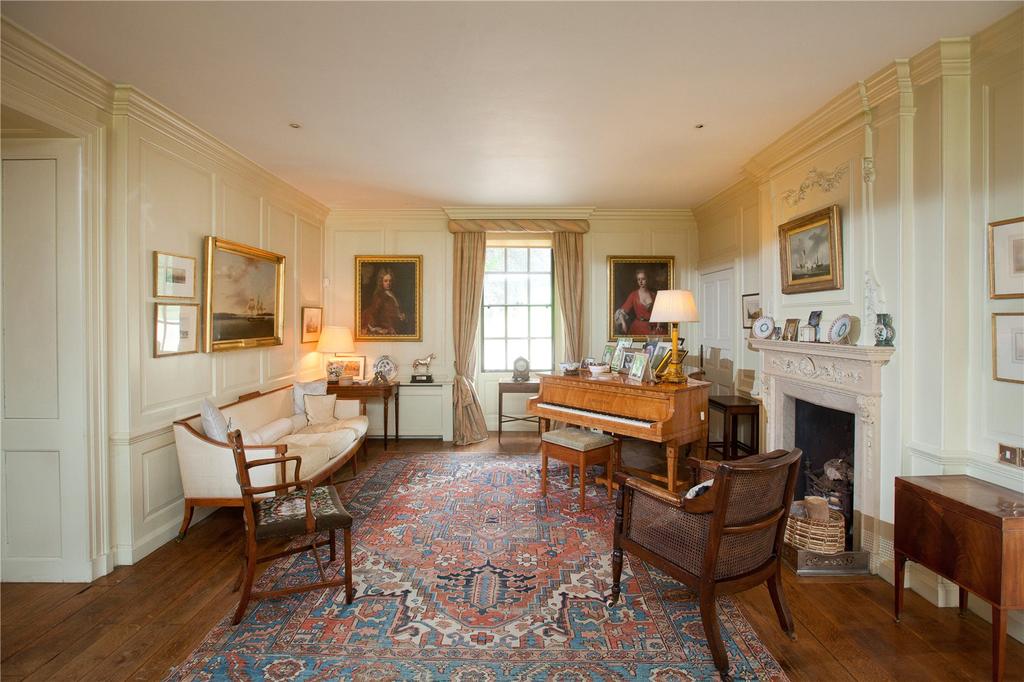 Whoever chose the site for the original courthouse was clearly divinely inspired as the sheltered valley protects the gardens from the worst of the prevailing winds and ensures the early flowering of many plants and shrubs.

For Mr Holborow, one of the manor’s most intriguing aspects is the fact that visitors arriving at the front door are unaware of the splendid formal gardens laid out at the rear, which include an extensive terrace, sweeping lawns and well-stocked flowerbeds and borders. 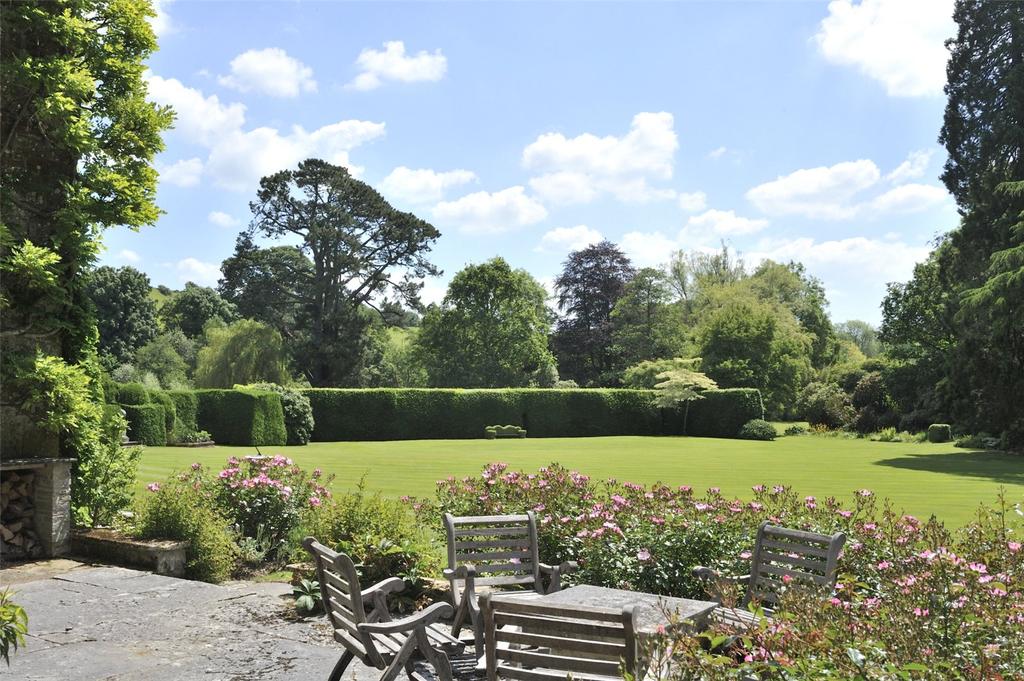 Slape’s present owners, Mr and Mrs Antony Hichens, who bought the manor in 1988, have undertaken extensive planting of camellias, rhododendrons and azaleas, all of which produce a magnificent display in the spring and early summer; thanks to the warm location, some varieties have even been known to flower from October onwards.

Other highlights include a striking white wisteria, several large magnolias and an enchanting Italianate garden with a sunken lily pond enclosed by yew and beech hedging. 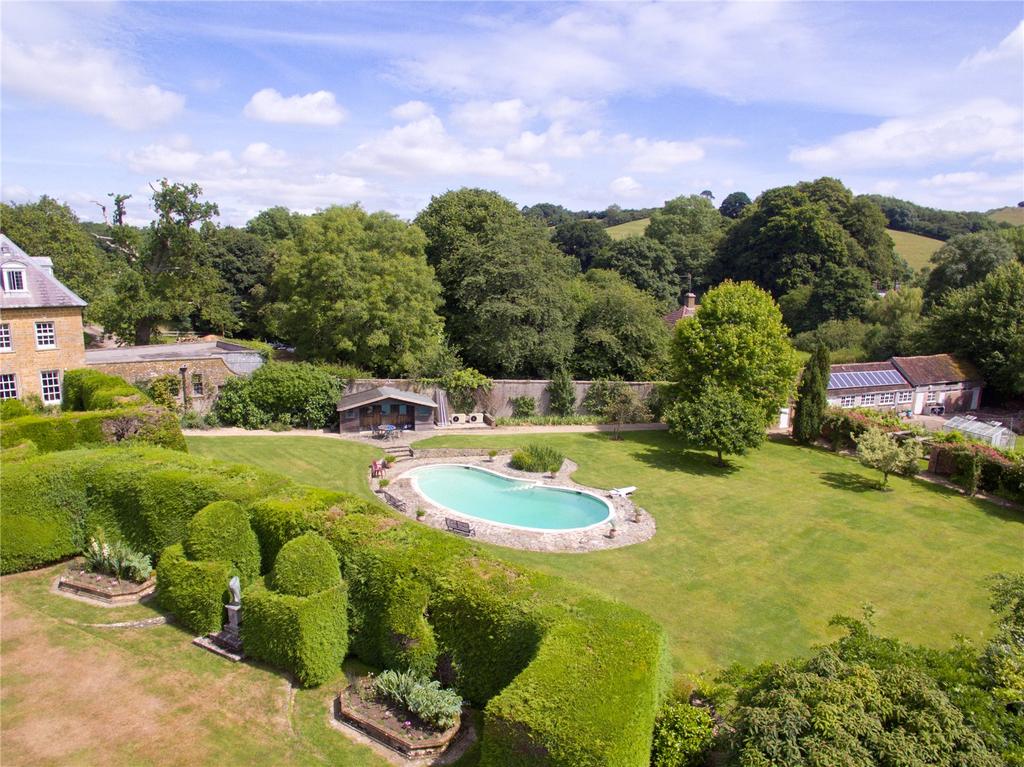 The eye is also drawn to a stream lined with banks of hostas, gunneras and cryptomeria and throughout the grounds are scattered a variety of mature specimen trees, including wellingtonias, cedars, beeches, willows and Monterey pines. Beyond the gardens, the grounds open onto a charming lake surrounded by trees, meadows and areas of woodland. 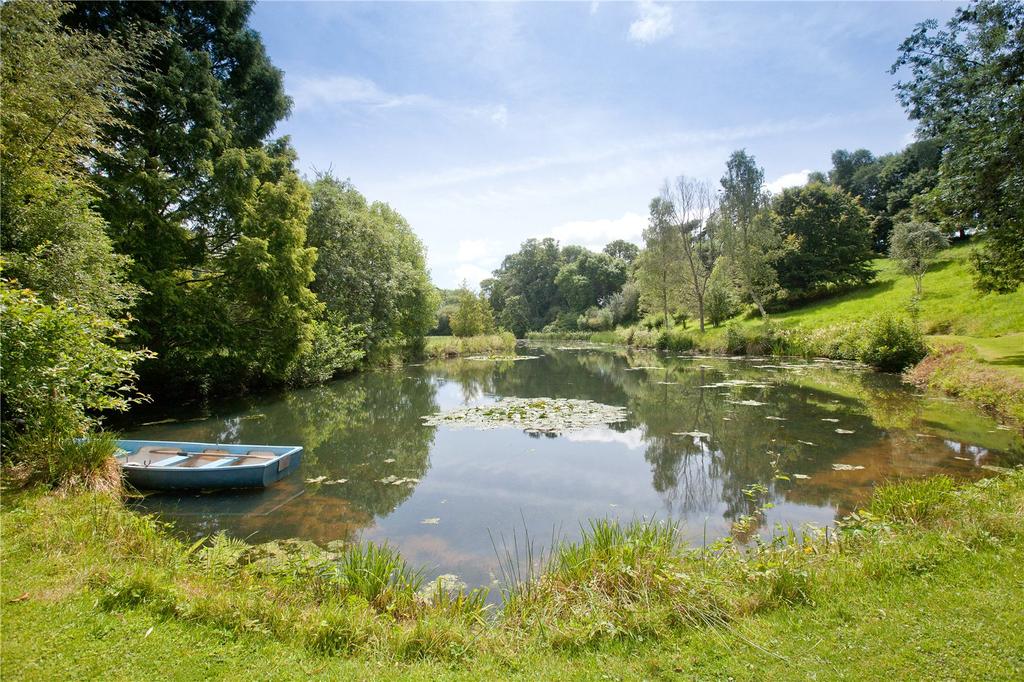 The reception rooms have high ceilings, elegant windows and working period fireplaces; the ornate panelled drawing room and the library, which have retained their original oak flooring and are connected by double doors, enjoy a triple aspect overlooking both the front drive and the gardens. 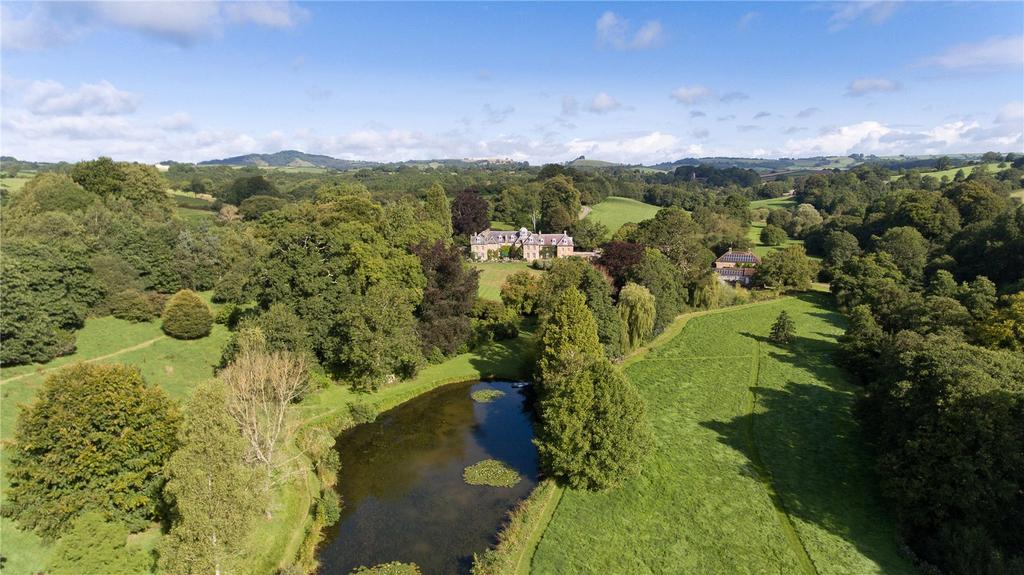 Other ancillary buildings include the stables, built in the same warm-coloured stone as the house: these consist of four traditional loose boxes with cobbled flooring and a tack room with its original saddle racks. 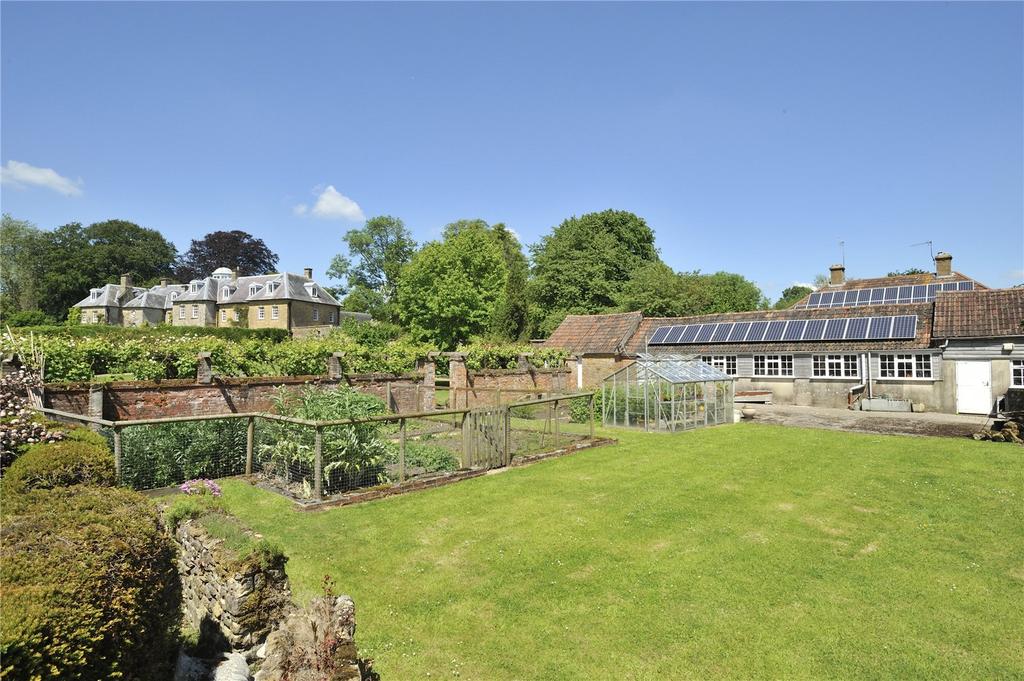 Slape Manor is on the market with Savills at a guide price of £7m – see more pictures and details.

Travel writer, Bill Bryson recorded his time working at this sanatorium as an NHS employee in the 1970s in his