From priest holes to gargoyles, Nicola Venning explores how unusual period features, if well-curated, can be the making of a property.

The knotty, beamed ceilings, flagstone floors and crooked staircases of a rambling period home can be both characterful and attractive, but how do you rub along with the more unusual aspects of period charm? Priest holes, over-large fireplaces and even chapels may be colourful, but they can be hard to incorporate into day-to-day living.

‘If handled correctly, the strangest of features can be beautifully adapted,’ explains Richard Freshwater, director at Cheffins estate agency in Cambridge. He cites examples such as ‘murals that have been carefully preserved and used as part of the whole interior-design scheme’ and ‘large inglenook fireplaces used as seating areas in what would otherwise be dead space’.

Priest holes crop up surprisingly often and many owners struggle to use them effectively – after all, they were meant to remain hidden, but they do tell an interesting story. Mr Freshwater has seen them successfully turned into areas for wine storage and used as a discreet home for a safe.

The priest hole in The Chestnuts, a Grade II-listed home in Warboys, near Huntingdon, Cambridgeshire, which dates back to 1666, was enlarged to form a second staircase. It now provides convenient access from the master bedroom to the attic above. The seven-bedroom house was on the market earlier this year.

Other older features that have been adapted to contemporary living include a bear pit in a garden in Somerset that was reimagined as a grotto or cavern for parties.

It’s the home of British fashion designer Alice Temperley and, with eight bedrooms and 5½ acres, it’s on the market with Savills at £2 million.

More common oddities across the UK include indoor wells that have been covered and used as kitchen tables and chapels turned into spacious billiard rooms or casual dining rooms (particularly useful after muddy shoots). In fact, adapting an entire room isn’t unusual. The redevelopment of the turn-of-the-century Westfield College campus in north London, now called Hampstead Manor, has breathed new life into the Grade II-listed galleried reading room, now a reception/kitchen room with wood-panelled walls and polished parquet flooring, as well as mezzanine bookshelves and a walkway.

The building’s scholarly features create an exceptional area within the four-bedroom home. Named Skeel Library after the original, it’s on the market for £7.95 million and is part of 125 one- to four-bedroom properties within Hampstead Manor (www.hampsteadmanor.com). Prices start from £747,500 and the first homes will be ready later this year. 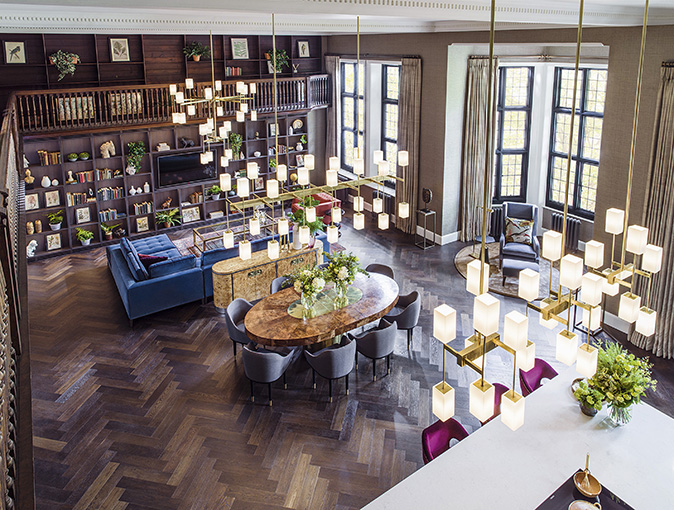 Adapting historic features is easiest when an entire building is being redeveloped, such as at St Thomas, a converted church in Winchester. A two-bedroom apartment (one of nine within the building) makes the most of the building’s height and, in so doing, incorporates soaring Gothic stone columns, arches and vaulted ceilings.

Memorial plaques, carvings and even gargoyles and grotesques have been retained. ‘It’s just wonderful and there’s no way you can replicate that,’ says Chris Gooch, partner with Carter Jonas, with whom the flat is on the market at £850,000.

Of course, not everything can be adapted successfully. A sweeping staircase that once had airy stairwells on the first or second floors, allowing light into a hallway, is likely to be filled in to create features such as bathrooms – wholly necessary, although they may ‘detract from the feel of the house,’ comments Gideon Sumption, director of Stacks Property Finders in Devon and Somerset.

The main value in adapting period features into the modern fabric of a home is not so much in their tangible worth as their curiosity value. Something that raises a buyer’s interest, says Mr Sumption, ‘encourages them to emotionally connect to a property’ – valuable, indeed.