The impressive Newhouse Estate, with its Grade I-listed house, dates back to the 1600s and comes complete with 906 acres.

Strutt & Parker’s Salisbury office has launched onto the market via Country Life the historic, 906-acre Newhouse Estate, which occupies a gloriously private setting overlooking its park and ancient woodland in the north-east corner of the New Forest National Park, near the village of Redlynch, and as grand a house for sale in Wiltshire as you could hope to find.

The agents are looking for ‘offers in excess of £18 million’ for the Newhouse estate with its striking, Grade I-listed main house, built in the early 1600s by William Stockman and sold by him in about 1620 to Sir Edward Gorges, later Baron Gorges.

In 1633, Lord Gorges sold the estate to Giles Eyre of nearby Brickworth House, Whiteparish, whose descendants have remained at Newhouse to this day. It’s the first time the estate has been for sale in almost 400 years.

The house stands on high, dry land at the top of a steep rise with falling ground to the south where, in the early 18th century, some 70 acres of landscaped park was laid out.

Newhouse has undergone many changes over the years. In 1742, the north wing was extended when a dining room of one lofty storey was added. In about 1760, a drawing room of comparable size was added to the south wing to complete the symmetry of the west front. 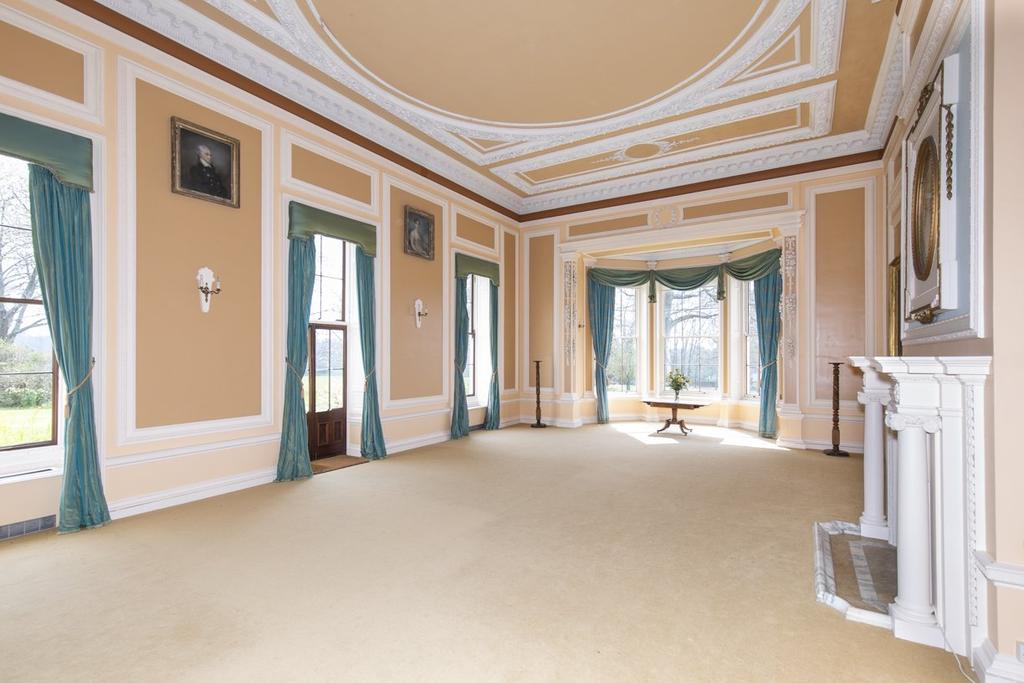 A large Victorian kitchen and service quarters were added on the north-east side in 1879, and, in about 1907, the drawing room was redecorated in the early Georgian style by Maple & Co.

In the early 1970s, the 19th-century additions, by then riddled with dry rot, were removed, thereby restoring the house to its 18th-century shape and configuration. Further renovation of the house, the adjacent stable courtyard and the gardens was carried out in the 1990s by George Eyre Jeffreys and his wife, June.

Although in need of updating, the timeless main house offers well-maintained family accommodation including an impressive panelled entrance hall, four grand reception rooms and an old-fashioned country kitchen on the ground floor, the principal bedroom suite, two further bedrooms and a bathroom on the first floor, and a further four bedrooms and a bathroom on the second floor. The property has stabling, outbuildings, a farmhouse, cottages and buildings let for both commercial and agricultural uses.

In the early 16th century, the Stockman family settled at Downton, Wiltshire, where, in the 1560s, William’s father, John, acquired a number of properties, including the Bishop of Winchester’s local estates. Following John’s death in 1605, William inherited the family estates, which made him a landowner of considerable substance. By 1619, he had built Newhouse to an unusual Y-shaped plan, possibly designed by the little-known architect, John Thorpe, who oversaw the rebuilding of Longford Castle, near Salisbury, as a triangular Swedish pattern castle for Lord Gorges’s father, Sir Thomas Gorges.

Giles Eyre left Newhouse to his second son, Ambrose, whose son, William, sold it to his cousin, Sir Samuel Eyre, a successful lawyer and judge, in 1660. After Sir Samuel’s son, Sir Robert, the estate passed to his cousin, Samuel Eyre, MP for Salisbury, on whose death, in 1794, Newhouse passed to Samuel’s daughter, Susannah, and later, as part of her marriage settlement, to her husband, William Purvis, a distinguished naval officer who took the name of Eyre.

In about 1816, the estate of Standlynch, near Salisbury, was bought for William, Earl Nelson, and renamed Trafalgar in memory of his brother, Horatio Nelson, who died there aboard his flagship in 1805. It was there, in 1817, that George Nelson Matcham, Admiral Lord Nelson’s nephew, met and married William and Susannah’s daughter and heiress, Harriet Eyre.

Matcham was succeeded at Newhouse by his son, another William, a Wiltshire magistrate who changed the family surname to Eyre-Matcham, then by his grandson and, finally, by his great-great grandson, John St Leger Eyre-Matcham, who died without issue in 1975. The estate then passed to John’s sister, Constance Valentine Eyre-Matcham, who married Cdr Edmund Valentine Jeffreys RN, in 1923. Their son, George William Eyre Jeffreys, who inherited on his mother’s death, died at Newhouse, aged 88, in July 2019 — hence the sale of the estate for the first time since 1660.

The exemplary restoration of this magnificent house has reintegrated a complex building into a single and coherent modern home, as