A mansion in Dumbartonshire has come up for sale that features stained glass windows, intricate plasterwork and sweeping staircases that makes the place look like it's been borrowed from a Hollywood film.

Dalmoak Castle isn’t especially old, nor is it especially large — by castle standards — or historic. It’s not located on a spectacular bluff, wasn’t a former refuge of Bonnie Prince Charlie, and Robbie Burns never wooed one of the parlour maids. And yet its as fascinating a place as we’ve seen for a while.

This Category A-Listed house dates to 1866, though is built on the site of much older homes. Apparently there’s been a dwelling here since the Middle Ages, and Robert the Bruce once owned the land as a hunting ground. Dalmoak as it stands today, however, is the brainchild of architect Alexander Watt, who created it for a man named John Aiken. Aiken’s son, James, also added many touches, and his initials appear here and there on keystones. 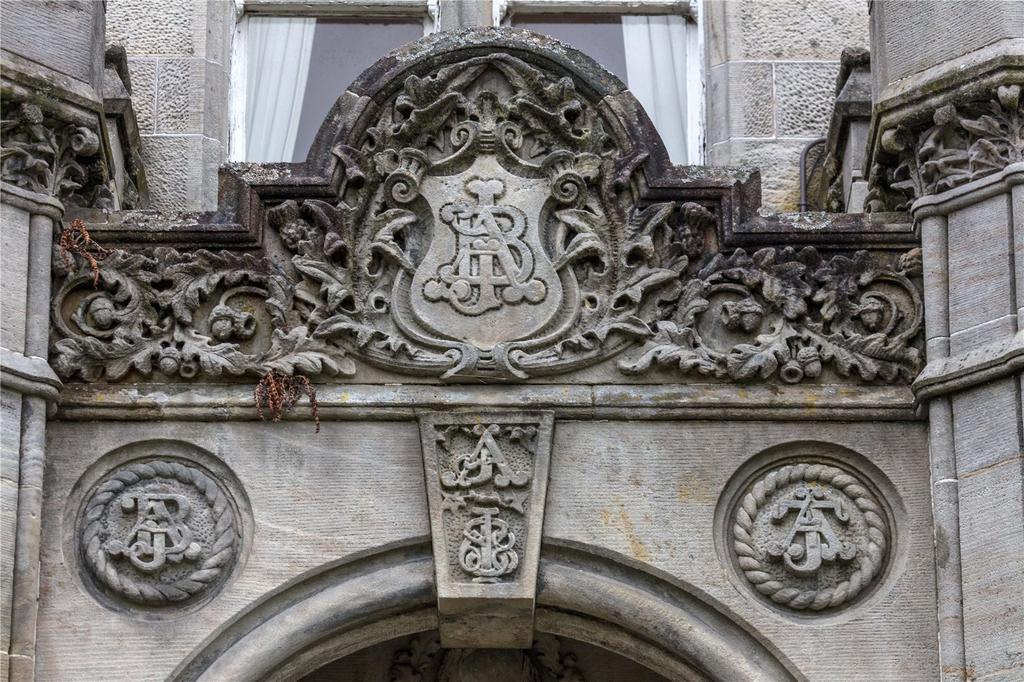 From the outside, it’s an eyecatching place that looks like the sort of thing Walter Scott would have approved of, with castellations, a tower, a grand entrance portico and a huge drawing room with columns and ornate ceiling. 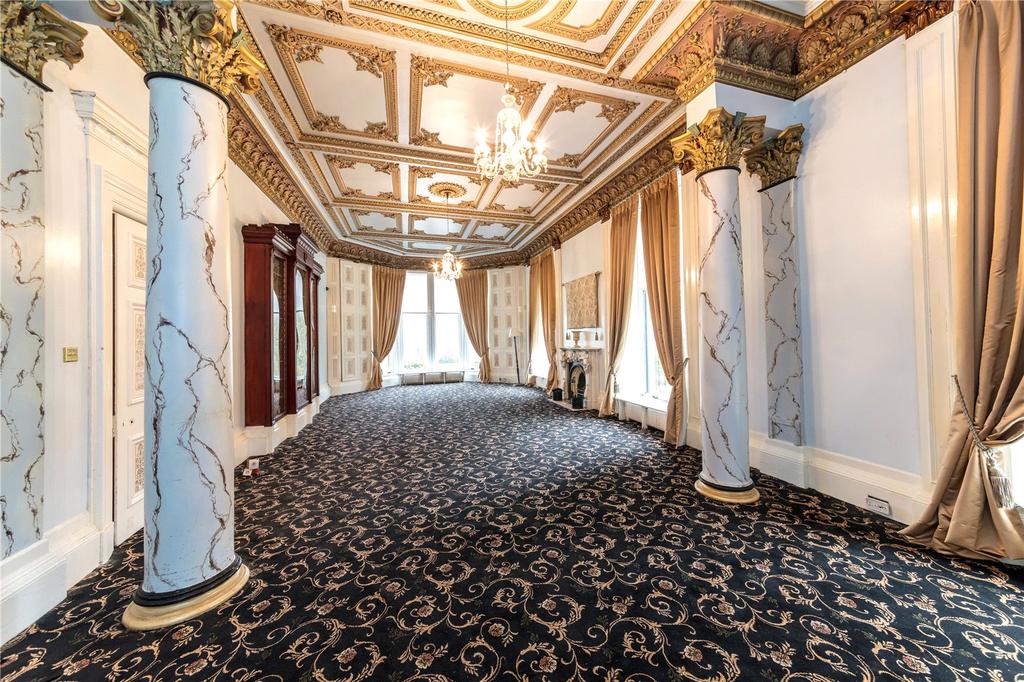 It’s inside that the place really grabs the attention, however. The selling agents, Savills, describe it as a ‘sumptuous interior’ which ‘includes a tripartite etched glass vestibule door, magnificent scagliola Corinthian columns, hardwood imperial staircase and three beautiful round arched stained glass windows on the landing depicting Celtic mythological scenes.’ 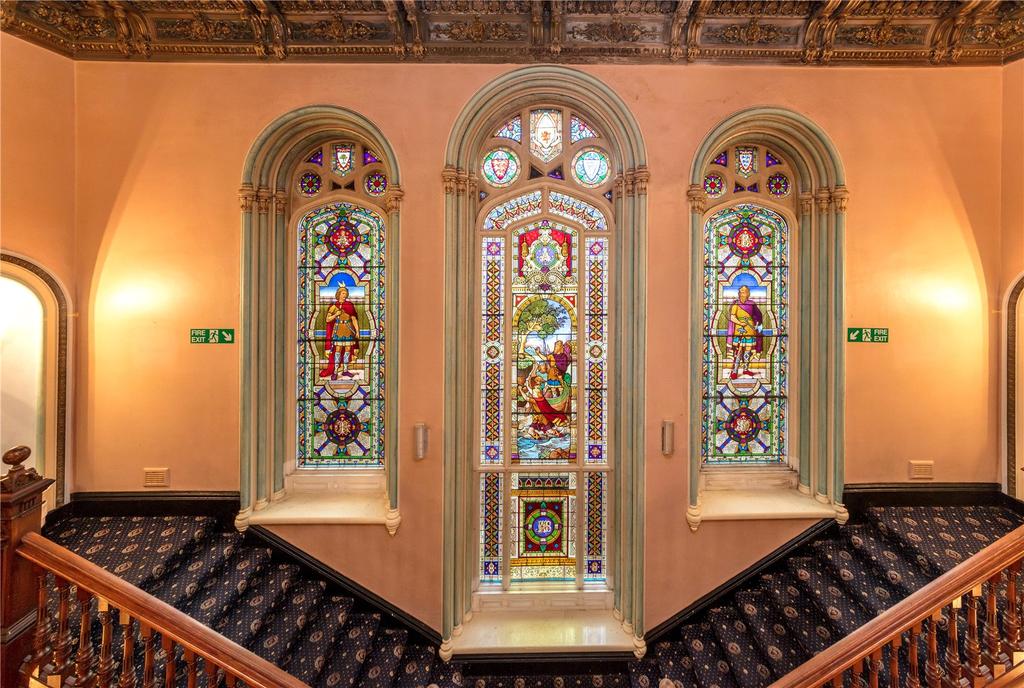 Those stained glass scenes were produced by two of Glasgow’s most famous Victorian glaziers, William and James Kier, who made and installed windows for some of Scotland’s finest buildings. Among the places their work can be seen is Glasgow cathedral, where their father, David, was the master glazier.  Their work at Dalmoak is extraordinary, and the agents suggest that they ‘may be the largest stained glass windows in a private house in the United Kingdom.’ 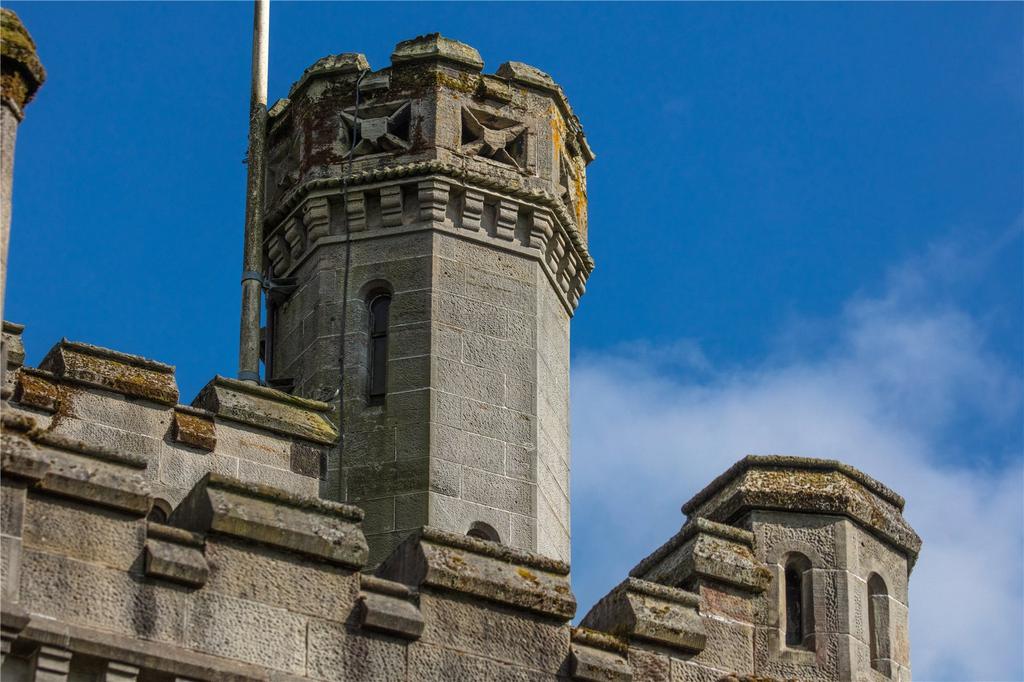 Aside from the glass, this 9,500 sq ft house has a wonderful grand hallway with imperial staircase,  14 bedrooms — many of which are en-suite — adrawing room, study, music room, formal dining room and a basement with wine cellar. 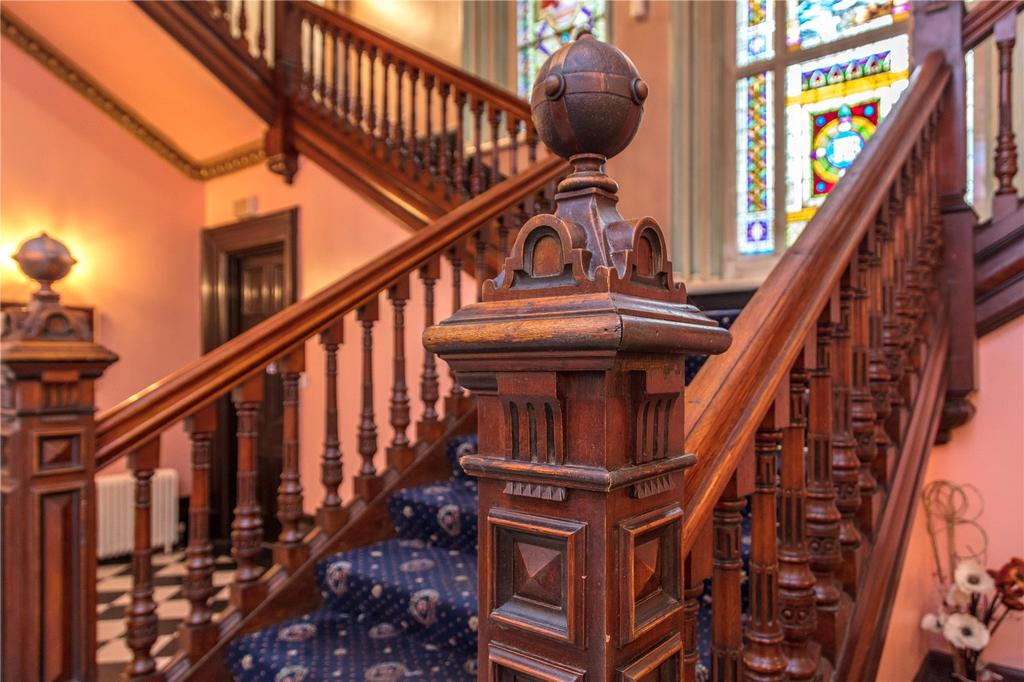 The eye-catching tower is also worth a mention: stairs go up to the top where there is an accessible roof terrace from which you can look out over the gardens and across towards the River Leven, which runs down to the Firth of Clyde. 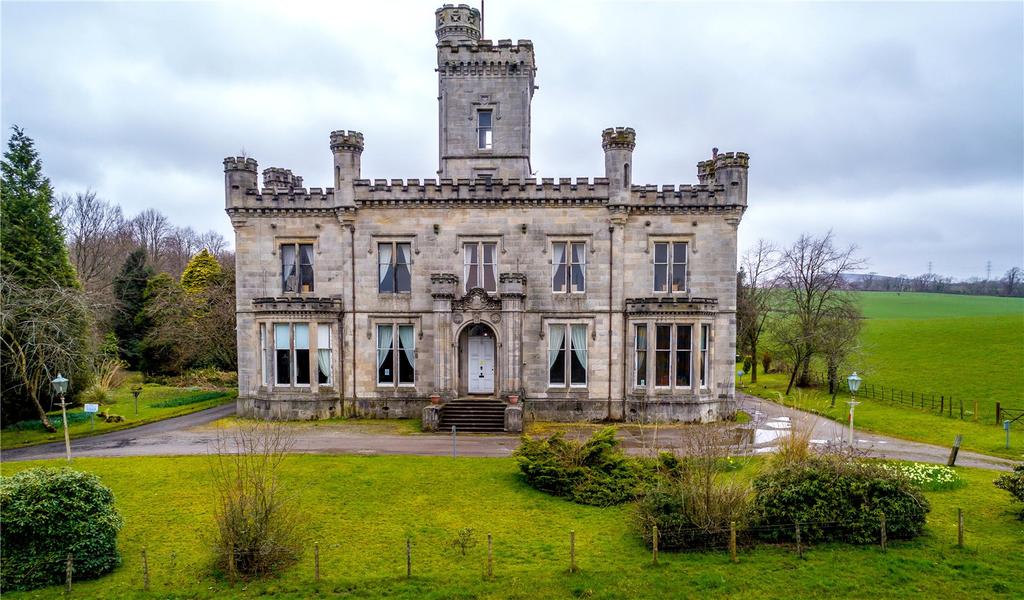 The house has seen ups and downs in its history. It was used by the RAF in the Second World War, became a nursing home in the 1980s and, while it has been restored, still retains its commercial use status — as you might guess from the rather incongruous ‘fire exit’ signs you might spot in the pictures. 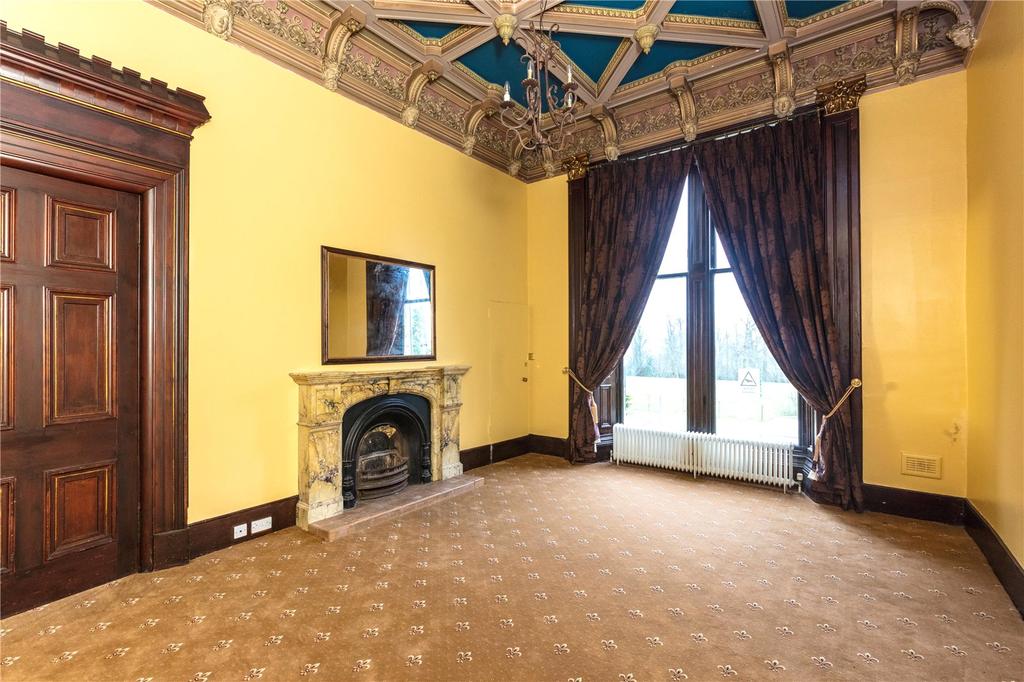 There is a little work to be done here and there, but budget shouldn’t be a problem: rather incredibly, the price for this house, 20 minutes from Glasgow Airport, is listed at offers over £675,000. That’s roughly what you’ll pay for a swish flat in Glasgow’s West End; quite an opportunity for the right buyer.

Dalmoak Castle is for sale via Savills at £675,000 — see more details and pictures. 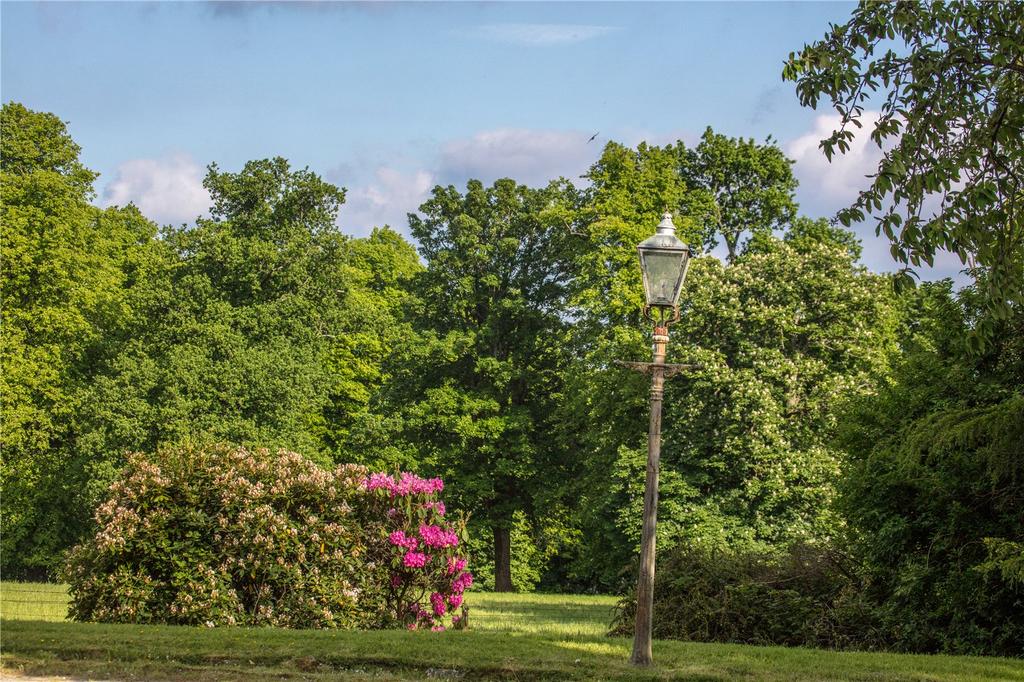