Island life without needing a ferry? Tidal islands can offer the romance and glamour of living on a charming dot on the map but without many of the problems, as Eleanor Doughty explains.

For several hours every day, the Holy Island of Lindisfarne, off the Northumberland coast, is completely inaccessible. The tide comes in and, just like that, all access is gone. Bad luck if you are mid crossing.

This is what makes tidal-island life lovely, says Jim Tierney, who moved to Lindisfarne in 2014 to run the Impressions of Holy Island gallery.

‘Holy Island is a beautiful village,’ he explains. ‘We have three pubs and two hotels. We used to have a shop, but it’s closed now — although we do have a post office.’

There’s no dentist, doctor, police or even a fish-and-chip shop. For supplies, islanders must drive 13 miles to Berwick-upon-Tweed. However, there is plenty to see and drink, not least the local mead and Lutyens’s Lindisfarne Castle, once owned by Edward Hudson, founder of Country Life.

Mr Tierney is very happy with his lot. ‘By the time the gallery is closed, the tide is in. It can be two or three weeks before I get off.’ To avoid ‘going stir crazy’, he sometimes heads to the mainland ‘just for a drive — it resets your brain’.

Property stock is limited — at the time of writing, only two places were for sale on Holy Island: a three-bedroom terrace for £365,000 and a two-bedroom townhouse for £380,000. By comparison, the average house price for nearby Berwick is £176,498, where three-bedroom terraces can start at £110,000. 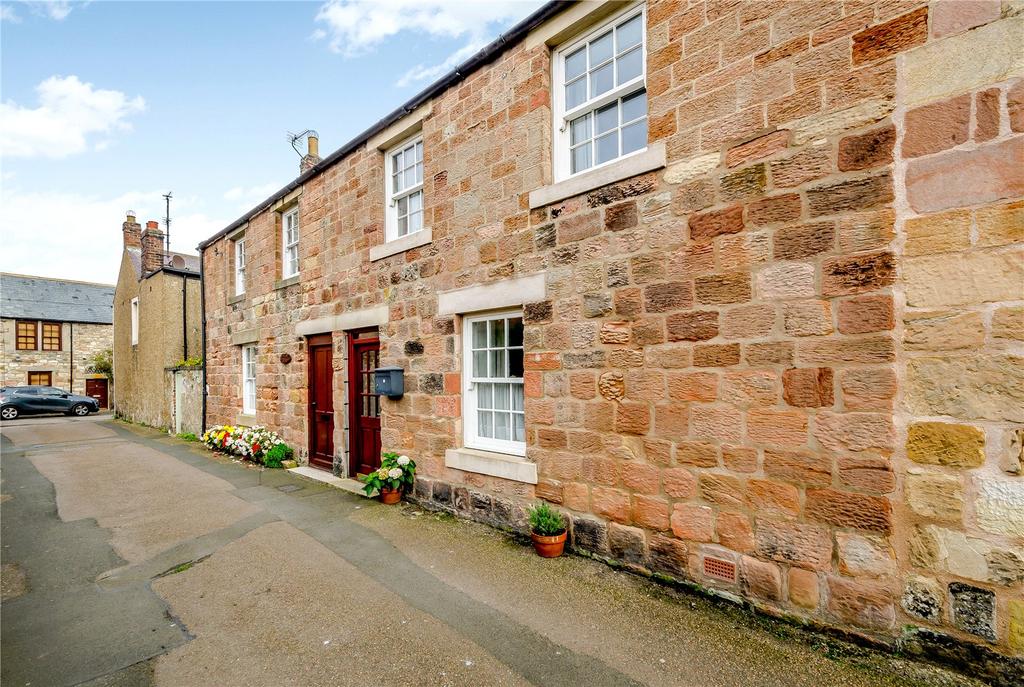 This house on Holy Island is for sale via Rettie at £365k.

This is supply and demand, says Amy Brown of local agents Rettie, the agents selling the aforementioned three-bedroom house. ‘Few properties come up, so people pay a premium. The area has always had its own micro-climate for property. It’s a good place to put your money; in terms of safeguarding your investment, it’s as good as you’re going to get.’

Another keen tidal islander, Stacey Belbin runs Lady Grace, a 21ft tour boat on the Blackwater estuary in Essex. When she does come ashore, she lives with her husband Scott on Mersea Island, the seven- mile-square tidal island nine miles from Colchester.

‘Mersea is the centre of the universe,’ she jokes. ‘An escape.’

It’s also a haven for wildlife, Mrs Belbin explains. ‘Our coastline attracts 300,000 migratory birds from Scandinavia. The large number of oysters we have in the river means the water is so clean it attracts phyto-plankton, so the mud flats are filled with food for birds in winter.’

Bigger creatures can occasionally be spotted. ‘In 2014, we saw a pod of 50 pilot whales in the river. You never know what you’re going to spot.’

In terms of the property you can spot, there’s a lot more choice than on Holy Island — but prices this close to London are steeper. A four-bedroom chalet with huge garden, an Aga in the kitchen and a music room with space for a grand piano is currently for sale at £725,000. 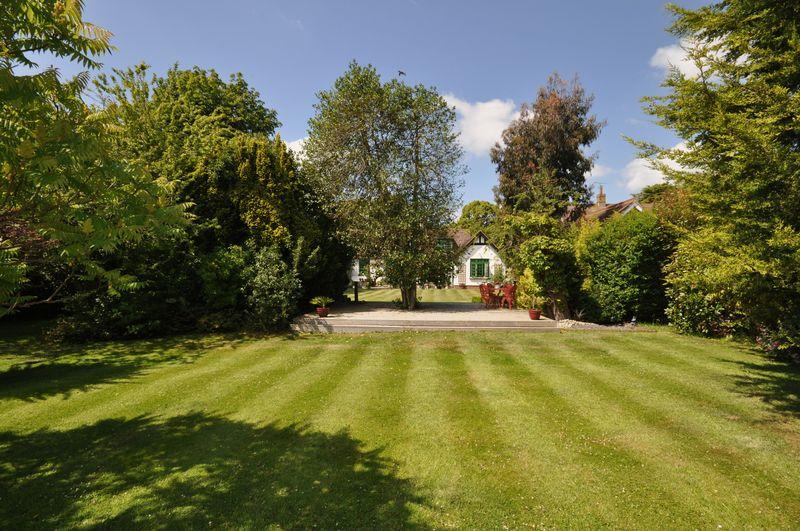 Mersea Island is commutable to London, and there are striking homes for sale — including this fine chalet with a huge garden and plenty of space, via Blackwater Estates.

Around the bay from Mersea is privately-owned Osea Island, where Mark Lawson, partner of Knight Frank’s The Buying Solution spent summers as a child. ‘We used to jump in canoes and paddle around it. It was a real Swallows and Amazons experience,’ he says.

In south Devon, Burgh Island, some 800ft from the village of Bigbury-on-Sea, is home to only a few properties, one of them Burgh Island Hotel. The island is the inspiration for the settings of two Agatha Christie novels.

Such islands are homes of necessary enterprise, says Richard Addington, director of Jackson Stops’s Exeter office. ‘Tidal-island communities often come up with creative ways to combat the restraints that the tide brings. Burgh Island, for example, has the use of a sea tractor, which is the only one of its kind in the world and transports visitors to and from the island when the tides are in.’

On Jersey, the amphibious ‘duck boat’ offers a similar service, transporting visitors from the mainland to Elizabeth Castle, German forces’ HQ during the Second World War. Around the coast, the picturesque La Corbière lighthouse is also only accessible between the tides; when the tide is out, charming rock pools form around the base. A four-bedroom home with a stunning sun deck overlooking the scene is for sale through Savills at £2.95m. 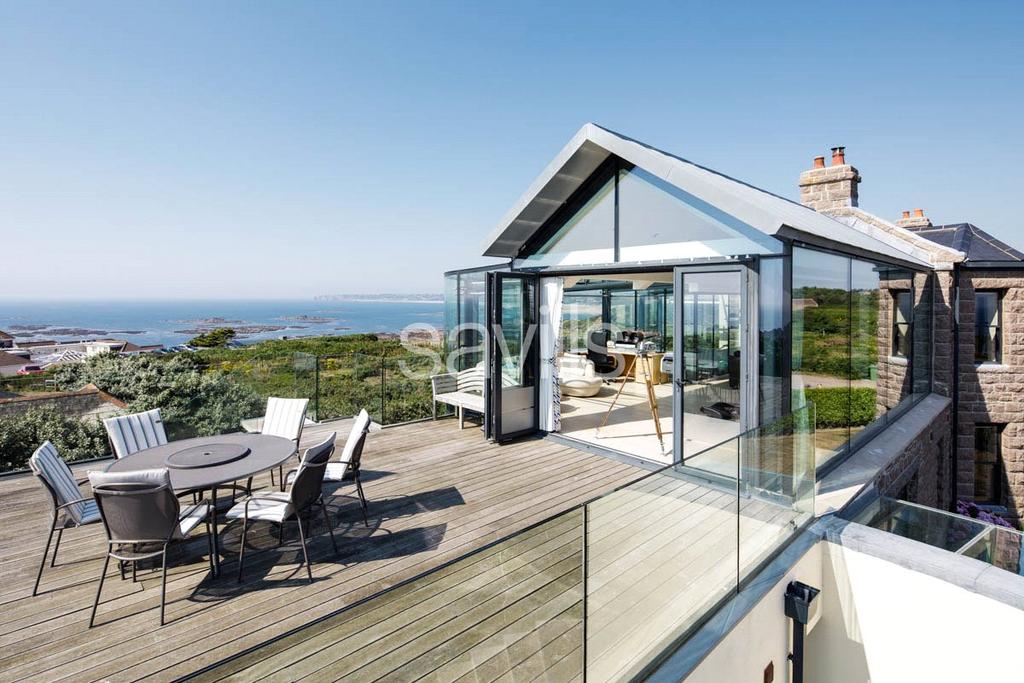 When we dream of a house in Jersey, this is the sort of thing we have in mind. Beautiful.

Eel Pie Island is a five-minute walk from Twickenham and has a vibrant musical history; in the 1960s, the Rolling Stones played regularly on it. House prices, as with other tidal islands, vary. ‘We’ve sold converted boathouse homes there for £2 million and, more recently, a plot on which an architect is building her own home for £500,000,’ says Soren Ravaux of Waterview estate agents.

House values for tidal islands come with conditions, says Mr Lawson. ‘If you find the right person who wants to live on an island, they might pay a little bit more, but I think most people would expect a bit of a reduction because they can only get to their house depending on the tides.’

Properties to the market are rare on Eel Pie Island, where the pedestrian-only access is ‘not for the faint-hearted,’ Mr Ravaux explains. ‘It’s lovely in the summer, but on a cold, windy day when you’ve left something in the car, it can test the patience.’ However, there are clearly those that love it: ‘Our average river seller has been in situ for 18 years, so you can wait a long time,’ says Mr Lawson.

This beautiful image features on the cover of English House Style by John Goodall. Credit: Rizzoli

To coincide with the publication of his new book illustrated from the archives of Country Life, 'English House Style', John

A good village shop is the heart and soul of the community — does your local make our list?