The Old Hall in Saxlingham Nethergate sits in 16 picturesque acres of grounds and gardens, just a few miles from Norwich. Penny Churchill takes a look.

The persistent shortage of new country houses for sale in the Eastern counties was alleviated to some extent by the launch onto the market over Easter of an interesting mix of fine country properties in Norfolk and Suffolk, at prices ranging from £1.5 million to £3.75m. And among those is The Old Hall, right in the heart of Norfolk.

Ben Rivett of Savills in Norwich is handling the sale of the exquisite Elizabethan home, which stands in 16 acres of magical gardens, paddocks and woodland on the edge of the picturesque conservation village of Saxlingham Nethergate, eight miles south of Norwich and 14 miles from Diss. He quotes a guide price of £2.75m for the Grade II*-listed former manor house, which dates from the early 1600s, with later additions. The estate is much older, however, and previous houses have stood on the site — one of which was reputedly given to Anne of Cleves, fourth wife of Henry VIII, as part of an amicable divorce settlement.

Inside, the Old Hall is full of original character.

Set against a backdrop of mature trees and hedges, the house stands on high ground overlooking the 14th-century church of St Mary and concealed by trees from the early 18th-century Old Rectory designed by Sir John Soane. Built on a classic E-plan, with a northern service wing and a 20th-century extension to the rear, The Old Hall has been beautifully restored and remains largely unchanged in plan from its original construction.

Upstairs the principal bedroom suite has dressing, bath and shower rooms, while there are eight further bedrooms — including one with a four-poster bed pinched directly from a fairy tale — and three bathrooms.

If that sounds almost absurdly picturesque and enormous, you won’t be too surprised to hear that the place has fairly recently been operating as a sort of über-AirBnB. Top whack for a week’s rental in mid-summer is listed as £9,500 on the website, raising the prospect of this being a house that could, potentially, pay for itself. 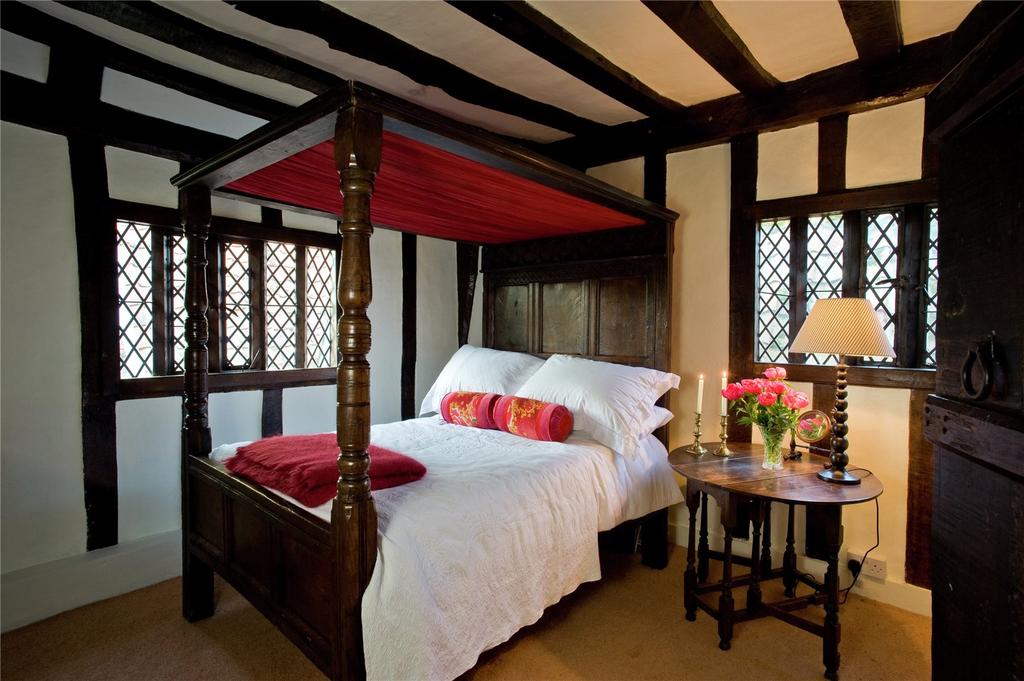 The grounds include a Spanish garden based on the Alhambra’s Generalife, a heated swimming pool and a hard tennis court, with an inner courtyard leading to the thatched poolside pavilion, an informal garden room ideal for poolside entertaining.

A range of period outbuildings could be connected to the main house to create a leisure complex, linking the house, pool and pavilion, and a traditional barn could be converted to a variety of uses, subject to the usual planning consents.

The Old Hall in Saxlingham Nethergate is for sale through Savills at £2.75 million — see more details and pictures.

Saxlingham Nethergate: What you need to know

Location: Around nine miles south of central Norwich, just off the main A140 which runs down towards Ipswich.

Atmosphere: A pretty Norfolk village of less than 1,000 people, yet with a primary school, pub, cafe and Indian restaurant. What more could you need? And if you said ‘shops and theatres’ then remember that Norwich’s delights are within 10 miles of here.

Things to do: This seems a busy and thriving village — there’s a scout hut, cricket club, village hall and so on — while the rest of Norfolk’s attractions are close at hand.

Schools: The local primary in the village is rated ‘Good’ by Ofsted, while Norwich has a selection of great schools, both state and independent.