We're all used to seeing amazing apartments in Britain's capital city – but London doesn't have the monopoly on amazing city living spaces.

Photographer Eric Howard bought this cavernous space in the centre of Bath and renovated it himself, using it as his studio, gallery and home.

It’s a vast room, 56’10” by 24’6″, and beautifully light thanks to the domes set into the 15ft barrelled ceiling and the windows all along one side – which include several rather unusual round windows that are a feature of this late-17th century building, Ladymead House, which backs on to the river Avon. The building also has communal gardens and 100ft of riverfront to itself.

The drama of the space itself isn’t all that The Ballroom has to offer, however: there are Egyptian marble tiled floors with under floor heating and a broken pediment feature wall which also doubles as a cinema with inbuilt Bose speakers.

And at one end of the room there is a Romanesque temple – well, why wouldn’t there be? – in which is tucked away the bedroom and en-suite wet room. The kitchen is tucked off in a small separate annexe at the other end (you can just see it in the picture above).

There is even guest accommodation of sorts, in the form of a small mezzanine level in one corner with a couple of beds. And if you’re worried about storage, there is also apparently a huge loft the size of the main space.

The Ballroom is on the market for £850,000 via Savills – see more pictures and details here. 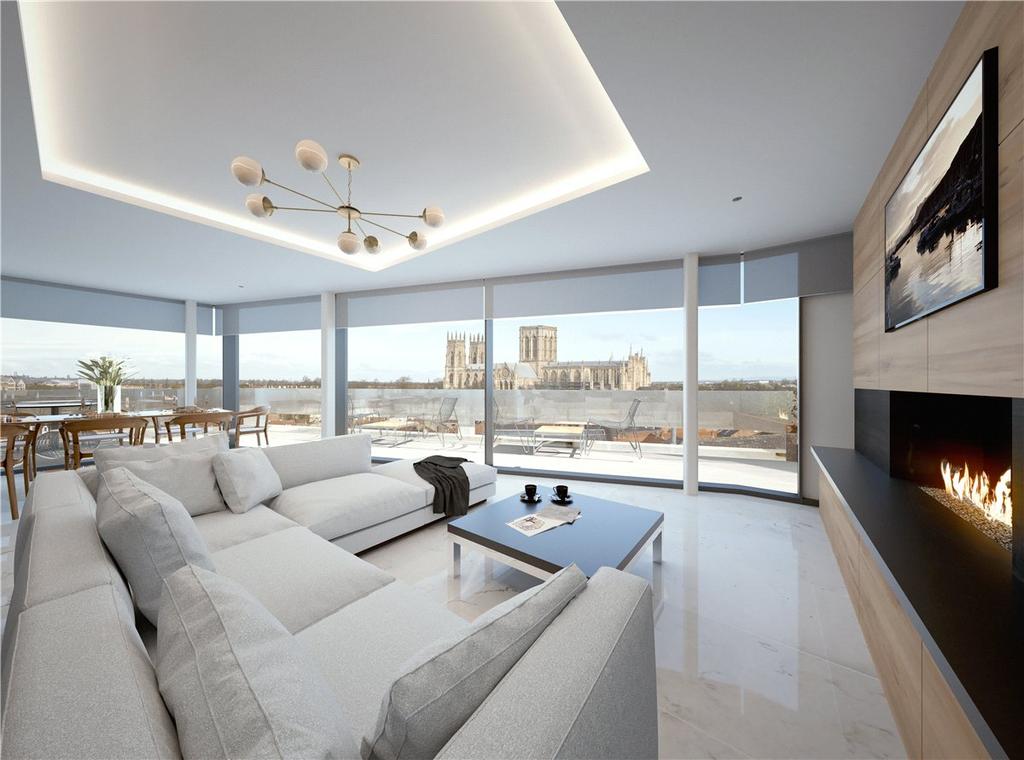 Stonebow House in the centre of the historic city of York is in the final stages of its transformation into spectacular flat – among which are four penthouses with spectacular views of the Minster, the sort of vista you’d normally need a light aircraft to enjoy.

With these huge glass walls, the views are truly spectacular while the interiors – designed by Rachel McClane – have clean, open designs which wisely allow the view to be the star of the show. 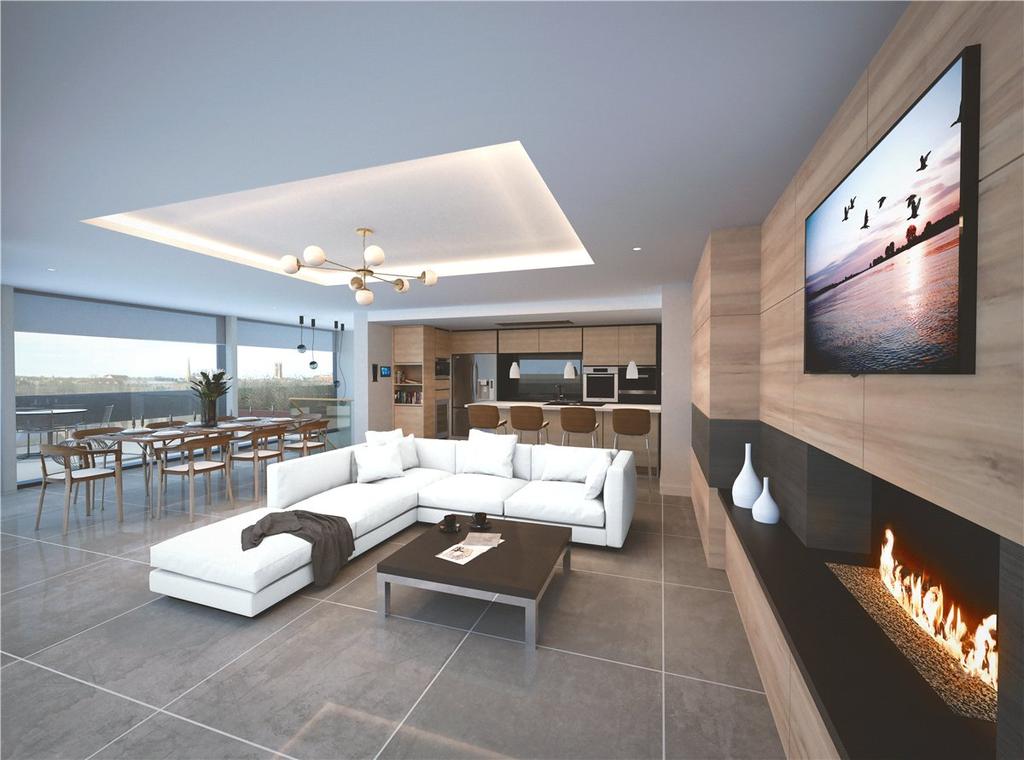 The building itself has many of the touches we’ve come to expect from such top-end developments: a stylish entrance lobby with concierge service, kitchens fitted by Watsons of Harrogate and bathrooms replete with Villeroy and Boch fittings.

Stonebow House’s four penthouses are for sale via Carter Jonas – price on application, but you can see more details and images here. 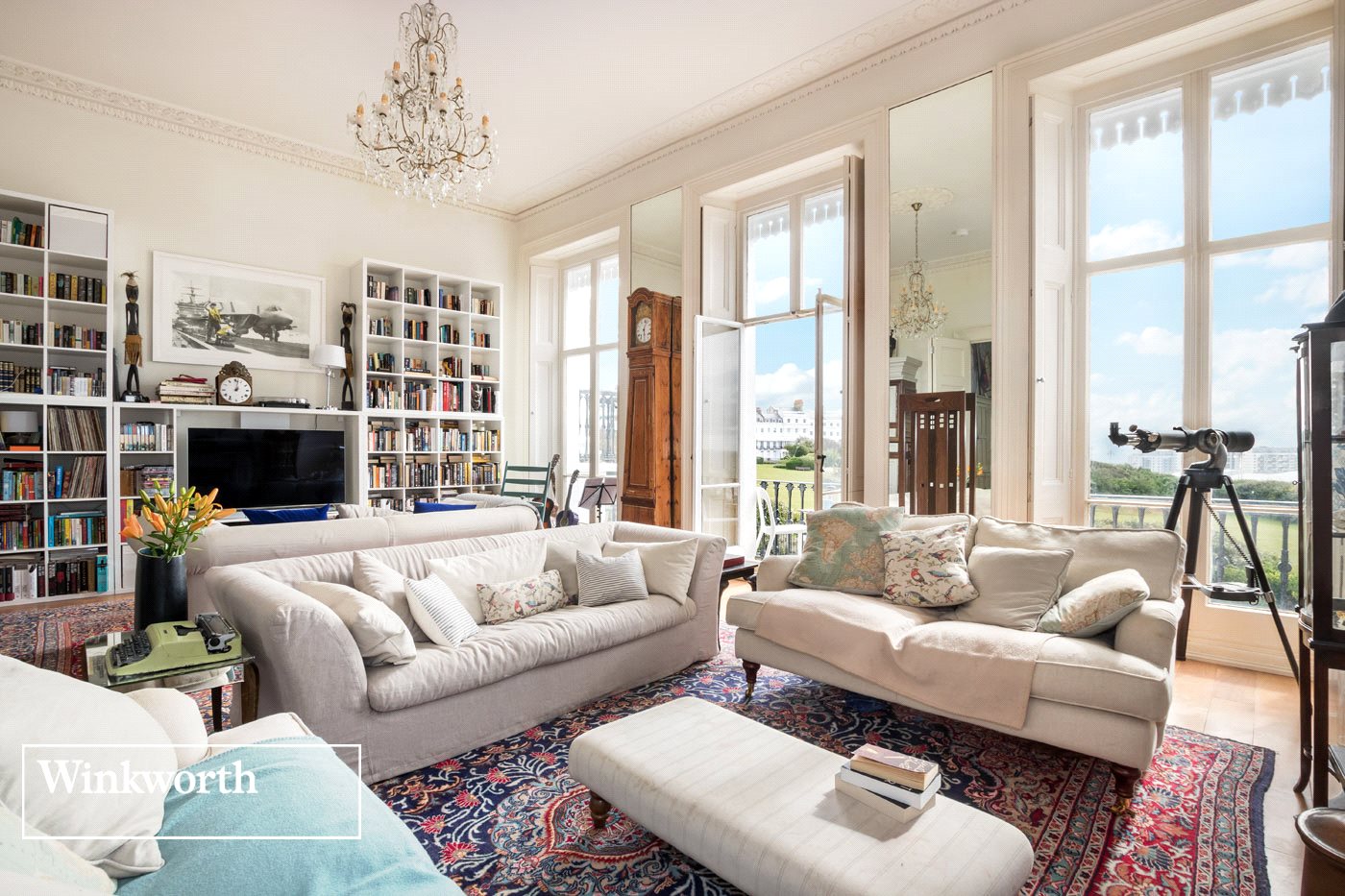 If the views of York Minster above don’t quite hit the spot for you, the views from this delightful Regency apartment in Brighton are are entirely different, yet just as beautiful. And the designers knew exactly what they were doing: there are full-height windows and huge french doors opening onto the balcony from where you can soak it all up. 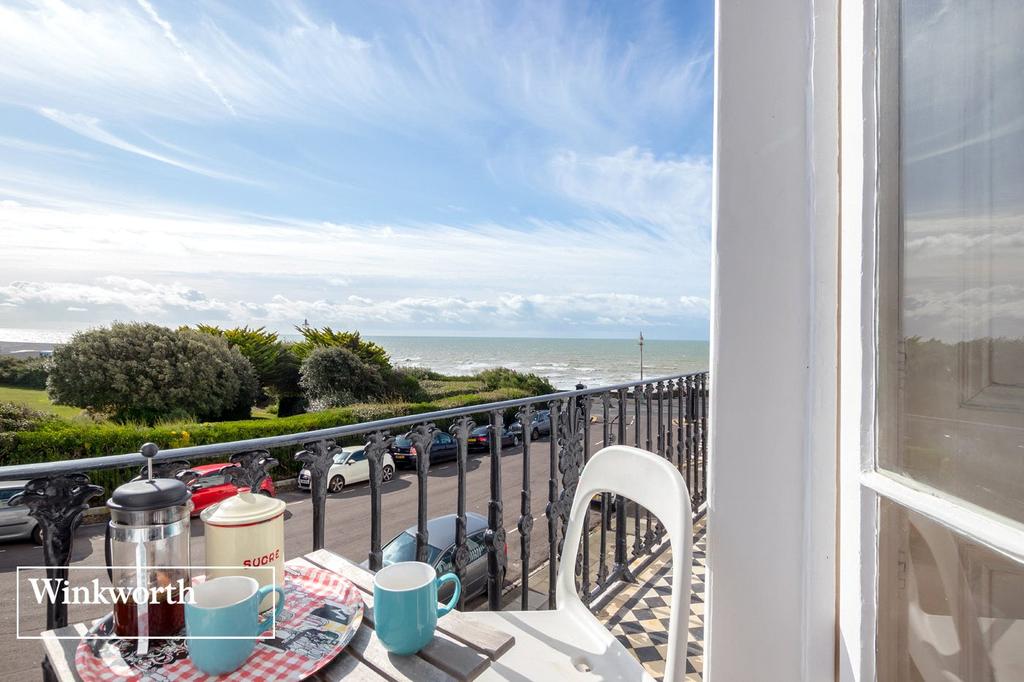 This first floor flat looks out over the square – and seven acres of communal gardens to which the new owner will have access – and out to sea.

The beautiful living room is the main selling point, but the flat also boasts four bedrooms (including an amazing master bedroom with en-suite and a dressing room) and a study-cum-workshop in the basement.

This lovely place is on the market at £1,250,000 via Winkworth – see more details and pictures of that view here. 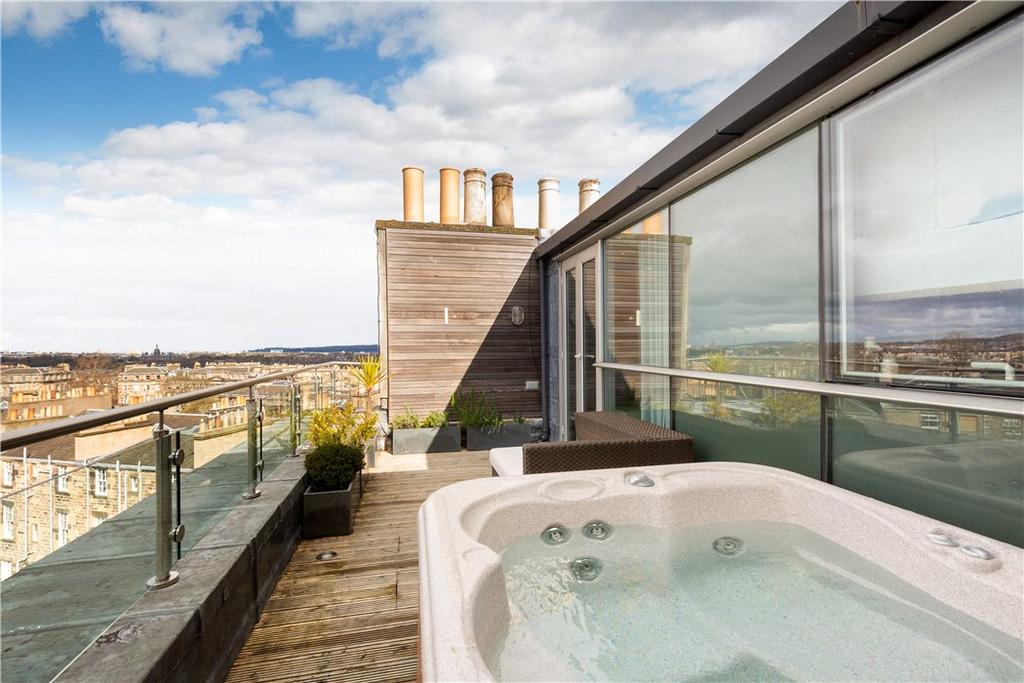 A jacuzzi on the terrace in the heart of Edinburgh’s New Town? Well, why not. Agents Knight Frank describe this as a ‘penthouse apartment without rival’ and a ‘unique property within the historic New Town’.

It’s a three bedroom place with large, light rooms from which the city is spread out like a living picture – the apartment is on the market at £1.7m. 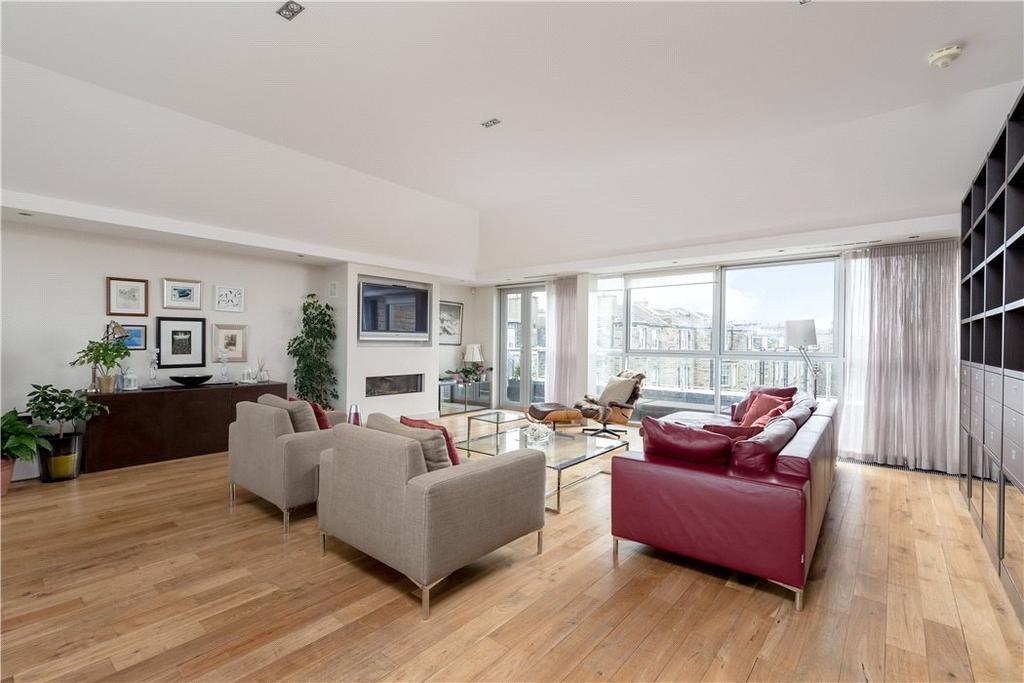 It’s not the only extraordinary penthouse on the market in Edinburgh, however: across town near The Meadows is this £2m place. 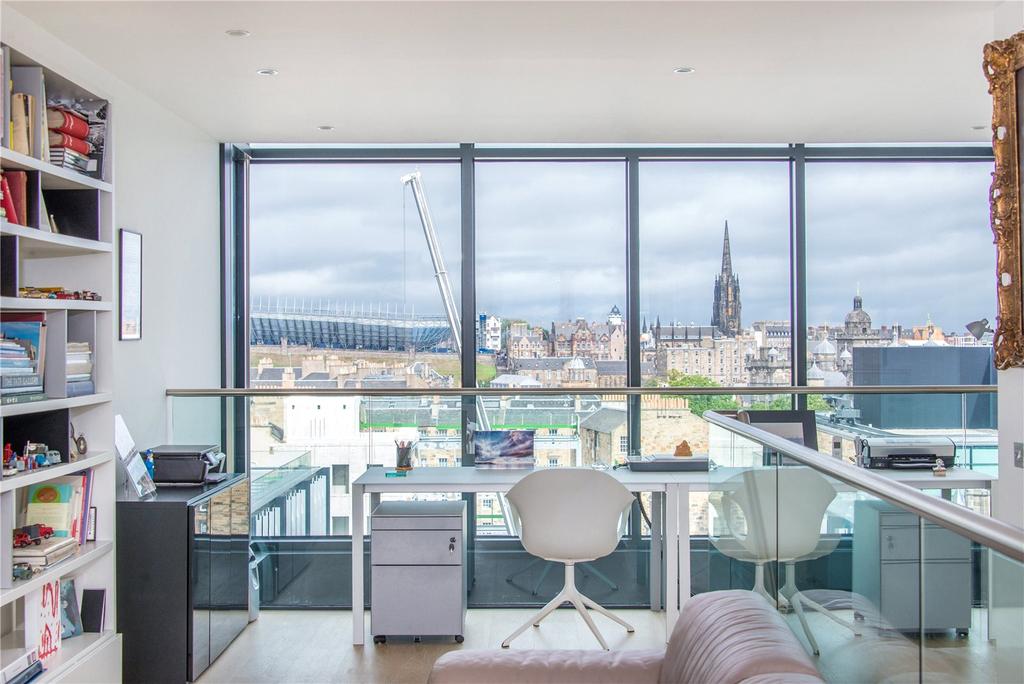 The building is newly erected to a design produced by Norman Foster’s practice, which has equally eye-catching vistas of this beautiful city and is better-located for those who’d rather be closer to the University. It’s on the market with Savills – more images here. 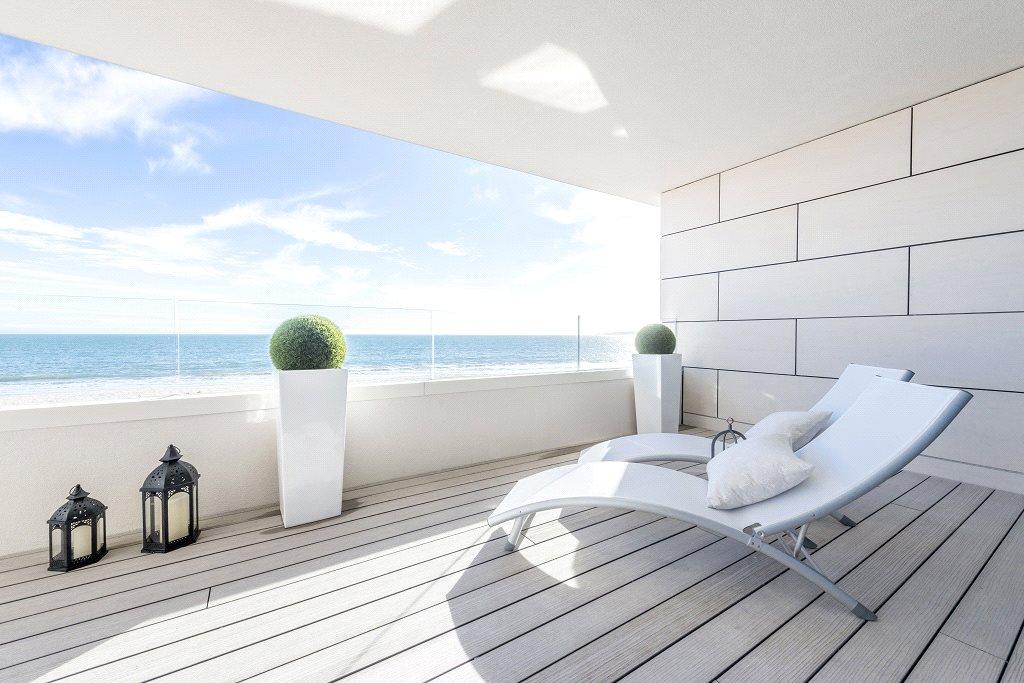 Dorset’s very own millionaire’s playground offers all sorts of options for those looking for a magnificent apartment – but this Frank Gehry-inspired building is the one that caught our eye.

It’s an apartment in a new building rather fancifully named ‘ACE’ – which somehow just makes us thing of classic 1990s sitcom Red Dwarf – that contains nine apartments, of which four are still for sale ranging from £2.2m to £3.2m. 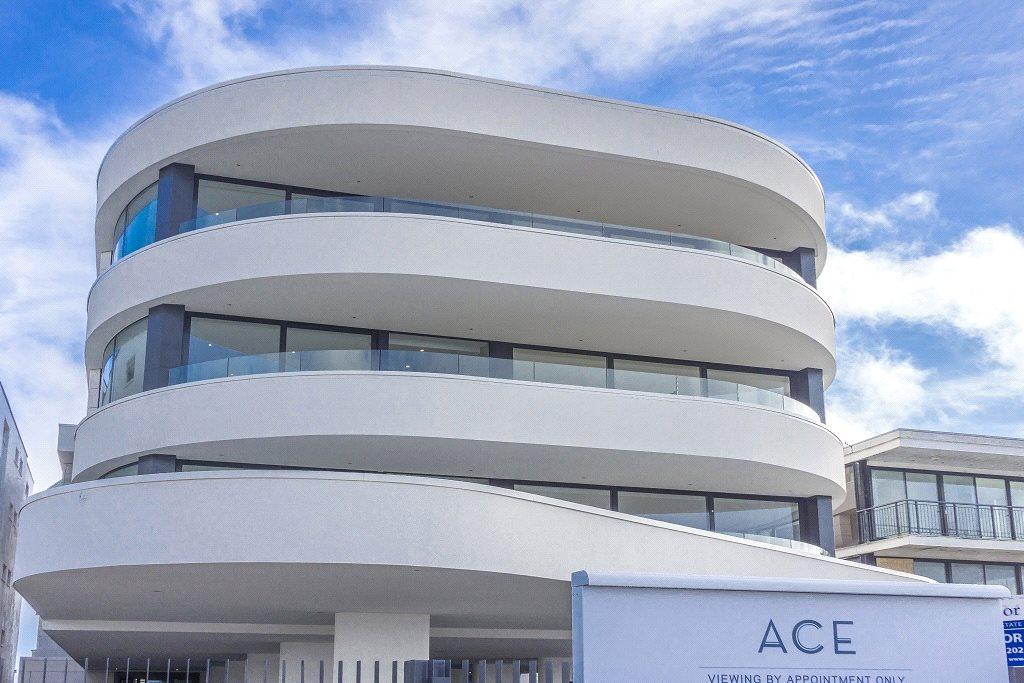 To be fair to the developers they follow through the design with their descriptive chutzpah: ‘Upon entering ACE there is an energy and flare ricocheting throughout the floors,’ they claim, before going to discuss more prosaic issues such as the underfloor heating and, er, smoke alarms fitted as standard. 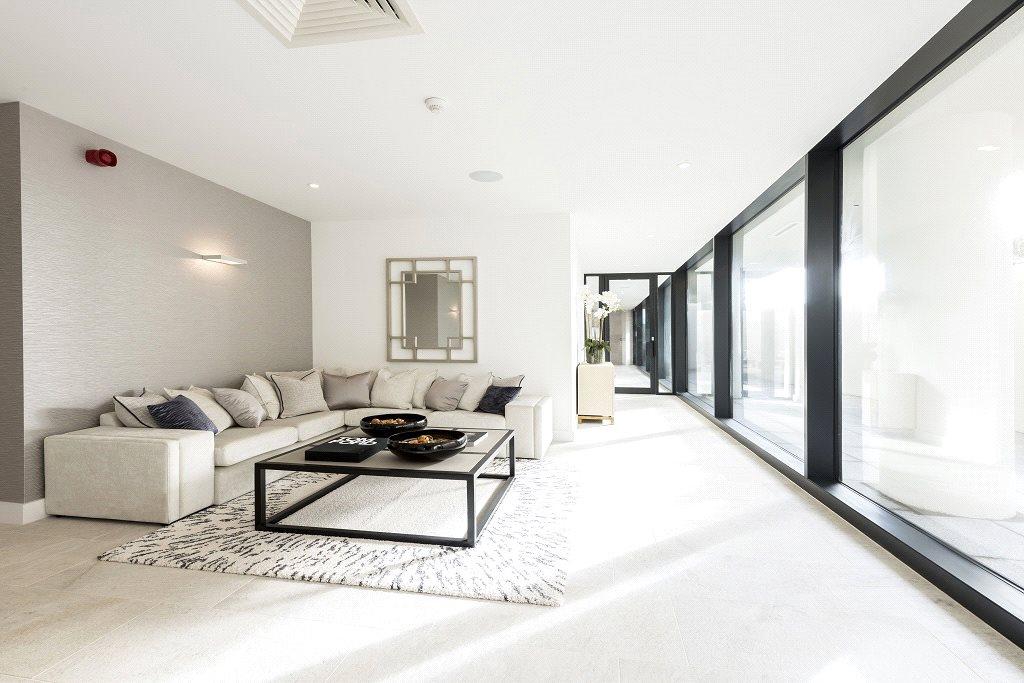 The apartments are on the market via Knight Frank, who have more details and pictures.

Sir William Playfair's Donaldson's is one of Edinburgh's great buildings, and was once mooted as a home for the Scottish Parliament. It's not a rather superb place to live. Credit: City & Country via OnTheMarket

If you're after the grandeur of stately home living without the maintenance headaches of managing your own little estate, these